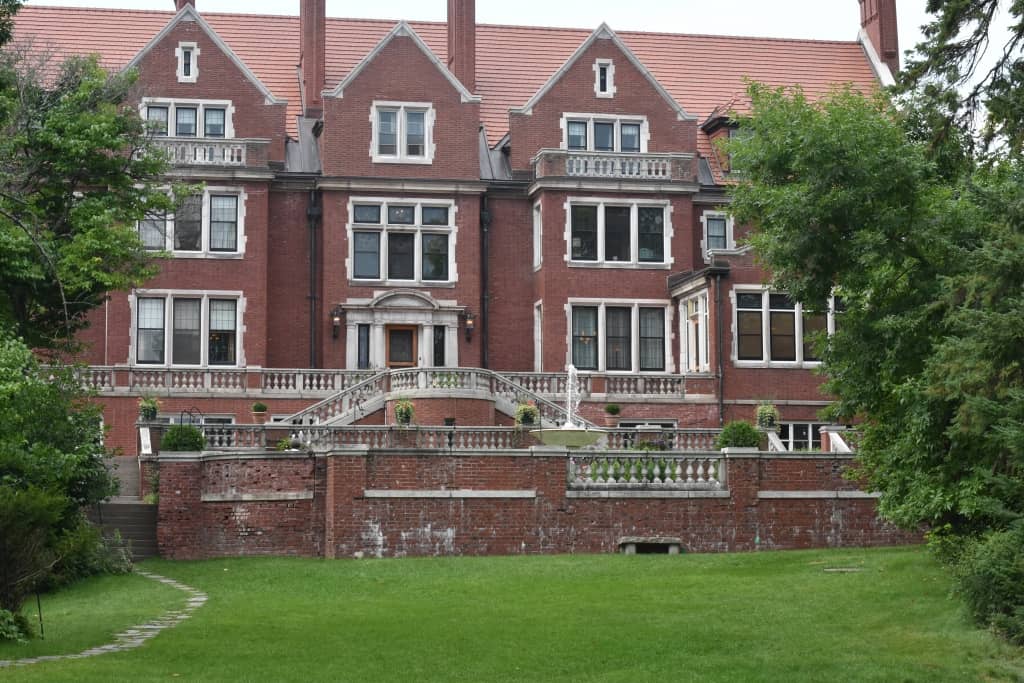 Quote of the Day: Webs are made mostly of spaces. They break easily. They barely exist. They belong to the category of half-things: mist, smoke, shrouds, ghosts, membranes, retinas or rags; and they quickly fill up with un-things: old legs and wings and heads and hollow abdomens and body bags of wasps. Alice Oswald 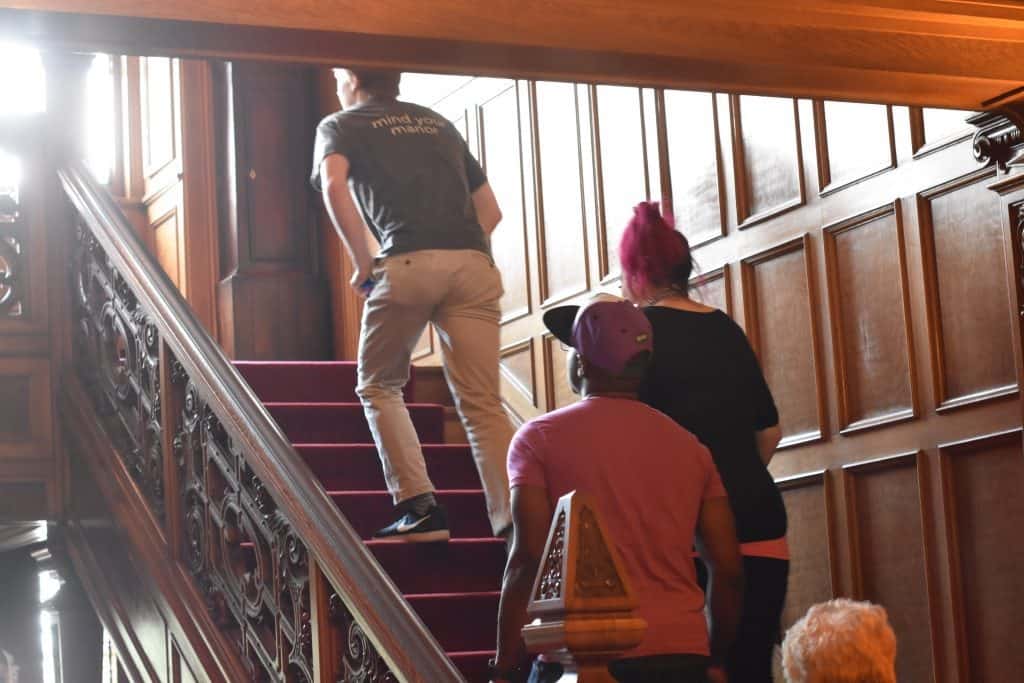 We toured the Glensheen mansion in Duluth, MN this August, and I believe there might be a cobweb or two in and around this place, both literally and figuratively. It took me a long time to find a quote to start this post. I looked up “Rags to riches” because certainly that is the story of Chester and Clara Congdon who both came from poor preacher’s families, but through education, opportunity, and ambition, became one of the wealthiest families in Minnesota. They built this mansion, which took three years, and moved into it in 1908. I looked up “Greed and keeping the good family name” because family reputation lead to numerous bailouts of a certain family member. Somehow, I stumbled on the quote, above, about the web. And, oh the tangled web of family, deception, manipulation, greed, and sociopathic behavior. It’s all there. 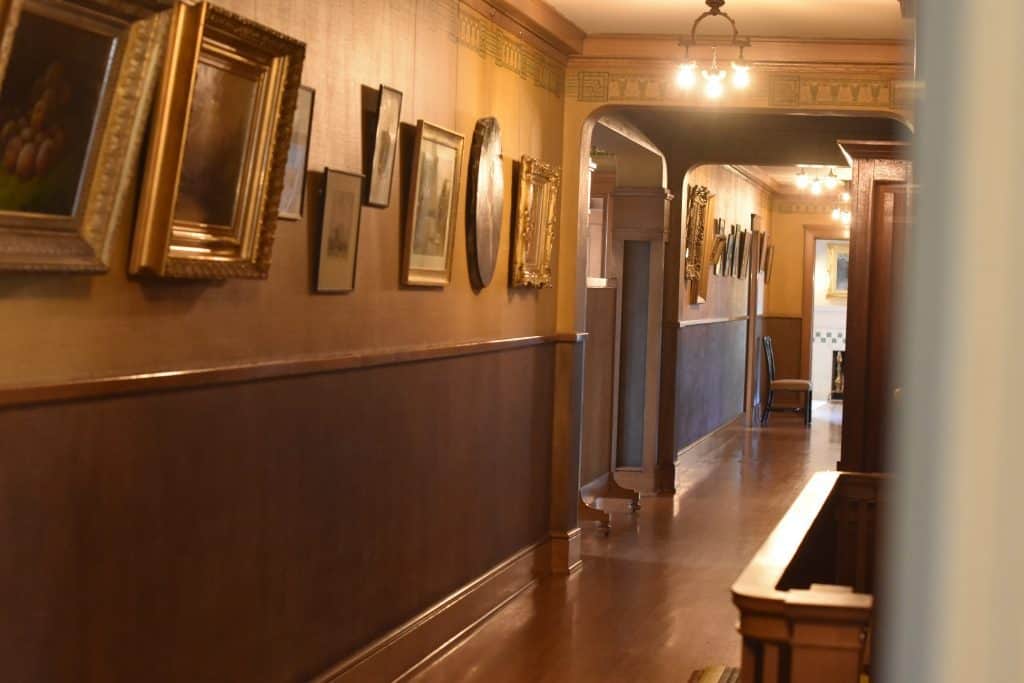 Chester and Clara Congdon had seven children of their own, and they took in Clara’s nephew Alfred when he was suddenly orphaned. They didn’t formally adopt him because Clara wanted his family name, Bannister, to continue, but they built him his own room and treated him like one of the boys. The third floor of the mansion has only recently been opened to the public. We took the Full Tour, so we could see this floor and the attic. I toured the mansion years ago with my parents back in the 80’s. I didn’t remember much about the tour, but the mystery of the murder was still fresh in people’s minds. The staff doesn’t talk about the murders during the tour. They really want to highlight the historic significance of this house and the generosity of the Congdon family. The third floor of the mansion was for the boys, and it also included a sick room (pictured above) with a removable bookcase, that looks like the entrance to a secret passage, but the tour guide (Zach) said it was movable so they could place it between the two beds. They used an internal intercom system throughout the house. This one is above one of the beds. 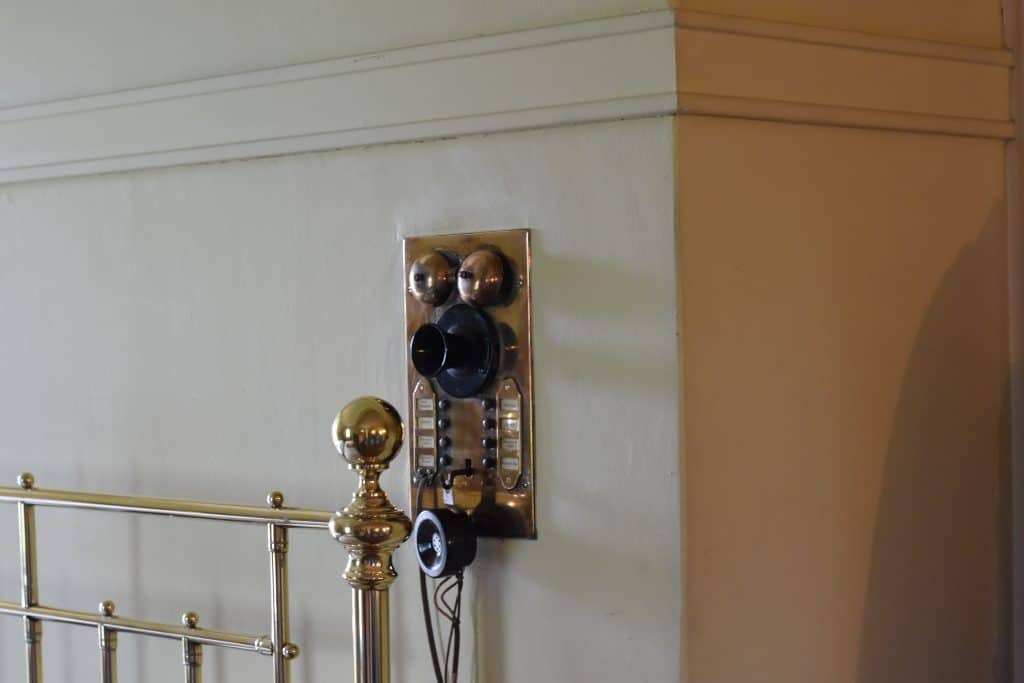 We were allowed to walk through all the boys’ bedrooms. The room at the end of the hall was for married guests. It was a suite with a little alcove and writing desk, it’s own fireplace and sitting area. The guests would have shared a bathroom with Robert who had his room next to theirs. 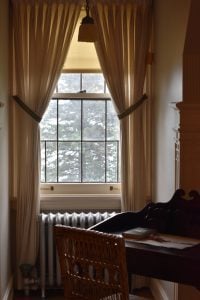 Originally it had stenciling along the boarder of the ceiling, but a short-sighted director of the mansion had it painted over in oil based paint, which is extremely difficult and costly to remove. 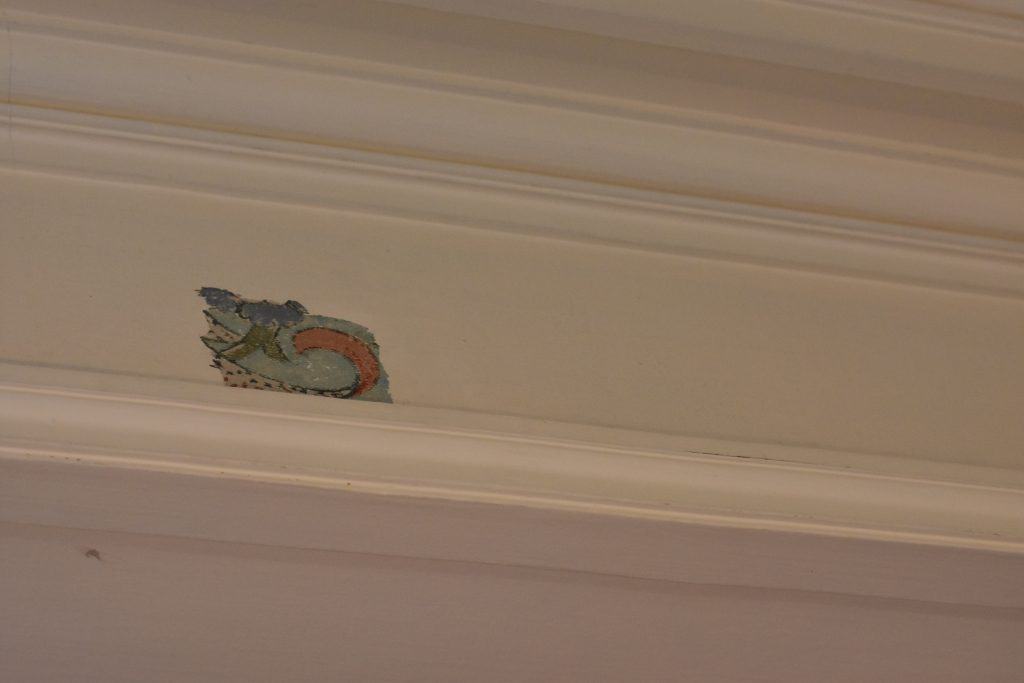 Small section of the original stenciling in the guest room at the Glensheen mansion. It took 8 hours and hundreds of dollars to reveal this tiny swatch.

The house is owned by the University of MN Duluth. They did a great job of displaying the home the way it would have looked when the family moved in, around 1908. The boys’ rooms had special things to show their interests and personalities, and the colleges they attended. The oldest boys were already in their 20’s when they moved to this home on 3300 London Road, Duluth, MN. The oldest son, Walter, had a hidden gun case in his room. Both boys had balconies off their windows, facing the lake. They didn’t have doors to step out onto the balconies, but the scuff marks on the windowsills indicate they found another way out there! The boys’ den, third floor of the Glensheen Mansion

From there, we went up to the attic. Mostly, it’s storage, but an attic is full of treasures, (the literal cobwebs are here along with old rugs and furniture). The Congdon children are said to have played up here. Zach showed us how thick and solidly built the Glensheen mansion is. It is somewhat fireproof, as the walls between the rooms have concrete and cinder blocks. Almost every room has a fireplace, and certainly house fires are a concern, especially when you know a little more about a certain family member. However, Zach told us that if a fire broke out in one of the rooms, you could shut the door to that room and it would be contained there. The attic of the Glensheen mansion in Duluth, MN 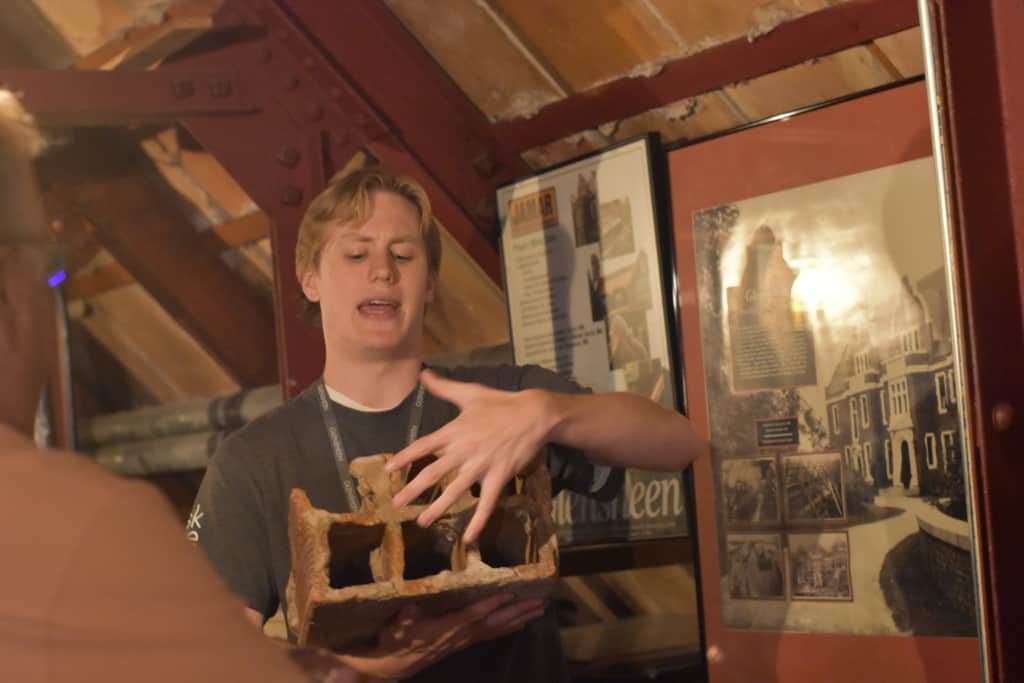 Tour guide Zach showing us the blocks that are inside the walls of Glensheen. The interior, up here, looks like the inside of a ship! I think these two would have had fun playing hide and seek up here with their friends!

After the third floor and attic tours, Zach brought us back down to the main floor and told us to explore the second floor (for the girls, parents, and servants), the main floor, and the basement (or ground level) at our own pace. I got a little turned around from climbing the stairs, switch-back, and looking out windows, but you can get a floor plan guide, although, it doesn’t include the third floor. We toured half of the main floor, then went back upstairs to explore the second floor. They have guides (who are mostly UMD students) sitting in each room to make sure we don’t touch anything we’re not supposed to touch, or cross the velvet ropes, and they also answer questions. The only question I asked relating to Elisabeth (the murder victim) and her adopted daughters was, “Which rooms did the girls occupy when they were growing up here?” The girl we asked didn’t know. And, I asked if Helen’s former room was the one that Elisabeth had as an adult. Yes. She was a young girl when the family moved into Glensheen. She occupied a room facing the streams, out front, but moved to the lakeside when Helen left the house. Her night nurse, Velma Pietila, who was also murdered on that fateful night of June 27, 1977, stayed in Elisabeth’s original room which had been changed to the nurse’s room when Elisabeth was older. I had creepy feelings in both these rooms, as well as the main staircase. 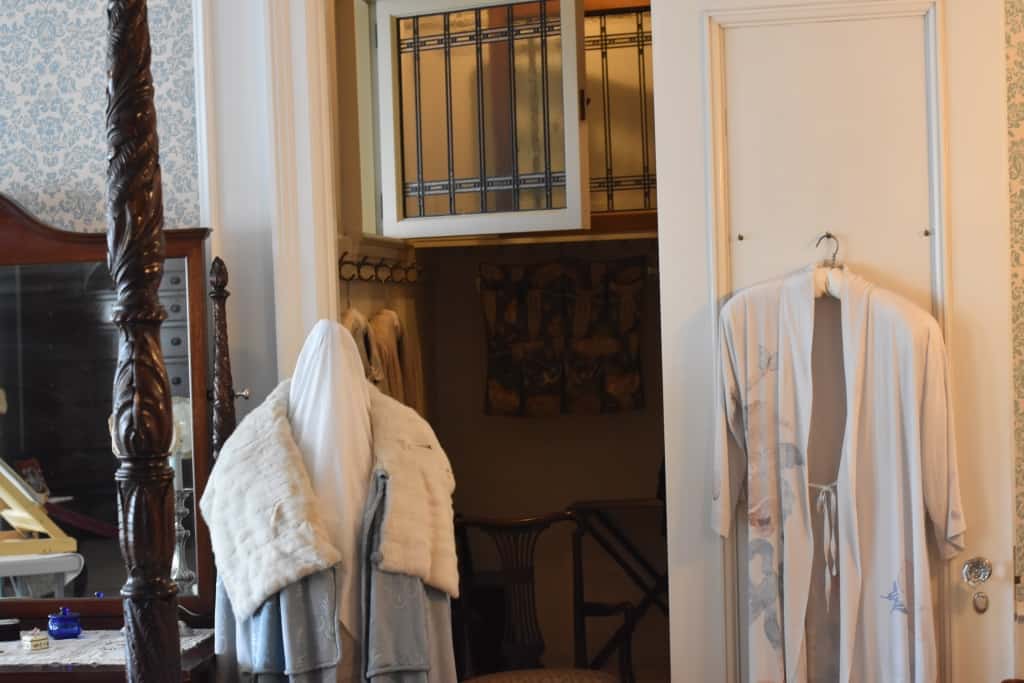 Elisabeth’s sister Marjorie’s room. The windows open from the lake, through the bathroom, and into the closet for natural air conditioning. Duluth can be very cold in the winters, cool in the spring and fall, and even summer days with the breeze off the lake. However, we do get a few hot & humid days. I’m sure the boys were hot up in their rooms. Maybe they slept in the rec room on the ground level during the hottest days of summer? I think the clothes hanging here give a ghostly impression. 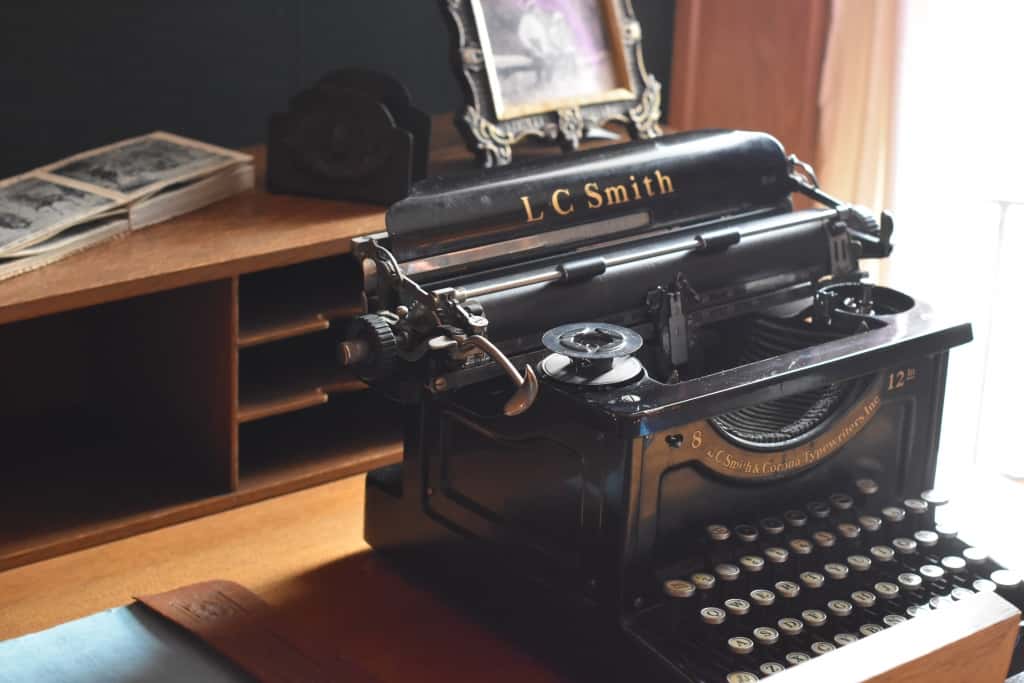 One of the boys was a writer. Love his old typewriter! The Congdon’s loved to travel, and had several homes, so they had their bags packed and ready to go at a moment’s notice. Fun to see these old letters and stamps, even a telegram, correspondence with the Congdon family. 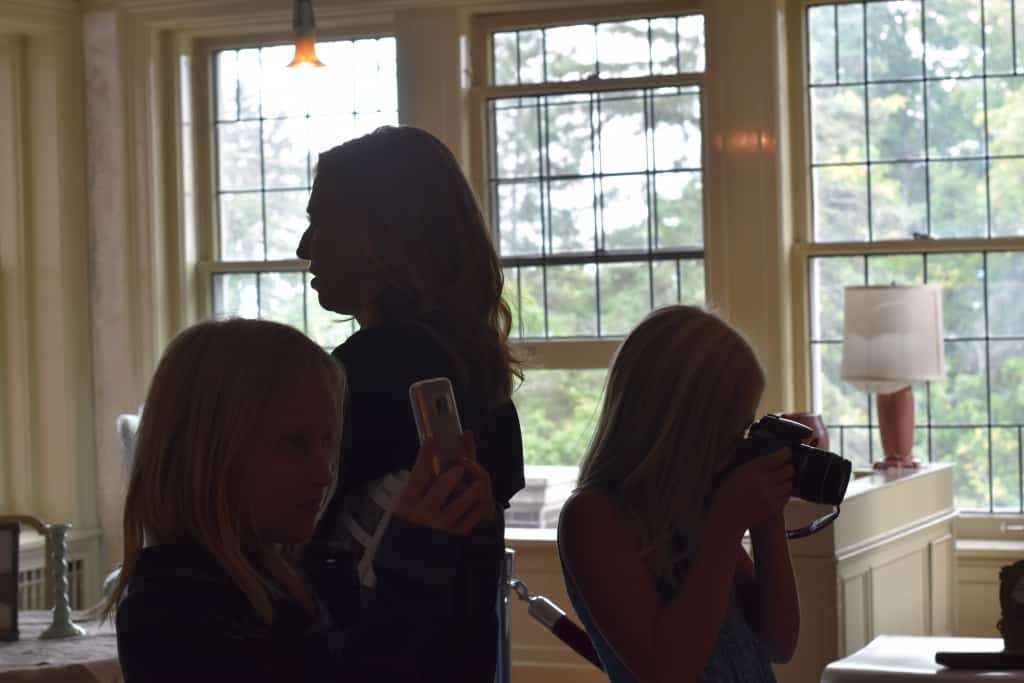 We paused a moment in Elisabeth’s room, bright and cheery by day, decorated in pinks, light greens, and white, the windows open for a breeze off the lake. One dark and sinister night, it had a very different atmosphere. We couldn’t resist being a little dramatic and whispering about the murders as we explored this historic mansion. Of course, they want to highlight the family in the good days, but they also know that a certain percentage of the people touring the mansion are curious about the murders that happened here. It didn’t feel haunted or too creepy during our tour, but the Flashlight Tour might be a different experience! I might go back someday and try it. I imagine it’s popular right around Halloween! Congdon pantry with crates and signs from the Congdon orchards. This post is getting long, I know, but the history and mystery of the place is equal to its size. We enjoyed our tour, both the guided part with Zach (who did a great job), and the self-guided part, as well as imagining both the highlights of the family as they were in the 1920’s and into the 1940’s. Some of them died rather young. Elisabeth outlived all of her siblings and was the only one to occupy Glensheen until the day she died. She raised her two adopted daughters, Marjorie and Jennifer, there. The place saw weddings, parties, celebrations, family life, joyful antics, races in the subway (ground floor), hide & seek from basement to attic (it must have taken hours to find everyone), and one horrible, brutal crime that left two people dead.

To read more about the murders and the people involved, check out Will to Murder by Gail Feichtinger (reporter) Prosecuting attorney John DeSanto and Detective Gary Waller. The bazaar behaviors and details might leave you reading with your mouth hanging open, as it did mine, exclaiming, “No way!” and reading passages out loud to the people in the room with you. Also, Glensheen, the Musical, written by Minnesotans Jeffrey Hatcher and Chan Poling, offers more light on the history/mystery. You can read my review on Play off the Page here. I thought this was a humorous item to sell at the gift shop. I wouldn’t eat the marmalade!

Journaling Prompt: Do you have a mystery/history place where you live? Do you know anything about the murders at the Glensheen mansion? Do you know which rooms Elisabeth’s daughters occupied when they were growing up there? And, who eats the vegetables in the garden on the grounds? Review of The 39 Steps at Lyric Arts Review of Man of God by Theater Mu