Review of The Cocktail Hour at The Guthrie

Quote of the Day:  Watching this show makes me feel better about my own family, said a fellow audience member during intermission of The Cocktail Hour, playing now at The Guthrie Theater in Minneapolis, MN through January 4, 2015. And, yes, you might feel a connection to your own family’s cocktail hour, dynamics, and interactions, for better or worse. It’s all relative. 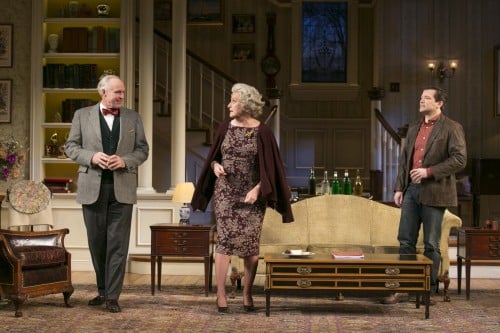 This is a nice shot of the set for The Cocktail Hour, by playwright A. R. Gurney, set by James Youmans. A woman who sat down behind me remarked, “Oh, I love plays with settings like this.” I thought, hmm, what are “those plays?” They are the ones where you sit in the audience and feel like you’ve been invited into someone’s living room. You half expect the hosts to turn to you and ask, “What would you like to drink?” (The Chef and I came in with our own cocktails in honor of the show’s title. Drinks are allowed in the theaters at the Guthrie.) We quickly find ourselves listening in on the private conversations of the family. Do you see the red book on the coffee table? It’s John’s new play script. Mm hmm. He’s come home to get his parents’ approval to have it produced. Although the names are change, it is a representation of their own family, it’s private and not so private interactions. The set-up is great, because you have Mom and Dad, older and uncomfortable with their playwright son who might expose too much. You have the favored older brother, who is in the play by name and admiration only. And, you have the dramatic sister who feels that she should have played a more prominent role in the script, and family, instead of always being the supportive cast member. (You will note that in the above picture, she is not included.) The audience burst out in laughter during many of the scenes. They were especially loud when Mom and Dad talk over each other and the kids look on, shaking their heads. We cringe a little as John has those intimate scenes with Mom and Dad, trying to extract the truth behind their behavior. They discuss the difference between T.S. Eliot’s play The Cocktail Party and John’s script The Cocktail Hour. “They’ll get them confused,” they say. No, they’re different. A cocktail party is social. Cocktail Hour is for the family. Ah.

The Cocktail Hour is for anyone who has ever been in a family and wondered where or how they fit in. Some people feel like they are so different that they must be a foundling, adopted, or somehow not the real child. Some feel overlooked. Some are presumed to be the favored one. And, everyone searches for acceptance. The Cocktail Hour is a humorous, and thoughtful, look at how families interact. This is a great show to watch with a sibling, other family members, friends or a significant other because you can’t help but talk about your own family dynamics, whether you had a traditional cocktail hour, or other traditions where you found everyone had a role, whether they wanted it, or not.

Enjoy a cocktail of your choice as you watch this story develop. You can discuss later if this family is more, or less, dysfunctional than your own. And, in the meantime, you’ll have a great night out with someone you care about, and those are the best gifts for the holidays, or anytime.

The Cocktail Hour and A Christmas Carol are both playing at the Guthrie Theater this holiday season. Visit their website for tickets and showtimes. Have a happy holiday season. Watch the eggnog intake, and keep your cool with the in-laws!

Journaling Prompt:  What’s your favorite beverage for cocktail hour, or when you just want to relax? What’s your role in the family dynamics?