Quote of the Day:
I know it is wet
And the sun is not sunny.
But we can have
Lots of good fun that is funny! Said the Cat in the Hat, as he entered the house. From the book by Dr. Seuss, originally produced by The National Theatre of Great Britain, playing at The Children’s Theatre Company in Minneapolis, September 25 – December 2, 2012, Tickets $10-$67. Cat in the Hat played by Dean Holt
Well, they let him in, and now they seem rather suspicious, don’t they? I was wondering how he’d be able to balance all those things! Fish played by Gerald Drake.
I thought he was so great as a puppet and how he looked, dressed, and his facial expressions. He is exactly how I pictured the fish to look if he were in human form! The Cat in the Hat plots to bring in more characters to make more fun that is funny! Or, is it? Ask the fish and he’d say, “They should not be here when your mother is not!” With the Cat in the house and Thing One (Elaine Patterson) and Thing Two (Noah Crandell) out of the box, the energy really picked up as the house fell apart! The Cat held up these kites, and Thing One and Thing Two licked their chops with eager anticipation.
After they’d torn up the house with all their running and kite-flying, the Boy got his net and caught them, telling the Cat, “Now you do as I say. You pack us those Things. And you take them away!”
At that point, the little girl in front of us started sobbing for poor Thing One and Thing Two. Her daddy had to take her out for a minute. The girl behind us said, “It’s okay. It’s only a show. They can come out later if they want to.” Those kiddos are right there, fully engaged, and feeling sympathy for those naughty Things. 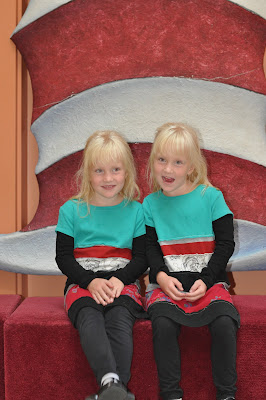 The twin girls we brought to the show were licking their own lips in anticipation of seeing The Cat in the Hat. They stood up and watched. They giggled. They put their hands to their mouths with worry, and they gave the show four thumbs up, saying “We loved it!”
Come back tomorrow to see all the fun we had after the show.
Go. Create. Inspire!
Journaling Prompt:  Have you ever felt like Thing One and Thing Two had been let loose in your house?