Review of The Magic Flute at the MN Opera

Quote of the Day: May the music protect through the flood as it did through the inferno.  from Mozart’s The Magic Flute, playing now at the Ordway Performing Arts Center in St. Paul, MN, a MN Opera production, and what a grand production it is. It is like Tim Burton meets Mozart on a 1920’s silver screen. The staging and theatrics of this production is the most fascinating that I have ever seen. Here you have the gorgeous classical opera The Magic Flute, written by Mozart in 1791 brought to life by the extremely talented musicians and singers of the MN Opera, all on the backdrop of a large screen where the actors pop out on tiny platforms, at various heights, and sing and interact with the images going across the screen. At times, it is like the silent movies, where words appear along with the images. The singers react to what is happening on the screen as well as to what they’re singing and the other performers. Sometimes, the images are in black and white except for a few that are highlighted with color, like when the young boys sing to Pamina, they are butterflies, then she turns into a butterfly. The Queen is a large spider, complete with long, spiky legs that look like they will pierce poor Tamino. It was a visual feast! 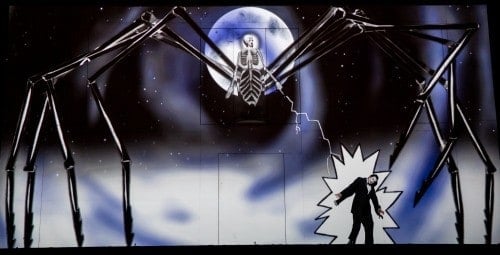 The Queen of the Night (Jeni Houser) sending her terror down on Tamino (Julien Behr) MN Opera, The Magic Flute, November 2015. Photo by Dan Norman

If you’ve ever wanted to check out opera, or introduce young people to this art form, bring them to this production of The Magic Flute. I brought two young adults, and they said it was fascinating, fun, and cool. The English translation ran above the stage, and some words appeared on the screen, some in German, and a few in English. During the fight scenes, they projected “Bam!” and “Pow” like in the old Batman shows. They also had bubbles rising up from champagne glasses and dancing elephants. That particular scene reminded me of Disney’s Fantasia, which exposed children of all ages to classical music to the backdrop of animation. 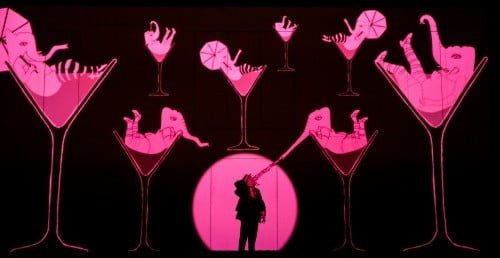 There are also dark images in this production of a large, devilish man with spinning eyes and a disk in his chest that reminded us of Ironman. They are brought to the dark underworld, and skeletal images cross their paths. The Queen tells her daughter, who has been captured by Sarastro that if she doesn’t kill him, she is no longer her daughter. 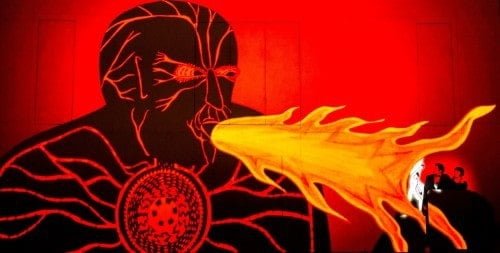 For the people who don’t know the story of The Magic Flute, here’s my interpretation. In the opening scene, Tamino is wresting a serpent. Three sisters (witches? fates? women in service of the Queen) intervene and save him. They all want to be his lover, and have a humorous song about winning his heart (complete with hearts floating out of them and down to him, and popping just before reaching him). Tamino comes to and observes the goofy Papageno catching birds and thinks that he saved him. The three women show Tamino a picture of the Queen’s daugther Pamina. Tamino falls in love with her and says yes when the Queen asks him to go save her from Sarastro who has captured her and set Monostatos to guard her. He is an evil creature. 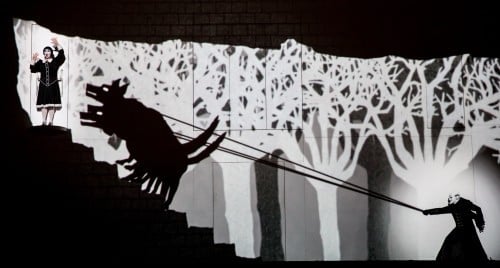 Tamino (Julien Behr) is the hero (Prince) who must undergo challenges and pitfalls, search his soul for what is the truth, and find strength in himself and through the Magic Flute which he is given to help him in his quest.

Pamina (Christie Conover) is the lovely damsel in distress, and yet, commanded by her mother to kill Sarastro and save herself, even though her mother, The Queen of the Night, has sent someone to rescue her.

The Queen of the Night (my favorite character) is manipulative, strong, beautiful, and sets the story in motion. Jeni Houser, who sings her part, is so perfectly talented that I practically wept when she sang. In the song that hops around on the high notes (that most of you would recognize if you heard it, the aria “The Pangs of Hell”), she sounds like the flutes that accompany her. (I stood at the curtain call when she came out, one of the few to stand up early for what was a grand standing ovation.)

Papageno, a Birdcatcher, (John Robert Lindsey) is the jester, or comic relief. He was delightful to watch. We were close enough to see his facial expressions, and his body language also caused a chuckle. He is told that he must go on with the quest with “no speaking, no women, and no food.” He fails at all three. We all loved the song that he sings with his much sought after girlfriend Papagena (Tracey Engleman), where they sing “Pa, pa, pa, pa” to each other and imagine a house full of children – to a ridiculous degree!

Sarastro, the High Priest of the Sun, was the character we were all a little unsure about. Was he good or evil? He was a little of both, as most of us are. He has his own needs and agenda. He puts Tamino to the test, yet offers words of encouragement. When Pamina is contemplating killing him, she is surrounded by men in dark clothes who sing of offering mercy and preserving life. Benjamin Sieverding sings this part with his rich, bass voice, that trembles deep inside you. He was dressed all in black and had a long beard.

Monostatos (John Robert Lindsey) was pure evil. He seemed more like the Devil to me. He visits Pamina in a bedroom scene that gives you a chill as black hands creep across the screen, and he sings of having needs although his is ugly both inside and out.

The chorus sometimes took me by surprise. At one point near the end of Act I, I heard them, but didn’t see them right away, as they were at the sides on different levels of the theatre behind a smoky scrim. The entire production, from each gorgeous note played by the orchestra to the ones sung by the enormously talented opera singers to the fascinating images on the screen was a evening I’ll never forget. Thank you, MN Opera for bringing this production to us! Maybe someday we’ll be like the gentleman at the end of our row who said, “I’ve had these same seats for more years than I can count.” While these veteran theatre-goers weren’t sure if they’d like this new take on a favorite classical piece, they could see how it appeals to the younger audience members who are very visual. The screen animation was designed by the company 1927, who spent over three years hand drawing the images for The Magic Flute. I will definitely try to see more work by them!

I hope you get a chance to see a production like this some day. It might be out of your usual entertainment experiences, or you might be a life-long fan of the opera. Either way, this production will give you something new to experience and enjoy! I would bring kids as young as elementary school to this Opera. It is just over two hours long, has many fascinating visual effects, English translation above, and a whimsical cat. Why not give opera a try?!

MN Opera’s The Magic Flute is playing at the Ordway Center for the Performing Arts in St. Paul, MN November 14-22, 2015.

Journaling Prompt: Do you go to the opera? What is your favorite fairy tale?