Quote of the Day: from a play based on the movie starring the Marx brothers, adapted by Mark Bedard, who also plays Groucho in this production, originally performed at the Oregon Shakespeare Festival, February 2014.

Groucho: Do you want a suite upstairs?
Chico: No, I want a Norwegian and a Finnish basement. 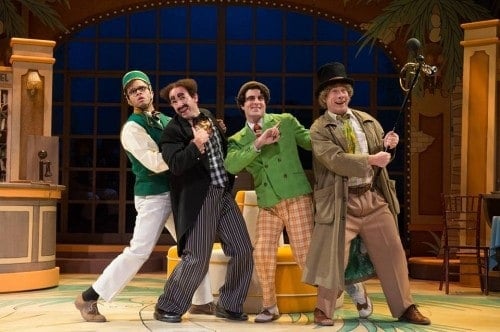 And, these are the kinds of jokes that are constantly slung at you during the performance of The Cocoanuts, playing now at the Guthrie Theater in Minneapolis, through January 3, 2016. The following are a list of ingredients for a successful musical comedy: Writing by George S. Kaufman, Music by Irving Berlin, Comedy of the marvelous Marx brothers, a “bum hotel” on the Cocoanut Beach of Florida, A rich dowager, her love struck daughter, the bellhop she’s pining for, a pair of con-artists, a red-beret wearing band, and plenty of slapstick. Oh, and don’t forget the audience participation! While this is clearly scripted (the movie came out in 1929) Mark Bedard (Grouch0) and his band of brothers, and sisters, play off the page, reading and reacting to the audience. The lucky folks who got to sit at the tables down front had their share of antics played on them. (If you find yourself up front, make sure your purse is fairly well cleaned out! And, you may as well leave your cell phone on, ringer turned off.) Our Midwest audience particularly loved the references to lutefisk and Joe Dowling! 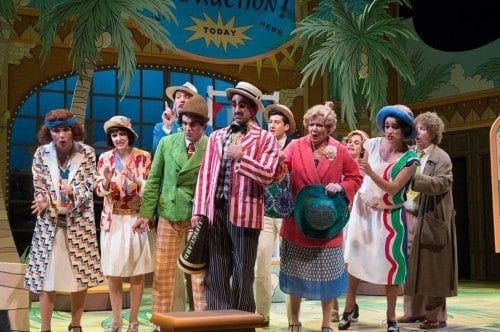 Cast of The Cocoanuts, playing at The Guthrie Theater in Minneapolis. Photo by Jenny Graham

I brought my best piano mom Rachel to this performance, her first time in the new Guthrie Theater. We had a blast! We started out with dinner at Kindee Thai restaurant, a favorite of mine, across the street from the Guthrie. I can’t resist their yellow curry. We laughed our heads off at the show. At intermission, we both said that it would be fun to come back later in the run to see what they do differently. In an article in the Minneapolis Star Tribune by Graydon Royce, quote from actor Jim Cunningham who played Groucho in a 2003 production of the same play at the Illusion theatre, The challenge, Cunningham said recently, is to obey what he called “both the letter of the law and the spirit of the law” in portraying the manic brothers.

“But the bigger thing for me was to give the audience that sense of something that was happening right now. What drove people to [the Marx Brothers] was the idea that on any given day you could see something that no one else would see. That’s the spirit of the law.”

Bedard and the show’s director, David Ivers, totally get that. 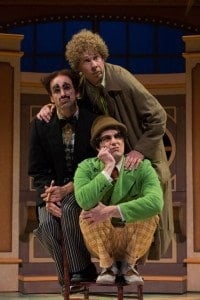 Harpo (Brent Hinkley), Mr. Hammer/Groucho (Mark Bedard) and Chico (John Tufts). Photo by Jenny Graham (How did they all balance on that chair!?!)

I agree. There was enough script to keep it all together, and enough improv to make us feel like this was a performance unique to our experience that night. The people behind me laughed often and said out loud, “This is so funny.” I felt this surge of delight from the audience when Mark Bedard came out in the “Groucho” mustache, make-up, glasses and cigar, doing the “Groucho walk.” And, Harpo (Brent Hinkley) is happy, crafty, and a little bit naughty. How challenging is it to play the “silent partner” and communicate with body, facial expressions, actions and reactions, and a horn?! Chico (John Tufts) plays the mixed-up foreigner with the groaner puns, and Justin Keyes plays Robert Jamison the dingy bellhop, aka Zeppo. All in all it’s a raucous romp of high hilarity! Everything is choreographed, from their entrances, walks, near misses, and physical humor to the dance numbers, sound effects and horn honks!

The band was on the stage, towards the back. Most of them were hidden from my view, except for Gregg Coffin on piano (also the Music Director). We sometimes found ourselves watching him so much that we missed some of the antics from the actors. Although, there is a lot going on in a performance like this one! Ann Michels (recently seen as Mary Poppins at the Chanhassen) has a fun, new role as the slightly naughty, greedy con-artist Penelope Martin. Her partner in crime is Harvey Yates (Paul de Cordova). Cat Brindisi plays the beautiful and talented Polly Potter. Trent Armand Kendall is a hilarious detective who loses his shirt, and Peggy O’Connell plays an easily confused dowager Mrs. Potter. The trio of Wesley Mouri, Katie Hahn, and Jessica Fredrickson sing us away on this tropical real estate romp. It is as opposite from A Christmas Carol as you can get, which is playing on the Guthrie’s Wurtele thrust stage, now through December 27, 2015. 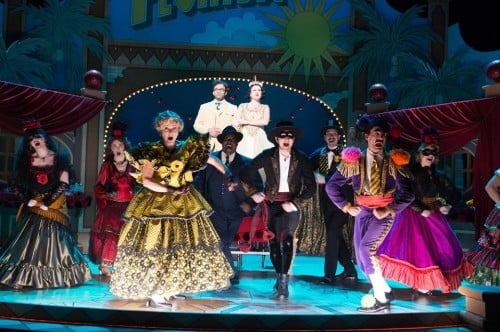 The cast of the Guthrie Theater’s production of The Cocoanuts, directed by David Ivers. Music and lyrics by Irving Berlin, book by George S. Kaufman, adapted by Mark Bedard, with musical adaptation by Gregg Coffin. Set design by Richard L. Hay, costume design by Meg Neville and lighting design by Marcus Doshi. November 14, 2015 – January 3, 2016 on the McGuire Proscenium Stage at the Guthrie Theater, Minneapolis. Photo by Jenny Graham.

For tickets and show times for The Cocoanuts or A Christmas Carol, visit the Guthrie Theater. For a fun night out with friends or family, see either, or both! Happy Holidays!

Journaling Prompt: Are you a Marx brothers fan? Have you ever tried lutefisk?

IWSG August 2013, A Day Late and a Dollar Short 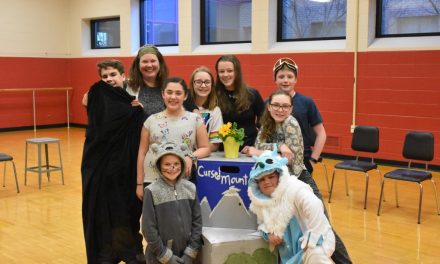 A Birthday in Review