Quote of the Day:  My imagination can picture no fairer happiness than to continue living for art. — Clara Schumann

The artist alone sees spirits. But after he has told of their appearing to him, everybody sees them. — Johann Wolfgang von Goethe 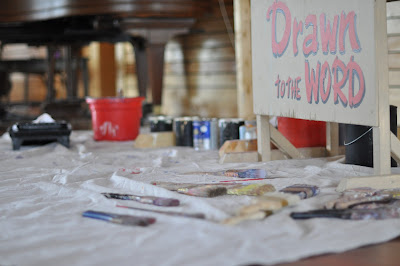 Last Friday, I mentioned that I’d gone to summer camp with my family. It’s a church camp with a fine arts feel. The topics for discussion were on people who were inspired by God to create something that changed how people think. We had an excellent teacher, Nancy Koester, a religion teacher from Augsburg College in Minneapolis, MN, who loves history. We had an artist who used the above tools to bring stories to life through his painting. He is a science teacher turned pastor turned touring artist. (More on him later). We had fine musicians who filled the room with sound and invited everyone in. And, we had a preacher who had us singing the Psalms and showed us how they hold the messages and healing that get us through the hills and valleys of life.
On Monday, Nancy gave us some background on the composer, George Frideric Handel and his famous choral piece The Messiah. He spent much of his early career writing operas. Operas at the time were rowdy events, much like sporting events today. Really. People came and booed and cheered and jeered. So, when Handel wrote The Messiah, people didn’t know what to make of it. Where should it be performed, they wondered? It’s too much like opera to be performed in a church. It’s themes are too spiritual and sacred to be performed in an opera house. He was rejected and criticized and pushed away. At one point in his life he was so poor, he nearly ended up in debtor’s prison. And, now, you can hear parts of The Messiah in many types of churches, colleges, community choirs, and even on Youtube. This is where the Halleluiah Chorus comes from. (Comment below or on facebook if you’ve ever sung any part of this piece.)
On Tuesday, Paul Oman painted a murial while we watched and listened to a recording of The Messiah. 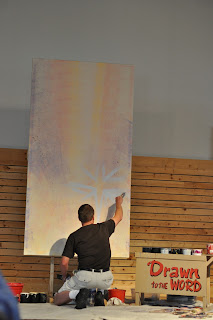 He preps the canvas the day before he paints for an audience. 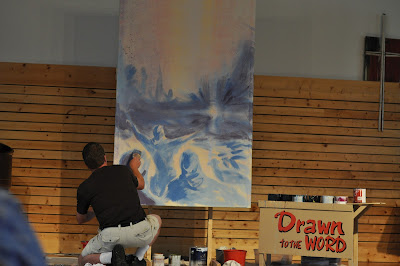 Each brush stroke reveals the image he has of the story. 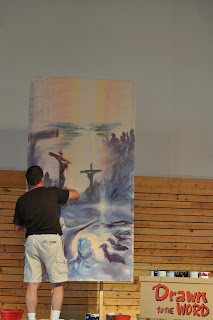 Watching Paul paint is like reading a story.
Each line and color adds more details.
I find myself trying to predict what he will make from certain parts of the painting. The “board” sticking out on the left seemed out of place, at first. 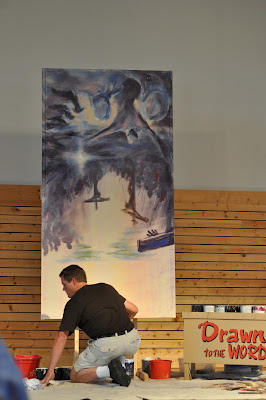 He puts his canvas on a rotating easel.
He paints upside down and sideways, getting the best angle, fascinating us with his perspective, and keeping us guessing as to what will be revealed. 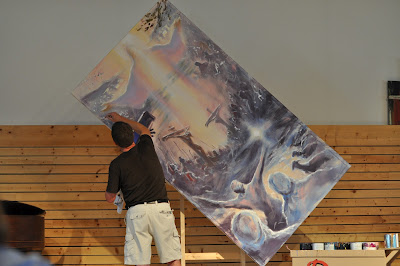 All the while, the mighty chorus is singing some beautiful parts of The Messiah. Paul’s brush strokes, at times, moved to the rhythm of the music. As Paul’s vision became clearer, the music became more powerful, and we all sat in awe. 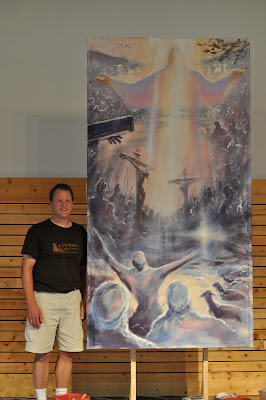 The Holy Spirit was shining down on all of us.
I have plans to write an article about Paul Oman’s murial ministry, Drawn to the Word. He has painted in nearly every kind of church throughout the United States, and has hopes of going international. He said he can bring any story to life through his art, not just Bible stories. Do any of you know of a good publication for his story?
I’ll write more this week on our education and fun at Mount Carmel camp near Alexandria, MN. On Wednesday, we learned about Harriet Beecher Stowe, author of Uncle Tom’s Cabin.
Go. Create. Inspire!
Who knows where your inspiration will lead?
Journaling Prompt:  Have you ever felt so inspired to create something that you knew it came from a Higher Power?