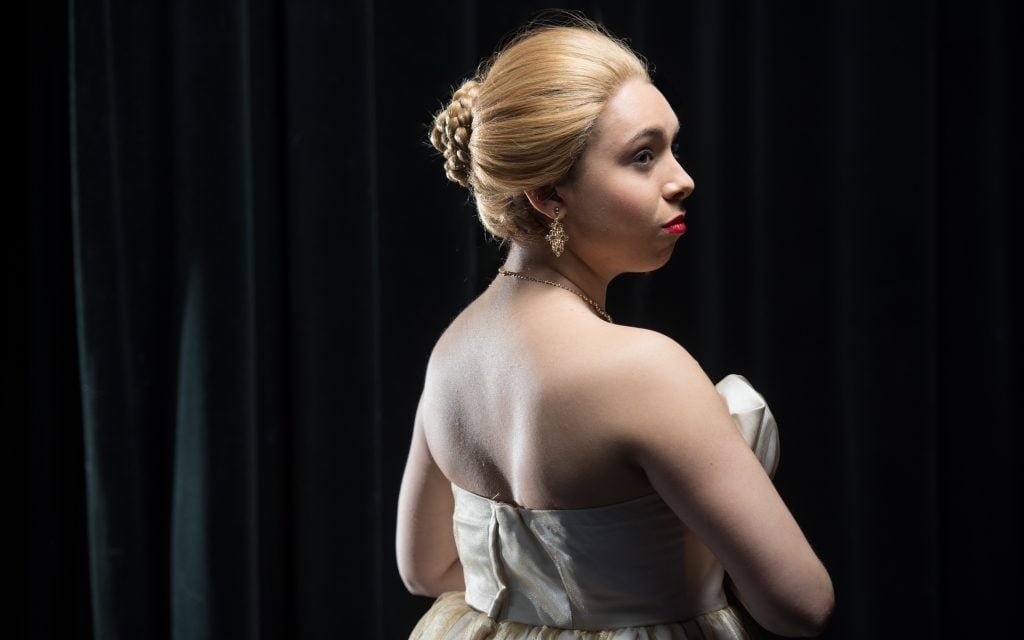 Quote of the Day: Music can minister to minds diseased, pluck from the memory a rooted sorrow, raze out the written troubles of the brain, and with its sweet oblivious antidote, cleanse the full bosom of all perilous stuff that weighs upon the heart. William Shakespeare 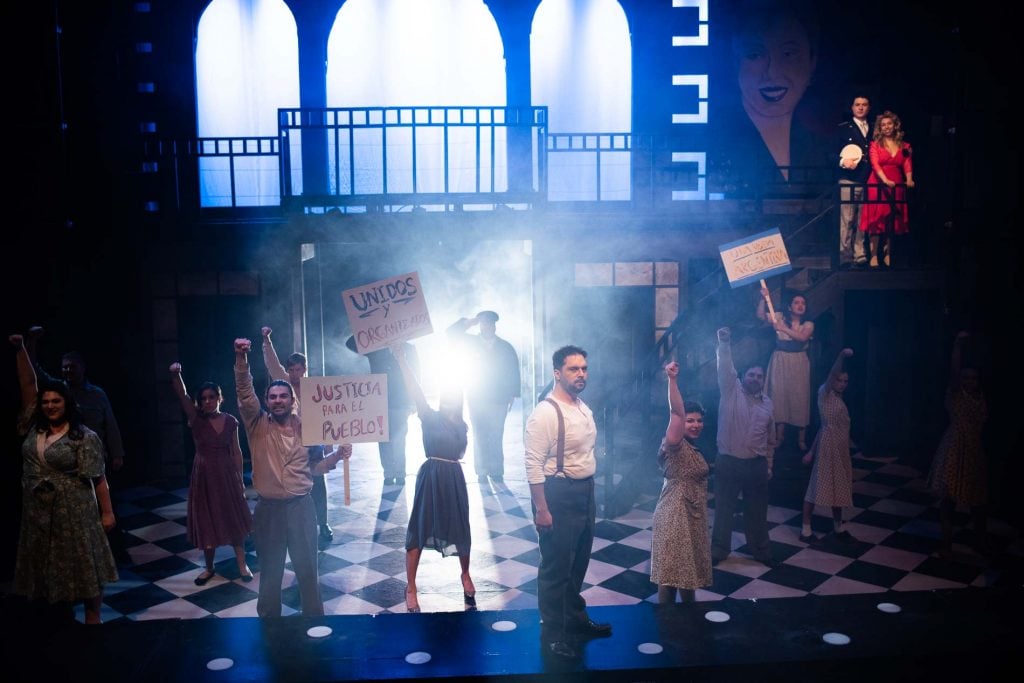 Cast of Evita at Lyric Arts in Anoka, MN, through April 14, 2019. Photos by Twin Cities Headshots.

Andrew Lloyd Webber’s Evita is a show that you need to see/hear performed live to truly experience the emotional impact of the music, the story, and the revered Argentinian Spiritual Leader Eva Perón. Webber and lyricist Tim Rice capture the spirit of Evita and the impact she had on the people of her country. She was born into poverty. Her mother was her father’s mistress, “Kept hidden from his other family.” She used to sit in the movie theaters and fantasize about being like the movie stars. At age 15, she left home and began her career on stage and radio, and quickly became a name people recognized. She caught the eye of Juan Perón, and as a couple they helped each other rise to political power. She was both ambitious and self-serving, beautiful, inspiring, generous and strong. The people put her on a pedestal, making her their icon of hope. Hers was the quintessential rags to riches story.

I applaud Lyric Arts for taking on this project. The staging, the score, and the beautiful diverse cast give this story life and depth. In the talk back after the show, director Matt McNabb said that it was both challenging and rewarding. They cast the show months ago, and they all got to work learning the complex music and lyrics. The show is all music, every line sung. Adan Varela plays Ché, a character who acts as sometimes narrator, sometimes Eva’s conscience, and often representing the people of Argentina. He is in nearly every scene. Adan said that he started studying the score as soon as he was cast, and his hard work pays off. His performance was smooth, heartfelt, and powerful.

Kiko Laureano plays the iconic Eva Perón. Her entire performance embodied the beloved “Santa Evita.” Her look, her gestures, facial expressions, and gorgeous voice were all divine. The entire room went silent as she stood on the “balcony” at the top of the second act and sang “Don’t cry for me Argentina.” The ensemble, the People, lift their arms up to her. She is giving them love and support, someone to hang their hopes and dreams on. She’s flawed, of course, as everyone is. Still, many chose to see her great works, her generosity towards the poor and equal rights for women, her beauty and her power. Others might have criticized her means and her wealth, but she says in her final song, “The choice was mine and no one else’s.” 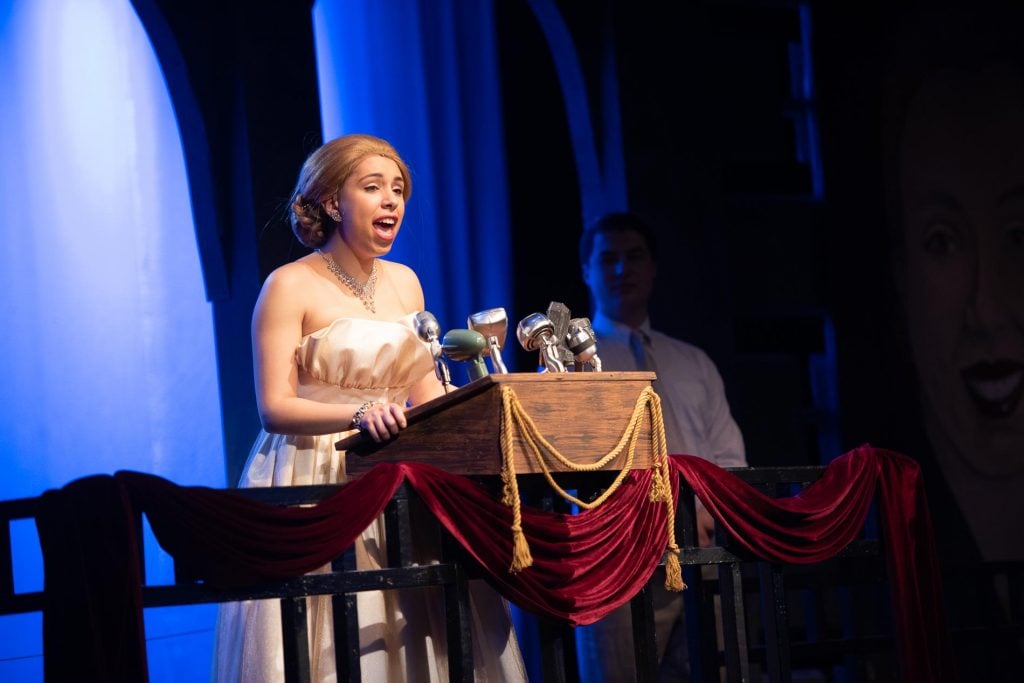 Jake Sung-Guk Sullivan plays the charming and handsome Juan Perón. His performance is strong and emotional. Juan certainly had his own ambitions, and saw something in Eva that would help him achieve them. While he was the leader of Argentina, from 1946-1955, Eva was at his side, probably urging him along, often stealing the spotlight. 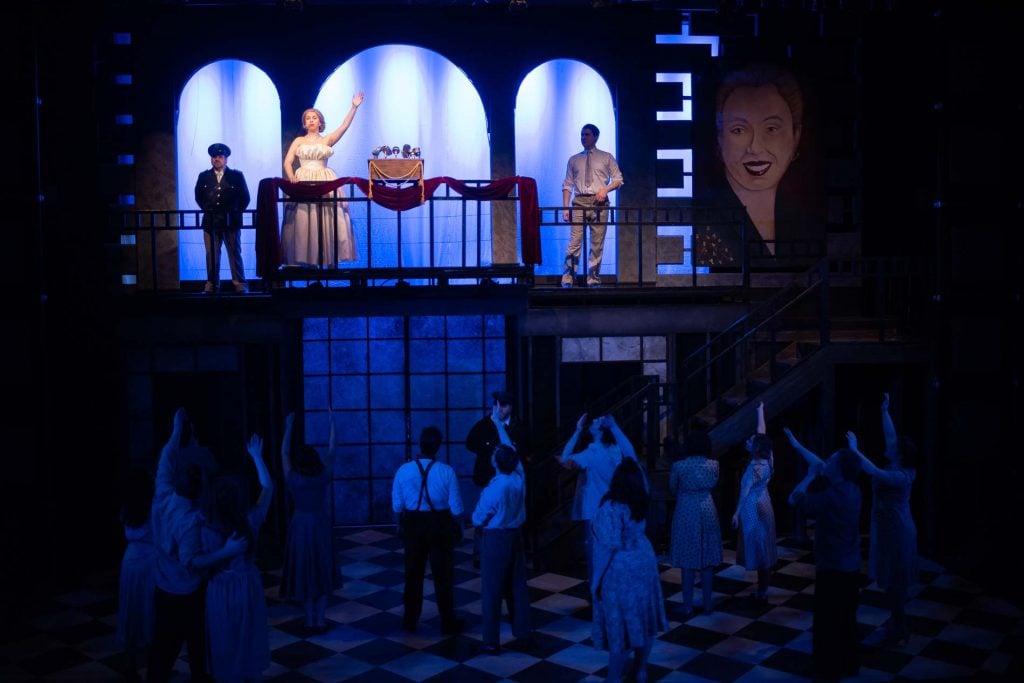 Cast of Evita at Lyric Arts, through April 14, 2019. Photo by Twin Cities Headshots

The entire ensemble works hard to create this masterpiece. Laila Sahir as Perón’s Mistress took our breath away in her solo “Another Suitcase in Another Hall.” Her lovely, light, sweet voice carried the notes to the rafters and into our hearts. The choreography by Lauri Kraft is excellent. I found myself watching the movement and listening to the many voices during the ensemble scenes. I particularly liked the men’s musical chairs during “The Art of the Possible,” and the sweet, young voices of the girls who sang, “Santa Evita.” So many wonderful, memorable moments in this production. If I lived in Anoka, I’d go again, and again.

You can see Evita at Lyric Arts in Anoka, MN through April 14, 2019. I expect all the seats to fill. This is one you need to experience in person. The cast is phenomenal, the staging up close and persona, and the music is fantastic. The entire score is done by a five piece orchestra under the direction of Louis Berg-Arnold, phenomenal musicianship. The Scenic/Lighting Design by Chad Van Kekerix is outstanding, bringing our attention to certain scenes and specific moments, and creating that atmosphere the gave us the feeling of being there in the moment of the story. And, the costumes by Sara Wilcox are gorgeous.

Journaling Prompt: What do you think of our need to put people on a pedestal, celebrity worship, if you will? What good/bad can come of it?