Review of Plowin’ Thru, Church Basement Ladies ala 1975 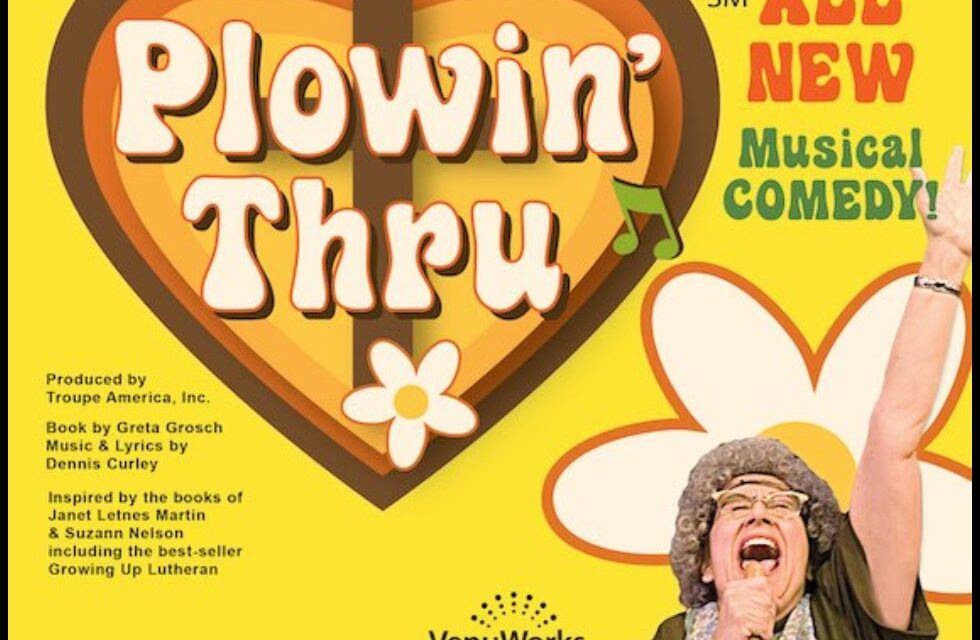 Quote of the Day: I need funny character women. Curt Wollan on his search for actors to fill the roles of Mavis, Vivian, Karin, and Beverly (Signe in the first installment) of The Church Basement Ladies. Also, a funny guy who can take hits from women as Pastor Gunderson. From an interview with co-author of The Church Basement Ladies series, Greta Grosch. One of the things I love most about these shows is the empowerment of women, women in comedy, and hearing them tell their story – through the creative works of Greta Grosch and the Music & Lyrics by Dennis Curley, as well as the fine direction by Curt Wollan. 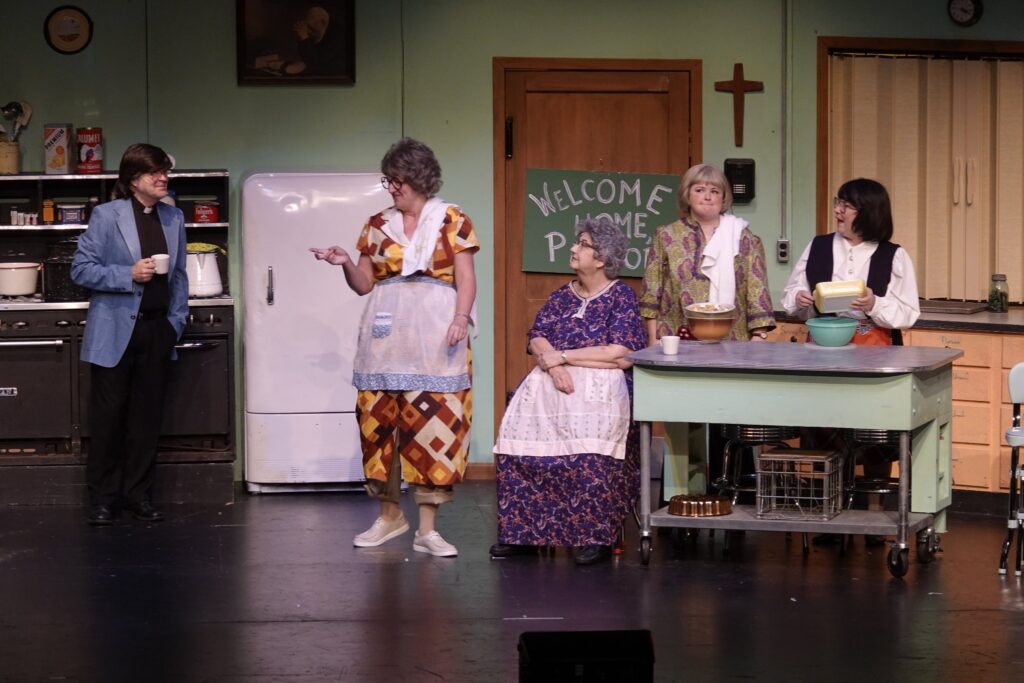 Cast of Plowin’ Thru, 9th installment of The Church Basement Ladies, playing at the Ames Center in Burnsville, MN thru 2/15/23. Photo: Erica Zaffarano.

The ninth installment of this uber-popular series is currently on stage at the Ames Center in Burnsville, MN. I was able to connect with Greta Grosch this week to chat about creating these stories about the funny ladies in the basement. Greta Grosch and Janet Paone (who plays Vivian, the Widow Snustad) had been working together when Curt Wollan hired them to play Mavis and Vivian. They also cast Dorian Chalmers (Karin, Mrs. Elroy Engelson) and Tara Borman as her daughter Beverly. Tim Drake came on board as Pastor Gunderson, and the rest is history. In the current production, the original cast is back, including Gregory Eiden as Pastor. Greta said that they didn’t really know each other, or sing together before the first rehearsal back in 2005, but they connected with melodies, harmonies and a winning chemistry that has continued for 17 years! The original production, The Church Basement Ladies, ran for two and a half years, and is based on the book Growing Up Lutheran by Janet Letnes Martin and the late Suzann Nelson. 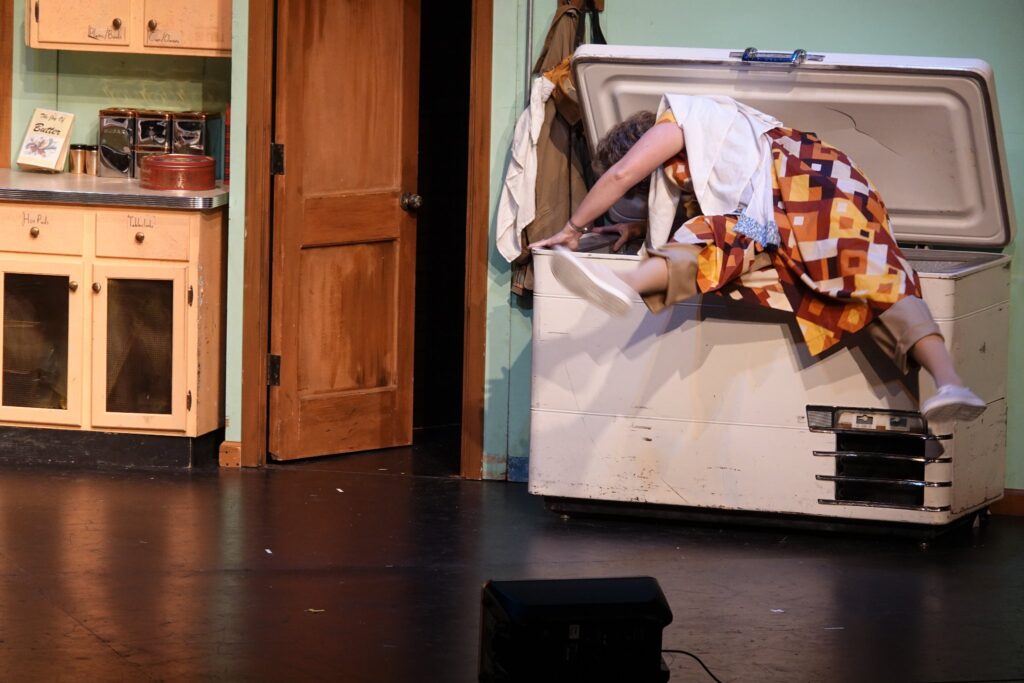 Mavis is in the freezer again! Greta Grosch as Mavis in Plowin’ Thru. Photo: Erica Zaffarano

While performing in the original Church Basement Ladies, Greta started to get ideas for more shows. “I saw five more shows,” she said. She worked with Curt Wollan, first writing for the Medora Musical, then creating more installments of the Church Basement Ladies. Plowin’ Thru is #9, and I’ll have to say I love it as much as the first one. It feels so real. Having grown up in a rural Lutheran Church area, I can say that with confidence. Karin is feeling like she can do more – more than make sandwiches, more than raise kids and grandkids, more than disinfect the kitchen after a lutefisk feed. She’s feeling called to lay ministry, a service called Stephen’s Ministry, a real service offered to people who want to serve their congregation who are not ordained as pastors. In other words, she would do home visits and serve communion (gasp! Vivian isn’t so sure she likes that change!). It’s 1975, and we witness some very real restrictions for women of that time. Karin is denied access to her bank accounts after her husband Elroy dies because her name isn’t on any of the accounts. She can’t have her own credit card, and her son-in-law has to come in to sign papers. They bring this out in the show stopping song that closes Act I, “It’s a Man’s World.” (I’d go back just to hear that song again!)

As the franchise of the Church Basement Ladies has evolved, so have he characters these women portray. Greta said that when she writes each show, she thinks about what we already know about these women, then fills in the gaps. They all have a history, she thinks that through, then works it into the show. They all have relationships that need to be explored. And, of course, they all have their talents and quirks. In this installment, Mavis doesn’t hold back. She calls out Vivian on her stubborn attitudes. They visit community members to try to figure out why people aren’t going to church anymore. The actors play all these extra characters, as well, by changing something, like wearing an apron like overalls, or donning kitchen wear as caps. It’s hilarious and poignant. I want to go on and on about their antics, but don’t want to give too much away. You need to go see it for yourself. 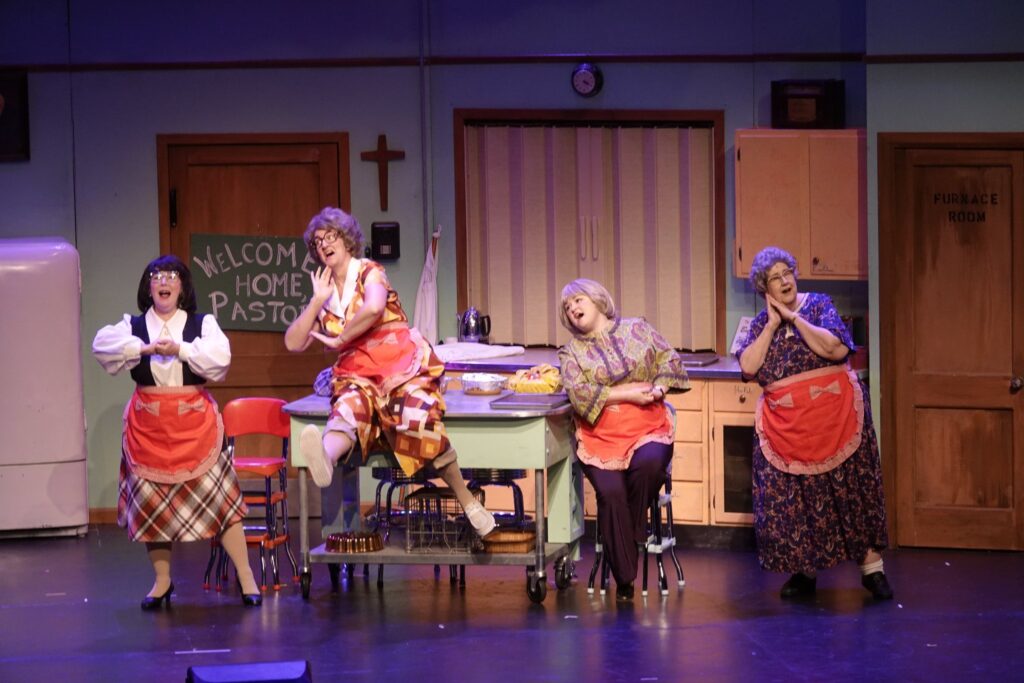 Dorian Chalmers as Karin, Greta Grosch as Mavis, Tara Borman as Beverly and Janet Paone as Vivian in Plowin’ Thru at the Ames Center. Photo: Erica Zaffarano

Many people in the audience (and they come in busloads) are long-time fans of these ladies and their stories. Quite a few have probably seen every show that they’ve produced. However, you could go to this one and understand fully who these characters are and their relationship to each other. I have not seen every episode, with regret. It would be fun if they started from the beginning and did them all consecutively for those of us who missed a few along the way, and for the super fans who will come again and again. 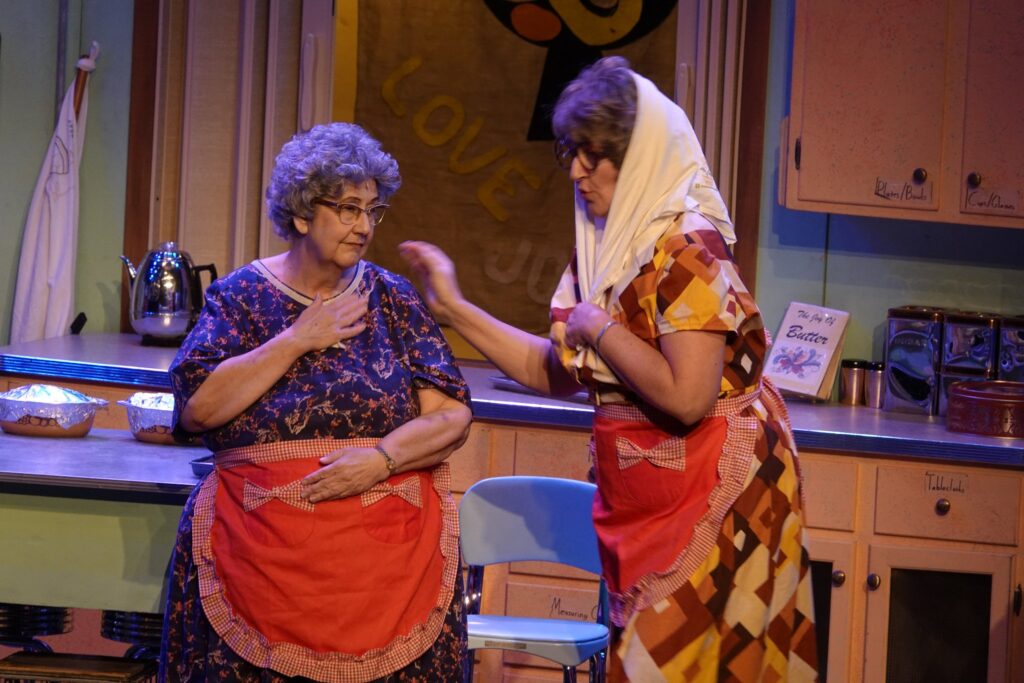 Janet Paone as Vivian and Greta Grosch as Mavis in Plowin’ Thru, on stage at the Ames Center. Photo: Erica Zaffarano

And, now, for the big announcement: The Church Basement Ladies are coming to the big screen. Yep, you heard it here first on Play off the Page (or, at least I did when I chatted with Greta). In fact, Greta was working on the screen play when we connected this week. She’s been talking to people in LA, scouting locations for shooting the film, and getting the original cast on board. I’m so excited!!! The show has toured nationally, and now everyone will get a chance to laugh and cry with these wonderful women all over the world, as many times as you like!!

The Church Basement Ladies have a special place in my heart, not just because they are delightful characters who remind me of where I grew up, but also because I was in a local production of The Church Basement Ladies here in the Brainerd lakes area. It is by far the best time I’ve ever had being in a show. I’m endeared to my cast mates. In fact, Barb, who played our Mavis, accompanied me to Plowin’ Thru, and we both loved it. I did not get to see Greta on stage during this performance, however. Her understudy Melinda Kordich played Mavis, and she did a wonderful job, bringing out the laughs and physical comedy that we know and love from Mavis. Gregory Eiden played Pastor Gunderson and others.

The ninth installment of the Church Basement Ladies, Plowin’ Thru, is playing at the Ames Center in Burnsville, MN through February 15, 2023. If you’d like to know more, please read the press release below. Go to Ames Center for tickets and showtimes.

Journaling Prompt: What are some quirky stories from where you grew up? 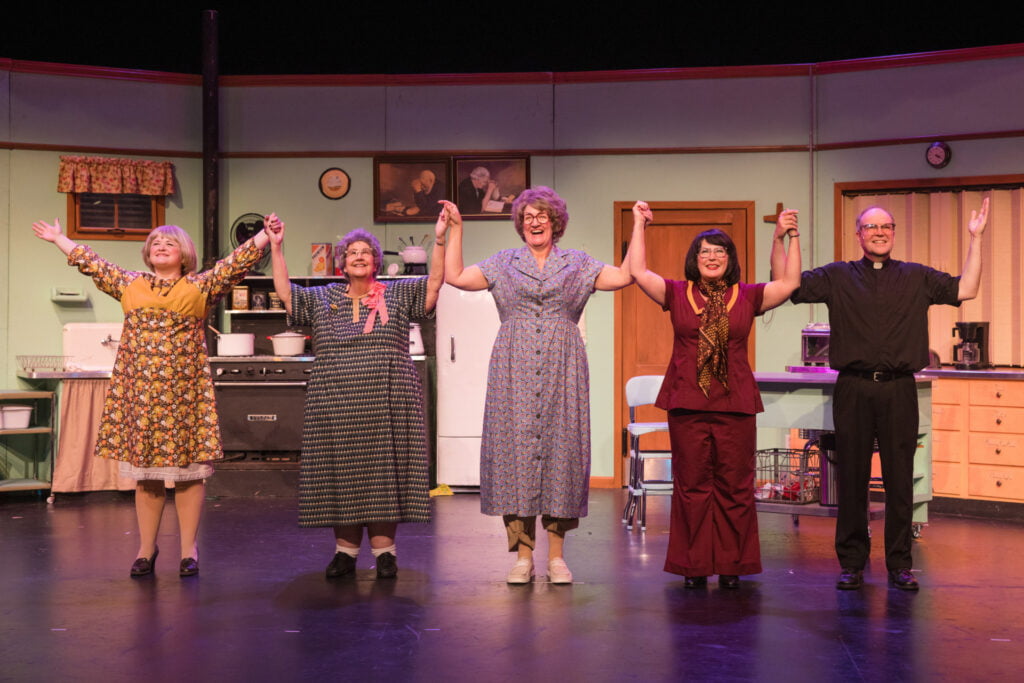 Cast of Plowin’ Thru, 9th installment of The Church Basement Ladies, playing at the Ames Center in Burnsville, MN thru 2/15/23. Photo: Erica Zaffarano.

Plowin’ Thru offers audiences a return to 1975, as the rural Ladies negotiate cultural shifts in America. “We’ve been with these characters for so long,” says scriptwriter Greta Grosch. “We stay interested because they don’t stay the same. Growth is pressed on them by outside forces and, although they may push back at first, they eventually evolve. In this show, while they are glad to have Pastor Gunderson back from the big city, they aren’t ready to embrace his new ideas, or his new toupee! Mavis, Vivian and Karin have moved on and, in Plowin’ Thru, the Pastor is the one struggling with that.”

The show is produced by Curt Wollan, Troupe America, Inc., and features all new music and lyrics by Dennis Curley, part of the team since Church Basement Ladies #2. The script for Plowin’ Thru is by Greta Grosch, who also stars as Mrs. Mavis Gilmerson. Other stars of Plowin’ Thru include original cast members Tim Drake, Janet Paone, Dorian Chalmers, and Tara Borman, who joined the cast when she was only 19 years old. Borman took a few years off from the franchise to travel the world as a cruise ship performer, but is happy to be returning to the show. “I really have grown up in this kitchen,” says Borman, “so it will be great to come home again.”

“Writing this ninth show in the series was a very different process because we lost Suzann Nelson, one of the ‘Lutheran Ladies,’ in 2021,” says Greta Grosch. “Suzann and Janet Letnes Martin originally created the characters of The Church Basement Ladies, and have been the inspiration for every show. I had been in constant contact with them as I began writing this one back in 2020. After Suzann died, I scoured every email and note I’d received from her so I could keep her unique voice alive. I know everyone who appreciated her perspective, her humor, and her love of ‘historical accuracy’ will see it shine through in this show.”

Ticket pricing runs from $34 to $42 for individuals, $28 to $36 for groups of 10 or more. Tickets are available online at ticketmaster.com or at the Ames Center Box Office.

The Church Basement Ladies shows are a franchise series of musical comedies, set from 1959-1979, focusing on the adventures of three women who serve their rural community and support each other from the basement of a rural Minnesota Lutheran Church. The original show was launched in September 2005, and was so successful that it continued on a two-and-a-half year run. Over the last seventeen years, more than three million theatergoers, locally and in touring and regional shows across the United States and Canada, have enjoyed Church Basement Ladies productions — that’s almost 50 million in gross ticket sales. Church Basement Ladies is a production of Troupe America Inc. 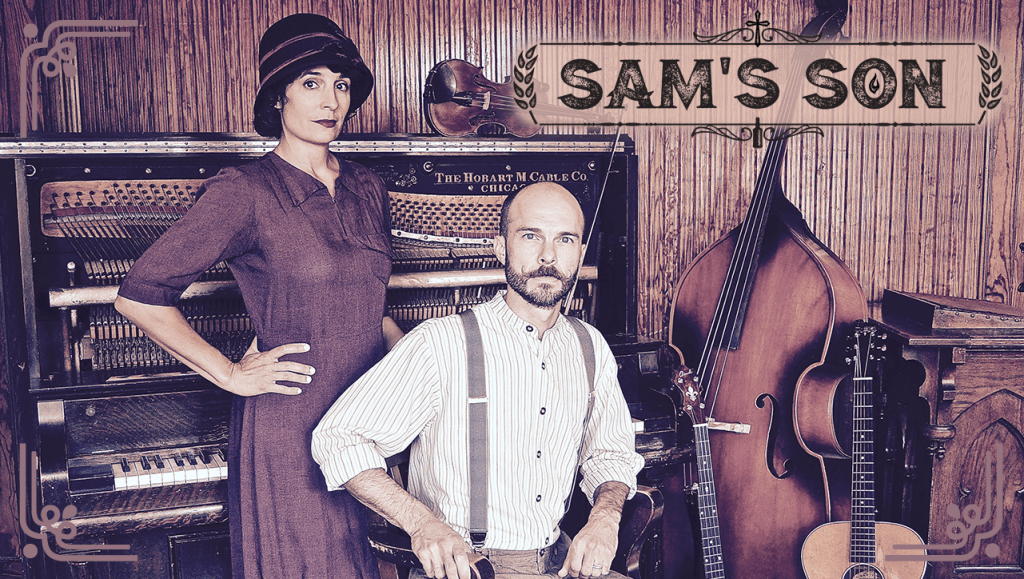 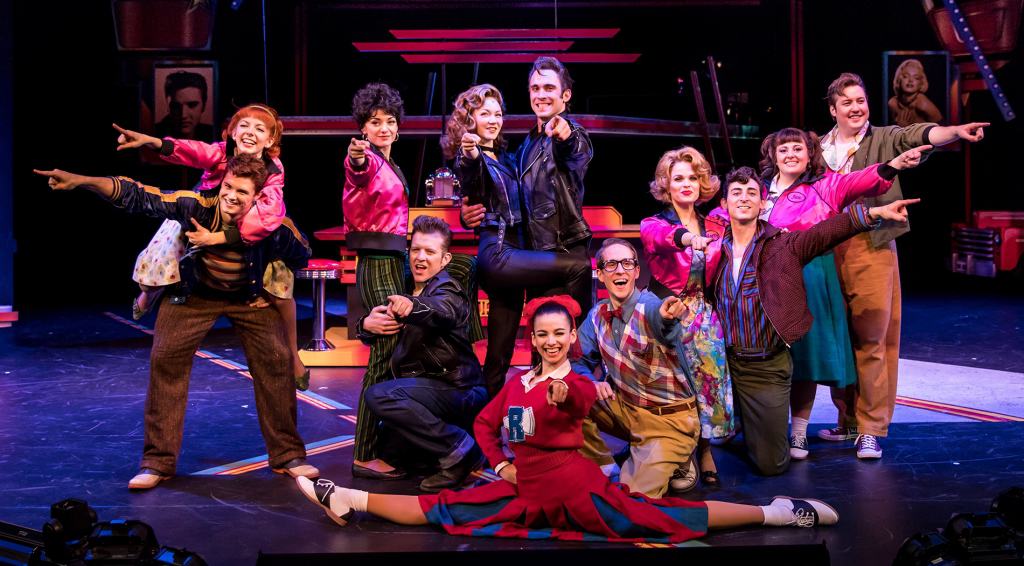