Quote of the Day: Write so fast that your fears can’t catch up with you. Mary Casanova, author and keynote speaker at the Young Authors Conference in Thief River Falls, MN, 2015.

For the past five years, I’ve been invited to be an instructor at the Young Authors Conference in Thief River Falls, Mn (YAC in TRF). I teach one of the breakout sessions for the kids who come from surrounding schools, grades 5-8. Some are eager and excited. Others are quiet and hesitant. A few are outspoken, and others are distracted. Much like an ordinary classroom. The difference at the conference is that they are thrown together in various breakout sessions, some they chose, some that were chosen for them, sometimes knowing a few other kids from their school, sometimes the sole representative of that school. It’s a first day of class, three times in a row. You have to break the ice, ask for student involvement, quickly create a supportive environment, and allow learning and creativity to begin. It ain’t easy. 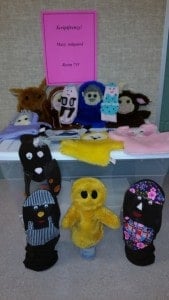 This year I brought along the puppets for support. I also had students read a short script that is the opening to the theatre classes I’ll be teaching, starting next week. I always had plenty of volunteer readers, and they did a great job! It is so fun to hear them read the parts out loud, and give Millie, Willie and the gang voices and personalities. I invited them to create their own characters and continue the story, or write their own. I had a nice variety. Some kids volunteered to read their writing. In one class, I had kids get up to act it out. One boy in particular was outstanding. I asked him if he participated in Speech. He said, “Yes.” I asked if it was in Creative Expression. He said, “No, I do Prose.” I told him to develop what he’d started in my class and to go for it.

I gave them quite a bit of time to write, about 10-15 minutes in a 55 minute class. I felt I could have gotten more student involvement if the script I’d brought was a little longer and had some group lines that they all could say. Next year, I’ll expand it, add the group lines, and provide character prompts when they do their own writing. I hope they had fun and felt encouraged to write, create, and share their work. 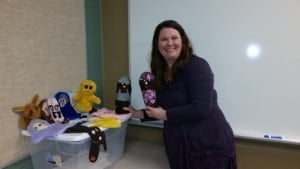 I also enjoy meeting the other presenters at the conference. A few of us get there early enough on Thursday night to have dinner together. We always have lively conversation. Mary Casanova, the keynote speaker, even used a part of our conversation, about your most embarrassing moment as a presenter, when she addressed the middle school writers the next day! Mary Casanova was the instructor at the first class I ever took as a writer. Her first book, Moose Tracks, had just come out. Now, she has dozens of books, from picture books like One-Dog Canoe and One-Dog Sleigh to a book she did for the American Doll series, Cecile, Gates of Gold and The Klipfish Code, an historical novel set in Nazi occupied Norway. (I wanted to buy that one, but it sold out quickly.) Also, a popular title was Frozen, which is nothing like the Disney movie, about a girl who is searching for her identity after being discovered next to the body of her frozen mother in Northern Minnesota at the turn of the century. 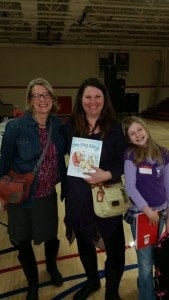 Mary Casanova, Mary Aalgaard, and a Young Author from our conference in Northern Minnesota

At the end of the conference, the kids have a chance to buy books and get author’s autographs. They even ask for mine, and I don’t have any books to sell! I’m a playwright and an article writer and blogger. One young girl, in particular, made a point of getting many autographs and stood near the door to the gym looking for an author named Susan. When she finally tracked her down, Susan signed and gave her one of her books. The girl, as you can see in the picture, was beaming! Later, her teacher pulled us aside and explained that at the last minute a spot opened up for her to come to the conference. She didn’t have any spending money along, so the gift from Susan was even more special. From the way she jumped right in, sought out autographs and interaction with the authors, and bounced right into this picture, I think she’ll have many stories to write and share with the world.

And, that, my friends, is was attending and teaching at these conferences is all about – the inspiration we both give and receive from the students, the sharing of our work and the opening up of doors for creativity. Thank you, Bev, for running such a great program and for inviting me. I hope YAC in TRF continues for many years.

Journaling Prompt: Do you teach or attend conference? Do you do school visits or work with kids? What stories do you have to share about those interactions?

N is for Nancy and Norwegian Heritage