Quote of the Day: Words on the Apocalypse: (This interview and forthcoming play, Mr. Burns, A Post-Apocalyptic Comedy (March 31- May 10) at The Guthrie Theater got me thinking, and spending the morning reading quotes, on the Apocalypse.)

“I sat in the dark and thought: There’s no big apocalypse. Just an endless procession of little ones.” ― Neil Gaiman, Signal to Noise

“What if nobody showed up at Armageddon?” ― C.R. Strahan

“CHEERS, CARTER. At least you have the sense to hand me the microphone for important things.
Honestly, he drones on and on about his plans for the Apocalypse, but he makes no plans at all for the school dance. My brother’s priorities are severely skewed.
Sadie Kane” ― Rick Riordan

“I think this is irresponsible preaching and very dangerous, and especially when it is slanted toward children, I think it’s totally irresponsible, because I see nothing biblical that points up to our being in the last days, and I just think it’s an outrageous thing to do, and a lot of people are making a living—they’ve been making a living for 2,000 years—preaching that we’re in the last days.” ― Charles M. Schulz, Charles M. Schulz: Conversations

“If it happens that the human race doesn’t make it, then the fact that we were here once will not be altered, that once upon a time we peopled this astonishing blue planet, and wondered intelligently at everything about it and the other things who lived here with us on it, and that we celebrated the beauty of it in music and art, architecture, literature, and dance, and that there were times when we approached something godlike in our abilities and aspirations. We emerged out of depthless mystery, and back into mystery we returned, and in the end the mystery is all there is.”
― James Howard Kunstler, The Long Emergency: Surviving the End of Oil, Climate Change, and Other Converging Catastrophes of the Twenty-First Century

I’m in the camp with the creator of Snoopy. Every generation has thought, “This is it. This is the end. Wars and rumors of war, chaos, immorality, doom and gloom.” They hoard supplies and wait for the grand explosion. And, we’re still here. Anne Washburn pondered these things. Here’s her interview with The Guthrie Theater. 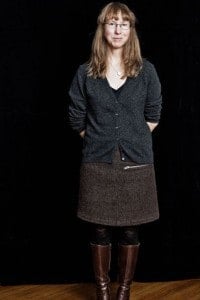 Q: What was the inspiration for Mr. Burns, a post-electric play?

A: It was just musing, in the subway, about what would happen to pop culture after a sudden fall of civilization, wondering what would survive, and how it might be useful. I wondered what would happen if you took a TV show and pushed it forward in time, and then forward again, what different needs it would serve, and how serving those different needs would change it. I thought maybe “Friends” or “Seinfeld” or “Cheers,” anything which had been beloved or popular, and I ended up hitting on “The Simpsons,” a bit at random. Steve Cosson of the Civilians (an investigative theater group of which I am a member) approached me to see if I had a play they could commission and the first step in writing it was to gather a group of actors and ask them to remember “Simpsons” episodes. The one they best remembered was “Cape Feare” and I made a transcript from that session and used it to begin the play.

Q: What about “The Simpsons” do you think captures people’s imaginations enough that it would survive a nuclear meltdown?

A: I think people would remember really enjoying it. And it’s a show in which the humor is so verbally precise that lots of people enjoy the act of remembering it even now, and so I think chunks of it would be in readiness. More than that it’s a show about family, and about community, and I think that focus would seem resonant in a time of deep crisis.

Q: Do audiences need to know “The Simpsons” to enjoy Mr. Burns?

A: They don’t! The play isn’t so much about “The Simpsons” as it is about people for whom “The Simpsons” – for various reasons, including survival – is important. I think people do need to know that there’s a Bart, who is a scamp, and a Homer, who is an idiot, and Marge the long-suffering mother and Lisa the know-it-all sister. Apart from that, if you pay attention in the first act and get the major plot points of the “Cape Feare” episode – as they describe it – you should be good to go.

Q: How has the play evolved through writing, workshop and production?

A: A great deal, the third act in particular since it functions in many ways like a musical drama and that’s an entirely different kind of dramaturgy. We began rehearsals in D.C. for the Woolly Mammoth production with a draft which I would have been dismayed to lay before a paying public, and I did a ton of work on it during that process. I tinkered with it more during rehearsals in New York, and finessed it a bit in London, and tweaked it some in Chicago, and I’ll be looking in at it a bit during rehearsals for this production, and I’m sure I won’t be able to resist poking at it the tiniest amount, and then after this I’m walking away.

Q: Can you describe the role that music plays in Mr. Burns? Had you written lyrics for other plays?

I was thinking of Greek dramas. Not to compare the production in the third act to a Greek drama – Greek dramas are the product of a very sophisticated and educated society, and the world of the third act is only barely stable – but the Greeks were able to tell very serious, dramatic, exciting stories, with very nuanced psychological exploration, with big singing, and big dancing, and I wanted to capture a hint of that.

Q: Would you consider Mr. Burns ultimately to be a positive play about potential apocalypse?

A: Well … no, not really. It’s positive in the sense that people survive and continue. I think it would have been better to have avoided the apocalypse in the first place; I do think people are amazing, but they aren’t sensible. I think it might be a positive play about human resilience.

Q: What kind of experience do you hope Guthrie audiences will get from Mr. Burns?

A: Oh, I hope they’ll have a little fun. See something a little unfamiliar.

Journaling Prompt:  What are your thoughts on the Apocalypse? Are you a Simpson’s fan? How many years has it been on, anyway?

One more quote for you, Anne! (I couldn’t pass this one up.)

“On the day the world is blown up, the playwright whose show opened the night before will be leafing past the news section of the Times to find his review–as he ascends through the stratosphere, oblivious.”
― Arthur Miller, Salesman in Beijing 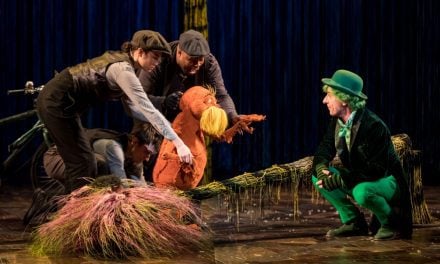