Quote of the Day:  You’re beautiful…no matter what! The first part of the line comes from Shrek in the play, the second part came from a girl in the audience. It melted my heart.

What time is it? The girls asked their mom when they got to my house. Two of my piano students, sisters Parker and Peyton, and their mom accompanied me to The Children’s Theatre in Minneapolis, MN for Shrek the Musical! We were all excited. On the way down, Parker and I talked about the plays we’re writing. Peyton interjected with ideas, and their mom was encouraging. 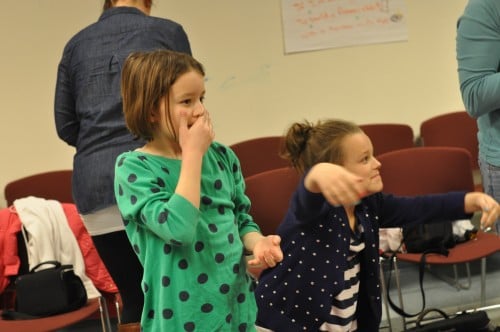 We started our Big Theatre Day with a workshop at CTC, led by Chris, using one of William Steig’s other stories, The Jabajaba Jungle, which is really fun to say. Go ahead, try it! 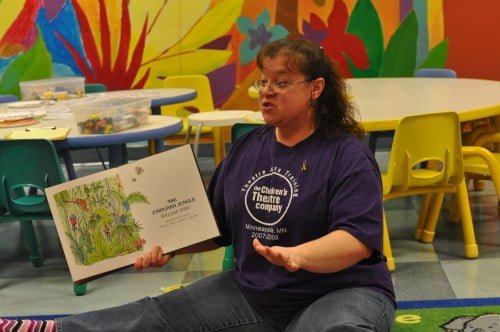 She’s fantastic. First, she read the story, then had the kids act out their own story based on the book. She had a nice range of kids, too, from crawlers and preschoolers to 2nd and 3rd graders! They had a blast. The room was bursting with laughter and imagination! Then, we were invited to watch a bit of the rehearsal. Although, Shrek started preview audiences already, they had a bit of tweaking to do for the official opening night/press night. The kids, and grown-ups, had a few questions for Michael. He told us that when he thinks about choreography for Shrek, he has to consider the costumes and how the actors can, and cannot, move in them. Sometimes, they need big movement, or slower movement, or a wider area! Take a look at Humpty Dumpty. I really liked this costume! 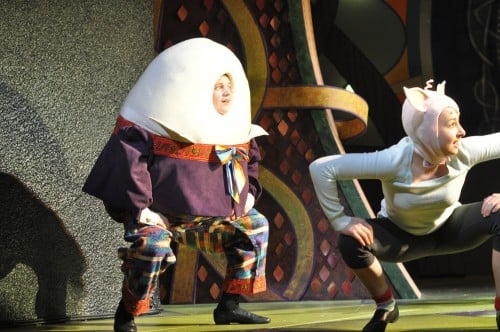 Someone asked him how he became a choreographer. He gave us a quick run through his career as a performer, then said, “I’m flexible and I’m bossy, so what else would I be?” Pretty funny. He seems to really enjoy working in theatre with a wide variety of characters! Have you ever thought about how much work goes on behind the scenes? Many, many, many hours: set, costumes, props, choreography, publicity, programs, scheduling, contacts, ticket sales, make-up, hair, and many more things that I probably don’t even know. The first thing we saw when we walked into rehearsal was the set getting a little work done.

We were only allowed to watch for a short time, then headed into the Minneapolis Institute of Arts (MIA) for lunch and a look at the art. Although the MIA is large and very interesting, it wasn’t long before the girls started asking, “What time is it?” We had to wait until 7:00 for the show to start. Our own Shrek inspired photo

Luckily, Mr. Happy jumped into my Play off the Page bag, and the girls had fun posing him at various sites around the MIA! Also, we were blessed with a gorgeous day, and spent an hour or so lounging in the park across the street from the MIA where we enjoyed ice cream, reading, creating, and playing with puppets! 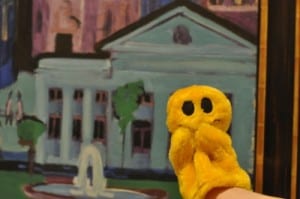 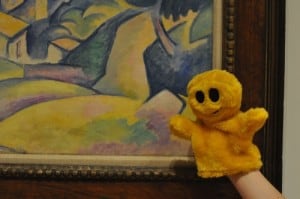 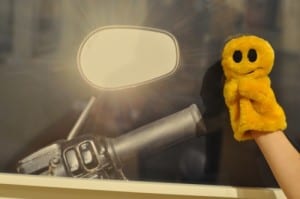 Mr. Happy’s favorite artwork at MIA, a photograph of a motorcycle! 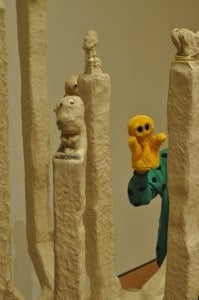 Mr. Happy and the girls get inside a Matisse inspired photo shoot. When the girls started asking, “What time is it?” we packed up and walked up to The Bad Waitress Diner for dinner. Soon, we were all wondering “What time is it?” Time to walk back to the theatre for the big event.

It was worth the wait! They were all there: Shrek, Fiona, Donkey, Gingy, Dragon. The dragon costume was the most impressive. Three actors represented the dragon, two on each side who moved along with the main actress who was pushed around on a cart, making her very tall, and her red and gold glimmering costume long and flowing. Lauren Davis plays the dragon. Her voice and costume were so stunning that I couldn’t look away. Something funny happened with Lord Farquaad towards the end of the show, but I missed it because I was mesmerized by the Dragon. 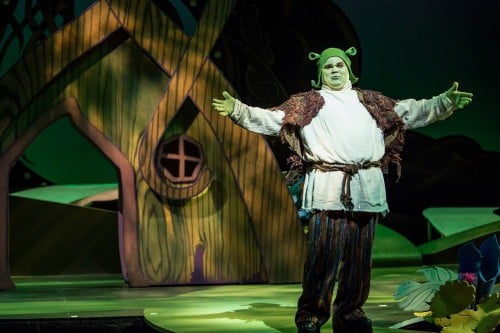 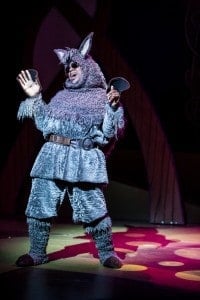 Ansa Akyea as Donkey. We saw him last at CTC as Jackie Robinson, quite a different role! And, he was fantastic in both. 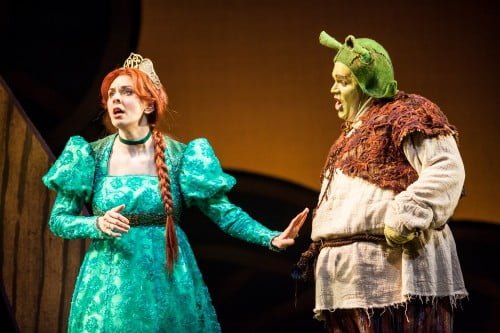 Autumn Ness and Reed Sigmund, a match made in theatre!

The whole show is spectacular. It is a stage adaptation of the movie by DreamWorks with original songs. We loved watching it come alive on stage.

So, what time is it? It’s time for you to get your tickets for Shrek the Musical at The Children’s Theatre Company in Minneapolis. And, hurry! They’re selling fast. This is a show that everyone will love watching, now through June 15, 2014.