Charley’s Aunt at the Guthrie, review

Quote of the Day:  ‘Charley’s Aunt’…brought Brandon Thomas fame and fortune, and I have been told that when the evergreen farce was first produced on tour, the author and Penley had been so frightened by a friend, who declared that a man playing a woman’s part would never be accepted by any audience, that the author played one of the characters himself in order to save a salary in case of a dire failure. Jessie Millward, from her memoir Myself and Others, 1923. Printed in the program about the show from The Guthrie Theater in Minneapolis. “After the play opened in December 1892, it ran for a record-breaking 1,466 performances.”

(And, men dressed in drag, portraying women, have had numerous successful shows ever since. Two of my favorites: Tootsie and Mrs. Doubtfire.)

Nothing cracks us up like a man in a dress. 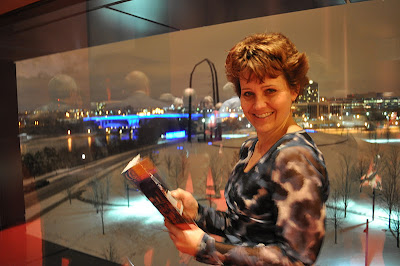 My guest for blogger night for Charley’s Aunt, friend Denise,
a theater fan and one of the readers for the table reading of my play
Coffee Shop Confession.
Charley’s Aunt by Brandon Thomas, directed by John Miller-Stephany, is a good, old-fashioned British farce. It’s full of color, quirky characters, mistaken identities, ridiculous situations, and plenty of sight gags and physical humor. While the need for chaperones and guardians when courting young ladies is long gone from our American society, the desperation of young men trying to woe women never will be out of style.
This is a period piece. The set is elaborate and stylish, like we’re looking into a classic doll’s house.  The costumes were colorful and detailed, reminding me of Mary Poppins.  The colors on the girls’ dresses were like cotton candy. Again, images of gazing into the doll’s house.
Then, the scene changes and after we come back from intermission, a new set has dropped down and we see the back of the building. The actors are running in and out of the gardens. Some are trying to steal a moment together, while others are running to avoid too close of contact. This show is a feast for the eyes.
As the plot rises to hilarity and major confusion in act three, the outdoor set rises, the inside of the Drawing room glides forward, and the pressure is on to make things right. The forward and rear views of the set and the actors, the ins and outs of the plot, the total physical show, brought memories of Noises Off. The way the young men plot to get the girl, dupe the old lady, and ward off the guardian were similar to watching The Importance of Being Ernest several years ago at the original Guthrie Theater.
Besides the rascally antics of John Skelly as Lord Fancourt Babberly, also disguised as Donna Lucia d’Alvadorez, I loved watching the college attendant Brassett, played by Charles Hubbell. He truly embraced his role. His looks to the audience, action behind the boys’ backs, and the quips of his asides, were delightful. His eyebrows and facial expressions said it all.
One thing that did feel out-dated in this script was the portrayal of the young ladies. They were gorgeous to look at, but had few lines, and none of the jokes. They were eye-candy, pretty paper dolls. Denise and I had ideas for rewriting the ending, wanting the young woman to have plans of her own once she broke free from her guardian.
Come back later this week to see what’s behind this door! 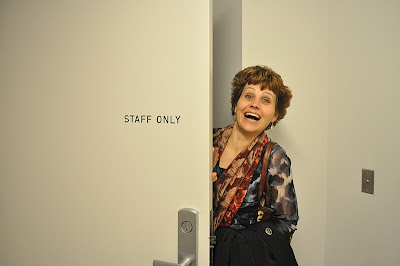 Go. Create. Inspire!
Journaling Prompt:  Have you ever watched a show where you wanted to rewrite the ending? How do you feel about the portrayal of women in plays?

Invite to Lizzie Bright and the Buckminster Boy