Review of Memphis at Artistry in Bloomington 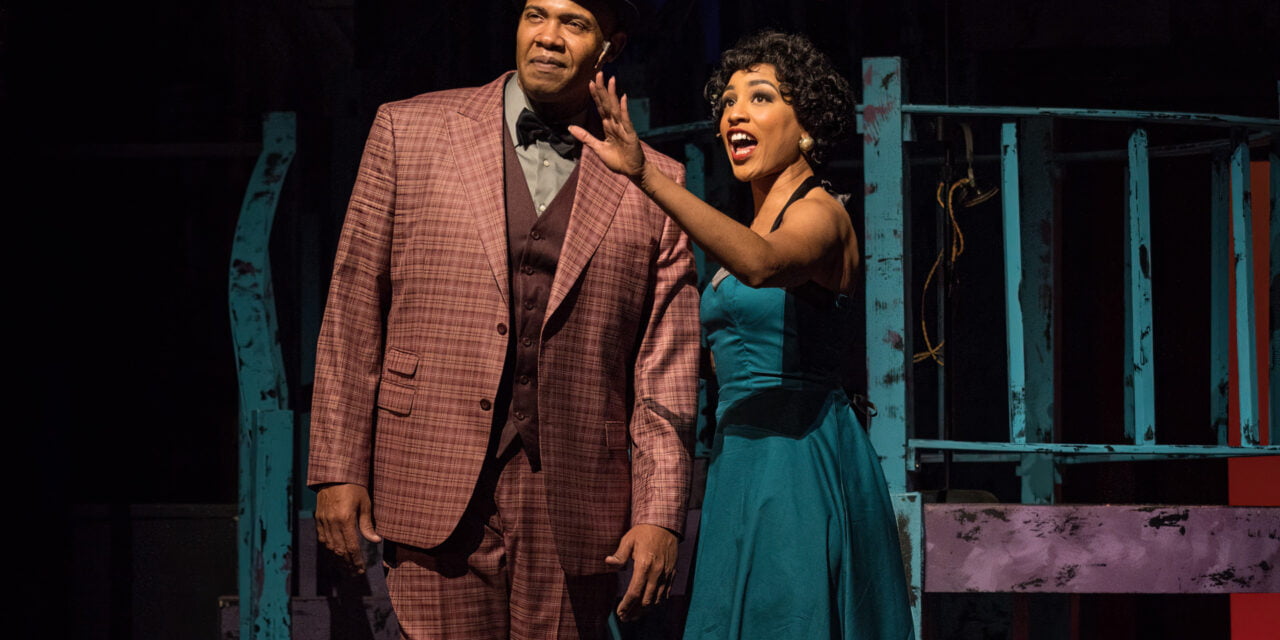 Quote of the Day: Oftentimes who tells the story, and how they tell it is more influential than the story itself. Aimee K. Bryant, Director for Memphis, a musical about music, the blues, rock ‘n’ roll, race, and love. 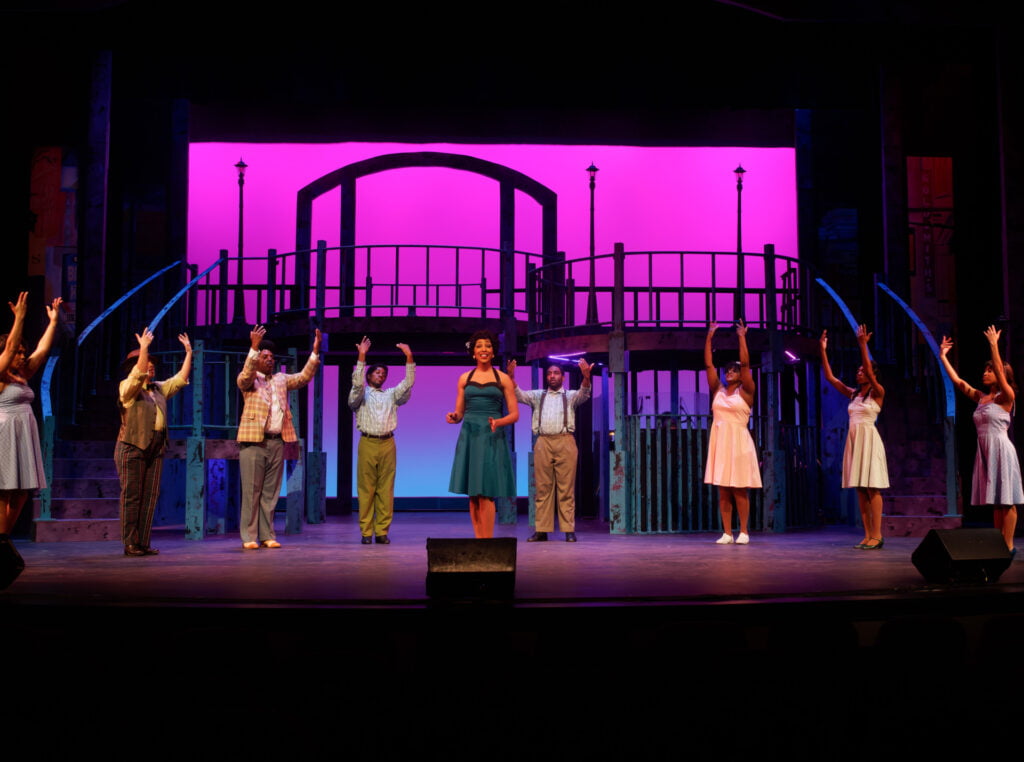 Vie Boheme as Felicia Farrell and company in Memphis at Artistry in Bloomington. Photo: Tommy Sar

This Tony award winning musical Memphis is set in its title town in the 1950’s. DJ Huey Calhoun (Matt Riehle) falls in love with the blues that he hears in the underground clubs, and one of the singers, Felicia Farrell (Vie Boheme). Never being one to adhere to rules, Huey locks the door to the radio booth and spins the records he knows will set the music world on fire. While the good ol’ boy white supremacists try to shut him down, the young people clamor for more of that soul searing, move your feet, music. He sells records and products, like beer from the local store, with his own flair, so he’s given a little more leeway on what he plays, and segregation on the airwaves starts to diminish. 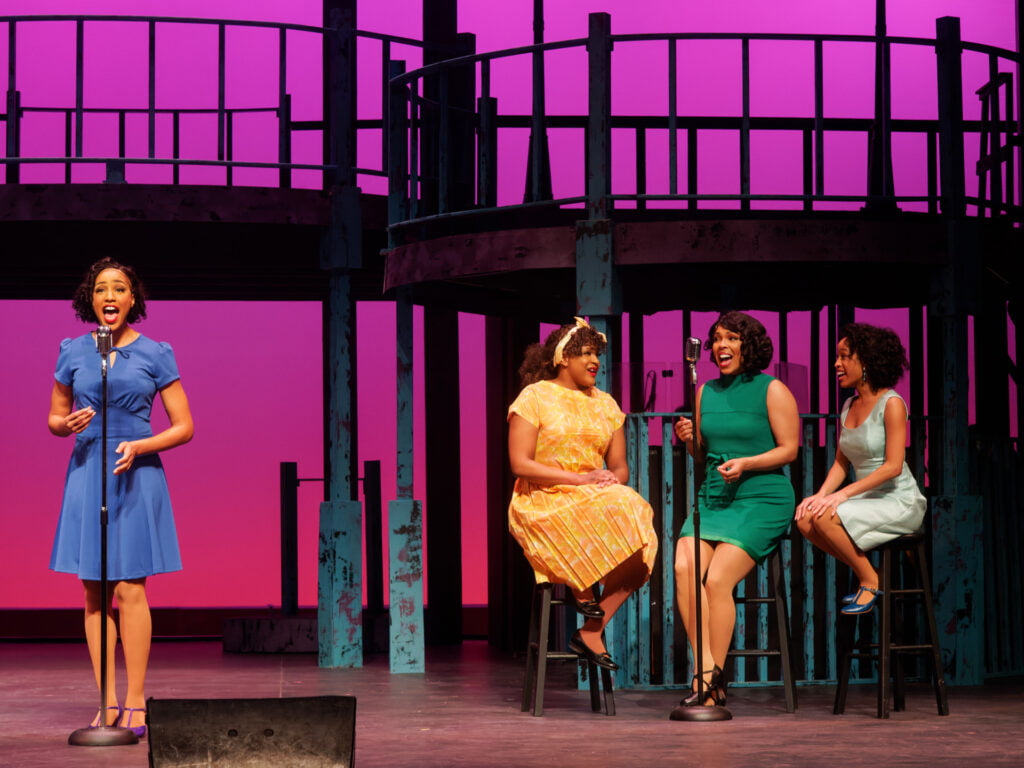 The show opens with the song Underground, in an all Black club. The music and dancing get your heartrate up, and the vocals are out of this world. When Huey wanders in, everything stops. Tensions rise as Delray (Danté Banks Murray) confronts Huey, asking him what he’s doing there. He says it’s for the music. Then he sees Felicia and hears her sing, and he’s determined to help her get her music out into the world. Some people aren’t ready for it, but Huey is fearless as he pushes race boundaries. He also wants to pursue a relationship with her, but that is also dangerous.

At the end of Act I, Huey and Felicia are attacked by racists, and they stumble into the club, beaten and afraid. The cast, lead by Gator (Emily Madigan), sing Say a Prayer in an incredibly emotional performance. (I needed a minute before getting up and walking into the hallway for intermission.) In Act II, we see the rise of Felicia’s career, the tension of their forbidden love, and the pushback from community. Huey’s mother (Wendy Short-Hays), who was resistant to their relationship, encourages them to go to New York where Felicia can advance her career, but Huey can’t imagine leaving his home and Memphis. He brings all those feelings to light in the song Memphis Lives in Me, backed up by the incredibly talented cast. 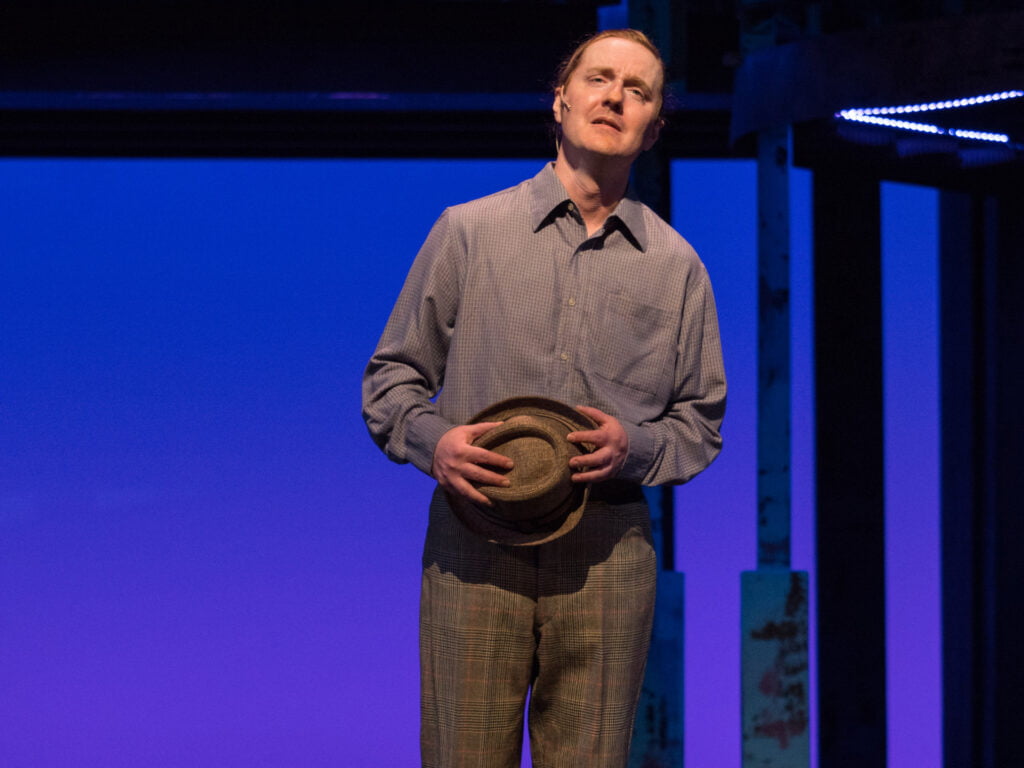 I was so moved by this performance. The story touches on so much of the human experience – the need for love and acceptance, following your dream and using your talents, living in a community that you both love and deplore because of how people treat each other, and the overwhelming power of music to bring people together and create change. One of the songs, Change Don’t Come Easy, says it all. People’s attitudes and prejudices are deeply set, but they can change. What people accept and resist also can change. We can be better. That’s the hopeful message I got from this story. 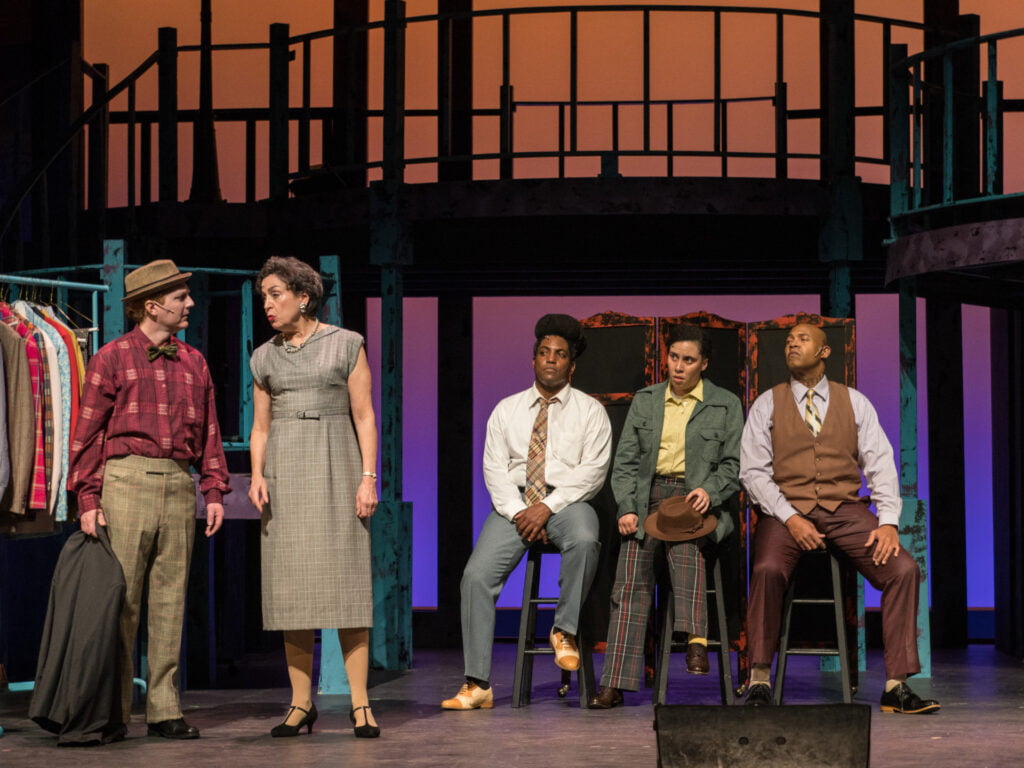 I could go on and on about this outstanding production. The multi-talented Vie Boheme seems born to play this role of a beautiful singer/dancer/performer who captures the audience the minute she walks on stage. I’ve already raved about Matt Riehle as Huey. He gives the role so much heart. Twin Cities theater favorite, Jay Albright plays multiple roles in many poignant scenes. Rudolph Searles III plays Huey’s friend Bobby Dupree with energy and humor. The entire ensemble sing, harmonize, and dance to perfection. Choreography by Leah Nelson. Music direction by Ginger Commodore. The wonderful nine piece band is onstage, slightly hidden under the bridge part of the set. Set design by Michael Hoover. Gorgeous period costumes by Joe Samuel Burch III. Aimee K. Bryant has assembled an incredibly talented cast to tell this compelling story, bringing out so many emotions and lifting up the musicians who gave us the heart of rock ‘n’ roll.

You can experience this stunning production of Memphis at Artistry at the Bloomington Center for the Arts through May 15, 2022. The house was nearly full on Sunday, and I wouldn’t be surprised if they sold out some performances. Put this one on your must-see list this Spring!

Journlaing Prompt: What do you love and despise about your hometown?

Open to Other Opinions 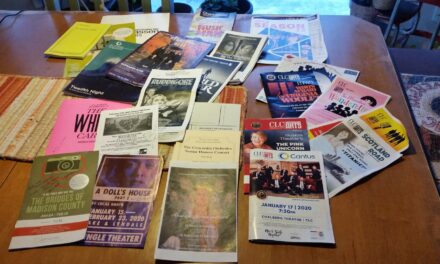