Review of The Pirates of Penzance by GSVLOC 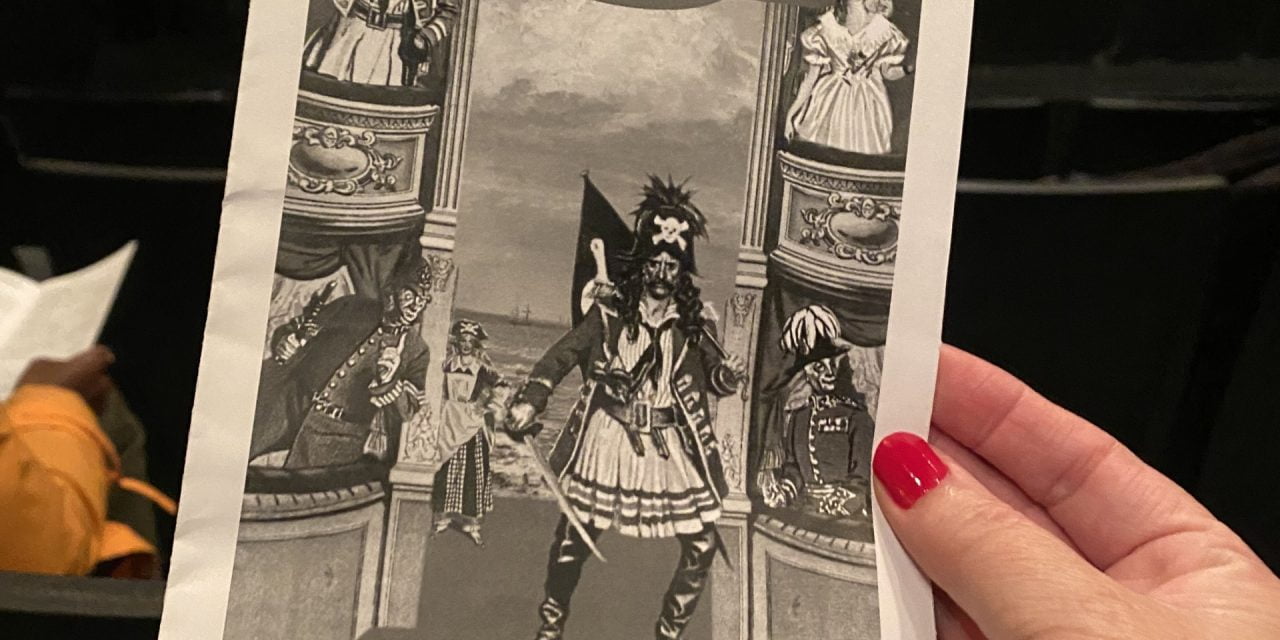 Quote of the Day: Our production pays homage to that auspicious occasion by restoring the original second act finale, which includes a nod to “Pinafore,” a hymn to the nobility, and a reprise of Major-General’s patter song. Gary Briggle, Director for the Gilbert & Sullivan Very Light Opera Company’s (GSVLOC) production of The Pirates of Penzance. 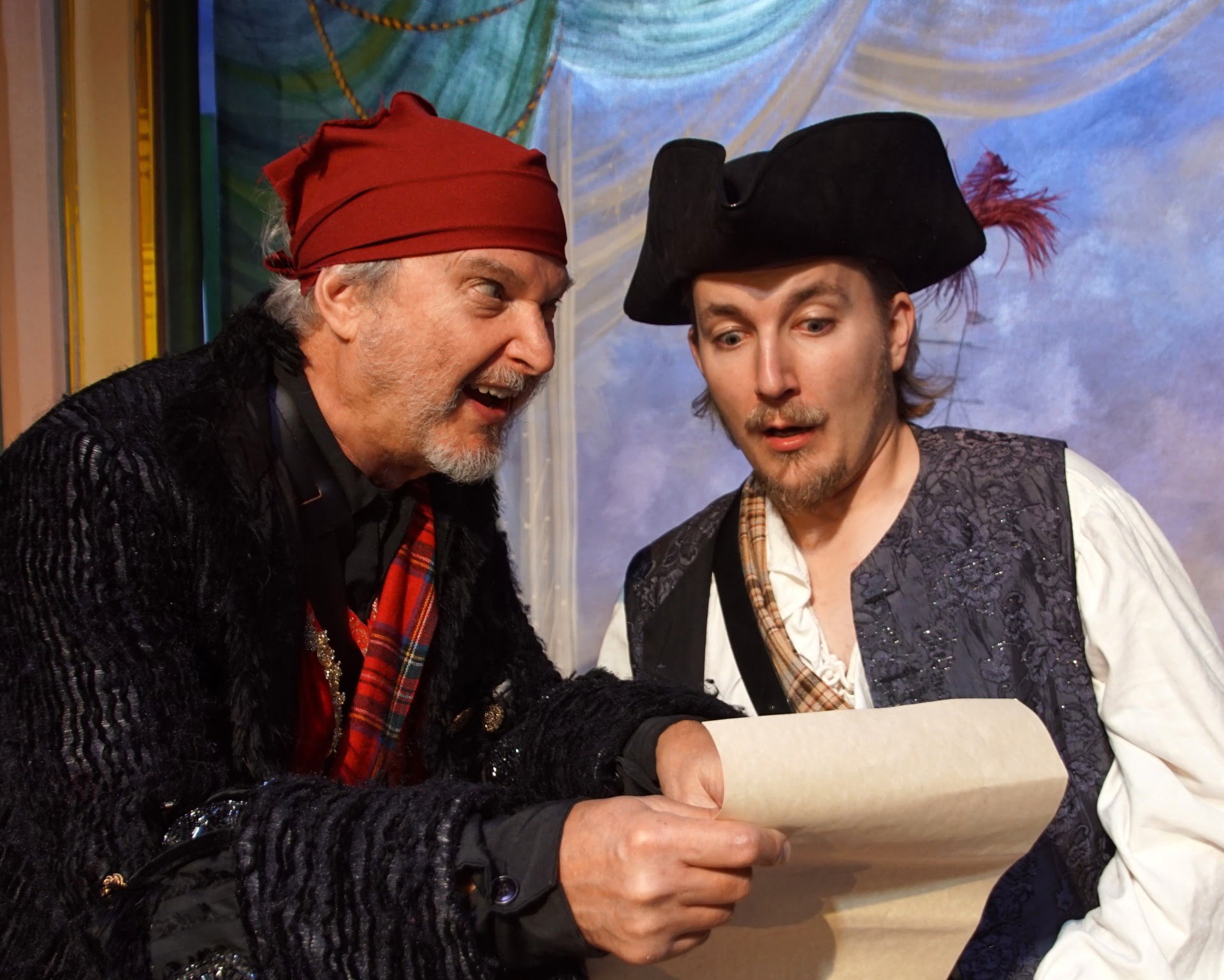 Waldyn Benbenek as The Pirate King and Seth Tychon Steidl as Frederic in The Pirates of Penzance, GSVLOC.

My sister and I love attending performances by GSVLOC. They always do a marvelous job performing at the Howard Conn Fine Arts Center, located in the Plymouth Congregational Church (parking is free in the church lot). Normally, they do one show a year in the spring, but this year they wanted to add a fall show. They chose Gilbert & Sullivan’s most popular show, The Pirates of Penzance. You’ve probably heard some of their songs – a favorite being “I am the very model of a modern major general,” all those words and careful rhymes done at record speed! Also, you might recognize, “I am a Pirate King,” and the tune of “Hail, hail, the gang’s all here!” They were brilliant librettists with songs that have catchy tunes that bounce around in your head long after you’ve left the theater!

Scott A. Gorman as the Major-General Stanley is charming. He writes in his bio that he has real life experience living in a house full of women, raising four daughters of his own! He delivers those famous fast and silly-rhymed lyrics in his signature song with great diction and a wonderful, booming voice.

Seth Tychon Steidl returns to GSVLOC from his wonderful portrayal of Robin Oakapple in Ruddigore to play Frederic, The Slave of Duty, who has the misfortune to be born on February 29, thus forcing him to serve four times as many years with the pirates until he celebrates his actual 21st birthday. His lovely tenor voice, devilish good looks, and admiration of the ladies brings him much attention. 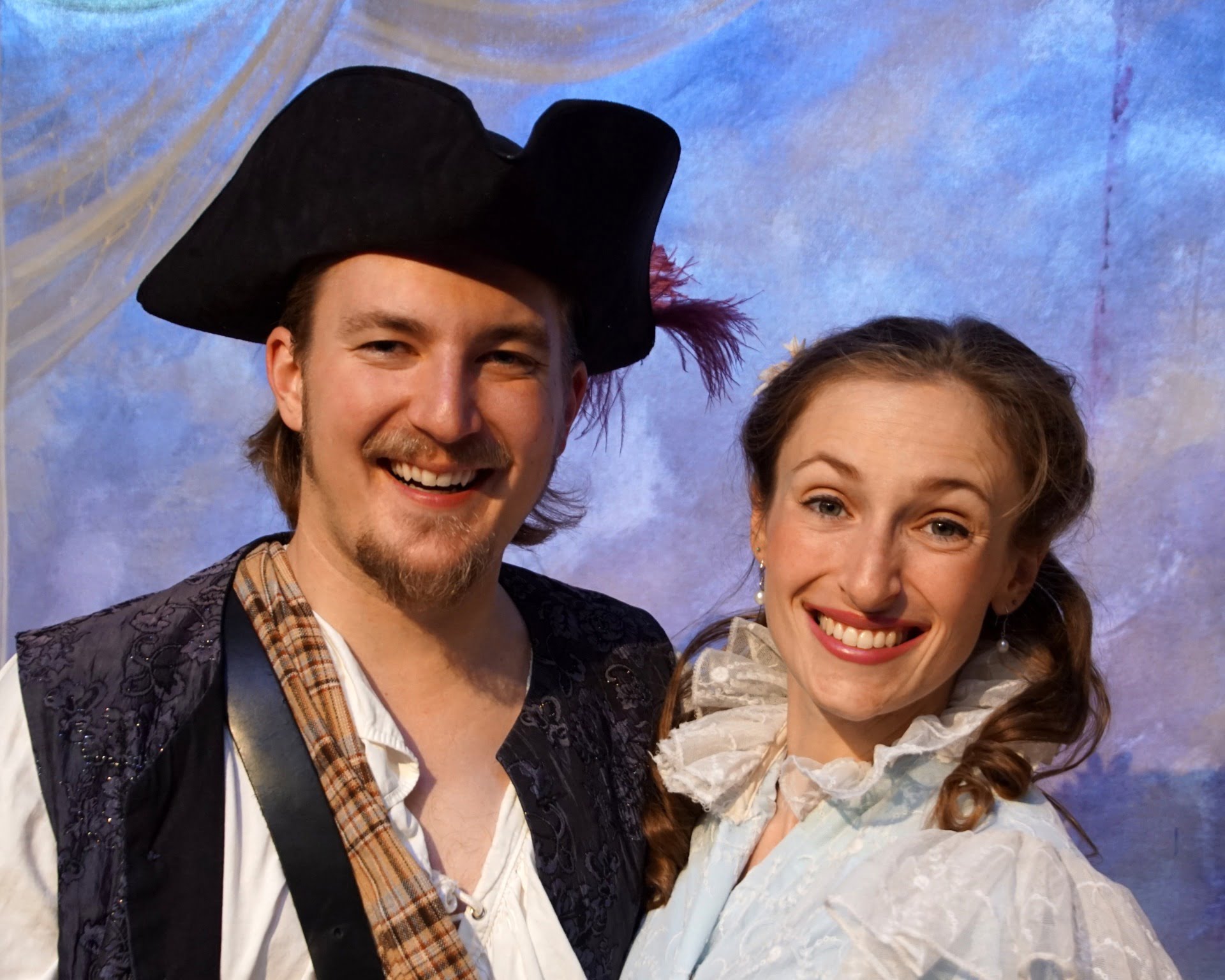 Anna Maher plays Mabel, Frederic’s love interest. She makes those high notes seem effortless, light and lovely. She captures Frederic’s heart, as well as the audiences’, in her portrayal of this determined young woman. All of her sisters lend an amazing chorus of voices.

The Pirate King is played by Waldyn Benbenek, a regular with the GSVLOC, and, according to his bio, has been singing G & S songs since he was in the 6th grade! The chorus of pirates, and sometimes police officers, were wonderful. Strong, bold voices all around. Shout out to my friend, Justin Cervantes! It was fun seeing you in this production. So many great scenes for the chorus that brought laughs and delight to the audience. Sergeant of Police was Paul Nevin, and Alexander Gerchak was Samuel. Both had great moments to shine during this production.

Lara Trujillo played Ruth, who kind of helped raise Frederik when he was captured by the pirates, and is sad to see him go. She always gets to fun character roles with great lines, wonderful solos, and eye-catching costumes. We especially liked her pirate, sort of Ren Fest, one in the second act.

Costumes by Barb Partinga were wonderful, keeping with the vintage style. The pirates looked like pirates, some of them wearing funny kilts. The ladies come out in the first act with ruffly dresses and parasols. They wear white nightgowns in Act II that could also be wedding dresses. The bases and baritones played the cops with fun old London style black uniforms with the silver buttons and rounded hats. Their choreography was fun and funny. All the choreography, by Penelope Freeh, was just right, adding to the songs, but not distracting.

The set, by Wendy Waszut-Barret, was gorgeous. It has a vintage look as well, painted to look like an old time backdrop with layers, like a pop-up book. The lighting design, by Carl Schoenborn, enhanced the set and action. I especially noticed it in the overture as different lighting highlighted different areas of the background. The orchestra, led by Randal A. Buikema, was outstanding. Absolutely gorgeous.

Check out this gorgeous production of The Pirates of Penzance by the Gilbert & Sullivan Very Light Opera Company, playing at the Howard Conn Fine Arts Center in Minneapolis, MN through Nov. 20, 2022.

Journaling Prompt: Can you do the lyrics to the Modern-Major General Song? What fun lyrics would you substitute for who you are and what you do?