Review of How The Grinch Stole Christmas at CTC, 2022 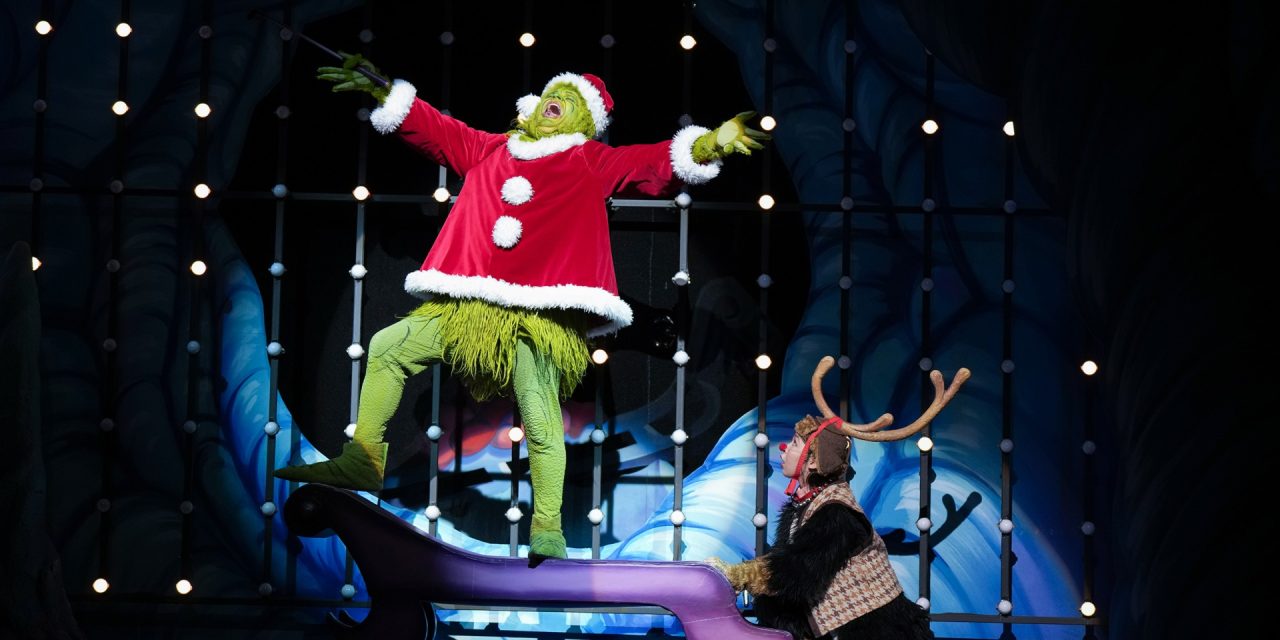 Quote of the Day: He HADN’T stopped Christmas from coming! It came! Somehow or other, it came just the same! … “It came without ribbons! It came without tags! It came without packages, boxes or bags!” … “Maybe Christmas,” he thought, “doesn’t come from a store. Maybe Christmas…perhaps…means a little bit more!” from Dr. Seuss’s How the Grinch Stole Christmas! on stage at the Children’s Theatre Company (CTC) in Minneapolis, MN through Jan. 8, 2023. 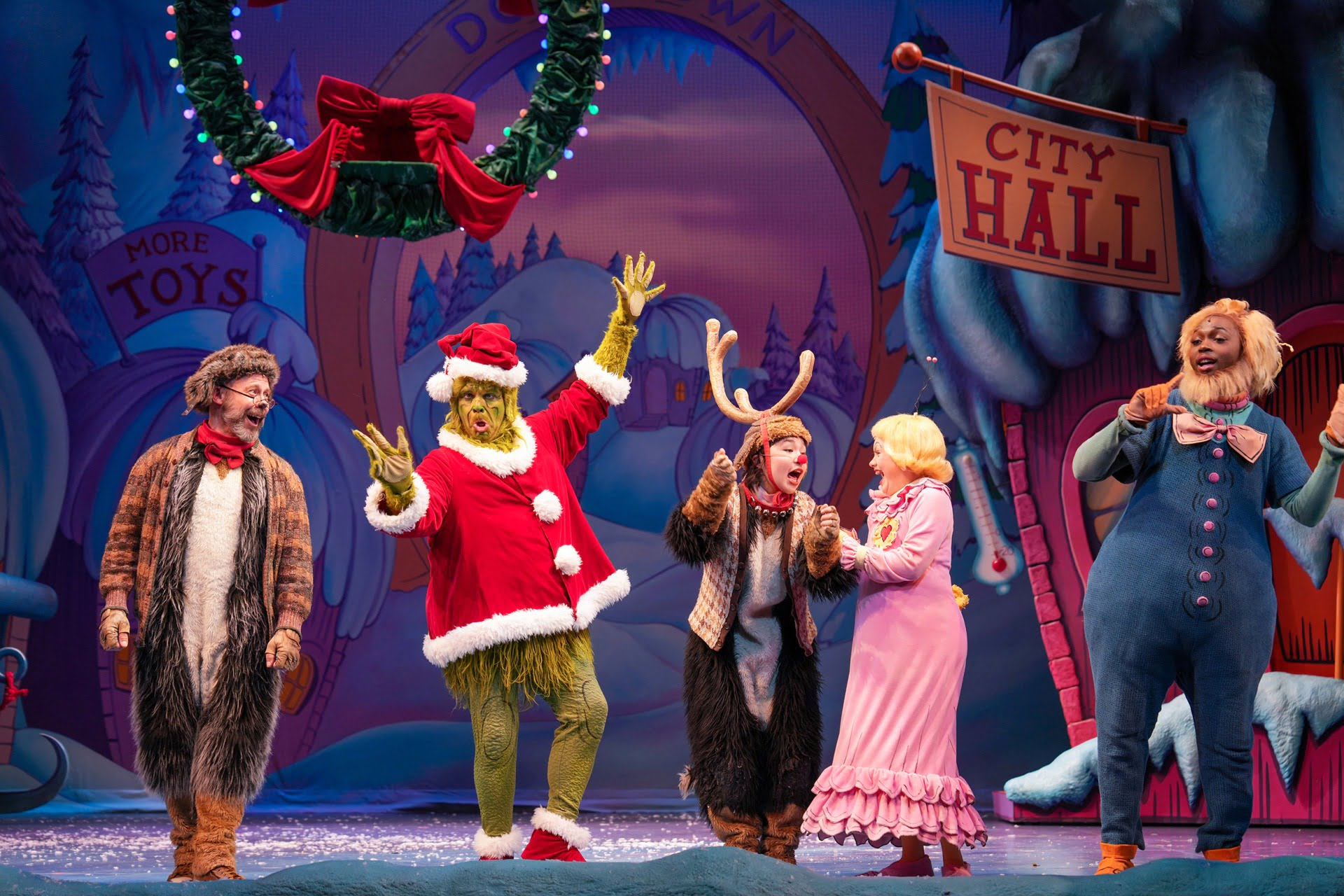 Dean Holt as Old Max, Reed Sigmund as The Grinch, Audrey Mojica as Young Max, Elsa Dungan-Hawks as Cindy-Lou Who, and Dwight Xaveir Leslie as JP Who in Dr. Seuss’s How the Grinch Stole Christmas, at CTC, through 1/8/23. Photo: Glen Stubbe

I think this is the third time that I’ve viewed and reviewed The Grinch at CTC. I’ve brought different friends and their kids. Each time, it’s magical for me, as well as the youngsters who accompany me. We make a grand day out of it. Eat at a fun restaurant, then walk around the Minneapolis Institute of Art (MIA) picking out our favorite pieces. Then, the big event. Reed Sigmund is my favorite Grinch of all time! He knows how to make the Grinch – grinchy. He knows how to pull the audience into his antics, build the suspense, making them cheer, or boo, laugh, and shout. It’s all fun. I love attending shows at the CTC with all the young audience members showing their loud and enthusiastic response to what’s happening on stage. The young men (ages 5 & 7) who accompanied me this time said the experience was “Epic!” 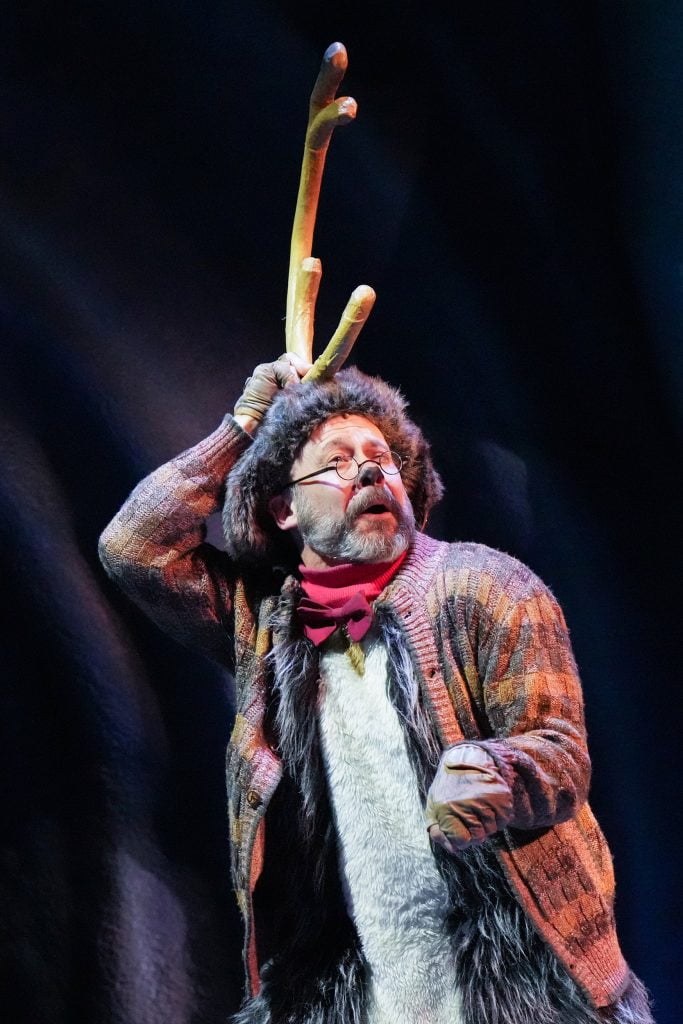 The story is narrated by Old Max (Dean Holt), the Grinch’s dog. He shows us how the Grinch went from a hate-filled outsider to one who shares the joy and spirit of Christmas with the Whos down in Who-ville. Dean is darling as Old Max. Audrey Mojica plays Young Max with all the bouncy antics of a young pup. In a previous production of The Grinch, she played Cindy-Lou Who. Autumn Ness is once again Mama Who, lending her gorgeous singing voice and warm presence to this production. Dwight Xaveir Leslie is J.P. Who. Adam Qualls returns as Grandpa Who, and Suzie Juul plays Grandma Who. Elsa Dungan-Hawks is playing a very sweet Cindy-Lou Who. 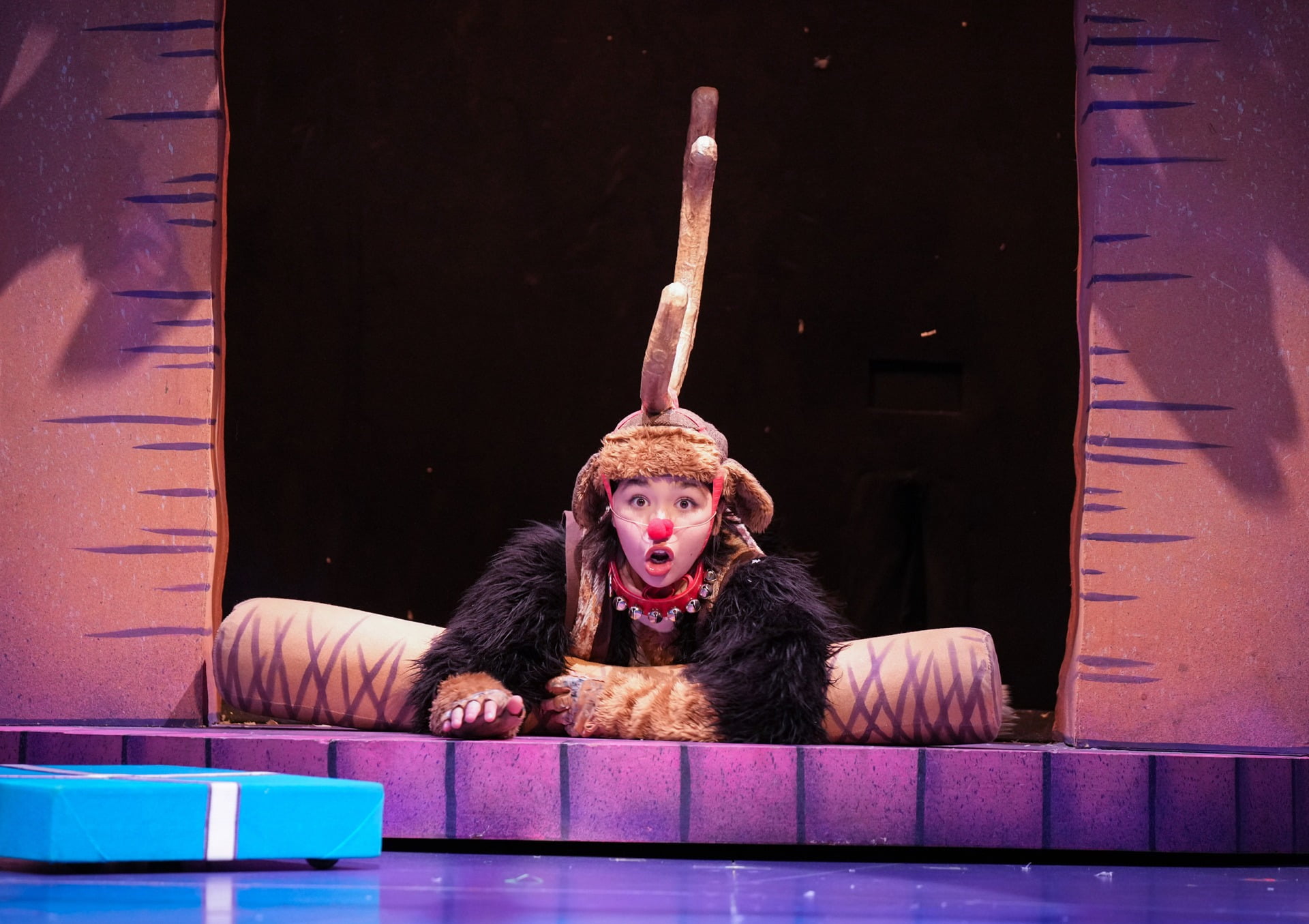 I’m including several photos of this production to highlight all the colorful, whimsical elements, from houses that look like cupcakes to rounded, Christmas ornament like costumes with bouncy, boingy head pieces! Scenic Design by Tom Butsch. Costumes by David Kay Mickelsen. Lighting Design by Nancy Schertler, and Sound Design by Sean Healey. The projections, by Craig Gottschalk, are fantastic, making the backstory of the Grinch come to life, and giving him a large and impressive presence! 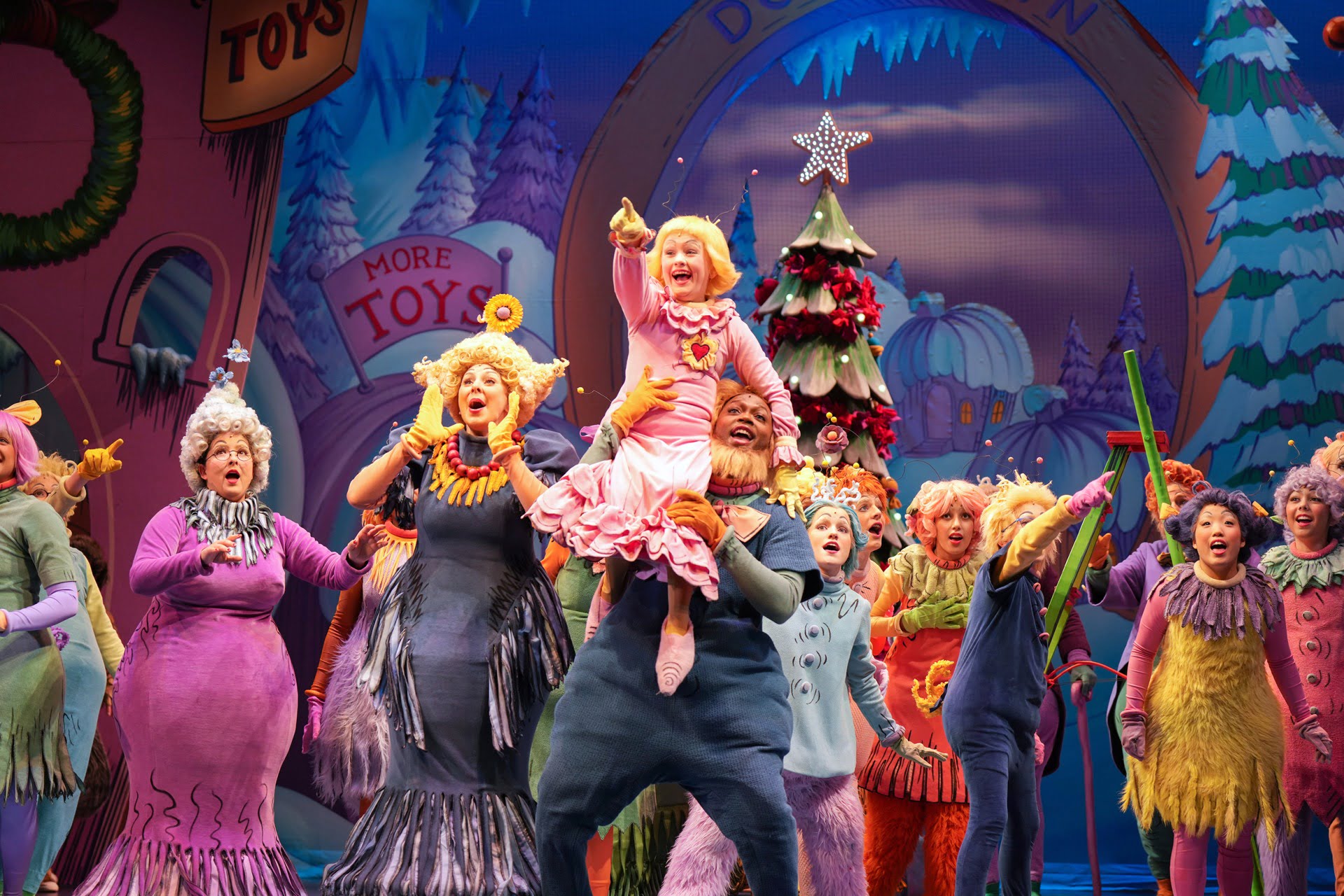 Autumn Ness as Mama Who, Elsa Dungan-Hawks as Cindy-Lou Who, Dwight Xaveir Leslie as JP Who and Company in How the Grinch Stole Christmas at CTC. Photo: Glen Stubbe

A live orchestra is in the pit at the front of the stage. I love how the youngsters like to look in there during intermission to see what that’s all about. Music direction by Denise Prosek and Victor Zupanc who is also the conductor and on the keyboard. Doug Haining, Mark Henderson, Theresa Elliot, Joe Englund, Greg Angel, and Jay Johnson make up the rest of the orchestra. The lyrics, by Timothy Mason, stay true to Seuss form, and the music by Mel Marvin keeps some of the beloved tunes from the 1966 animated film, as well as songs written specifically for this production. One of my favorite parts is near the end, when the Grinch has all the ribbons and trappings of Christmas on his sleigh, and the Whos come into the theater and surround the audience and sing “Welcome Christmas.” 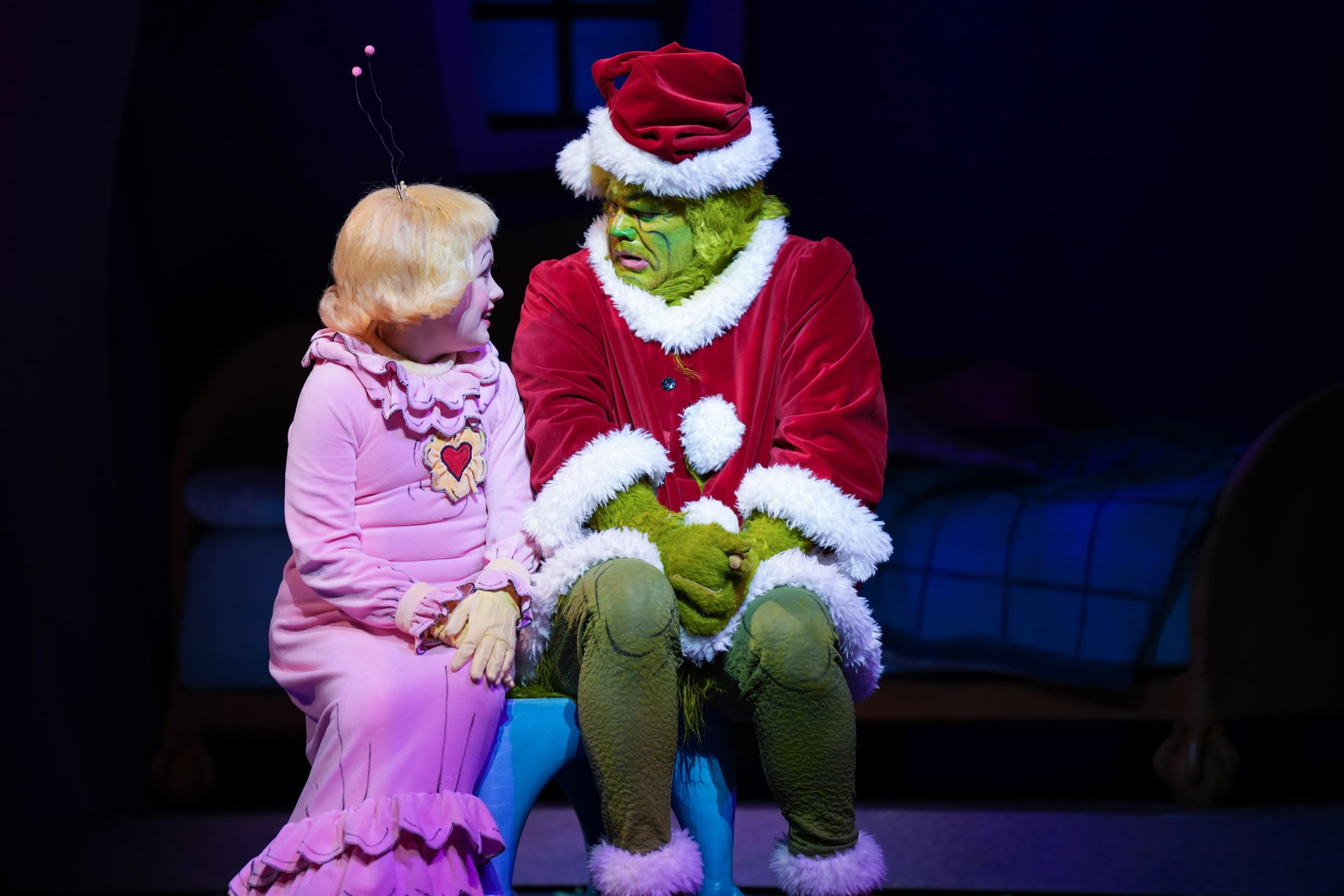 Elsa Dungan-Hawks as Cindy-Lou Who and Reed Sigmund as The Grinch in How the Grinch Stole Christmas, at CTC through 1/8/23. Photo: Glen Stubbe

The show has so many fun elements and scenes – “Last Minute Shopping,” stealing Christmas during the song “You’re a Mean One,” Young Max dangling from the sleigh, and of course, when little Cindy-Lou Who melts the Grinch’s heart.

You can see Dr. Seuss’s How the Grinch Stole Christmas at the Children’s Theatre Company in Minneapolis, MN through January 8, 2023. Get your tickets fast! This show sells out.

Journaling Prompt: What are your holiday traditions, books, movies, and games? 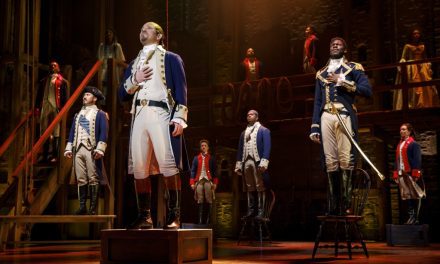