Review of Sally & Tom at the Guthrie Theater 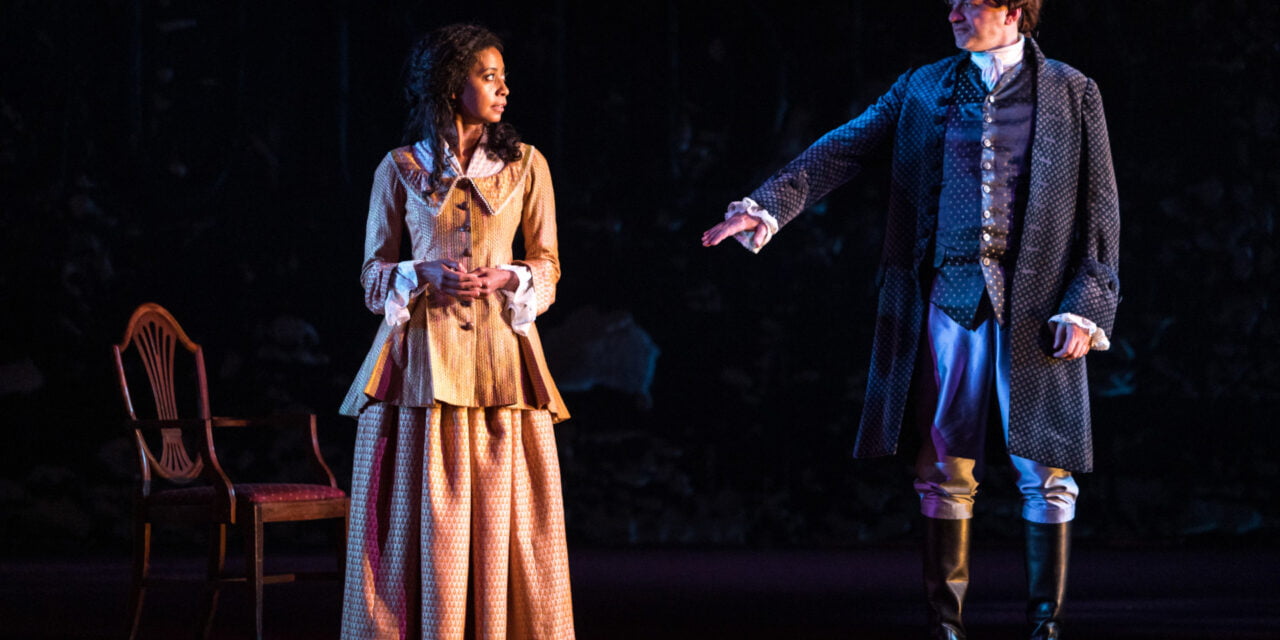 Quote of the Day: We’ve talked about making “Sally & Tom” with respect: “re” meaning “again” and “spect” meaning “see.” In this pay, we are invited to see again. To look again. To examine our history beyond the binary ideas or miseducation we’ve received. from Director Steve H. Broadnax III, on directing Sally & Tom, a world premiere new play by Suzan-Lori Parks, on stage at the Guthrie Theater in Minneapolis, MN through Nov. 6, 2022. 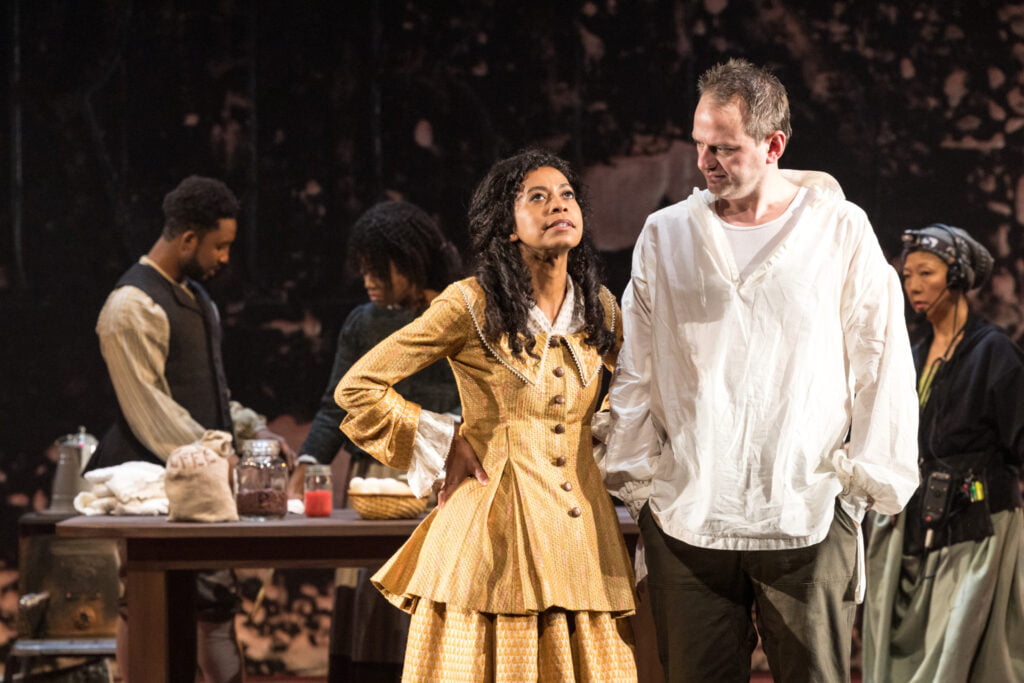 What a thrill to be among the first audience to see Suzan-Lori Parks’ new play Sally & Tom. The cast was outstanding. The story captivating and thought-provoking. What Parks has written is a play about making a play about American history, about two people whose relationship is controversial, the material provocative. I wanted to say it’s Hamilton meets Noises Off, but it’s not nearly so epic nor funny, but it has elements of both. Parks offers us a new way of looking at history and our founding fathers and mothers. She also gives us a glimpse at what happens backstage – the relationships and foibles, all the moving parts, actors who are also designers, costumers, props masters, advisors and confidants. We see the playwright herself wrestling with the material, characterization, what to leave in, what to take out, making changes up to the last minute before opening night. And, all the while navigating her own personal relationship with the leading man. 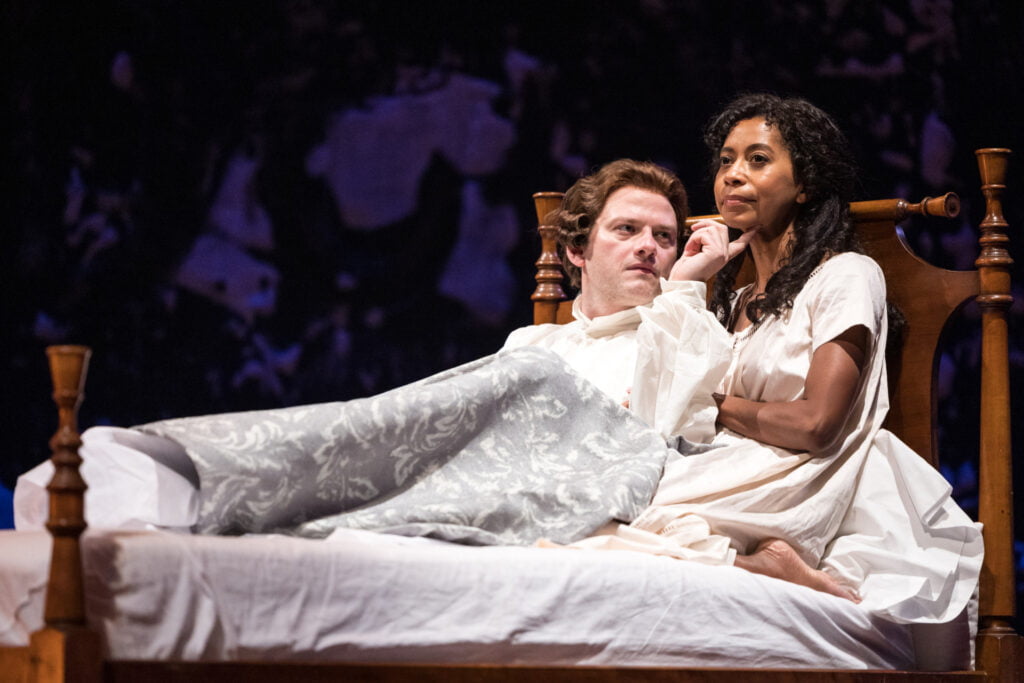 In the interview in the program for Sally & Tom, Parks states, “As a writer, I really work to walk in the shoes of the character as much as I can, whether they’re a white guy like Thomas Jefferson or a Black person like Sally Hemings.” She portrays that through the character of the playwright Luce (Kristen Ariza) who also plays Sally. She creates parallels to the woman of the past with the present day playwright. She is in a relationship with the man who plays Tom (Luke Robertson). The relationships mirror each other in the pull for power and opportunity. 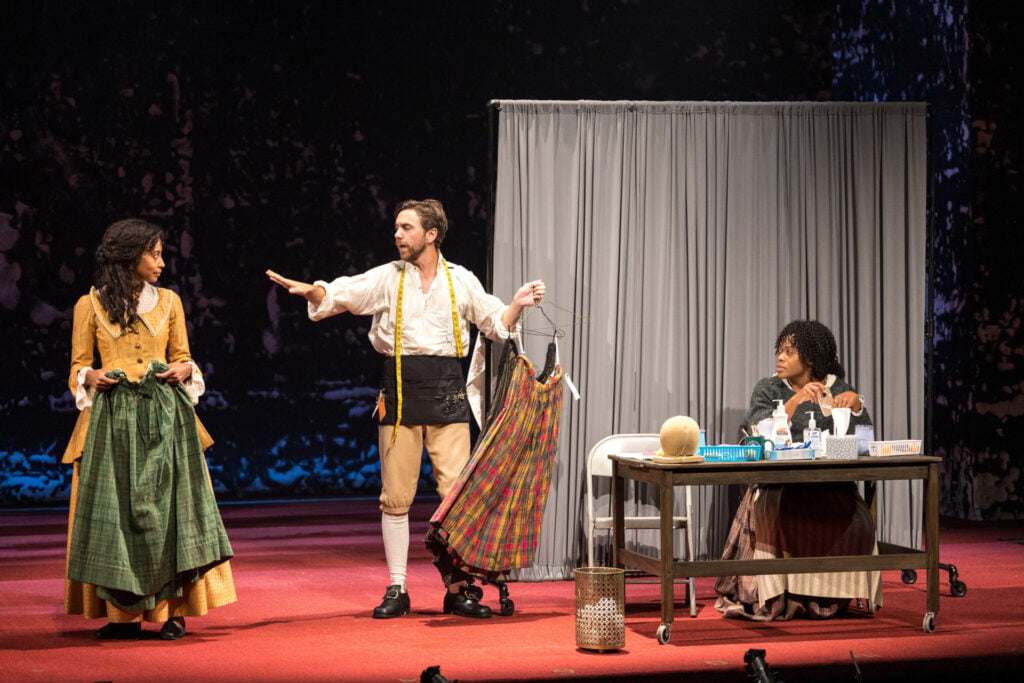 All the actors play duel roles in this play about a play. Amari Cheatom plays Kwame, a gifted actor who is portraying James, Thomas Jefferson’s valet and chef. James is Sally’s brother. He’s given the opportunity, in Luce’s play, to speak his mind and show his anger about their situation, Tom’s possession of Sally and of himself. (That really was a terrific speech. The audience applauded long and loud.)

Sun Mee Chomet and Kate Nowlin play Jefferson’s daughters. They are still young when their mother dies and their dad takes up with Sally. Chomet also plays Scout, the stage manager for the play. She has lines about wanting to be an actor and having her voice heard.

Gillian Glasco is Maggie in present day, friend and confidant to Luce, and Mary, Sally’s sister. She worries that families will be split apart when Jefferson leaves for New York and congress. Mary is married to Nathan (Kadeem Ali Harris, who also plays Devon) and they talk about the difficulties of being together and being owned. They don’t know what their future will be. Devon starts a relationship with Geoff (Daniel Petzold) who is the actor who plays many parts in the play, and is often a funny character in the off stage scenes.

All those names might seem confusing, but it’s not. It’s always clear what character they’re playing, if it’s an on stage moment, or off. I like the stops and starts, the mingling of present with past, the discussion over the content and creative process. The on stage characters get the great speeches. The off stage ones have the relationships.

Director Broadnax brings out the best in these actors who are playing many parts and showing us the complexities of any relationship and the difficulties of telling an American story. Riccardo Hernandez has created a fascinating set that transforms between on stage and off stage scenes with a poignant backdrop of E Pluribus Unum, Out of Many, One. Gorgeous costumes, both period and contemporary, by Emilio Sosa. Lighting design by Alan C. Edwards and Sound Design by Curtis Craig. The show runs 2 hours and 45 minutes including intermission, but it doesn’t feel that long. It moves along at a fine pace, and the story is captivating.

Journaling Prompt: Where do you go to sort out questions in your own musings and to navigate the creative process?

Review of Tales from Hollywood at The Guthrie