Review of The Humans at Park Square Theatre 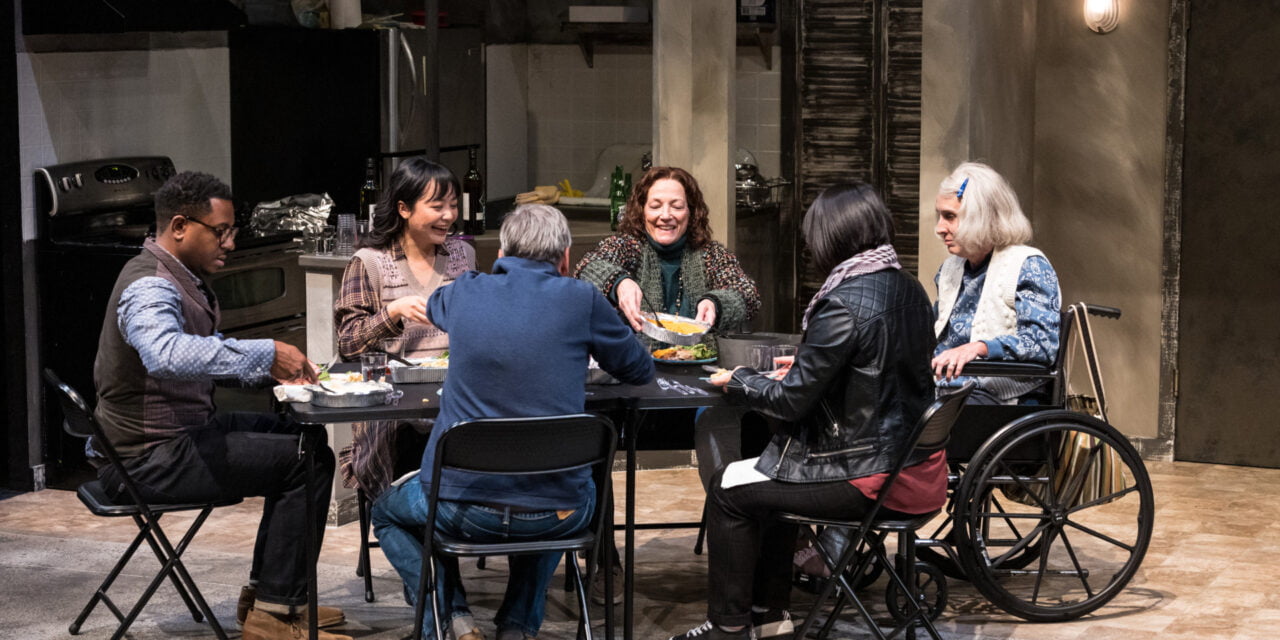 Quote of the Day: What I love about “The Humans” is that it fully captures the joy, humor, and dysfunction of family in all its nuances. There are many Asian adoptees around the country, particularly in Minnesota, and portraying a family of White parents with Korean adoptee daughters allows us to embrace all the diversity that family can be. Lily Tung Crystal, Director of The Humans at Park Square Theatre in St. Paul, MN, playing through October 9, 2022. 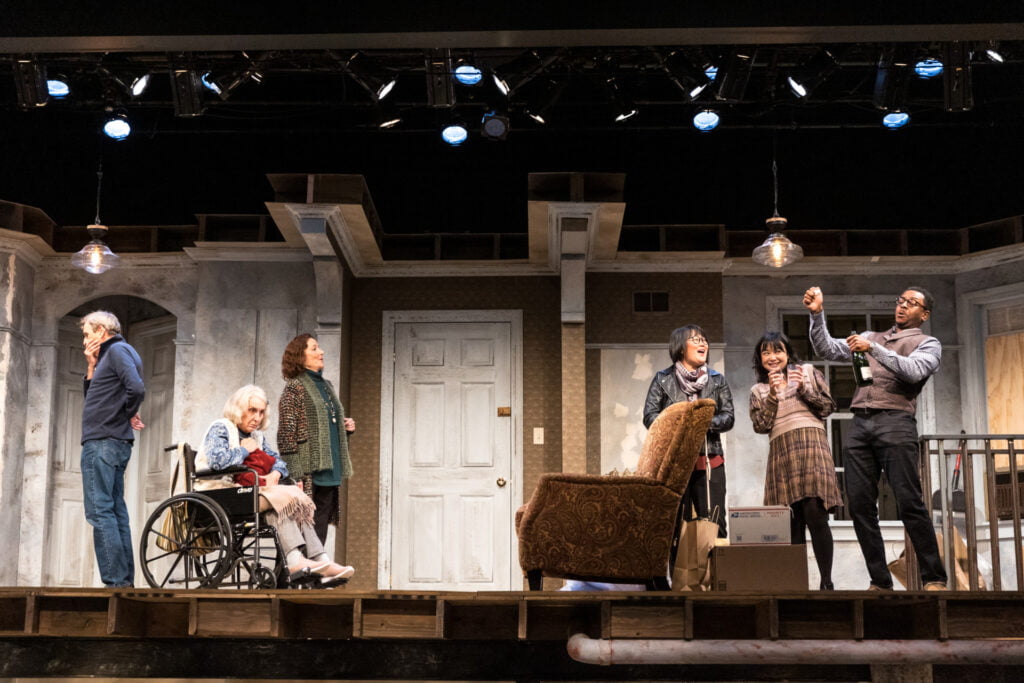 The Humans written by Stephen Karam is a 2016 Tony Award-winning play and finalist for the Pulitzer Prize the same year. It is about a family getting together on Thanksgiving, with all its complexities. I think most of us can relate to this drama. Brigid Blake (Dexieng “Dae” Yang) and her boyfriend Richard (Darrick Mosley) have recently moved into an apartment together in Chinatown in New York. It’s a rundown main floor apartment with a sublevel. Upstairs is the main entrance with a bedroom, closet and bathroom. A winding staircase brings you to the sublevel with the kitchen and living room space. Family members have to trot up and down the staircase to use the bathroom or get cell service. This is complicated for grandma, or Momo (Angela Timberman), who is in a wheelchair and suffering from dementia. They use a service elevator to bring her down to the lower floor. The mother, Deirdre Blake (Charity Jones) also struggles with the stairs, her daughter’s living arrangement, and the whole family dynamic. Her husband Erik (John Middleton) seems distracted throughout the event, running upstairs to check his cellphone, arguing with various family members, and equal parts fussing about his mother, Momo, and getting frustrated with her. He seems agitated throughout the dinner. He has some distressing news, and when he finally spills it, the pretenses of a happy family dinner disintegrate. Brigid’s sister Aimee (Laura Anderson) is also at the apartment, but keeps herself somewhat separated as she isn’t feeling well and is sad about a recent breakup with her girlfriend. 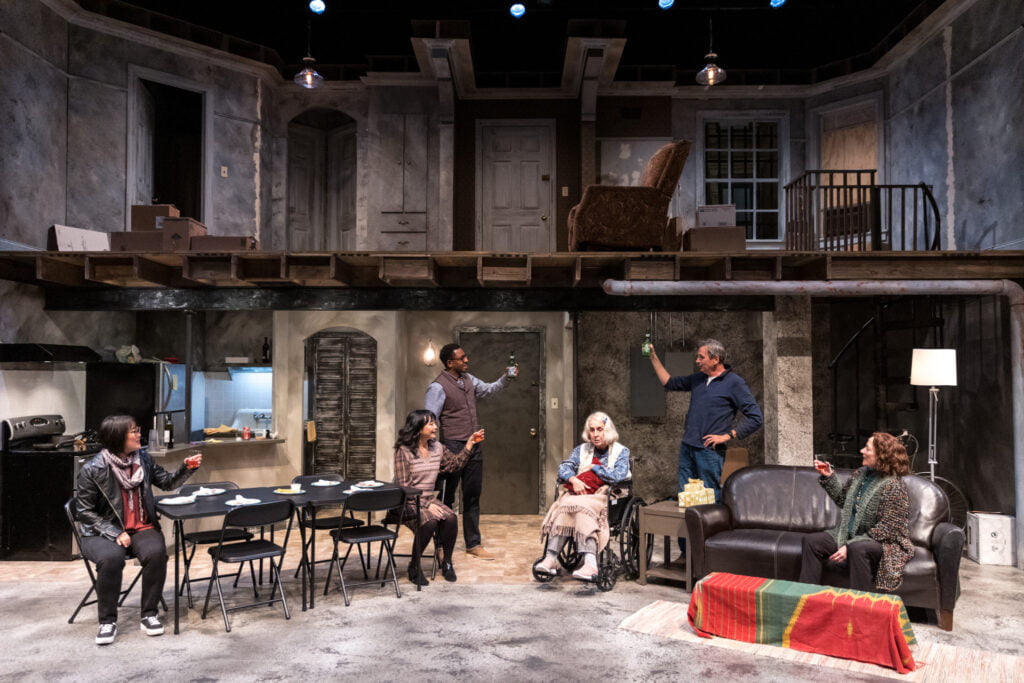 The set itself (designed by Erik Paulson) plays a large part in this production. With the above mentioned complications of two floors, stairs, and dilapidation. It also makes eerie noises – creaking, loud elevator, echoes in the hallways – and the lights are unreliable. The upstairs gives people a reason to escape the family (to use the bathroom or check their phones) which gives other family members an opportunity to talk about them. (Sound familiar?) We’ve all done that. So many common family scenarios come up at this dinner, family values, religion, illness, relationships, failings, money, judgement, and memories. Some parts made me laugh out loud, others left me nodding in sympathy, while still other parts left a small slash to the heart. 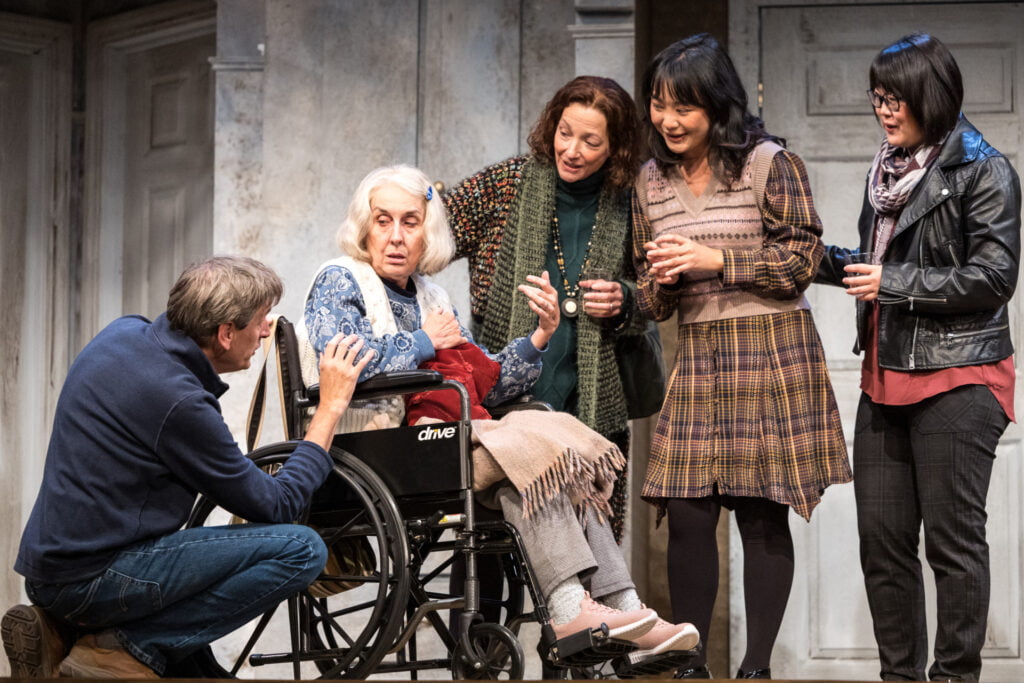 Stephen Karam does a remarkable job of showing us the complexities of families in this distracting and challenging world. He holds a mirror up to us and lets us examine our own relationships. It’s hard to see grandparents/parents aging and becoming distant from us through their illnesses. It’s hard for young people to accept the human frailty of their own parents. It’s really hard for parents to step back and allow their children to live and make mistakes as adults. If the reason for our words and actions to and about each are out of love, love wins out. We accept each other for our flaws. We care for each other through failings of mind and body, and we lift up the good. We cherish the time together and the memories we create and cling to when someone is no longer with us. 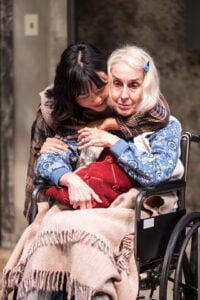 You can see The Humans at Park Square Theatre in St. Paul, MN through October 9, 2022. It’s a realistic drama with humor and heart. I think you will like it. The acting is tremendous, the set stunning, the lighting (designed by Karin Olson) adds to the drama, and the direction by Lily Tung Crystal bring out the bittersweetness of family.

Journaling Prompt: What are some memories of family dinners, especially around the holidays?