Review of Sweat at the Guthrie Theater 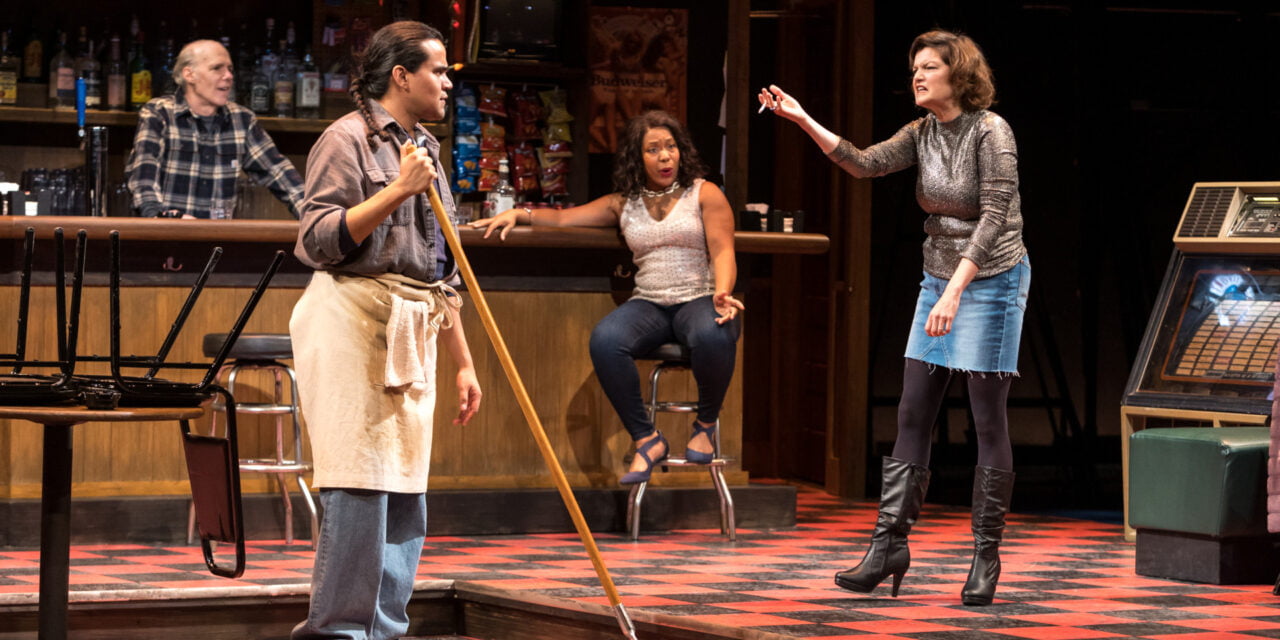 Quote of the Day: For me, theater is not a place. It’s a community of people. Tamila Woodard, Director of Sweat, by Lynn Nottage, at the Guthrie Theater.

Reading, PA is the setting for Nottage’s Pulitzer Prize-winning play Sweat, flipping between the years 2008 and 2000 when major changes happened at Olstead’s metal tubing factory that affected jobs, friendships, and the lives of the residents. The play opens with interviews between two young men and their parole officer Evan (Darius Dutch) in 2008. The young men, Jason (Noah Plomgren) and Chris (Terry Bell) have recently run into each other after their release. Once friends, they are now uncomfortable with the confrontation. Immediately, the audience wonders what happened to break up their friendship and send them to jail. 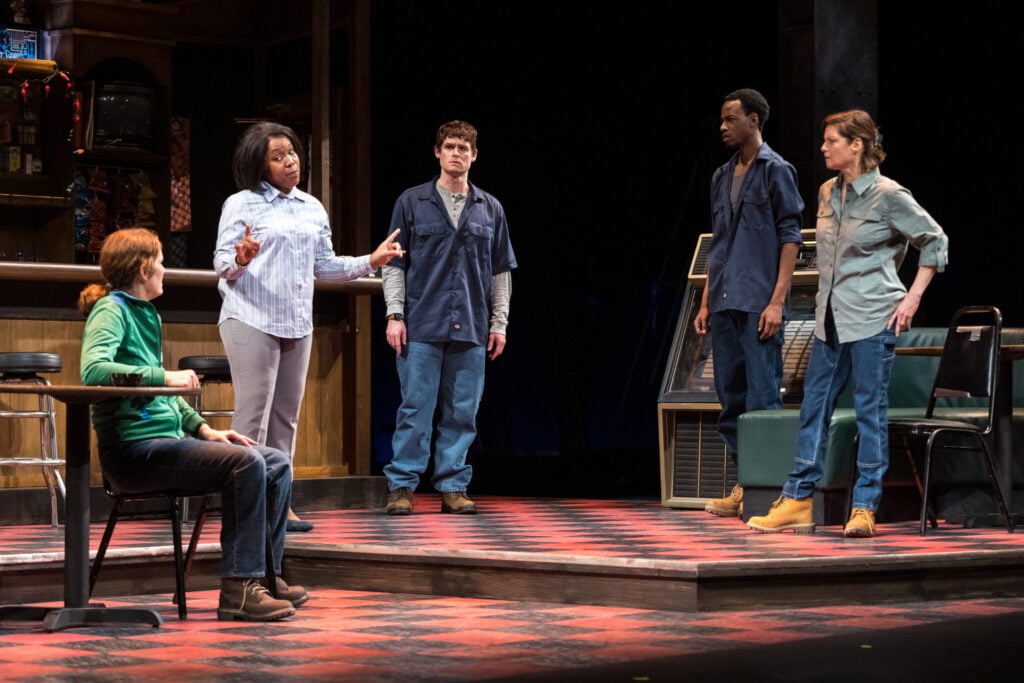 The next scene is in a local bar in 2000 where three women who are friends are out celebrating a birthday. Tracey (Mary Bacon), Cynthia (Lynette R. Freeman), and Jessie (Amy Staats) laugh and joke about work, their relationships, where they live, and also dream of making things better. One of them will be promoted soon, which changes their relationship with each other. When the boys (Chris & Jason) walk in, you quickly learn that working at Olstead’s is a family tradition. So many of their friends and neighbors have been working there for decades. 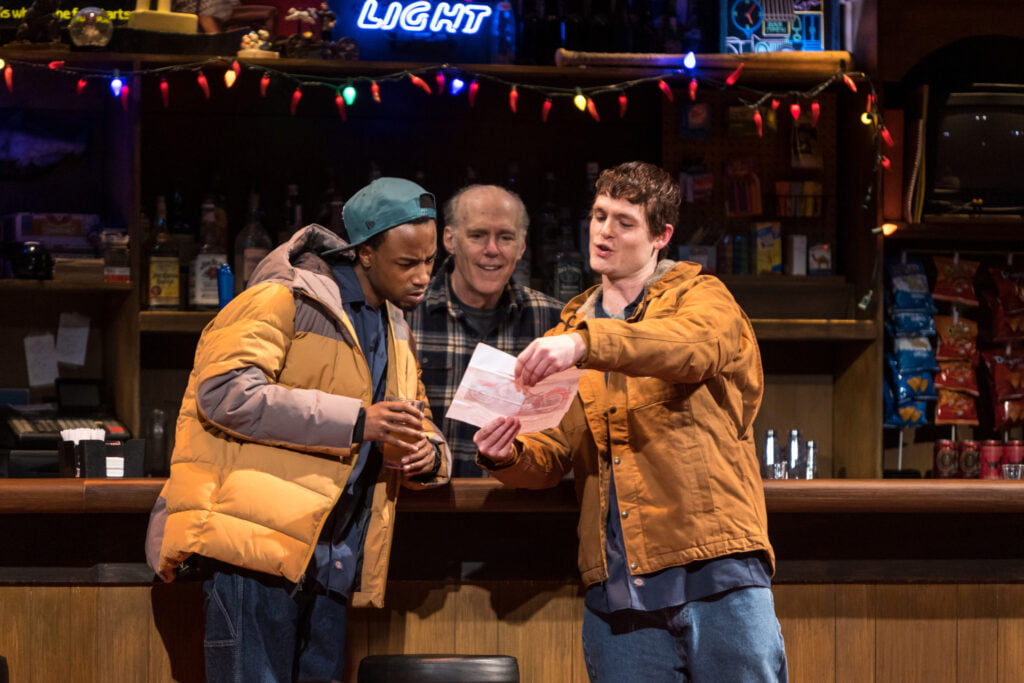 The bar tender Stan (Terry Hempleman) knows everyone and their story, naturally. He’s also well aware of what happens at the factory because he worked there until he suffered a serious injury. He knows how lives and livelihoods are affected by the factory and the decisions that are made there. His employee Oscar (Antonio Rios-Luna) represents the Hispanic community. He’s also trying to make a living, but when he dares to cross the picket lines, he nearly loses everything. 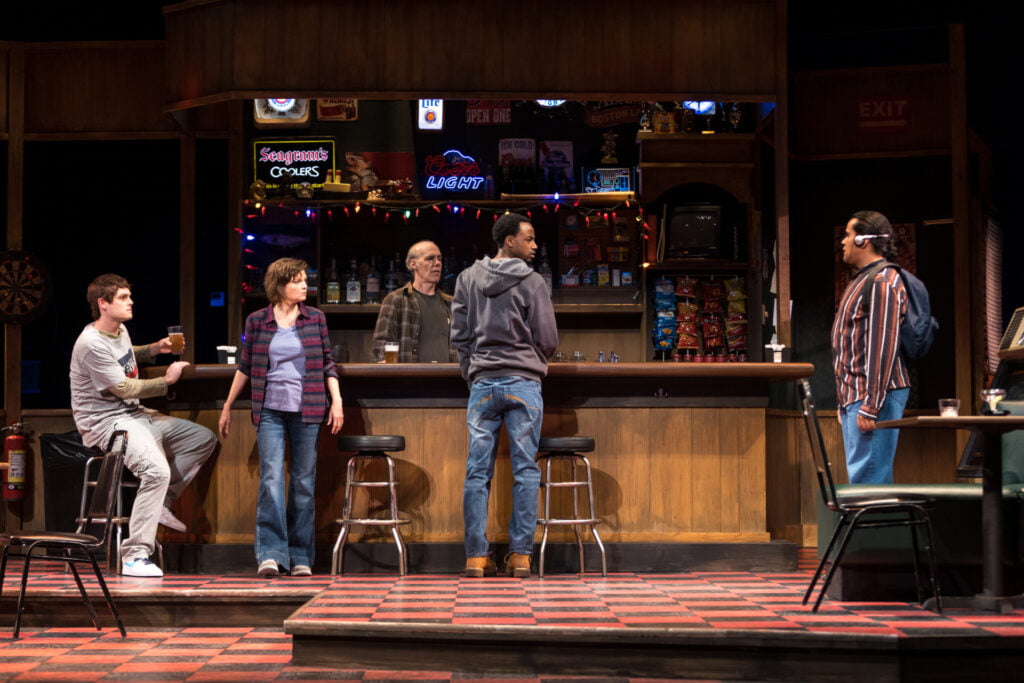 Cast of Sweat at the Guthrie Theater. Photo: Dan Norman

Director Tamila Woodard did a great job of building tension in this play. We go from wondering what happened to two friends, who ended up in jail, to seeing the changes in friendships between the women, and the fall of the economy for the entire town as changes in the metal industry eliminate jobs. At the beginning of pivotal scenes, headlines flash across the set. Three lines of words scroll across, and sometimes images on televisions give you a sense of what is happening in the world during the setting of this play. It’s a bit chaotic. Some of the headlines have national impact, while others are from local events. It makes you realize that so much happens around us from the events at a local bar to national policy, and it all affects your personal life in some way.

Sweat is a play that makes you think and will stimulate conversation long after you leave the theater. Lynn Nottage interviewed many people before writing this play and used their stories and experiences to show the rise and fall of the American dream. This play is about a community, the people and their relationships, what happens when one is promoted over another, racial tension, fear of job loss and livelihood. So much to process. Not all questions are answered, nor problems resolved. We wondered why exactly Chris ended up in jail and what happened to his dad Brucie (Ansa Akyea), and what still gives the residents of Reading hope for their future?

You can see Sweat at the Guthrie Theater through August 21, 2022. Bring a friend so you can have a discussion afterwards!

Journaling Prompt: What major life changes have you, or a loved one, had to make due to changes in the industries or your livelihood?

Review of The Three Musketeers by Walking Shadow Theatre Company

M is for Marie Howe

U is for Understudy