Review of Something Rotten at Lyric Arts 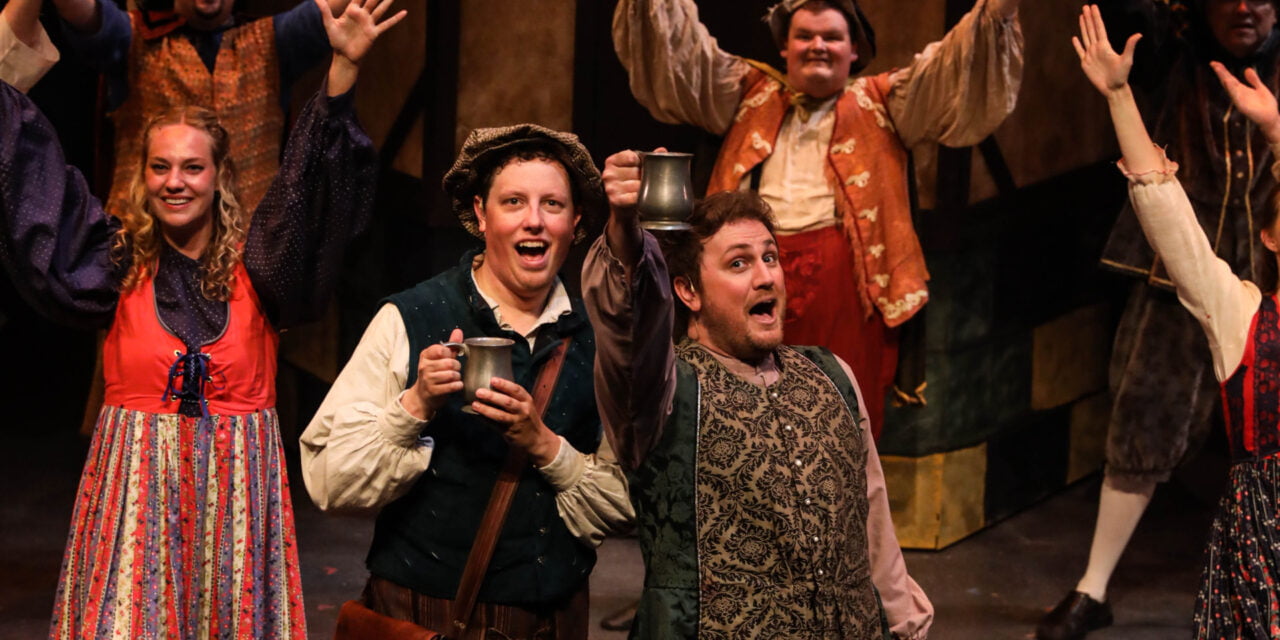 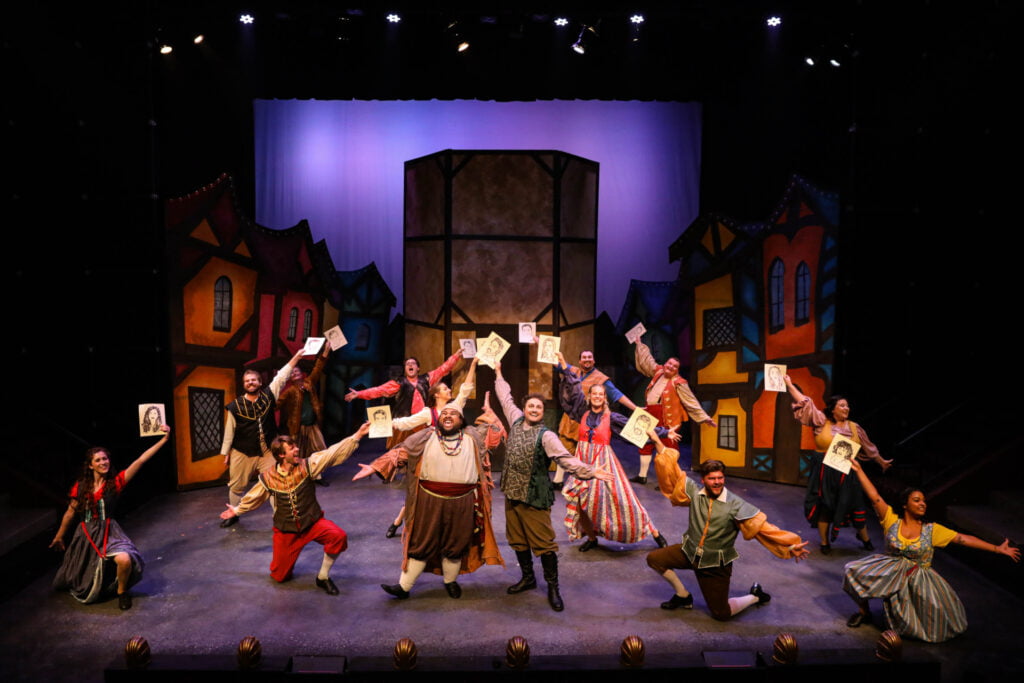 Something Rotten is a fast-paced musical that pokes fun at other musicals and Shakespeare. It’s pure escapism, and we love it. The lyrics are clever, the music is catchy, and the characters are quirky and lovable. The Bottom brothers, Nick (Kyler Chase) and Nigel (normally played by Grant Hooyer, covered by Alex Stokes on the night we saw the show) are trying to write the next hit for the stage. Their biggest, and most annoying, competition is the Bard himself, Will Shakespeare (Carl Swanson). They have a great song entitled God, I Hate Shakespeare, that says it all. Actually, it’s Nick who hates him (and is secretly jealous), and Nigel confesses to admiring the playwright. When Nick consults a soothsayer, Nostradamus (Justin Betancourt), things get a little mixed up. He says that Shakespeare’s next play, his greatest of all time, will be “Omelet.” Nostradamus also tells Nick that musicals will be the wave of the future in a hilarious song called A Musical. Melodies and phrases from musicals throughout the decades are in this number, along with dancing, and much laughter. I’m a huge musical theater fan, and I’m sure I didn’t catch all the references! 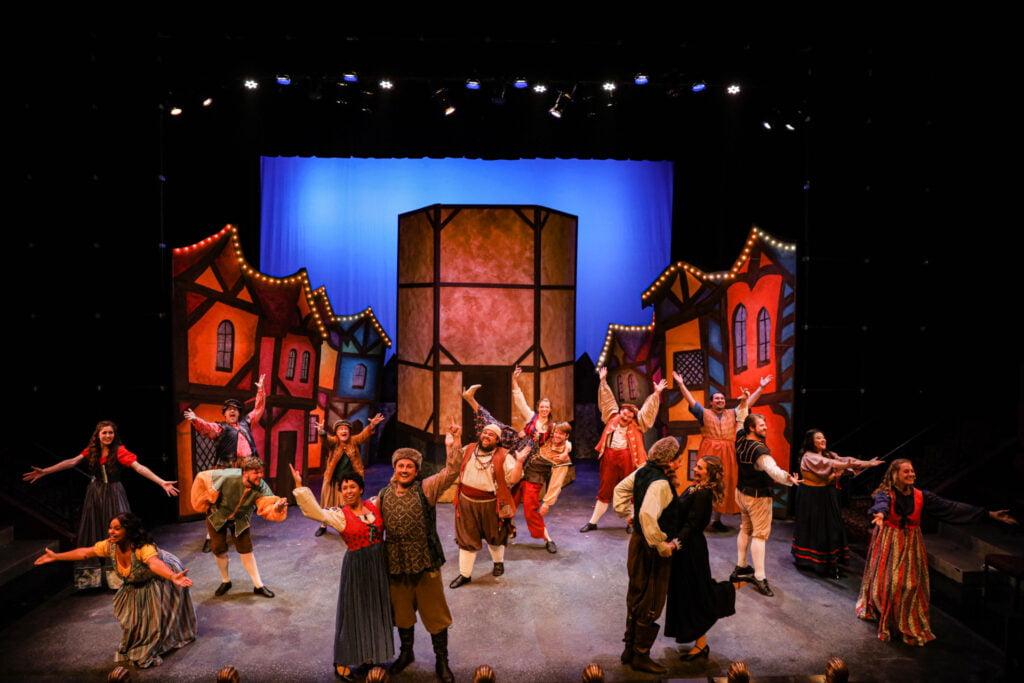 Nick’s wife, Bea Bottom (Becca Hart), tries to help out the boys by going out to get some meat with her bow and arrow. She gets a job, but has to disguise herself as a man. She has many great lines and a wonderful song called Right Hand Man. Becca Hart is one of my favorite actors in the Twin Cities. She gives Bea all the heart, humor, and musicality she deserves. She has a great line about women reaching equality in the new century, 1600! We’re still working on it, Bea!

While Nick is working hard on his egg musical, his brother Nigel is writing poetry and falling in love with Portia (Courtney Vonvett) the Puritan-like preacher’s daughter. Portia’s father, Brother Jeremiah (Eric Knutson), is against music and flowery language and his daughter dating a Bottom brother! 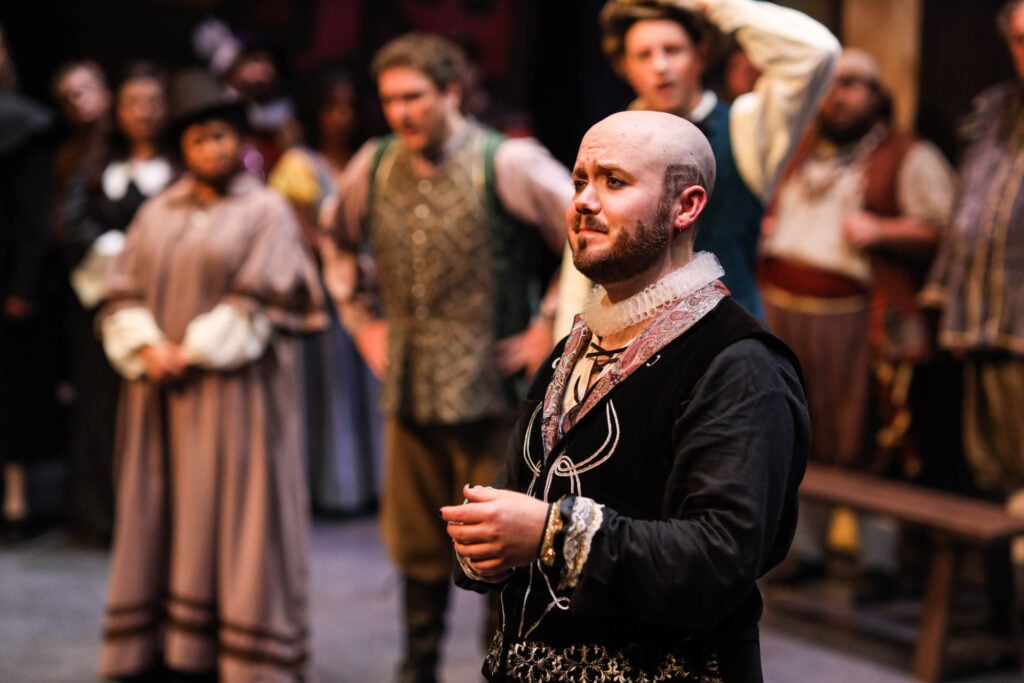 Carl Swanson as Will Shakespeare and cast of Something Rotten at Lyric Arts. Photo: Molly Weibel

Will Shakespeare is the rock star of the times. Women swoon over his attention, and young men want to be like him, which is played out in his entrance and a fantastic song called Hard to be the Bard. Carl Swanson does a great job of making him the sexy bard that he is, along with humor, and a bit of sneakiness. You see, Will was known for “borrowing” other people’s work and making it his own, as you’ll see in this show. 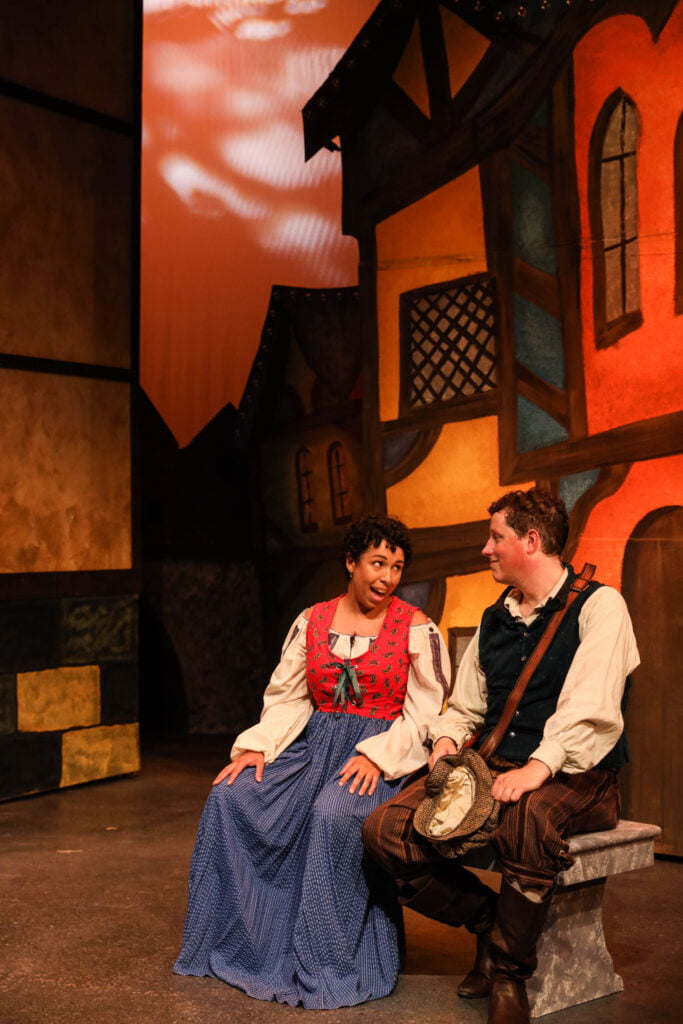 Kiki Laureano as the Minstrel and Grant Hooyer as Nigel Bottom in Something Rotten at Lyric Arts. Photo: Molly Weibel

Kiko Laureano does a great job of playing the Minstrel who draws us into the story and offers some narration. Kyler Chase was terrific as Nick Bottom. Alex Stokes stepped into the role of Nigel Bottom on the night we saw the show, and he was darling. The audience gave him loud applause! Justin Betancourt nailed it as the goofy Nostradamus. The entire ensemble was terrific, keeping this high-energy show going strong for the full two hours. They brought out the laughter and heart of a show that encourages the audience to appreciate musicals, celebrity, and how hard it is to be successful in the business of show.

You can see Something Rotten at Lyric Arts in Anoka, MN through August 15, 2022. Get there, if you can. I expect this one to sell out some of it’s performances. This is one to see with friends for a great evening of entertainment.

The Arts are Alive!