Review of Oklahoma! Broadway tour at the Orpheum in Minneapolis 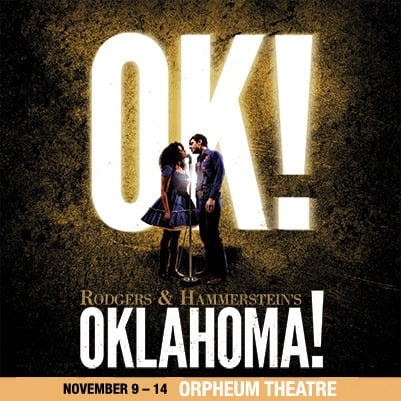 Quote of the Day: Conversation between Laurie and Aunt Eller at the end of the musical Oklahoma!:

Laurie: I don’t see why this had to happen, just when everything seemed, so fine.

Aunt Eller: Don’t try, honey. You gotta get used to havin’ all kinds of things happenin’ to you. You got to look at all the good on one side, and all the bad on the other side, and say ‘Alright, then,’ to both of them. Lots of things happen to a woman – sickness, or being poor, and hungry even, being left alone in old age, bein’ a-feared to die. You gotta be hearty. 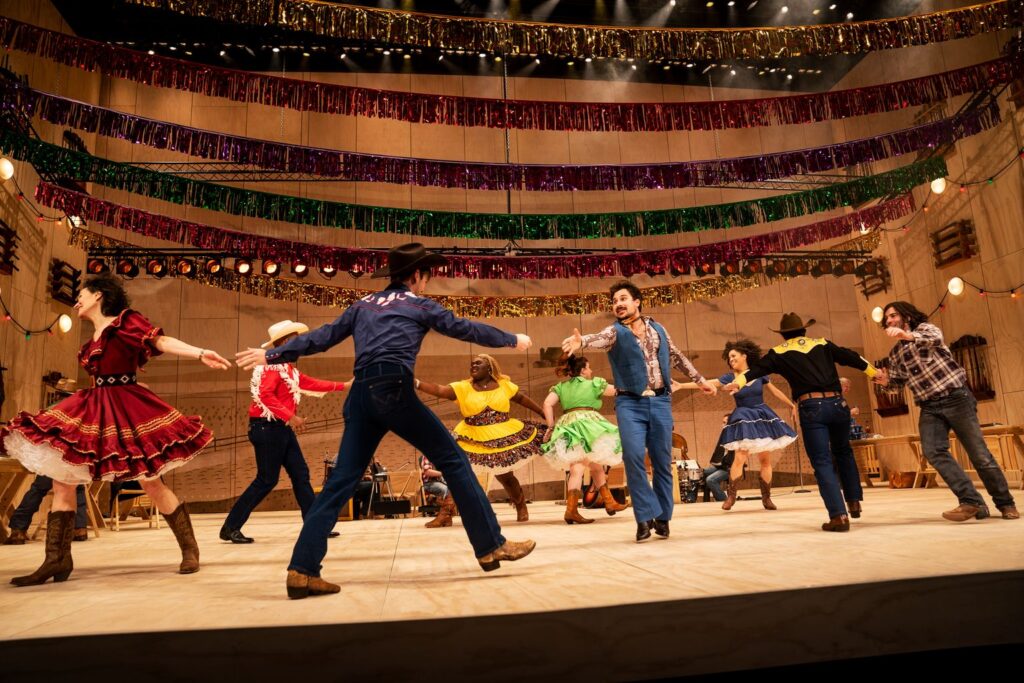 This is not your grandmother’s Oklahoma! When the show ended my friend Marina, who attended the show with me, looked at me and said, “I don’t think I’ve seen Oklahoma before.” I answered back, “I don’t think anyone who is in the audience thinks that either after seeing this production.” It’s been several years since I’ve seen a production of Oklahoma! I missed it when the local high school did it last spring. It’s often done in community theaters. I watched the 1955 movie adaptation to be able to make comparisons. This new Broadway revival, directed by Daniel Fish, gives it a whole new perspective to this Western Musical. Not that the original is all happiness and sunshine. All of the lines and songs are the same in this production, but the delivery is different, setting a much darker tone. The focus is more on these themes: women as possessions, obsessive love, and gun violence.

The storyline is the same. Curly (Sean Grandillo) enters singing “Oh, what a beautiful morning,” and professing his love for Laurey (Sasha Hutchings). Aunt Eller (Barbara Walsh) tells him to make his intentions known or risk losing her to Jud Fry (Christopher Bannow) the hired hand, who is darkly obsessed with her. In this production, Jud is portrayed as a lonely outsider. Bannow gives him more depth and sympathy. So, when Curly turns on Jud, he seems just as evil. In one of the creepiest parts of the show, the theater is completely dark, while Curly sings “Pore Jud is Daid” to Jud, in essence, telling him to hang himself in the smokehouse where he lives. The gunshots in this scene made me jump and set my heart pounding!

The show keeps its humor, too, with the comedic love triangle of boy crazy Ado Annie (played by a Black trans woman named Sis), a traveling peddler Ali Hakim (Benj Mirman) and stupid, but lovable, Will Parker (Hennessy Winkler). Sis brought the house down with her first big number, “I’m just a girl who cain’t say no,” producing a spontaneous standing ovation. The crowd loved her. And, honestly, it was one of the best parts of the show for me, too! 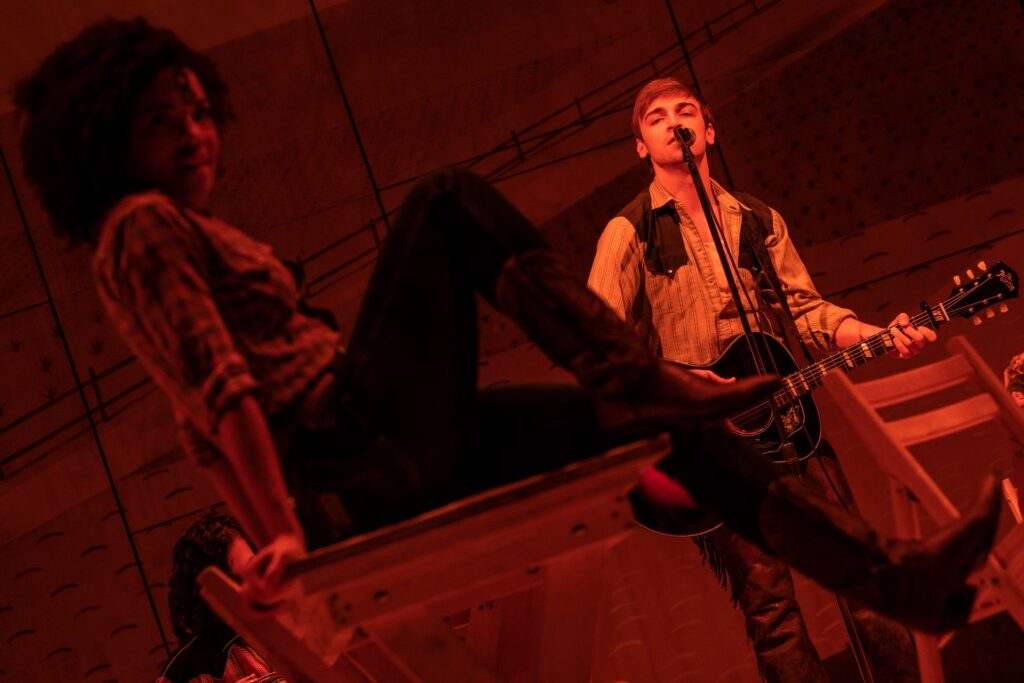 Instead of ending Act I with the “Dream Ballet,” they open Act II with it. Gabrielle Hamilton performs the dance sequence as a modern dance to an angry rock beat. Daniel Kluger provides new arrangements and orchestrations to this revival. The music is performed by a seven piece band who are on stage with the actors. Christopher Bannow (Curly) plays the guitar for most of his songs, as well. All the songs are from the original score, but they sound different, especially the final number after the wedding scene/tragedy. The title song is not as jubilant as what we’re used to. Marina and I agreed, we liked the show, but not the ending. It’s a reimagined work, telling a more realistic story of America’s violent past, with a wonderfully diverse cast. Some scenes are disturbing. Others are still humorous. Overall, it’s entertaining and thoughtful. After reading other reviews, I wanted to see this adaptation of Rodgers & Hammerstein’s 1943 musical, and I’m glad I did.

You can see Oklahoma! at the Orpheum Theatre in Minneapolis through Nov. 14, 2021, then it will tour in other cities. This 2019 adaptation won the Tony Award for Best Musical Revival, and a Tony Award for Ali Stoker who played Ado Annie on Broadway (not in the touring cast).

This musical revival played on Broadway in a much smaller venue as theater in the round. Minnesota theater reviewer, Jill, saw it there and can give you a comparison of the performance in the much larger Orpheum theater on her blog Cherry and Spoon.

This production of Oklahoma! is recommended for children ages 12 and up and contains fog, loud gunshot effects, moments of total darkness and violence. Proof of vaccination for Covid-19, or a negative test in the past 72 hours, are required to attend, and masks must be worn throughout the performance.

Journaling Prompt: Have you seen this musical? What do you think about its themes? 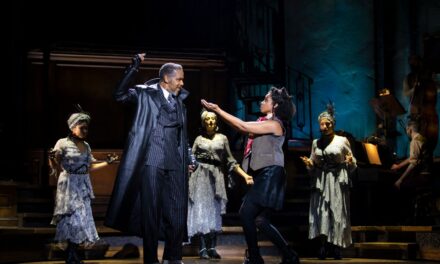 Review of Hadestown, National Tour, at Orpheum in Minneapolis