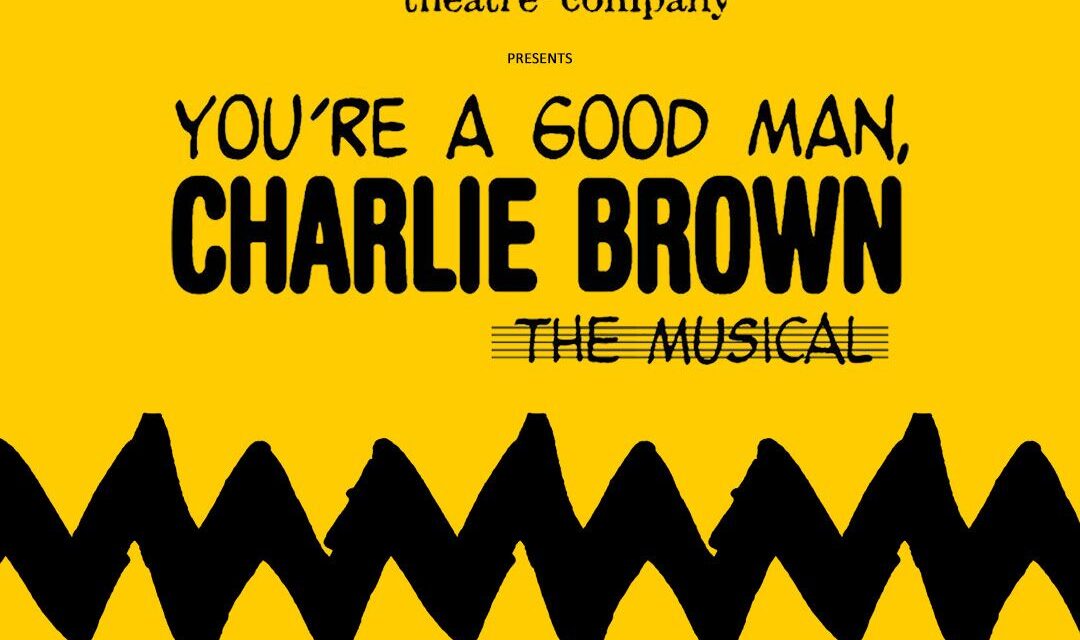 Quote of the Day: Happiness is anything and anyone at all that’s loved by you. Lyrics from the Happiness song in You’re a Good Man, Charlie Brown. Based on the characters created by Minnesotan Charles M. Schulz in his comic strip Peanuts. The musical premiered off-Broadway on March 7, 1967, featuring Gary Brughoff as Charlie Brown. I remember watching it when I was in elementary school when the older kids performed it, live on stage, and watching the television version later. I fell in love with the music. I already had a fondness for the characters, of course, Snoopy being my favorite stuffed toy as a child. I got the songbook and played the music over and over again. 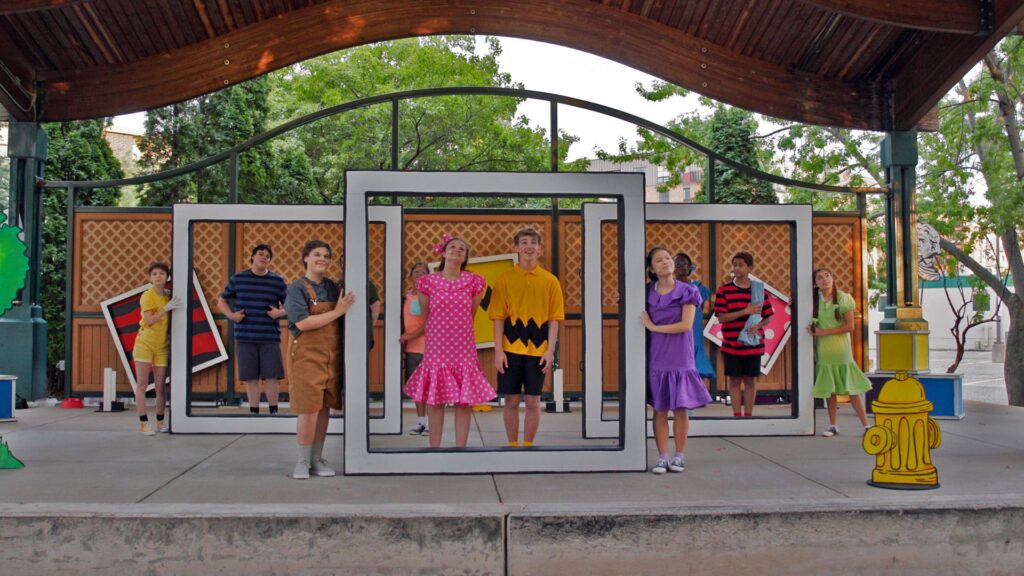 Stages Theatre Company in Hopkins is performing You’re a Good Man, Charlie Brown, directed by Sandy Boren-Barrett, in the Downtown Park in Hopkins, MN through August 8, 2021. They double-cast the show, allowing many young people a chance to perform. Families arrived with lawn chairs, blankets to sit on, blankies and stuffed animals to hug, and snacks to watch this 60 minute musical filled with witty lines, catchy tunes, and the characters we love. My theater companion said that he liked the Blankie song the best. I think he identifies with Linus. I adored Schroeder, then and now, and laughed the loudest at his Beethoven jokes and how he brushes Lucy’s flirtations aside to focus on his music. 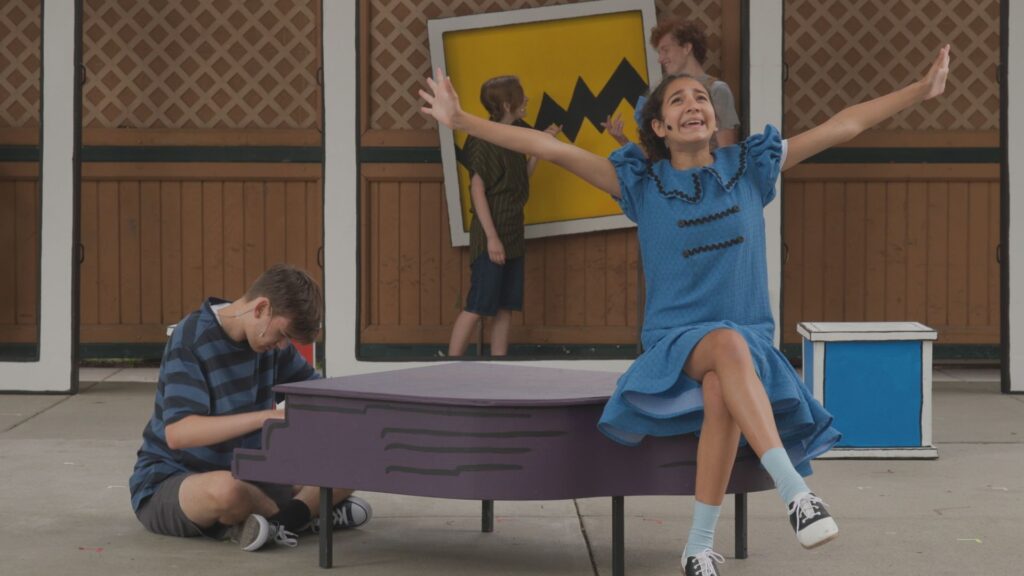 The student actors all do a great job of bringing these beloved characters to life. The set (Jim Hibbeler) looks like the cartoon strip come to life, with movable frames, Lucy’s “Doctor is In” booth, and of course, Snoopy’s doghouse. The costumes (Christa Ludwig) are darling with bright colors, bows, polka dots, and Charlie Brown’s signature jagged stripe on a yellow t-shirt. The choreography (Laura Mahler) was great and the actors performed with energy. Youngsters seated below the stage wiggled and danced along at the end of the performance. They have a paved area in front of the stage where you can set your lawn chairs or a blanket, or sit on one of the few permanent benches. You can also spread out a blanket on the little hills to get a good view of the stage.

If you’re looking for a fun family activity to do this summer, grab a blankie and head to the park in Hopkins. Tap your toe, or sing along, to your favorite Charlie Brown songs as you enjoy live theater again. We had the perfect day. Go to Stages Theatre website for showtimes and ticket information. 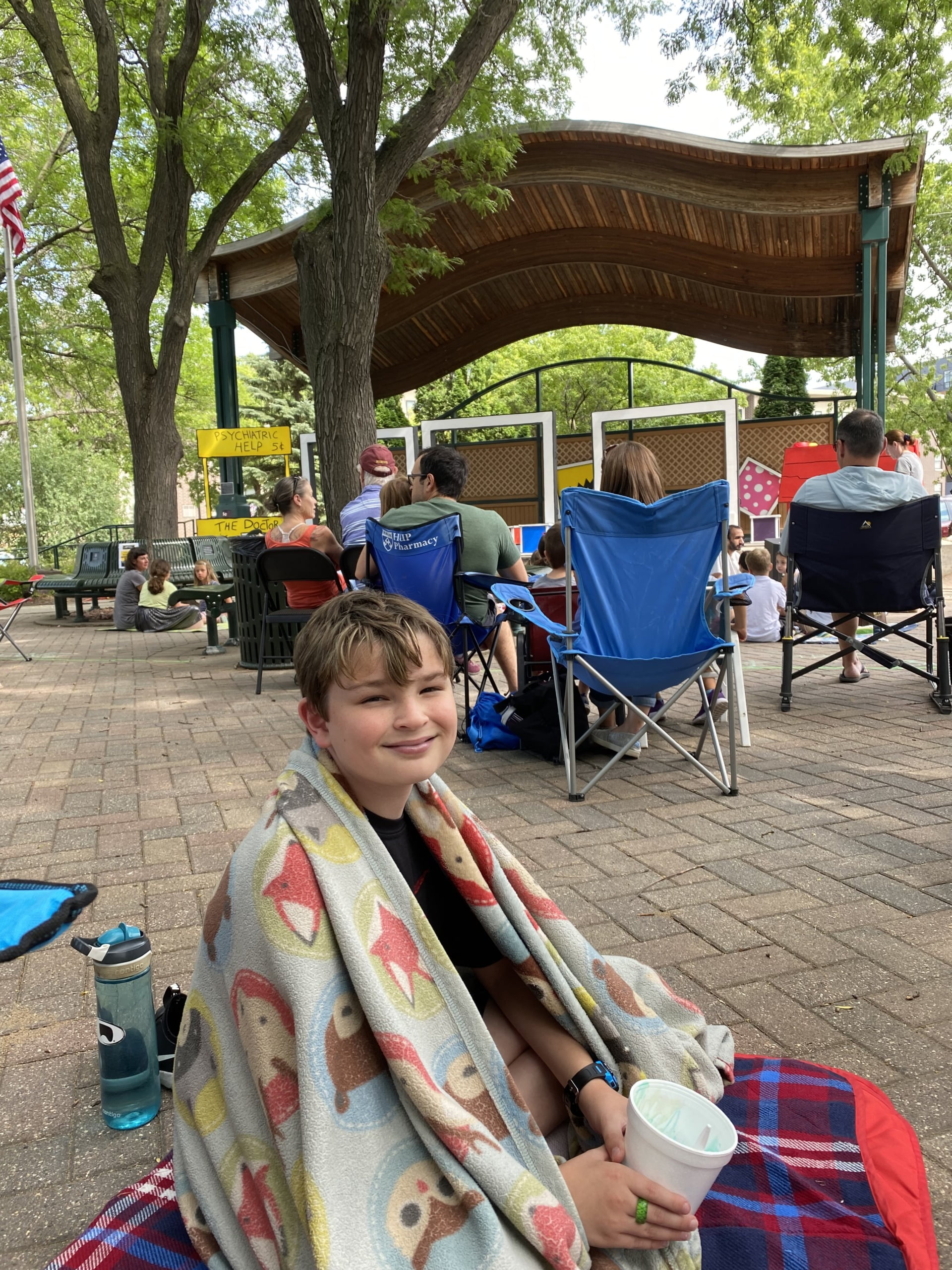 My Blankie and Me!

Journaling Prompt: Who is your favorite character from the Peanuts gang? Or, do you have other favorites from childhood? 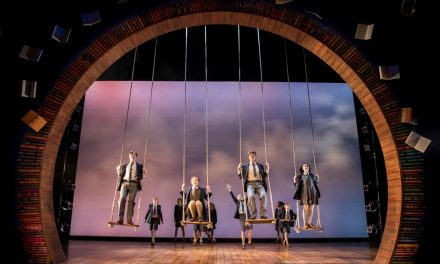 Review of Matilda, the Musical at Children’s Theatre in Minneapolis 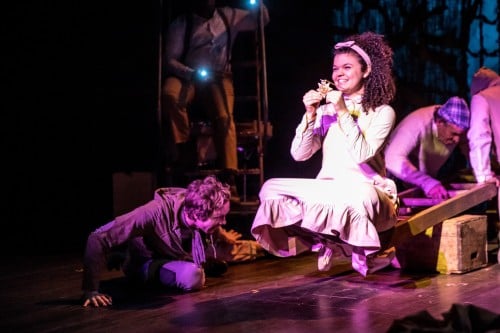