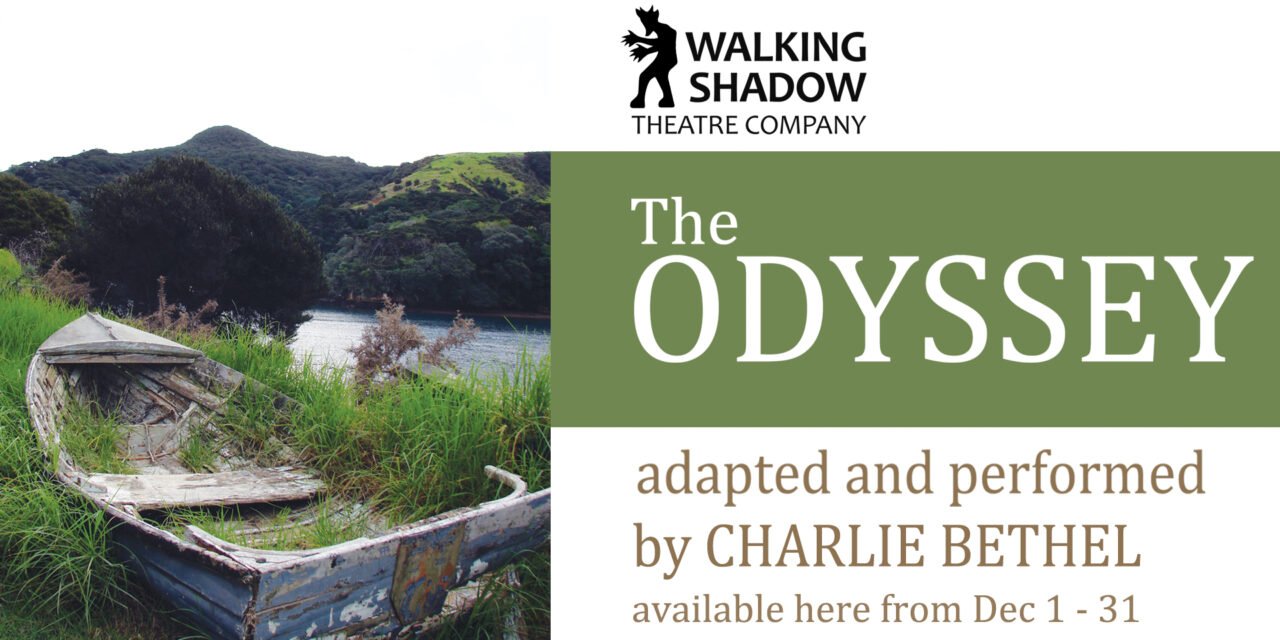 Quote of the Day: Sing in me, Muse, and through me tell the story of that man skilled in all ways contending, the wanderer, harried for years on end. Homer, The Odyssey 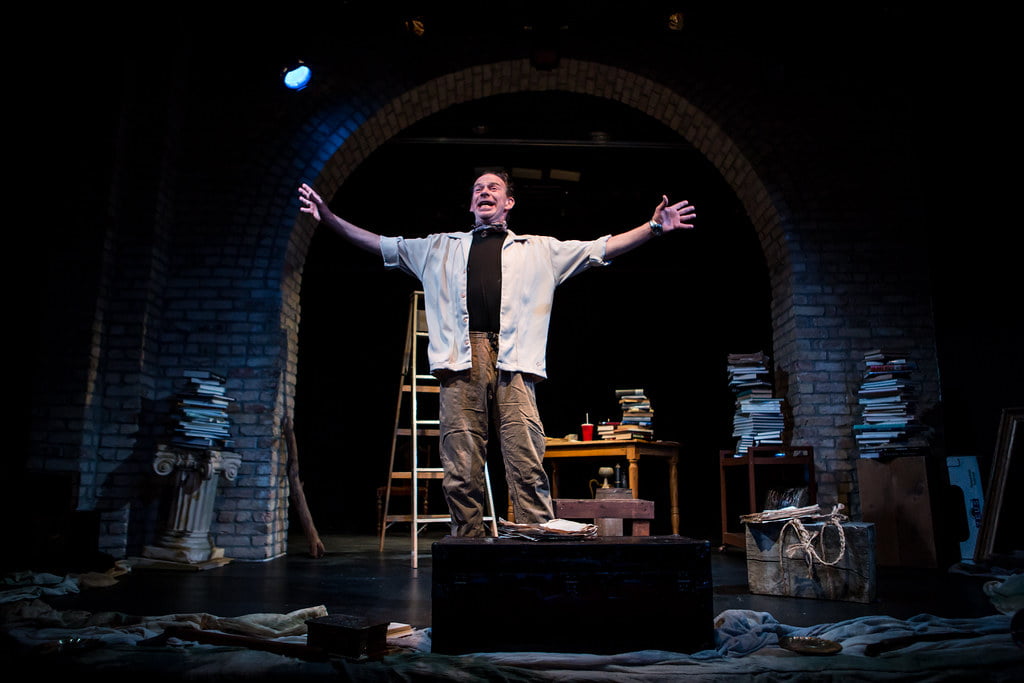 Charlie Bethel, telling the tale of The Odyssey. Promo photos for Charlie Bethel and Walking Shadow from their 2014 production.

The Walking Shadow Theater company is providing The Odyssey, streaming, through Dec. 31, 2020, with a watch party scheduled for Friday, Dec. 18. When they reached out to me to watch and review this recorded performance by Charlie Bethel, I said, “Sure.” I’ve always enjoyed the Greek myths. It’s an epic tale, a hero’s journey, and has been remade in many forms through the years. I thought I’d wrap gifts while watching/listening. Well, I only wrapped two gifts because I was so riveted to Mr. Bethel’s powerful telling of this adventurous tale. He is so engaging, even through the screen (which I attached to my TV, so it would be bigger), that I couldn’t tear my eyes away. It was like your favorite teacher, who really gets into his subject, is sharing his favorite story with you with unbridled enthusiasm, using only a ladder and a chair for props, and his amazing voice, body, and facial expression. I could picture the sea, the ships, the foolish sailors, the evil Cyclops, and the selfish Nausicaa who finds Odysseus when he washes ashore on her island and tries to keep him there forever. I cringed a little towards the end when Odysseus takes his revenge on the suitors, and I listened intently as Penelope discovers that he really is her long, lost husband. When Mr. Bethel gets to the end of the tale, the emotional reaction is strong and clear. I wish I had watched this back when I was reading The Odyssey in college. I would have remembered nearly everything.

I’ll share the press release from Walking Shadow, including links on how to watch.

Walking Shadow presents The Odyssey, The Legend of Sleepy Hollow, 21 Extremely Bad Breakups, and Gilgamesh, one show per month starting right now! Each show will have on-demand availability, plus a watch party.

Walking Shadow produced The Odyssey in 2014, but that run was cut short due to performer illness, and we were never able to film it. We are partnering with the Charlie Bethel Legacy Project, who found this video that Charlie created himself using multiple cameras.

The Charlie Bethel Legacy Project also generously offered to partner with us to present Charlie’s similar video of Gilgamesh, content new to Walking Shadow. The CBLP will use their proceeds from these videos for grants to support the next generation of artists developing and performing their own epic solo shows.

The other two productions are live, multiple-camera recordings of Walking Shadow’s own shows.

The Odyssey
adapted and performed by Charlie Bethel
streaming on demand through December 31
Watch Party: Friday, Dec 18 at 7:30pm

Walking Shadow presented The Odyssey in 2014. This is a video created by Charlie, presented in partnership with the Charlie Bethel Legacy Project.

The Legend of Sleepy Hollow
Written by John Heimbuch from the story by Washington Irving
Directed by Jon Ferguson
Streaming on demand in January, limited dates TBD
(We are working with the licensing agent to see how many dates we can stream this!)
Watch Party: Friday, Jan 8 at 7:30pm

In the quaint village of Sleepy Hollow, stories of wonder and strangeness surround the legend of a mighty headless Hessian. When the humble schoolteacher Ichabod Crane vies for the hand of the beautiful Katrina Van Tassel, the townsfolk might protest but it is ultimately the Horseman who will decide his fate.

This is a video of Walking Shadow’s 2013 production.

21 Extremely Bad Breakups
Adapted and directed by Amy Rummenie
Based on the book by Mark Leidner
Streaming February 1 – 28
Watch Party: Friday, Feb 12 at at 7:30pm

Imagine the worst breakup ever. No: even worse than that. Revel in the absurd fears, tender hopes, and unrealized fantasies that make us act like idiots. This charming new show about love and its many catastrophes is probably appropriate for a date. Or not. It depends on the date.

This is a video of Walking Shadow’s 2018 production.

The ancient Sumerian epic about the adventures of King Gilgamesh. Including his friendship with a hairy wildman, the battle with the Bull of Heaven, the Tale of the Great Flood, and a quest for immortality!

About Walking Shadow Theatre Company:
Since 2004, Walking Shadow Theatre has created well-staged and carefully-researched independent theater. Walking Shadow has won two Ivey Awards for Overall Excellence for its productions of Gabriel and Compleat Female Stage Beauty. Other popular productions include Open, Red Velvet, A Midwinter Night’s Revel, The Coward, The Whale, our original adaptation of The Three Musketeers at the Guthrie Theater, Gross Indecency: The Three Trials of Oscar Wilde, Jon Ferguson and John Heimbuch’s The Legend of Sleepy Hollow, The Transdimensional Couriers Union by John Heimbuch, and the immersive play-with-puzzles Cabal by David Pisa & John Heimbuch.