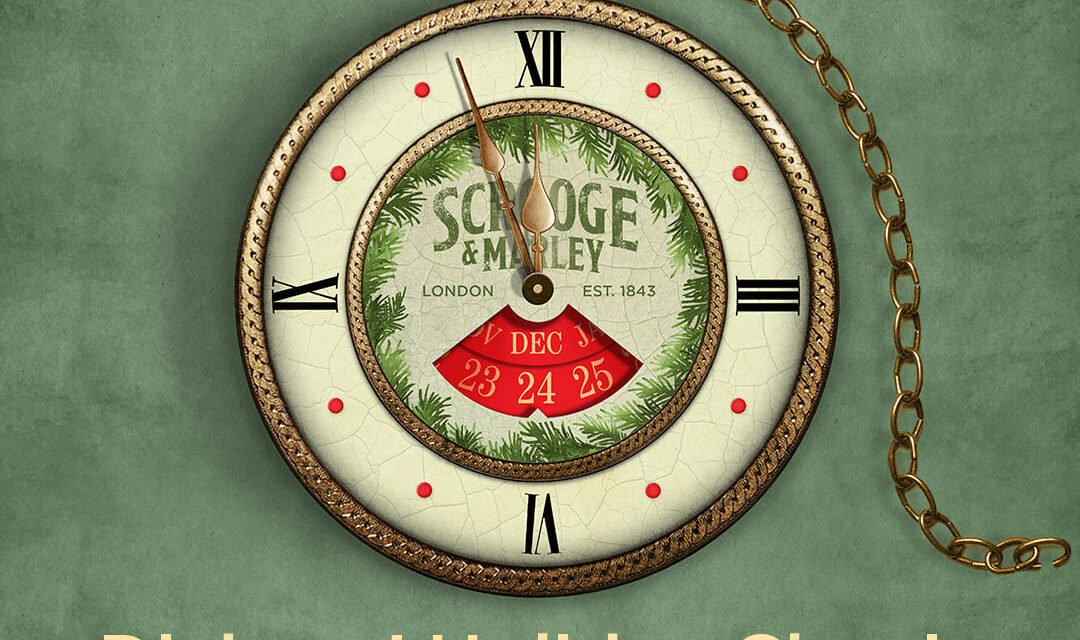 Quote of the Day: I will honor Christmas in my heart, and try to keep it all the year. I will live in the Past, the Present, and the Future. The Spirits of all Three shall strive within me. I will not shut out the lessons that they teach. Charles Dickens

Even in a Bah Humbug kind of year, Christmas can be saved with a few traditions, somewhat modified for health and safety during a global pandemic. My boys and I have been experiencing a theater outing as part of our holiday traditions for several years now. It started with a trip to the Guthrie Theater in 2011 to view and review A Christmas Carol. I bought the extra tickets so all four of my boys could see this production as a holiday gift to us. It was the second show that I’d been invited to review, so we were still finding our way there, wondering where to eat, how to dress, what to expect. A few years later, one of my sons said, “A Christmas Carol is by far the best show you’ve ever brought us to, Mom.” Be still my heart. Over the years, I’ve built traditions around holiday shows, inviting friends and family, and it’s been hard not to have those special outings. Offerings, like this streaming of the Guthrie’s A Christmas Carol, made the traditions possible, from the comfort and safety of our home. 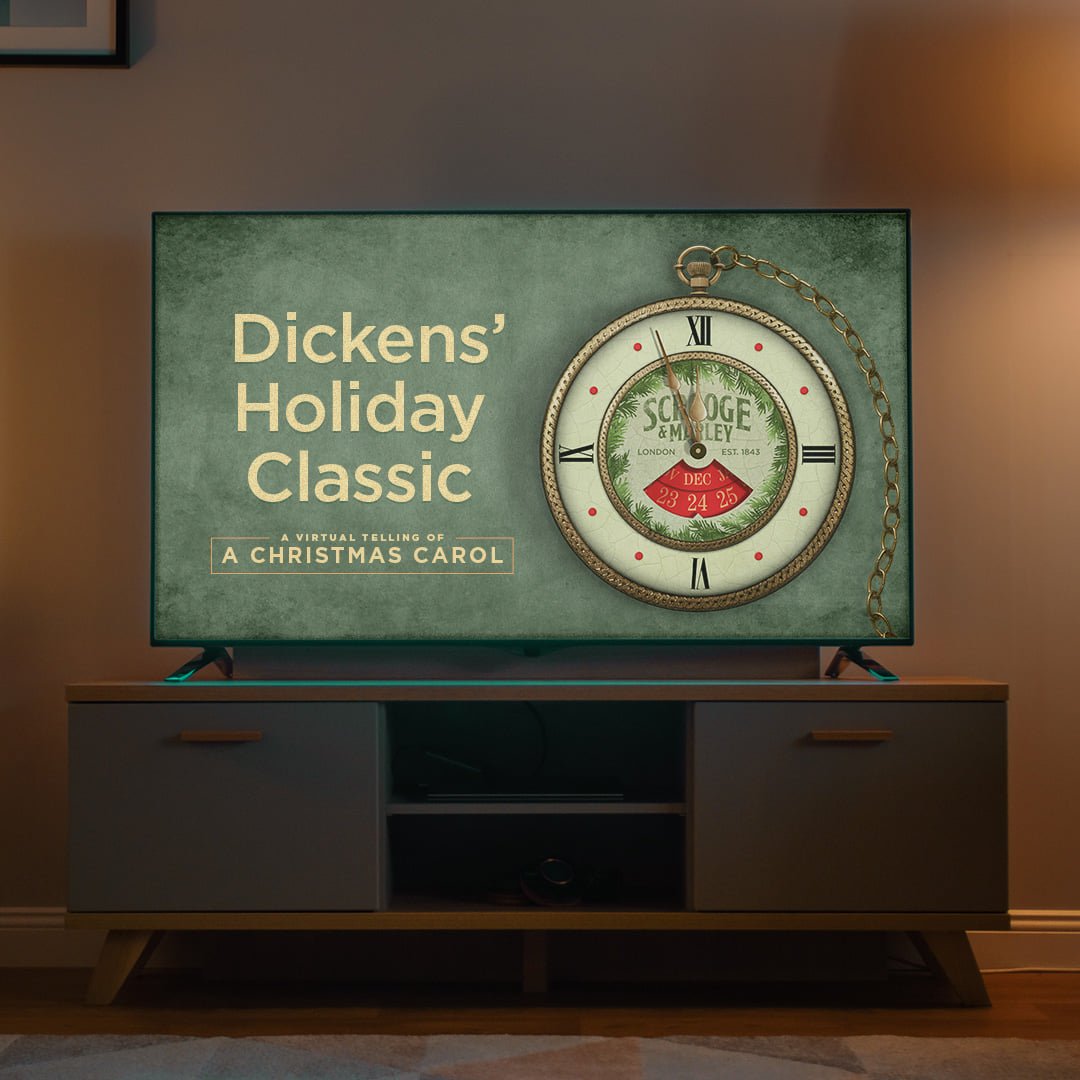 Today, we’re experiencing a blizzard on top of other isolations and cancelations. But, a blizzard we can handle. It eventually stops. Roads are cleared. And, we’re able to get to our loved ones, just a bit delayed. The pandemic is less predictable, and much longer, but we’re coping. We’re meeting in other ways, and experiencing shows together, but separately. I watched A Christmas Carol with my friend and her daughter. Other years, we usually had a holiday theater date, and I was sad to miss it, but the streaming offering saved the day. I plan to watch it again with my boys when the snow stops and they’re able to get here.

We’ve learned to improvise during this pandemic, something that theater folks are expert at. In fact, the Guthrie’s streaming version of A Christmas Carol is delightful. They use some of their gorgeous set, which is so fun to see. Four of the finest Twin Cities actors tell the story, each taking one of the Staves, bringing life to the various characters and story. We loved watching them perform. It’s an amazing marriage of stage and film. It felt like we were watching the show from the edge of the stage, or even next to the actors, some elements were so closely filmed. Yet, it was on a screen. They had good use of sound effects, costumes, lighting, all the elements that give you the sense of being there. Dickens, himself, used to go around from stage to stage, in cities around the world, to share his beloved tale. (Read their digital program for a full list of all the people involved in producing this show.)

Here’s the full press release from The Guthrie Theater:

(Minneapolis/St. Paul) — The Guthrie Theater (Joseph Haj, Artistic Director) today announced it will present Dickens’ Holiday Classic, a virtual telling of A Christmas Carol inspired by Charles Dickens’ festive public readings of his cherished novella. Adapted and directed for the stage by Joseph Haj with film direction by E.G. Bailey, this special event will feature Twin Cities actors Ryan Colbert, Nathaniel Fuller, Charity Jones and Meghan Kreidler. Dickens’ Holiday Classic will be available to stream on demand December 19–31, 2020. Tickets are $10 per household and will go on sale Tuesday, October 6 at 11 a.m. through the Box Office at 612.377.2224 and online at guthrietheater.org.

One of Dickens’ favorite ways to spread holiday cheer was to perform dramatic readings of his beloved ghost story for audiences near and far. With a trusty, self-edited copy of his novella in hand, Dickens took Scrooge’s tale of transformation on the road for decades, standing at podiums and entertaining large crowds of devoted fans from London to Boston and beyond.

Drawing inspiration from this centuries-old tradition, the Guthrie’s special virtual event features four actors who will each deliver one of Dickens’ hand-curated chapters and reimagine the classic for a global audience to enjoy. During the season that would have brought the 46th consecutive production of A Christmas Carol to the Guthrie stage, the theater is continuing its holiday tradition virtually with the hope of making spirits bright while its stages are dark.

More than 10,000 students attend the Guthrie’s production of A Christmas Carol annually, often at deeply reduced ticket prices, making it one of the most popular and accessible first-time theater experiences for youth in the region. As part of the Guthrie’s ongoing commitment to introducing youth to the art form and engaging them in the power of storytelling onstage, the theater will make Dickens’ Holiday Classic free to all K–12 schools beginning December 15. Educators and administrators are invited to register here for free access or email groups@guthrietheater.org for more information. Although the story is appropriate for all ages, this virtual event is most appropriate for middle and high school students.

Dickens’ Holiday Classic will be prerecorded and streamed on demand.

“I love the tradition of A Christmas Carol at the Guthrie,” Haj recently shared. “Dickens’ story represents everything we talk about in the theater: the ability to create community and the opportunity to be made better through the art form that we love. As a young actor at the Guthrie in the 1990s, I remember the first time I saw A Christmas Carol onstage. I was able to witness firsthand how much the play meant to our community, and I was powerfully moved by the production.”

He added, “Since theaters were forced to shut down in March due to health and safety concerns, there have been many losses and hardships, but it felt unimaginable to not uphold this beloved holiday tradition in what would have been its 46th consecutive year at the Guthrie. Though we can’t gather in person, we felt it was important to find a way to bring A Christmas Carol to our community when we perhaps need it most. We took the lead from Dickens himself, who adapted his novella into four staves, or chapters, which he performed in wildly popular public readings for more than 20 years. It gives me great joy to bring this timeless classic to life, using Dickens’ own performance script, with four incredible actors in an intimate, virtual medium.”

For more information on how to watch this production, go to The Guthrie Theater.