Not everything about the global pandemic is a complete disaster. For the first time EVER, I’m watching the MN Fringe Festival, not live and in person the way I would prefer, but virtually, and in real time, for the most part. Theaters are dark, but the action is alive and well. All the shows are streaming, some live, some free, called the Nightly Shows, and some are recorded for later viewing, The Digital Hub. A person could potentially see almost all of them. Please visit the MN Fringe Fest website for more details. (Header photo by MN Fringe Fest)

Last night, July 30, I watched two Fringe shows, Break the Dice by The Bearded Company, and Txtshow by Brian Feldman. I have to give Brian a shout out for inviting me to watch his show. It was the impetus I needed to officially sign up (buy a button for a mere $5) and commit to watching some Fringe this year. 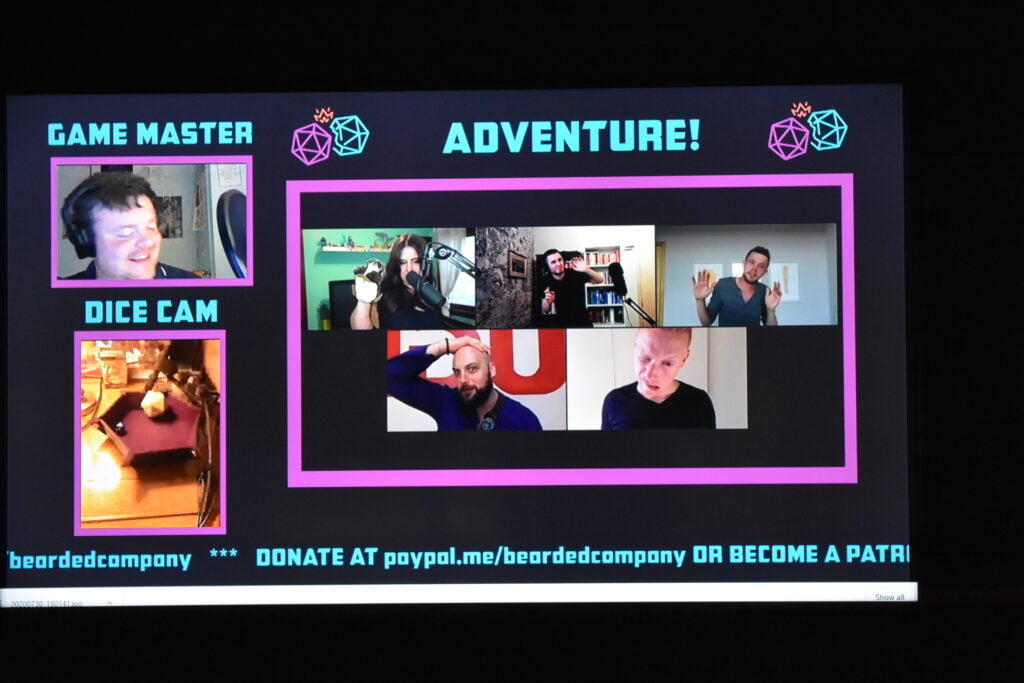 Break the Dice was a great first dip into the world of Fringe. The Bearded Company, Tyler Michaels-King, etc, is a well established improv troupe in the Twin Cities. During non-Covid times, they perform at HUGE Theater (I will be there when the doors open again) and in Los Angeles. Using Twitch, they did a Dungeons and Dragons type show with a Moderator, a 20-sided die, and five actors. Last night, we saw a couple of adventurous squirrels (and a brief video bomb by a cat), a silly song, and three knights in not-so-shiny armor. The audience was asked to submit magical elements as the show was warming up. Then, we sat back and enjoyed their antics. Lots of great movement and humor, exaggeration, and role playing. The actors are so good, they seemed to act out as the moderator told them what their role of the die involved. Entertaining. You could watch them every time they perform and get a new experience, and be highly entertained. Recommended to anyone who likes role playing and improv. A little colorful language, still, family friendly. If you missed it, you can find the link on their FB page, or check out their podcast. 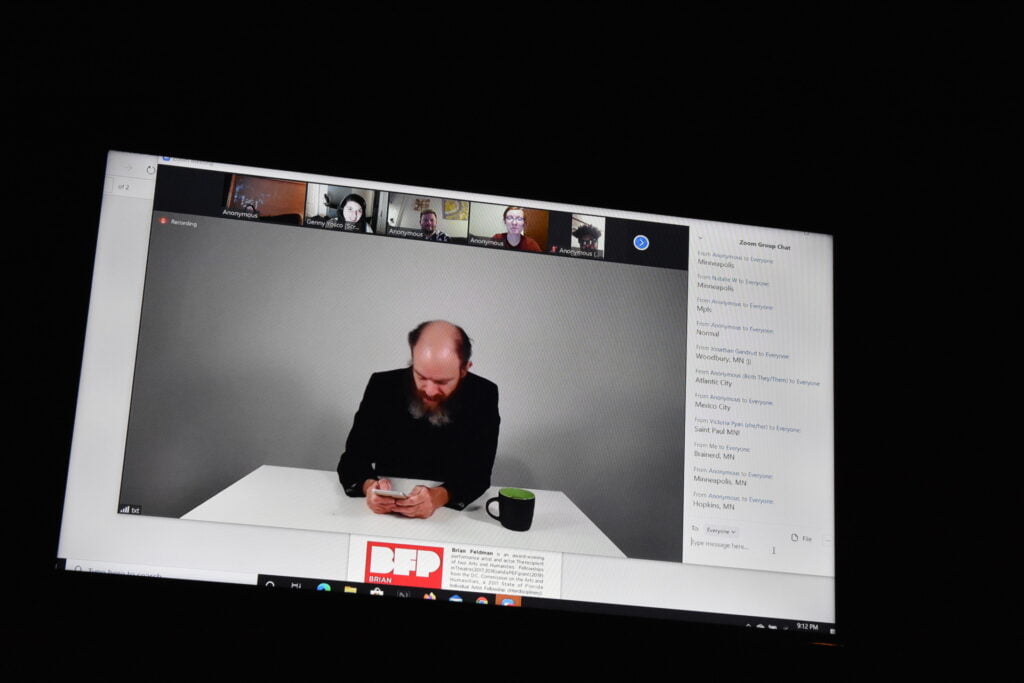 Brian Feldman’s show TxtShow is completely interactive, and it’s more fun if you participate. His show is whatever the viewers type in his chat message, using Zoom. A moderator gave us a brief message before it started, and I think she helped get the story going. As people sent him words, lines, etc, he said them. Not just in a robot voice, but with inflection, like they were his own and he was telling us a bizarre story about Bees and a Honey Festival, with the introduction of bears and dinosaurs. When there was a pause (no one was sending in words for his script), we heard a noise that sounded like a space ship. I thought, sounds like an alien landing, and someone else wrote in “Aliens have landed.” That’s when I got more interested and typed in a few words of my own. 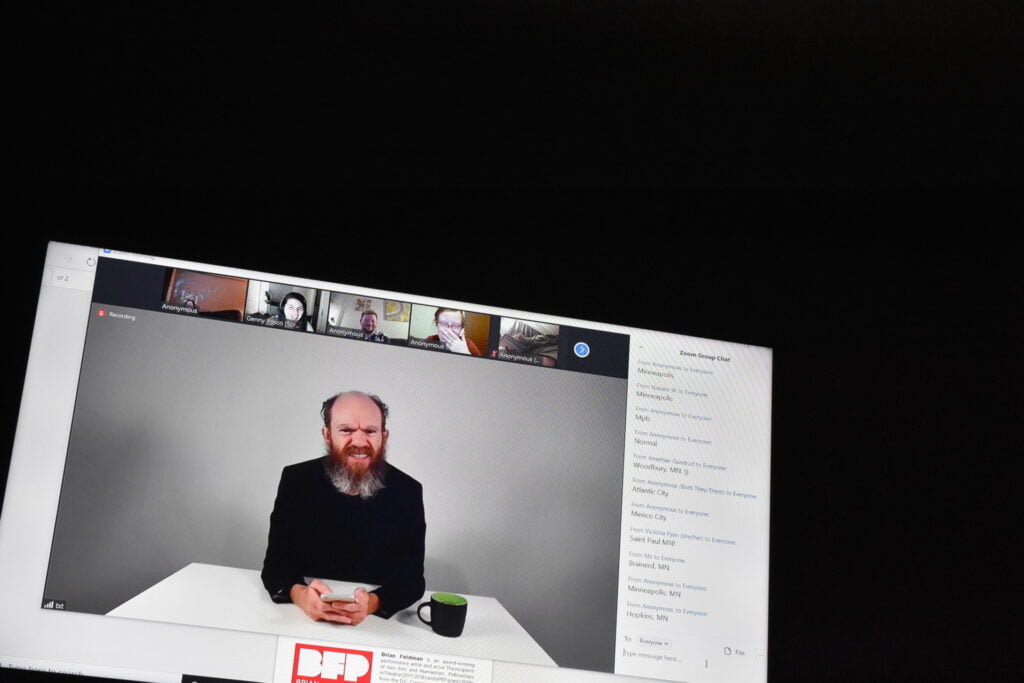 Txtshow is a great show for people who like to contribute to a story (you don’t have to, but it’s more fun if you d0), and want to see where it might go. Brian does a great job of making it fun and engaging. He had us singing along at one point, which is a little weird using Zoom because of sound delays. We mostly sounded like a drunk choir at a campfire, with bees buzzing around us, and aliens landing and wanting all our dogs. Who knows where the next story will go? Again, you could watch his show every time and get a different experience. It’s typically family friendly with a warning that sometimes people can get a little more “mature” in their writing. Check out more from Brian Feldman! 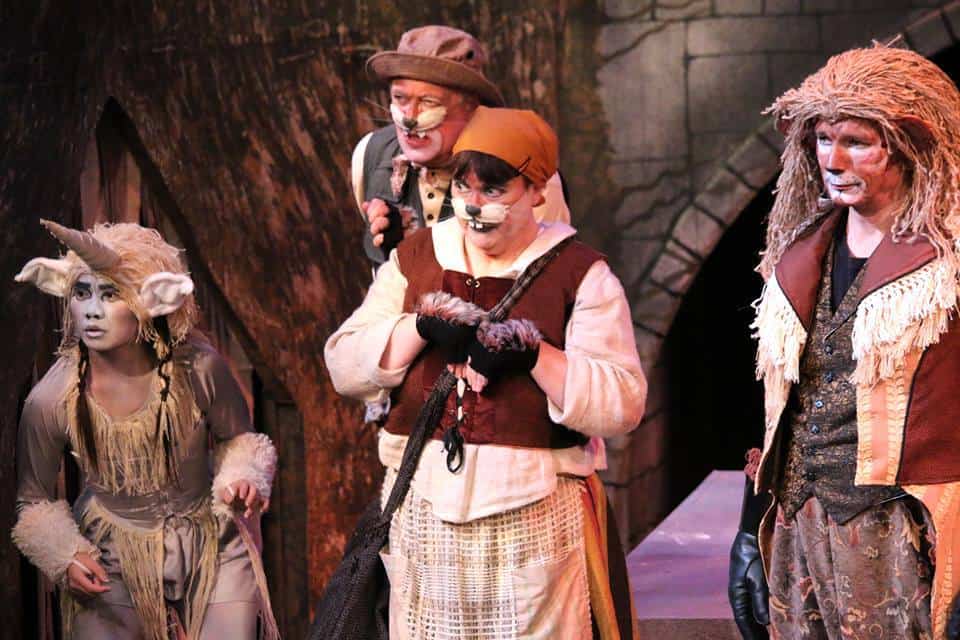 Review of The Lion, The Witch, and The Wardrobe at Open Window Theatre