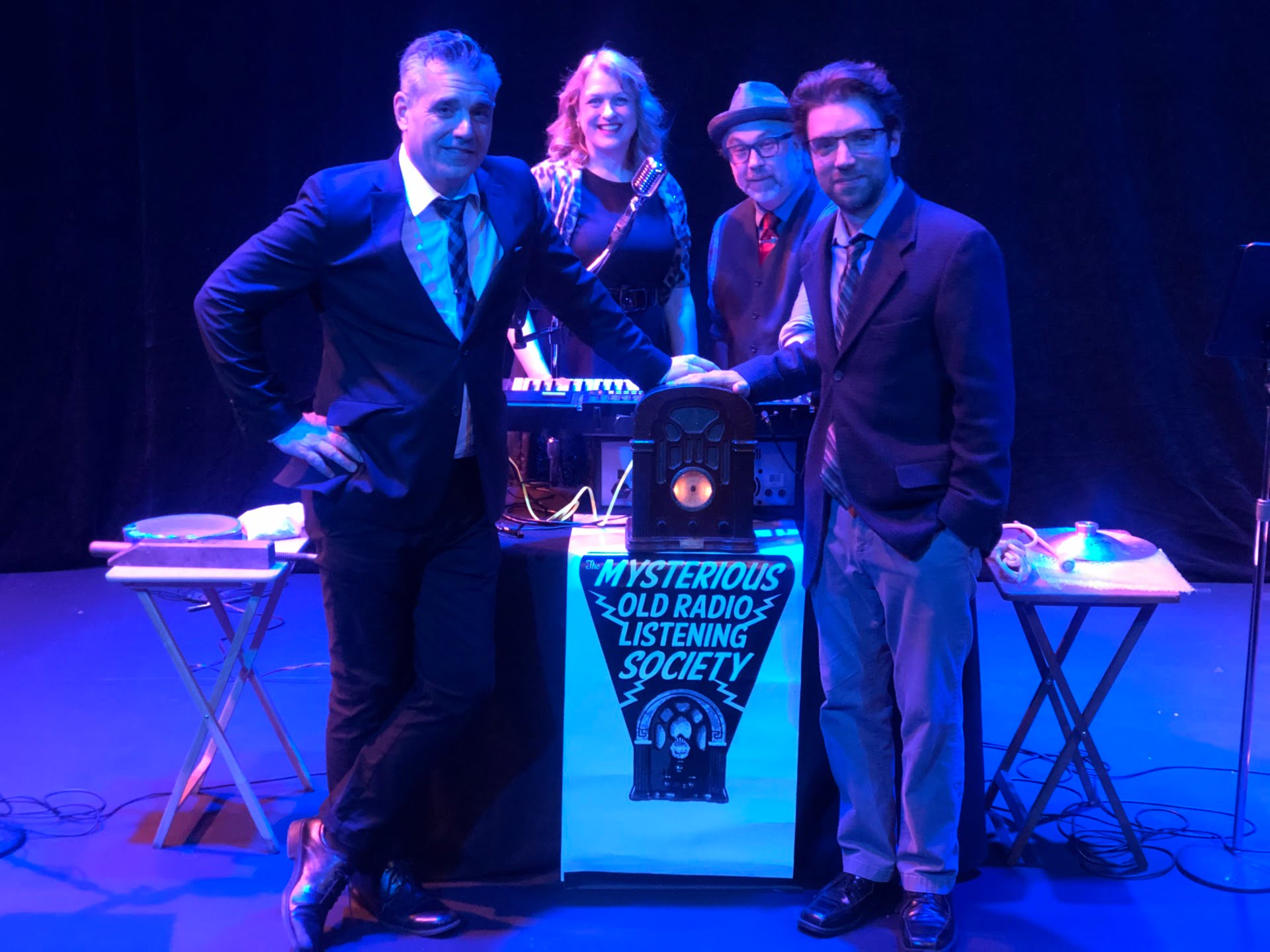 Quote of the Day: In “Changeling” I tried to show something that you’d never see nowadays – a kid sitting and looking at the radio. Just sitting in front of the radio and listening. Your mind does the rest.

We used my laptop hooked up to the big screen television, and Park Square provided photos of the actors who originally played the parts, and ads. Still, it was a similar experience for us while listening to the broadcast (zoom meeting) of The Mysterious Old Radio Listening Society on Tuesday night, 4/20/20. Park Square is the host, and they’ve been performing these shows live the past few months. Since we’re in the Covid-19 Quarantine here in Minnesota, they needed to find a new way to share their old time radio productions. While it would have been fun to watch them perform it live onstage, acting out the parts, showing us how they transformed from one character to the next, and what they used for sound effects, listening without much visual, set the imagination on fire.

I listened with my college boy, who is forced to live with his old mom while the University is closed down. He was playing a video game, but engaged. We talked about the show as it was playing. I would have taken up my knitting if I hadn’t just completed a pocket scarf that I’d been working all winter. Quarantine has given me time to complete it. By the time they do the next one, on May 11, I’ll have started a new project. I felt connected to my past, my ancestors, who sat around the radio, knitting, darning socks, cleaning things, eating, maybe even quietly visiting, or commenting on the show, like we did. And, the best part was when the show was over, my boy said, “That was fun.”

Eric Webster, who hosted the evening and performed, said that he tried to get the sound to be more like it was in the prime time of radio, where you heard that crackle and snap along with the dramatic dialogue and atmospheric music. “I wanted it to have the right amount of hiss,” he said in the post-show discussion. Yes, there was a post-show discussion. Participants, on Zoom, could write in comments and questions. Brave souls who weren’t in their jammies already (I may, or may not, have been watching in my jammies), turned on their video AND audio. (I kept both off.) One audience member showed us the old radio he had on a shelf (“Still works,” he said) and talked about the experience of watching/listening to the two episodes last night. It evoked memories of childhood. I feel like it gave us a glimpse of the past.

The shows we listened to last night were “The Interruption” from the anthology series Mystery in the Air. Based on the 1925 story by W.W. Jacobs (author of “The Monkey’s Paw”), this twisty tale of murder and blackmail starred Peter Lorre and Agnes Moorhead. And, “The Case of the Goofy Groom” from The Adventures of the Thin Man, featuring Dashiell Hammett’s famous detective duo Nick and Nora Charles.

Society members played the parts (see featured image above by Ben Thietje): Eric Webster, Shannon Custer, Joshua English Scrimshaw, and Tim Uren. They were all fantastic. Joshua is a huge fan of Peter Lorre, and did his parts wonderfully, not trying to imitate the famous actor of the 40’s and 50’s radio and screen, but certainly captured his essence. Shannon Custer did all the female parts. If I hadn’t know that going in, I would have been shocked to learn it at the end of the performance. She made each character so distinct. I especially appreciated her characterization of the three women in “The Case of the Goofy Groom.”

Now, I have a hankering to listen to some old time radio shows while I’m out on my solitary walks. I love imagining how they did the sound effects. I admire the voice work that they do, and a gripping mystery really gets my imagination going, and my legs moving a little faster. (What was that noise? Is it following me?) Luckily, I have my college boy here to check out unusual noises in the house!

I’m looking forward to the next installment of “The Mysterious Old Radio Listening Society” on May 11, 2020. It will be offered online. For more information and tickets, please visit Park Square Theater. You can also listen to their podcast at Ghoulish Delights. Until then…

Journaling Prompt: Do you have any old-time radios in your family/home? What do you like to listen to while driving or walking or doing mundane chores?

Review of Wait Until Dark at AAAA