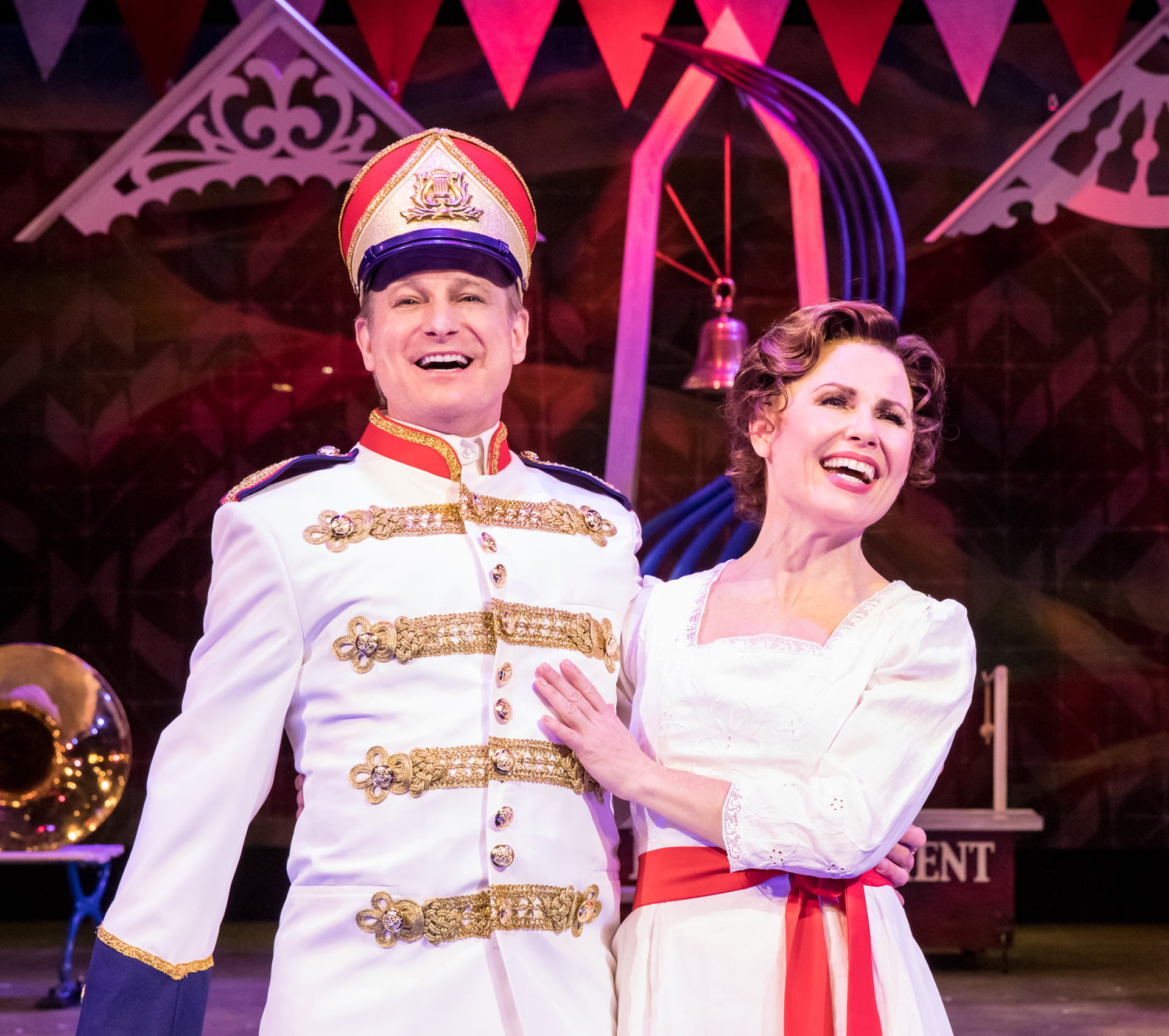 Quote of the Day: I always believe there’s a band. Professor Harold Hill in The Music Man. He might be selling a load of goods, but what he’s truly giving is hope and community.

I have always loved The Music Man. Some of my favorite songs come from Meredith Willson’s endearing musical. I mean, who can sit still with a sour face while listening to “76 Trombones” and watching all those charming characters kick up their heels? I know I can’t. In fact, I know this show so well, I had to force myself to only mouth the words while mentally singing along. This is truly a show about community. Yes, the townsfolk are suspicious of outsiders. They’re critical of a strong, independent young woman. They’re quickly influenced by a smooth-talking salesman, then turn on him just as fast when someone calls his bluff. I don’t see how anything has changed in 100 years (from the time of it’s setting) or in the past 60 odd years since it debuted on Broadway. I still chuckle at the goofy colloquialisms, the easily identified characters, the ridiculous community gatherings, Harold Hill’s “Think system” of learning an instrument, the darling children, and the Barber Shop Quartet that unites the quarreling school board members. (The Quartet’s voices blend together beautifully: John-Michael Zuerlein, Shad Olsen, Aleks Knezevich, and Evan Tyler Wilson.) 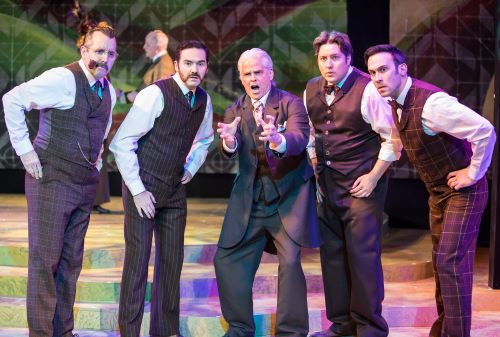 This is one classic musical that has lasting power. People still use the songs for solos, ensembles, and audition pieces, and who hasn’t seen a community theater production? Some of the songs are: Ya Got Trouble, Wells Fargo Wagon, Goodnight, My Someone, ‘Till There Was You, and one that’s not in the 1962 musical starring Robert Preston and Shirley Jones “My White Night” (which I love, and Ann Michels as Marian sings it eloquently). My favorite scene/song from the musical takes place in the library with Marian the Librarian. I love all that stamping, book slamming, and shushing, the facial expressions, tight choreography, and fun. I’ve seen the show a dozen times, at least, and I still worry about Professor Hill dropping that bag of marbles! 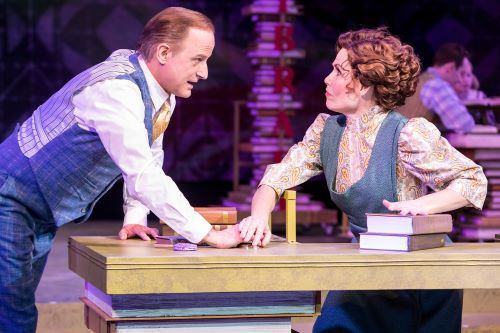 Michael Gruber as Professor Harold Hill and Ann Michels as Marian the librarian in The Music Man at the Chanhassen Dinner Theatres. Photo by Dan Norman, 2020

Set designer Nayna Ramey did a marvelous job of designing easily movable set pieces that are representational and functional. Back to the scene in the library: The kids wheel in the set pieces that look like piles of books that they use as chairs and tables, scooters, and dancing partners! It’s delightful. In fact, all the scene changes are wonderfully streamlined and seem to be built into the choreography.

Speaking of the choreography, Tamara Kangas Erickson once again does a marvelous job of telling the story through movement. Harold Hill (Michael Gruber) and Marcellus Washburn (Tony Vierling) have an exciting tap dance duet. The entire cast kicks up their heels for the big numbers. From the youngest actors (who are darling and almost steal the show) to the most experienced, they tell the story together as they move us through the dance of a community from suspicion to acceptance. Rich Hamson’s costume design are period appropriate and sometimes add a bit of whimsy. The women’s hats are spectacular! Hair & Makeup by Paul Bigot are excellent. Sue Ellen Berger (lighting) and Russ Haynes (sound) add color, depth, and focus to the performance. And, big applause to Andy Kust and the amazing band. The show would not exist without them. They are the “76 trombones,” the luscious melodies, glorious harmonies, and driving beat.

Cast of The Music Man at the Chanhassen Dinner Theatres. Photo by Dan Norman, 2020

Director Michael Brindisi has assembled a stellar cast, crew, and musicians. Their list of credits and accomplishments would fill pages. Like I said earlier, Ann Michels sings each song eloquently, using her gorgeous voice to hit every note perfectly and also emote the feelings behind the songs. (I still get teary at the end of Act I when Winthrop comes alive with confidence in receiving his instrument, and Marian sees the good in what Harold Hill is doing.) Michael Gruber is an excellent leading man. He, too, knows how to deliver a line, a look, or a musical phrase that is quite convincing. Keith Rice is charming as Mayor George Shinn, and Michelle Barber is hilarious as his wife Eulalie Mackecknie Shinn. Peggy O’Connell is a darling Mrs. Paroo, exhibiting the frustration and love she has for her children. 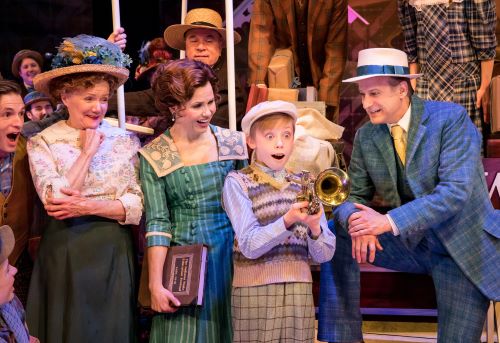 The Music Man enjoyed Broadway revivals in 1980, 2001, and, in October 2020 it will be revived once again starring Hugh Jackman and Sutton Foster. (I’d love to see that one! Anyone up for a road trip?)

Journaling Prompt: Describe your home town, or a place where you grew up. What are some special memories of the people and places you roamed as a youth? 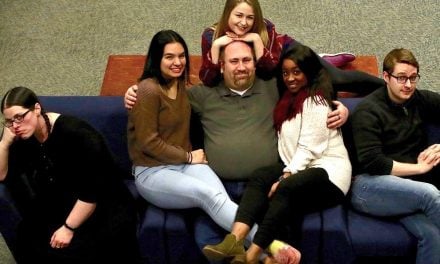 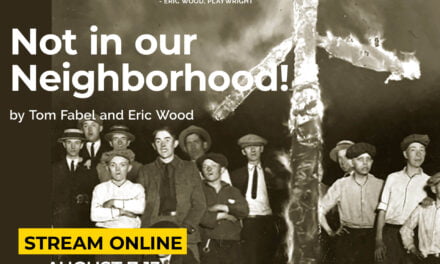