Review of The White Card at Penumbra Theatre 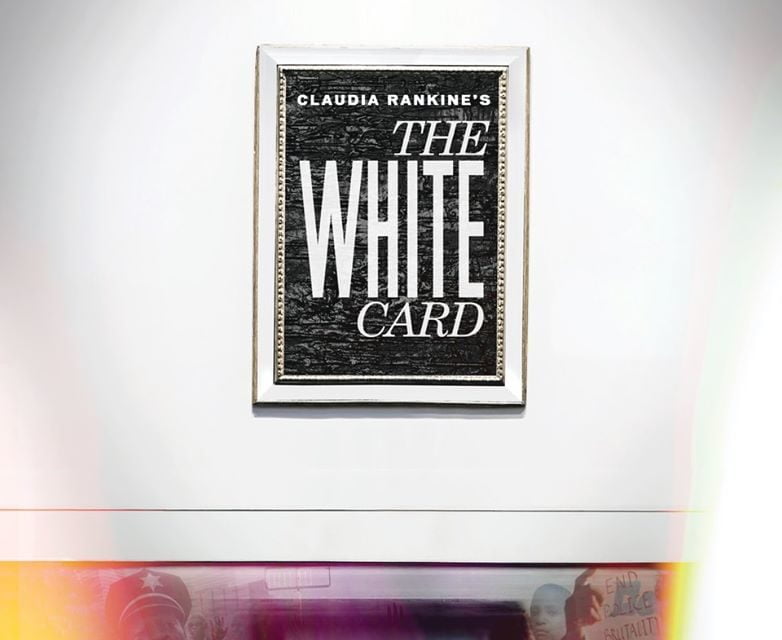 Quote of the Day: I attest to this: The world is not white: It never was white, Cannot be white. White is a metaphor for power… James Baldwin, from the Director’s Notes in the program for The White Card, directed by Talvin Wilks, written by Claudia Rankine, on stage at Penumbra Theatre in St. Paul, MN through March 1, 2020.

The theme of The White Card is race, racism, art, and perspective. Whose voices are we hearing? Under what filters to we hear, see, and experience art? On the way into the theater, I noticed a chalkboard with the question: What does Black art mean to you? 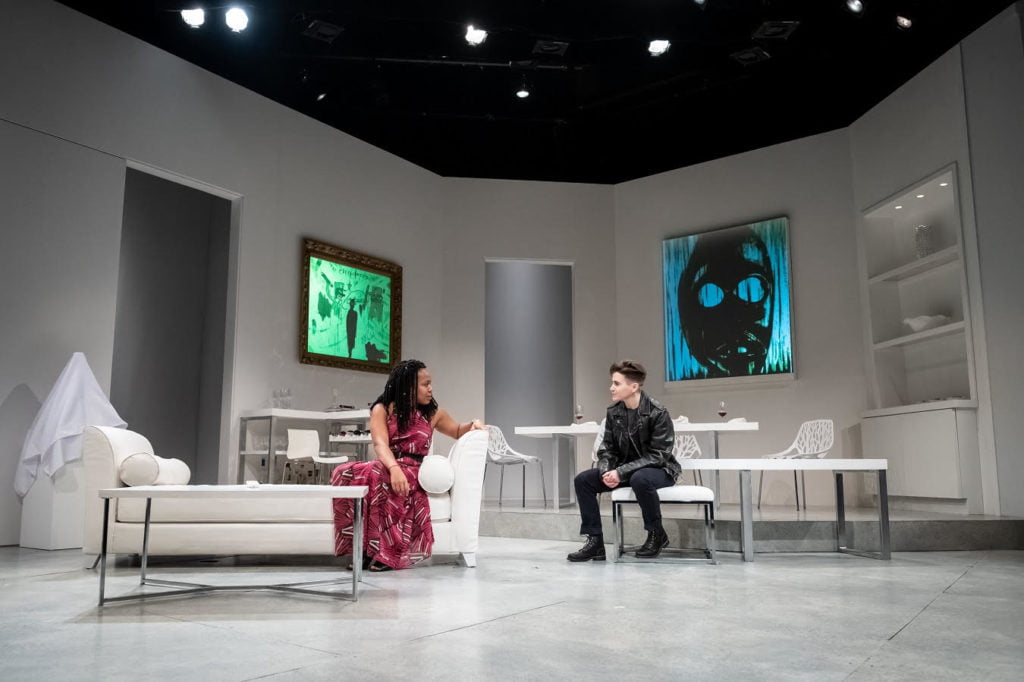 When I first entered the theater, I noticed the stark white set (design by Chelsea M. Warren). Everything from the walls to the furniture was white, but what piqued my curiosity were the white rectangles on the walls. Are they windows? I wondered. The set feels like an urban chic apartment, like you’d see in New York City. Throughout the play, the images on those “windows” changes (projection design by Kathy Maxwell, lighting by Marcus Dilliard). They are pictures showing the artwork that Charles (Bill McCallum) and Virginia (Michelle O’Neill) collect and have hanging on their walls. All are rather grim depictions of violence and death of black people. The couple has invited their friend Eric (John Catron) over for dinner along with the artist Charlotte (Lynnette R. Freeman). Their son Alex (Jay Owen Eisenberg) is also at the dinner.

One of the first lines in the play comes from Eric, as he’s describing Charlotte and her art, “Can you separate the art from the artists?” My mind also asked, “Can the artist separate herself from her art?” It seemed like Charles and Virginia were trying to convince Charlotte that they would be good stewards of her art, and that they should be given the first opportunity to buy her photographs. That they were the kind of people who were open-minded and cared about lifting up People of Color. Alex, their son, is quick to point out how they don’t do that. He asks hard questions about Black Lives Matter, violence against Blacks, the history of prejudice, and the role of White people in social justice. Alex is an activist. 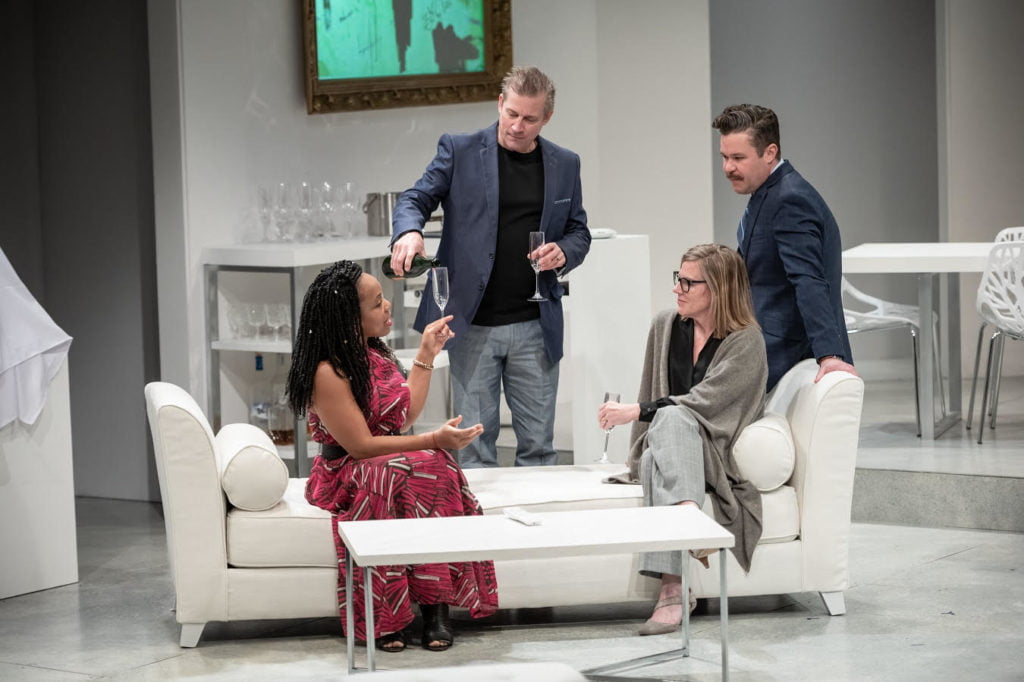 Between the champagne toast and the dessert course, much is revealed. It was a lot to take in. So many words coming at us, mixed with disturbing images, and reactions from both the actors and audience members. At times, I wished I could rewind a scene and hear it again, especially during Charlotte’s monologue about anger. This is a play you could watch several times and hear and see more details and layers each time. Talvin Wilks directs the play in such a way that the actors seem like they’re circling each other. With so much talking, the play could feel like were just listening to people rant, but the movement, and their reactions to each other make it seem real, the way people keep shifting positions and fidgeting around when conversations get uncomfortable.

Charlotte is a photographer, so the idea of perspective is foremost on my mind. She stages some of her shots, depicting violence and death. She also uses her lens to capture images as they happen. When Charles comes to see her about a year after that uncomfortable dinner, she shows him some of her recent photographs and asks him to look at them “without taking them personally.” Can we look at anything without taking it personally? Don’t we all come to any moment with our already built in prejudices? Charlotte says, in that final scene, “We were all raised wrong.” Who we are and the perspective from which we examine all art forms, people, and events are influenced by our upbringing, where we come from, and all our experiences leading up to that moment.

I didn’t have an answer to that chalkboard question when I walked in, and certainly not a quick word or phrase that I could have written as I walked back out of the theater. I had so much to process. If I could go back, now, I would write, “Another perspective.”

You can see The White Card at Penumbra Theatre in St. Paul, MN through March 1, 2020. I recommend going with a few people who will discuss it with you afterwards. I attended with my friend Jackie who is an artist. She says that it is impossible to separate the art from the artist, and for herself, she could not separate herself from her art. When we experience something from another perspective, we have an opportunity to be enlightened.

Journaling Prompt: What does Black art mean to you?