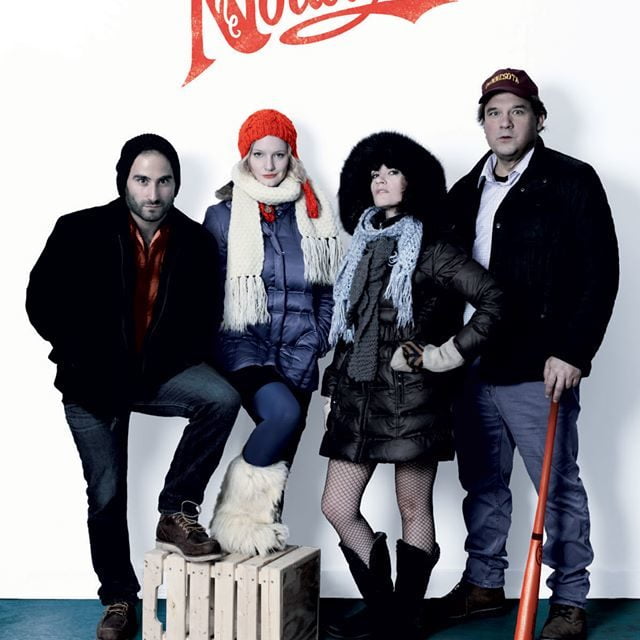 Quote of the Day: Here in Minnesota, you gotta find a lover before the first freeze or else it’s just too late. Betty, from The Norwegians, a dark comedy about a couple-a “Minnesota Nice” hit men and the women who hire them, from Dark & Stormy Productions. Written by C. Denby Swanson who hails from Texas but has been bitten by the Minnesota bitter cold more than once, and is not afraid to make fun of it!

The extreme cold of Minnesota, mixed with their extremely cold Norwegian blood, coupled with recent break-ups, makes Betty and Olive feel murderous. Oh, they don’t want to do the deed on their own. But, they could hire hit men to do it, then all their problems would be solved, and they could move on. Or, not. Enter hit men in parkas, accepting the deal, and doing their own bit of interrogation with plenty of “Uff-das” thrown in. They’re willing to do the dastardly deed, but they’ll be nice about it. With flashbacks to Olive and Betty meeting in a bar and discussing their heartache and ultimate revenge, to present time where Olive meets the hit men, we’re bounced around a bit as an audience following this rather extreme way of dealing with a broken heart. 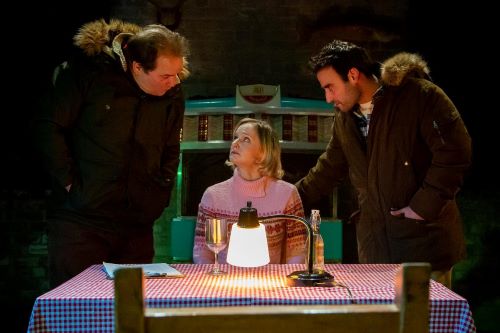 Luverne Seifert as Tor, Jane Froiland as Olive, and Avi Aharoni as Gus in “The Norwegians” a Dark & Stormy production. Photo by Rick Spaulding

Olive, played by Jane Froiland, just wants to move on. If her ex were out of the picture, that would be so much easier to do. She’s witty and intense, and has great physical reactions to scenes and dialogue. This show is filled with hilarious monologues about the cold, the food, and the nice, and not so nice, relationships they foster. Jane is delightful in this role.

Betty, played by Sara Marsh, is a bit darker. It was her idea in the first place to hire someone to off her ex. She plants the idea in Olive’s mind. But, does she really want to go through with it? Sara’s speech and delivery reminded me a bit of Winona Ryder. She has a bit of sarcasm and moments of deep reverie into the current situation. Loved her line that I quoted above. I may, or may not, have said or had, those same thoughts!

Luverne Seifert plays the tough guy Tor, the god of Thunder, don’t you know. He says his lines with a twinkle in his eye and his hands firmly gripping a baseball bat. “The Norwegians invented baseball,” he said, looking me straight in the eye. I sort of smiled and nodded, then shook my head. “It was more fermented, but just the same.” The fourth wall is broken several times in this production, done in a small space in the old Grain Belt Warehouse, an excellent setting for this dark comedy. The dark, gray night with the occasional snowflake added to the atmosphere of this play, that also pokes fun at our gloomy climate and some of its Minnesota/Norwegian residents. Sound and lighting designed by Aaron Newman and Mary Shabatura add to the effect.

New to this year’s production of The Norwegians is Avi Aharoni as Gus. (He’s not Norwegian on his mother’s side.) He might have a bit of Wisconsin in him. I don’t know. He’s rather endearing as a hit man who also has a mark on his back. I think Lisa Jones had fun costuming these four quirky characters with a smattering of Scandinavian colors and Minnesotans’ needs to bundle up! 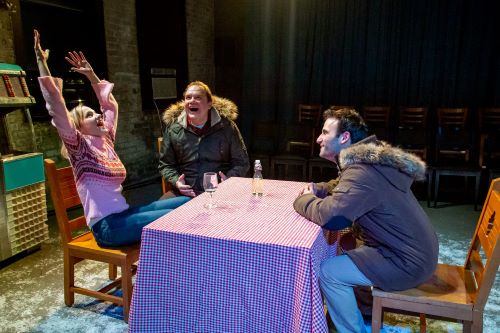 Luverne Seifert as Tor, Jane Froiland as Olive, and Avi Aharoni as Gus in “The Norwegians” a Dark & Stormy production. Photo by Rick Spaulding

The entire play is filled with comedic lines and monologues, witty banter, and dark plot. Just the sort of thing you might enjoy on a dark December night, when you’re not really in the mood for one more Christmas Carol. My friend Joanna and I thoroughly enjoyed it. I am a dyed in the wool Minnesota/Norwegian (with a bit of Swede on my mother’s side). I felt like I’d set myself up for most of the jokes! Joanna comes to us from California, so she had to be indoctrinated into the Minnesota culture. From what I can tell, she even slips into our Minnesota accent from time to time and is known for her “nice” gestures.

I wanted to see this show back in 2016 when they first produced it, but didn’t make it, so this year, I put it on my must-see list for December. You can see Dark & Stormy’s Production of The Norwegians, directed by Matthew G. Anderson, through January 5, 2020 at the old Grain Belt Warehouse, room 202 (enter from the loading dock, back parking lot area). You might feel a little lost trying to find it, so it might be easier to google Bunny’s Bar and Grill, and while you’re at it, stop over there for a bite. Joanna and I had yummy comfort food before attending the show. All of it was excellent. (In fact, I plan to bring my boys there next time I’m in the ‘hood.)

A good time was had by all (except for, maybe, those ex-boyfriends).

Journaling Prompt: How do you keep warm during the deep freeze? And, if you’re not someone who lives in the Northern climes, how do you stay cool during the oppressive heat? How do you think it affects people’s personalities and actions?

F is for Final Curtain 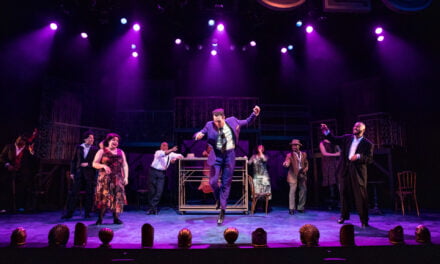