Review of The Rocky Horror Show at Park Square Theatre 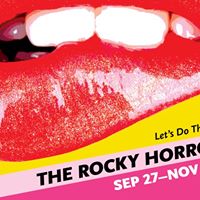 Quote of the Day: “Because we’ve always done it that way,” is one of the most toxic sentences in today’s language – and nostalgia can be dangerous. We crave stories that remind us how we felt in place and time in our lives. This often stops us from new experiences and hearing new stories. from the program notes by Ilana Ransom Toeplitz, Director & Choreographer of The Rocky Horror Show (Book, Music, and Lyrics by Richard O’Brien) at Park Square Theatre. This is a live stage production and differs some from the movie. I was a Rocky Horror virgin going in, so I can’t make a comparison to the movie beyond what friends have described. All I knew about Rocky Horror I learned from people’s stories of attending late night showings of the movie, and an episode of Glee. 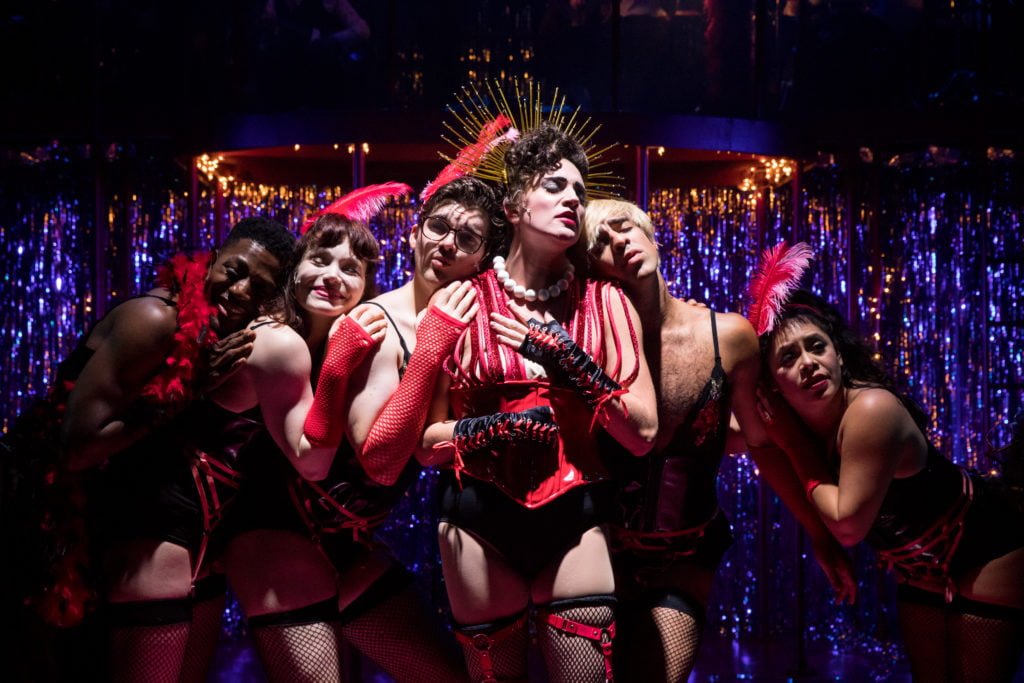 The music is fun and rock-ish, campy, catchy, and filled with attention-getting lyrics. It’s meant to make you blush a little and release some of your sexual hang-ups, gender stereotypes, and sensibilities. It’s really just another parody on Frankenstein, the original story of outcasts and freaks. I admired all the performers who were all in. It takes much energy and courage to play these roles. 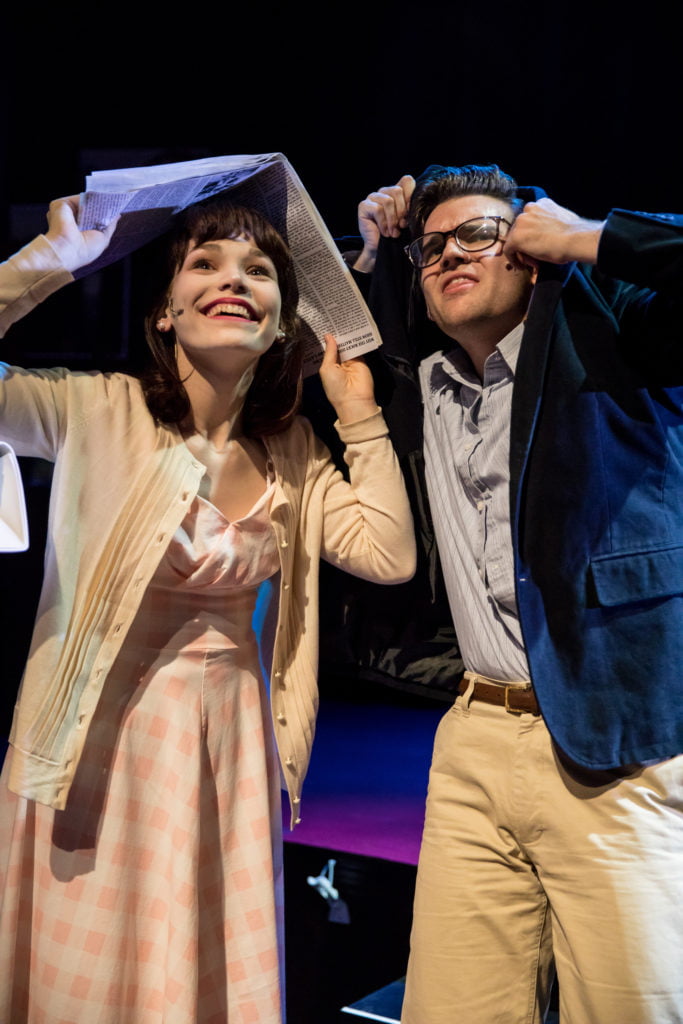 Natalie Shaw as Janet and Ben Lohrberg as Brad in The Rocky Horror Show at Park Square Theatre. Photo by Dan Norman.

Gracie Anderson plays Frank, the mad scientist with an insatiable sexual appetite who has created a stunning Creature (Rush Benson). When Brad (Ben Lohrberg) and Janet (Natalie Shaw) stumble upon the creepy mansion on a cold and rainy night, their sense of self is quickly turned on its side. Gracie rocked it as Frank with strong vocals, self-confidence, and bold intensity. In fact, all the vocals were outstanding. I love seeing the band on stage as part of the show. Under the direction of Andrew Fleser, they made it come alive. Dylan Younger was front and center on the elevated part of the stage for his amazing sax solo, and many other musicians had feature moments. 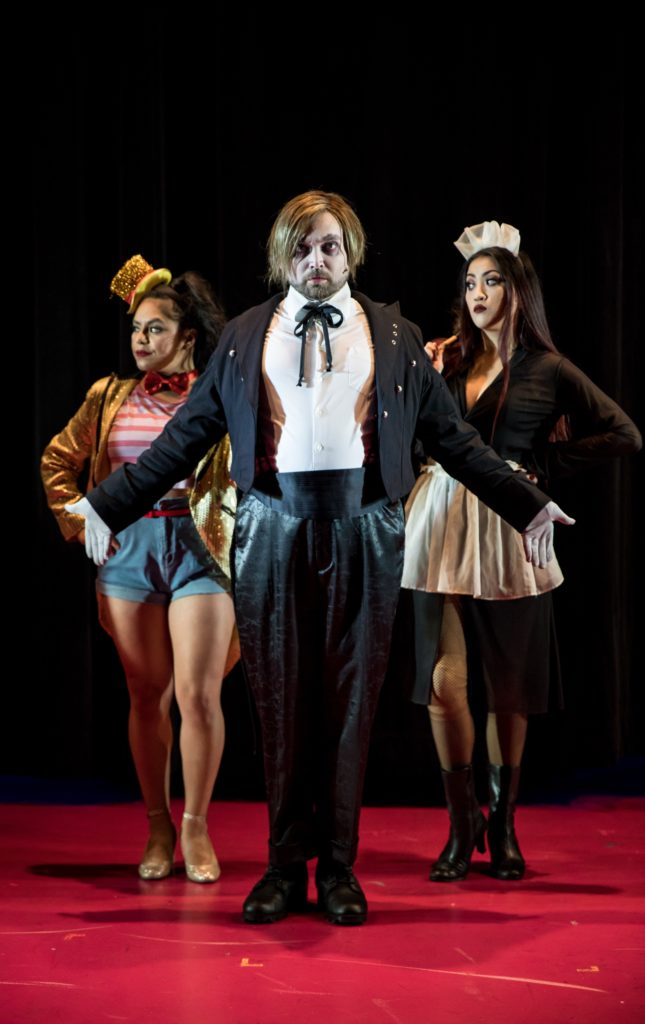 In the movie version, the show opens with a black screen and bright red lips singing Science Fiction Double Feature. In the stage show, the Narrator (Ricky Morisseau) paints the lips of Magenta (Hope Nordquist), and with the help of black light, their lips glow as they sing. It was so cool. Hope has a magnificent voice and stage presence. Ricky helped us understand what was happening in the story and showed us when to use our props. Oh, ya, audience participation is encouraged, to a certain extent. I’m sure its more raucous in a movie theater. You’re not supposed to bring in your own props. They sell a participation props bag at the concession stand for $5. This is a performance space, so they don’t want it totally trashed. I didn’t use all my props, because like I said, it was my first time, but the Narrator gives you cues on when to use them. Most people shouted out “Janet” during Damn it, Janet. And, the crowd went wild for “Antici….Pation!” Since this is a live performance, and we’re there to see the actors, please don’t get up and dance in the aisles. Also, the actors often use the aisles for entrances. (One woman kept getting up during the opening night performance, and it was distracting to everyone.) 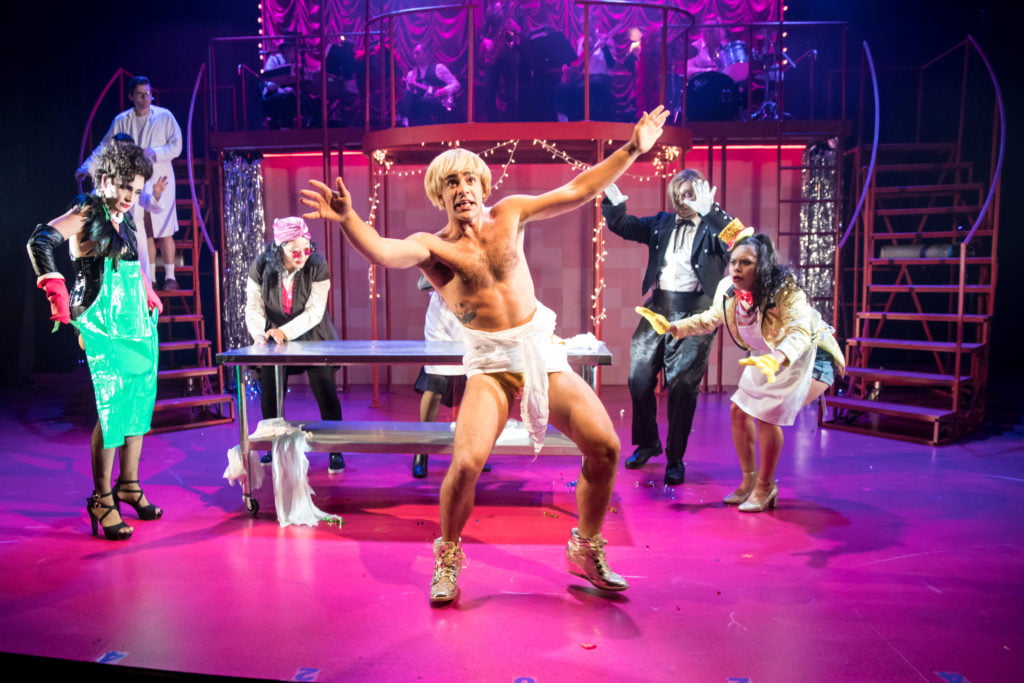 Rush Benson as Rocky and ensemble in The Rocky Horror Show at Park Square Theatre. Photo by Dan Norman.

For all you Rocky Horror fans out there, I believe you’ll get your thrills watching this production. All your favorite characters are up there, and the performers are outstanding. Besides the ones I’ve already mentioned, you have Celena Vera Morgan as Columbia, Sara Ochs as Dr. Scott, Cameron Reeves as Eddie, and Randy Schmeling as Riff Raff. The costumes by Rebecca Bernstein are bold and sexy. The set by An-Lin Dauber is multi-level, so we can see the band, and have actors, scenes, and dancing from floor to stairs to platform. The actors move set pieces on and off. The lighting by Andrew Griffin gives it that sexually charged, wild laboratory look, and the entire production is a rocking good time. 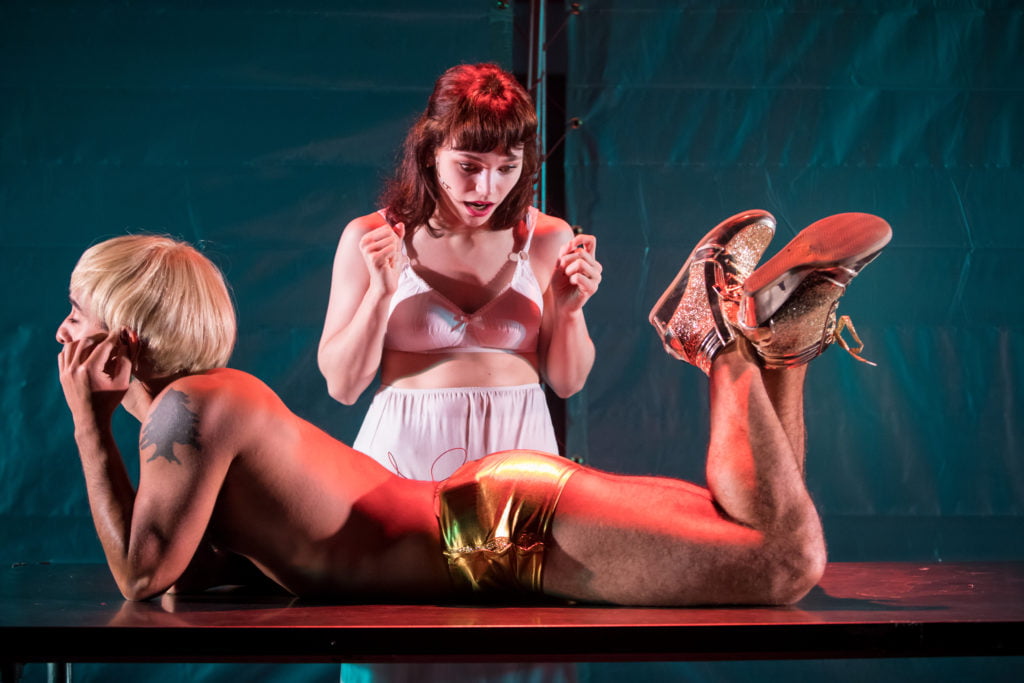 Rush Benson as Rocky and Natalie Shaw as Janet in The Rocky Horror Show at Park Square Theatre. Photo by Dan Norman.

The Rocky Horror Show isn’t for everyone. You need to be ready for a different kind of theater experience. It’s adult themed and boundary pushing, but it’s all done in fun. You can see The Rocky Horror Show at Park Square Theatre in St. Paul, MN through November 2, 2019. It’s a great show for an October/Halloween season romp.

Journaling Prompt: Have you seen The Rocky Horror Show (live stage production) or The Rocky Horror Picture Show (movie)? Did you join in on the newspaper, squirt gun, toast throwing fun? Did you dress up as a character? 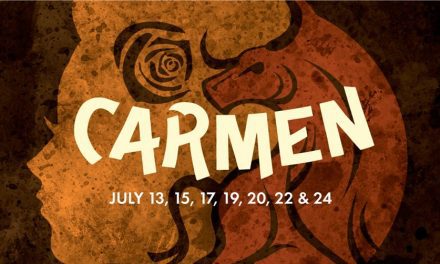