Review of Ride the Cyclone at The Jungle Theater 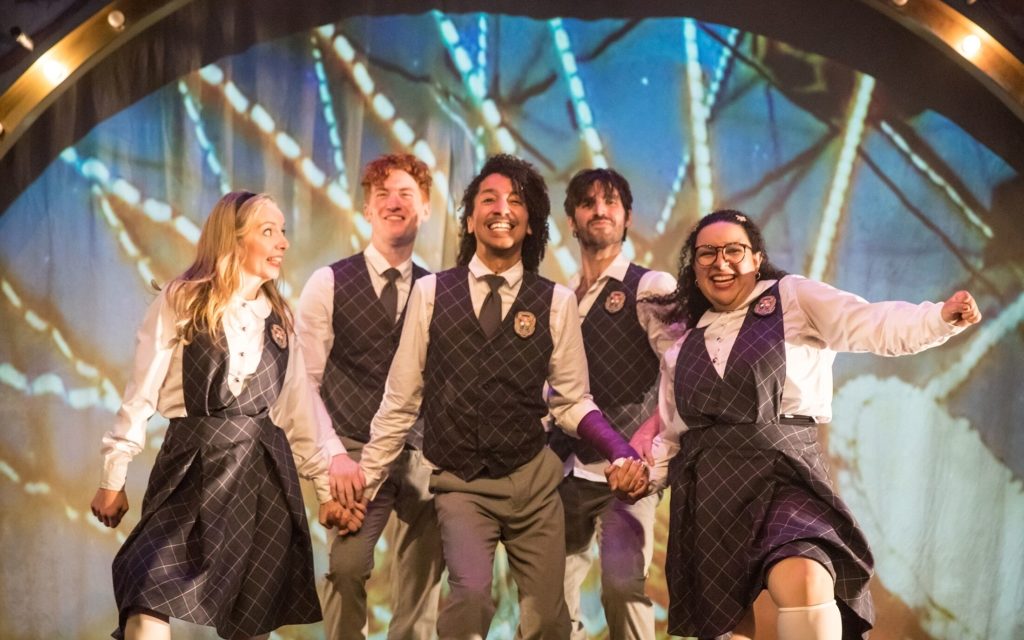 Quote of the Day: That was worth hanging around for. my son Bobby as we exited the theater.

The Jungle Theater has done it again, created a show that is modern, meaningful, and filled with magic and surprises. Artistic Director Sarah Rasmussen directs this wild ride of a musical Ride the Cyclone with expertise and heart. It is something like Dear Evan Hansen and Be More Chill in how it brings young people and their perspective to light. Some of the scenes are weird, some outrageous, others endearing, and all the characters are colorful in their own way. 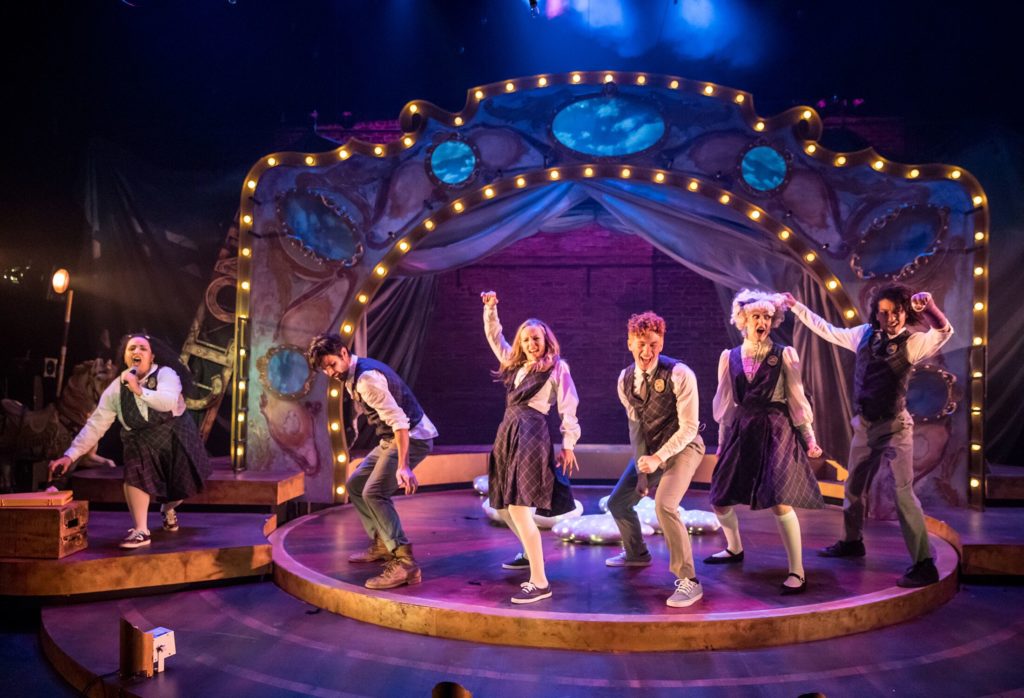 Cast of Ride the Cyclone at The Jungle Theater. Photo by Dan Norman

Jim Lichtschidel, always a treat to see perform, brings life to the carnival soothsayer Karnak. He is being stored in a carnival warehouse where he awaits his fate. As the young choir members find themselves in this strange purgatory, he helps them discover just what it means to live your authentic life and to embrace who you are without apology.

Senior high school students who are all part of a choir are enjoying a day at the carnival when tragedy strikes. They are derailed from their lives and find themselves face to face with the great Karnak and the meaning of their lives. Each one gets a chance to tell their story and to shine in the spotlight for a moment. All of the actors are all in for this production.

Gabrielle Dominique plays Constance, a girl who seems happy on the outside, but is hurting on the inside. She’s funny and talented and cares for other people, even more than herself.

Michael Hanna plays Mischa, the immigrant, the one who has ties to the old country, and dreams of being in love. His story plays out in a fascinating use of projection where he appears to be leaping in and out of a movie in a sort of “Mary Poppins” sort of way.

Jordan M. Leggett  plays Ricky, a young man who fantasizes about being popular and whole. His story plays out in one the most hilarious songs ever written for stage which includes being king on a planet of cats.

Josh Zwick plays Noel who has different fantasies. When he strips off his regular attire to reveal who he really is inside, it was like the butterfly had been released.

Becca Hart is Jane Doe, an abandoned and forgotten creature. She moves like a broken doll. She’s always on the fringes of the group and no one really knows her story. Her performance was outstanding. At one point she is being turned upside down, yet she maintains her body posture, stays in character, and sings in her beautiful perfect pitch. I was blown away by the performance. 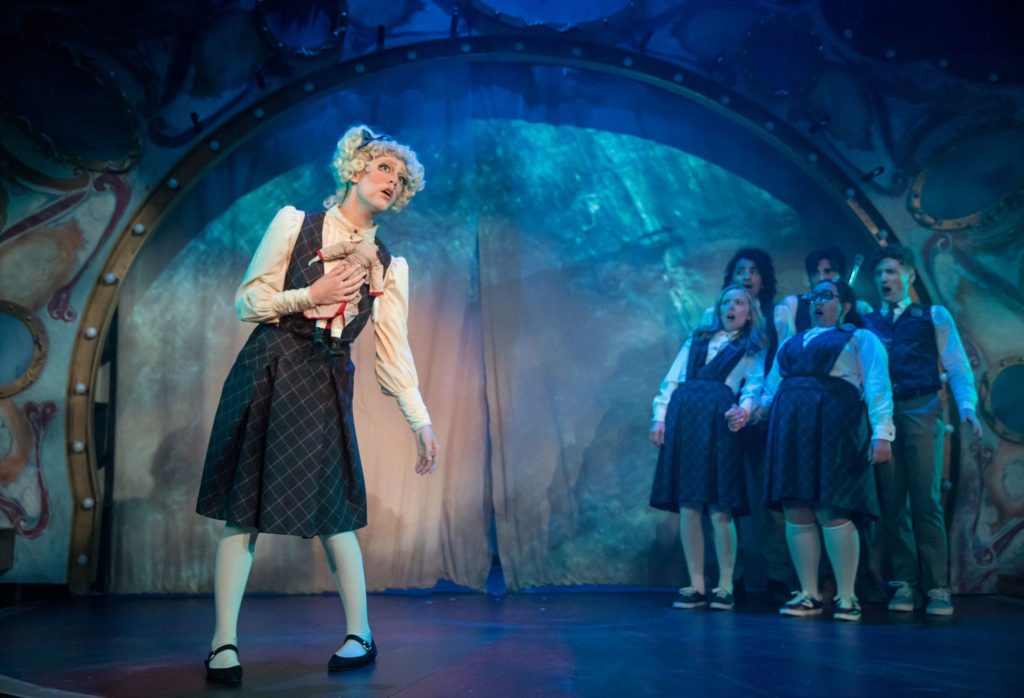 Becca Hart as Jane Doe and the cast of Ride the Cyclone at The Jungle Theater. Photo by Dan Norman

Something truly magical is happening on stage at The Jungle Theater with this production of Ride the Cyclone. The entire creative team earned the standing ovation. Chelsea M. Warren turned their tiny stage into a big top experience. It is both captivating and creepy. Kathy Maxwell’s projections add much to the telling of the story as actors pop in and out of the pictures. Marcus Dilliard is a genius with the lighting, creating great atmosphere and helping us focus on the main action. Trevor Bowen designed costumes that create characters, and Sean Healey was the Sound Designer. Mark Christine is the music conductor and on the keys, leading a live band, off stage. Jim Lichtscheidl is also the choreographer, and those kids had some great moves! 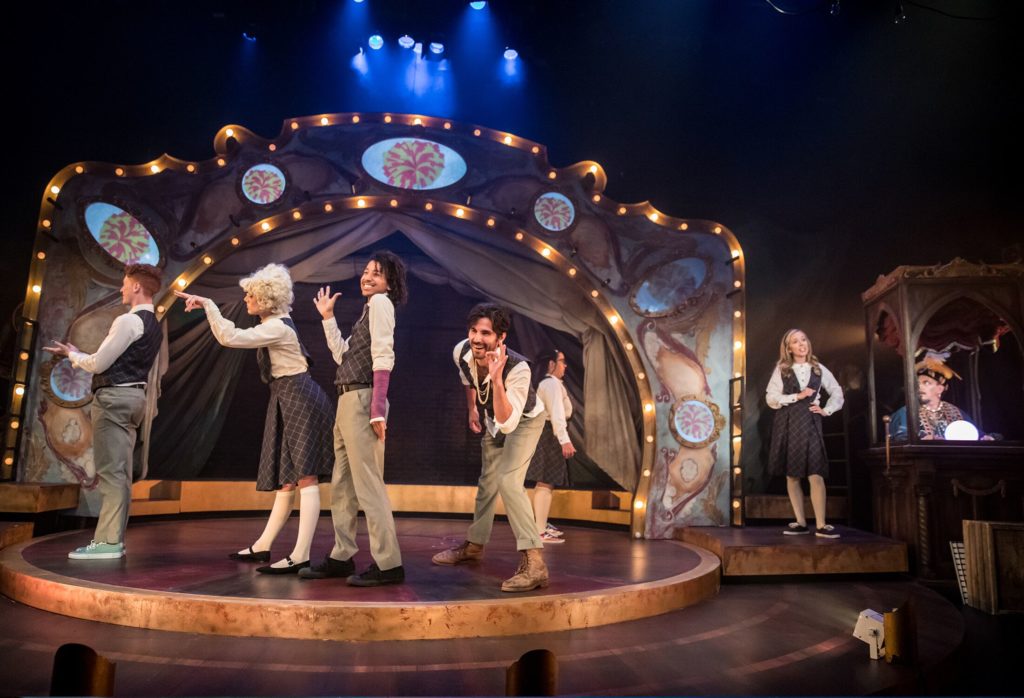 Cast of Ride the Cyclone at The Jungle Theater. Photo by Dan Norman

We had a full weekend, and my son Bobby, an even fuller past two weeks. He’s in the process of moving to Texas and spent his last weekend in Minnesota with me. (I soaked it all up.) We’d gone to Smokey Joe’s Cafe at the Ordway on Friday night (spectacular performance), then spent Saturday at the Gopher football game. I also have a son in the Marching Band. Gopher games are long, and this one was hot. So, Bobby and I blew into The Jungle, just in time for the show, sunburned, wind-blown, rumpled, sweaty, and tired. No time to change clothes, and I didn’t even dare look in the mirror. I was feeling self-conscious and questioning my wisdom in staying for another show instead of heading home with the boy who would be leaving in just a few hours. I forgot all that as I got swept up in the story and glanced at my boy from time to time. He had a smile on his face, and as we were leaving, he said those words (above) that I used for the Quote of the Day.

When your 25-year-old son who is preoccupied with starting a new adventure in a far away state walks out of the theater with you and says, “That was worth hanging around for,” you know it’s a good show, well worth your time, and a great way to spend the last few hours with him. Well done, Sarah, and the creative team at The Jungle. You have your finger firmly on the pulse of modern theater and what draws people in.

You can see Ride the Cyclone, lyric and book by Jacob Richmond & Brooke Maxwell, at The Jungle Theater in Minneapolis, MN through October 20, 2019. Up next is the wildly popular Miss Bennett for the holiday season, and one on my must see list, A Doll’s House, Part 2, starting January 15, 2020.

Journaling Prompt: What does your dream life look like?

Review of The Addams Family at AAAA