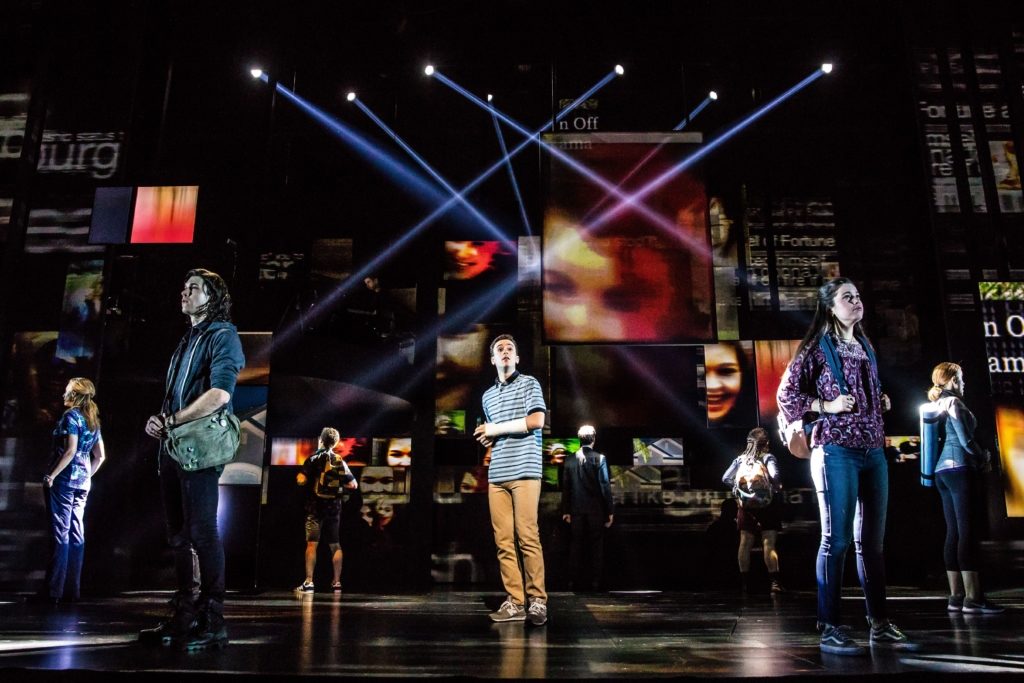 Stephen Christopher Anthony as the title character in the National Tour of Dear Evan Hansen. Photo by Matthew Murphy

The creators of Dear Evan Hansen explore some heavy themes in this dramatic musical about suicide, family, fitting in, feeling alone, social anxiety, and grief. Suicide brings a community to its knees. We’ve experienced it here in the Brainerd lakes area. It hit home for me last year when the younger brother of my boys’ friend and classmate died from suicide. As a kid, he’d been at my house, eaten cookies, played games with the older boys, run through the yard, gotten tar on his feet from the neighbor’s driveway that he’d had redone. He felt bad about that, and I’m sure the tar felt hot and weird on the soles of his feet, so I asked him, “Are you alright?”

When someone dies from suicide everyone wonders, “Could I have done more, paid more attention, reached out? Did I miss something? Should I have asked, ‘Are you alright’ more often?” It’s a horrible feeling. The grief experienced by his family is almost unbearable.

When people in a community experience a tragedy, they need to do something that helps them heal and feel connected. In Dear Evan Hansen, they start a fund to reopen an apple orchard. People gather, talk to each other, and work together to do some good. In our community, they’ve started the Lighthouse Project. All through the first act of the show, I thought of the family of Jake E. Haapajoki. Then, when I was in line for a drink at intermission, I popped open Facebook and saw a post from his brother Alex, letting us know that for his Birthday he was taking donations for the Lighthouse Project.

This story strikes a chord with so many people who experience tragedy, who feel lost and alone, and have that need to feel seen and heard. This important and emotional story comes with a gorgeous score, modern pop with beautiful strings, and a heartbeat of rhythm. I can understand why people put this one on replay. One girl, sitting in front of us, said during intermission, “I’ll never listen to these songs the same way ever again.” The performance brings them to life and explains the story behind it. The actors become these people, and we ache for them.

Watching this performance also showed me that this is more than a story about high school students and their loss and need for connection. It’s also about parent/child relationships. How we need to keep talking to each other, seeing each other, doing things together, even when it’s awkward, even when the young people seem to be pushing us away. We have to be honest about our own struggles and make time for each other. 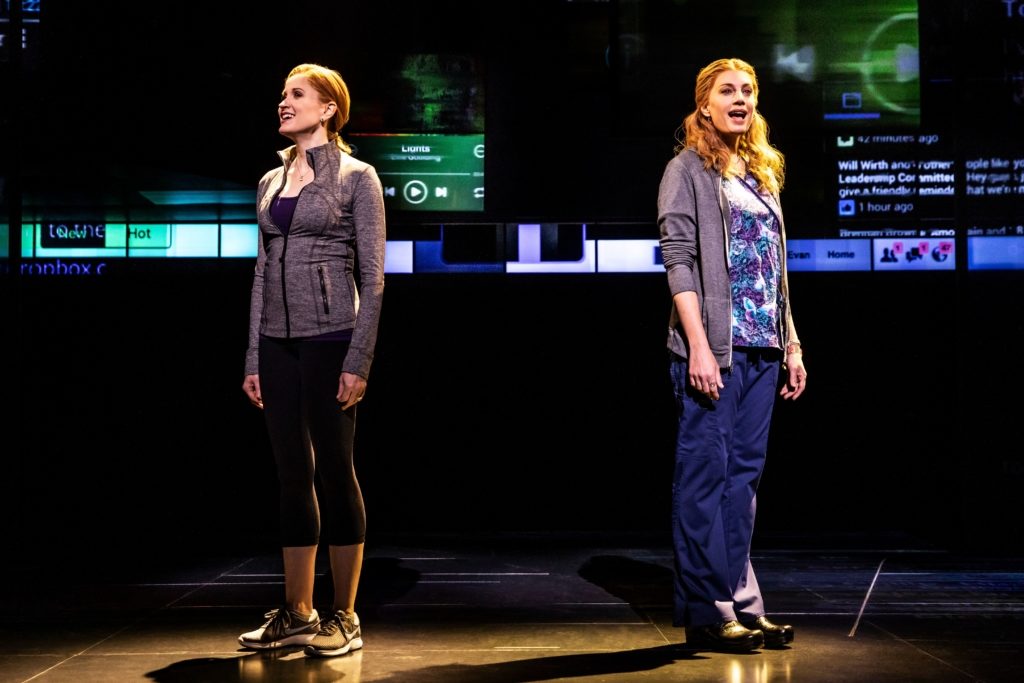 As you can see from the photos, the digital age is a huge part of this production. Screens are everywhere. They help tell the story. Sometimes, names pop up like when you get a text. Much of the interactions are done digitally, so the actors face forward, and the images on the screens show clips of their exchange, or other words and pictures as they deliver the dialogue or sing.

Since this is such a demanding role for the actor, the title character is cast with a lead actor and an alternate. We saw the alternate, Stephen Christopher Anthony, who will be taking over as lead in September. His emotions and portrayal of Evan and all his social awkwardness was genuine. I cringed for his uncomfortable interactions with the girl he liked. I understood why he didn’t correct Connor’s parents when they thought he was Connor’s best friend. The lie snowballs, but sometimes you don’t know how to make it stop. And, his vocals. So sweet.

All of the actors are top-notch with outstanding voices and delivery. I loved Maggie McKenna as Zoe Murphy, Connor’s sister. She has the teen girl sass, angst, and attitude, but also the tenderness that we sometimes forget about. Jared Goldsmith was wonderful as Jared, and Ciara Alyse Harris nailed it as Alana Beck. The actors who played the parents were great. I know them. I’ve experienced their struggles and watched my friends go through the same things. Hang in there, parents. Don’t give up on those distant and mumbling teenagers. When they’re ready to talk, drop everything and listen.

You can see the National Touring show of Dear Evan Hansen at the Orpheum Theatre in Minneapolis, MN through June 9, 2019. You can sign up for a lottery ticket system for reduced priced tickets on their website.

Check for other touring cities and dates on the website for Dear Evan Hanson Tour. Bring someone you care about to the show. Sit across the table from them at the restaurant and be with them. You’ll be glad you did.

Journaling Prompt: Describe a time when you and/or your community experienced a loss, that collective grief that brings you closer to someone. 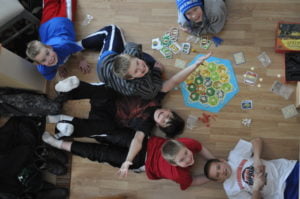 In memory of Jake E. Haapajoki (2002-2018) Smiling up at us in the upper left corner, and always. #smilesforJake

The Heiress Coming to The Jungle Theater in Minneapolis, MN