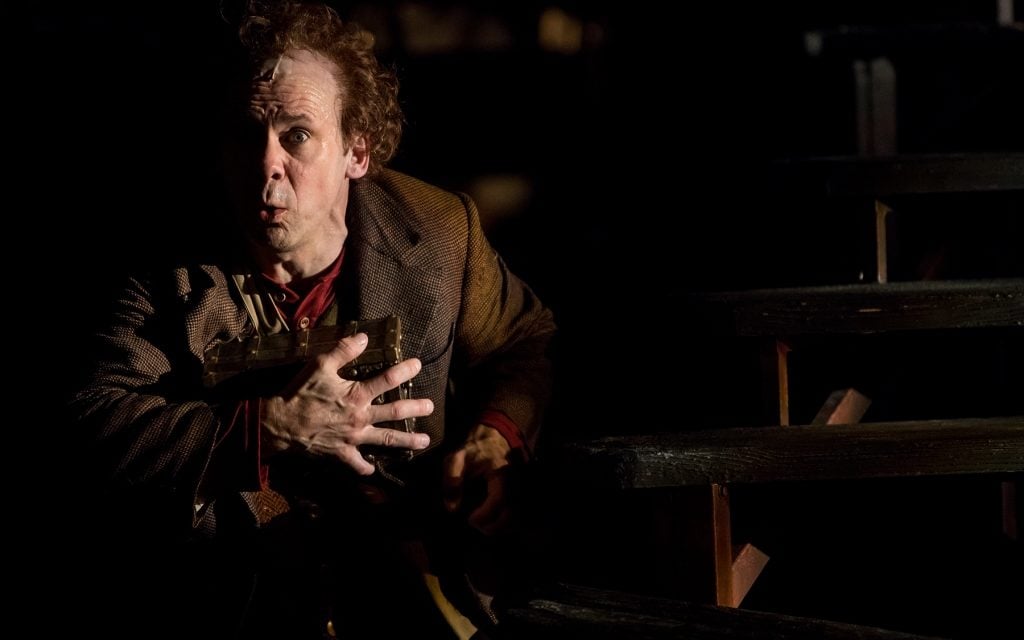 Quote of the Day: There is more in you of good than you know, child of the kindly West. Some courage and some wisdom, blended in measure. If more of us valued food and cheer and song above hoarded gold, it would be a merrier world. J.R.R. Tolkein, The Hobbit or There and Back Again

I am a fan of The Hobbit, the book. The movies, not so much. I don’t like the additions that Hollywood made to turn a single novel into three 2+ hour movies. I have not been to a live stage adaptation before. I know that other versions exist, but I haven’t seen them. The creative team at The Children’s Theatre Company in Minneapolis, MN got to the heart of the story without all the fanfare and hoopla. Greg Banks adapted the book to stage and highlighted all the best parts, characters, and importance of the story. It’s a classic Hero’s Journey. I’ve always admired Bilbo (delightfully played by the inimitable Dean Holt) and his reluctant courage to join in the quest. Through the brilliance of CTC, I now see better the story of the Dwarves and their need to reclaim what is rightfully theirs and why the quest is so important to them. 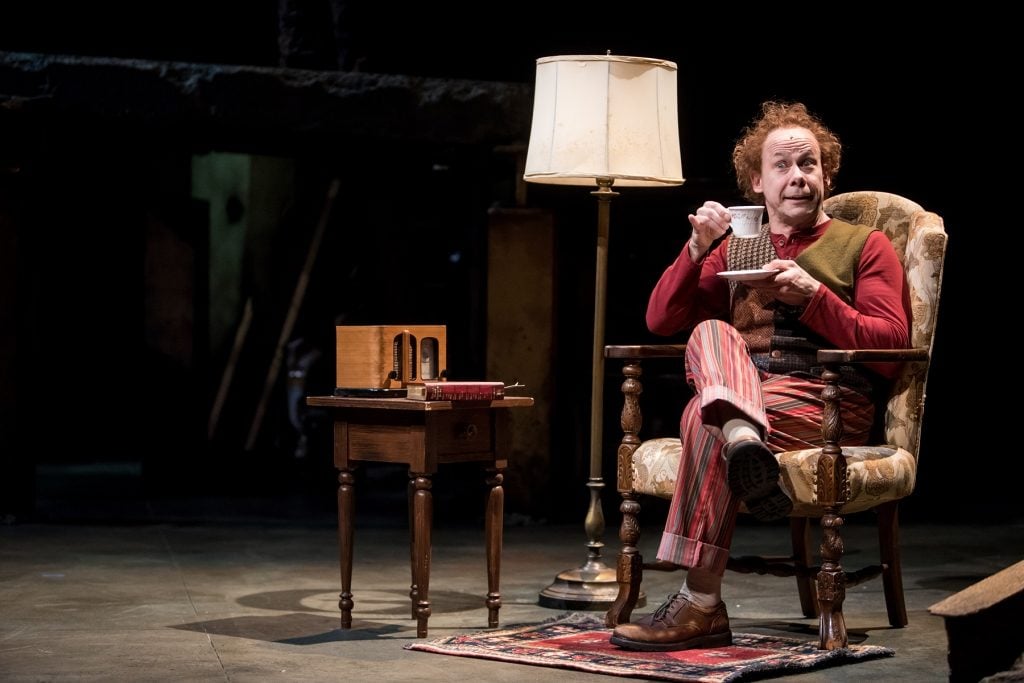 Dean Holt as Bilbo Baggins in CTC’s production of The Hobbit, through April 14, 2019. Photo by Dan Norman

Then something Tookish woke up inside him, and he wished to go and see great mountains, and hear the pine-trees and the waterfalls, and explore the caves, and wear a sword instead of a walking-stick.

I can identify with Bilbo Baggins. He likes his little hobbit hole where he’s safe and comfortable, surrounded by his books. He can have all the meals! Breakfast, second breakfast, elevensies, luncheon, you get the picture. But, when Gandalf comes knocking, “something Tookish” wakes up inside him, the connection to ancestors who didn’t just sit around in their comfort zones. They took a chance and joined the quest. Also, those Dwarves can be very convincing. 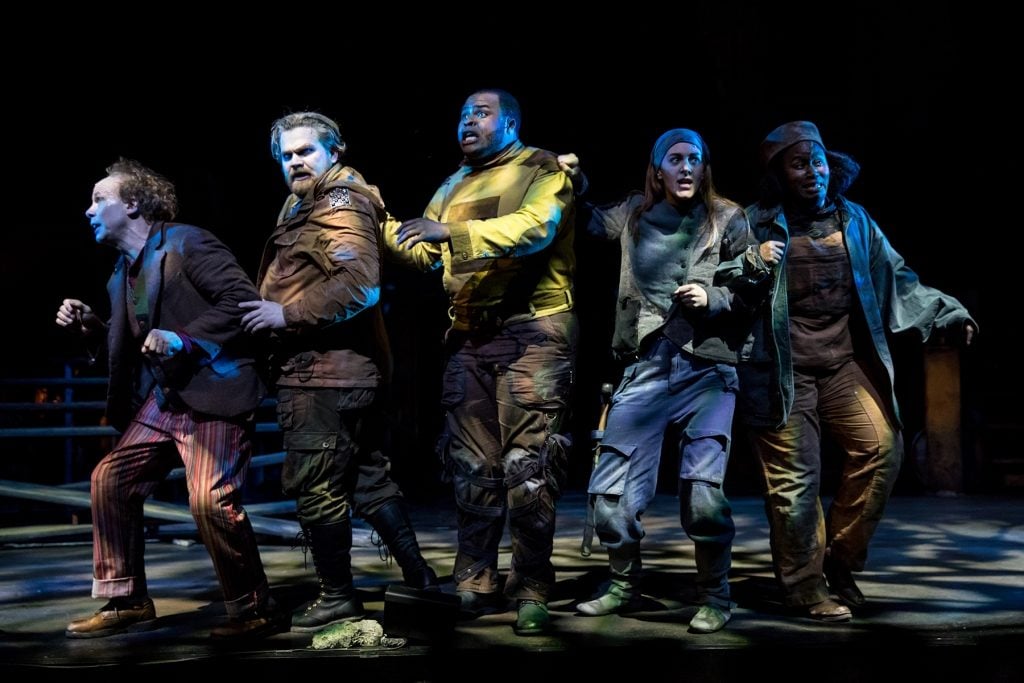 What makes the CTC’s production of The Hobbit so magical is its simplicity. The set design (by Joseph Stanley) feels like an elaborate playground. The steps and platforms are walkways, caves, and a Dragon’s lair. The stage, and beyond, are used to its fullest capacity. The costumes (by Annie Cady) are designed to be both useful and representative of the various characters that the five actors portray in this play. Yes, five actors portray all the main players in this epic tale. Dean Holt is of course only Bilbo Baggins. Joy Dolo is Gandalf, Bombur, a Troll, Gollum, and the Elven Queen. (She was an awesome Gollum, and the cave scene is my favorite in the book and play.) H. Adam Harris plays Kili, a Troll, Smaug – the Dragon, and ensemble roles. Becca Hart is Balin, a Troll, Bard, and ensemble. So fun to see her show her acting chops in these various characters. And, Reed Sigmund plays the complex and determined leader of the Dwarves, Thorin Oakenshield, the Spider, and ensemble. I sat mesmerized, much like all the youngsters around me, at the ease in which the actors slipped in and out of the various characters and moved through the trials of this tale, bringing it all to life. 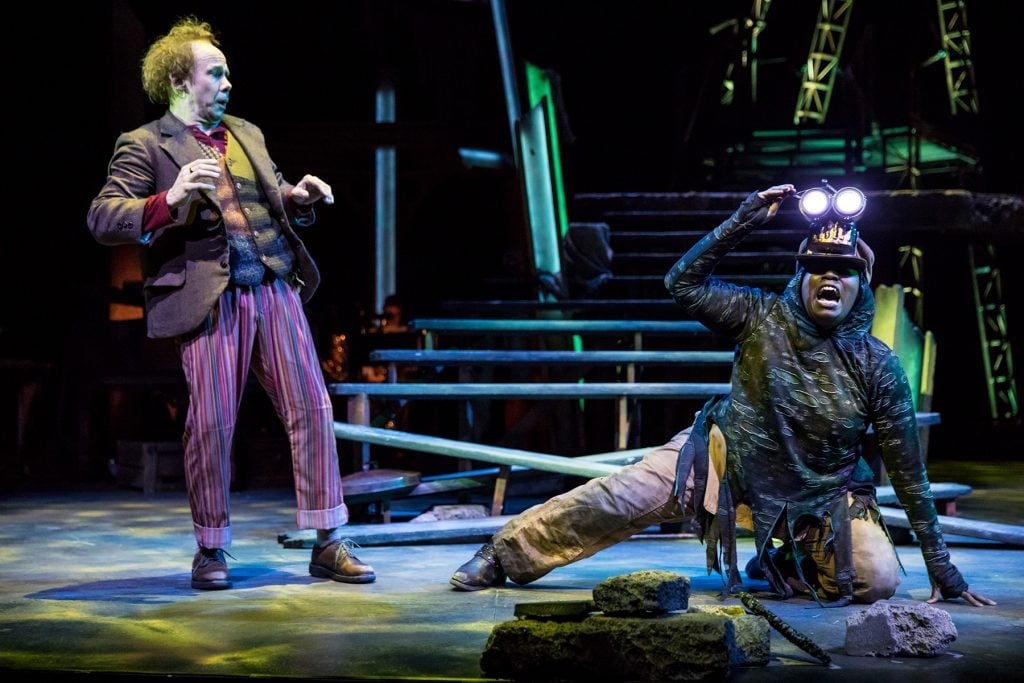 Dean Holt as Bilbo Baggins and Joy Dolo as Gollum in The Hobbit at CTC through April 14, 2019. Photo by Dan Norman

Lighting Designer Nancy Schertler and Sound Designer Sten Severson get high praise for their work. They give us the special effects to enhance the story. It truly is magical how they show that Bilbo becomes invisible when he wears the ring, and how he reappears. Stage effects are also fantastical to watch, especially during the scenes with Smaug. 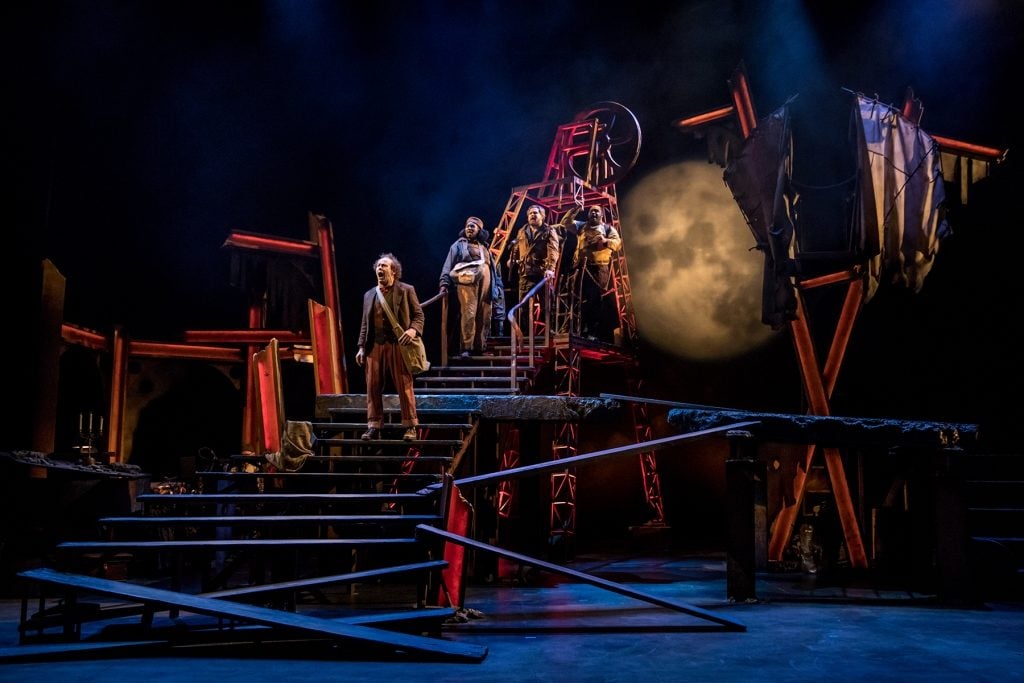 Thomas Johnson composed original music for this show. It’s a play with music, lyrics by both playwright Greg Banks and Thomas Johnson. The multi-talented Victor Zupanc and Bill Olson are on stage playing the music as well as sound effects and the underscore. Bravo to all of you!

My theater companions for The Hobbit had never seen the movies nor read the book. I know! Where have they been? It just wasn’t on their radar, but now, they have plans to check the book out of their library and read it together. Henry, who’s eight, said it was great. “I liked all the parts,” he said, “except for…” No spoilers from me, but there is one sad part. I’m still feeling admiration at how they made this epic tale work on a small-ish stage by using well crafted set, props, lighting, and sound. The actors were all top notch. Truly, I loved the whole thing. I’d go see it again. 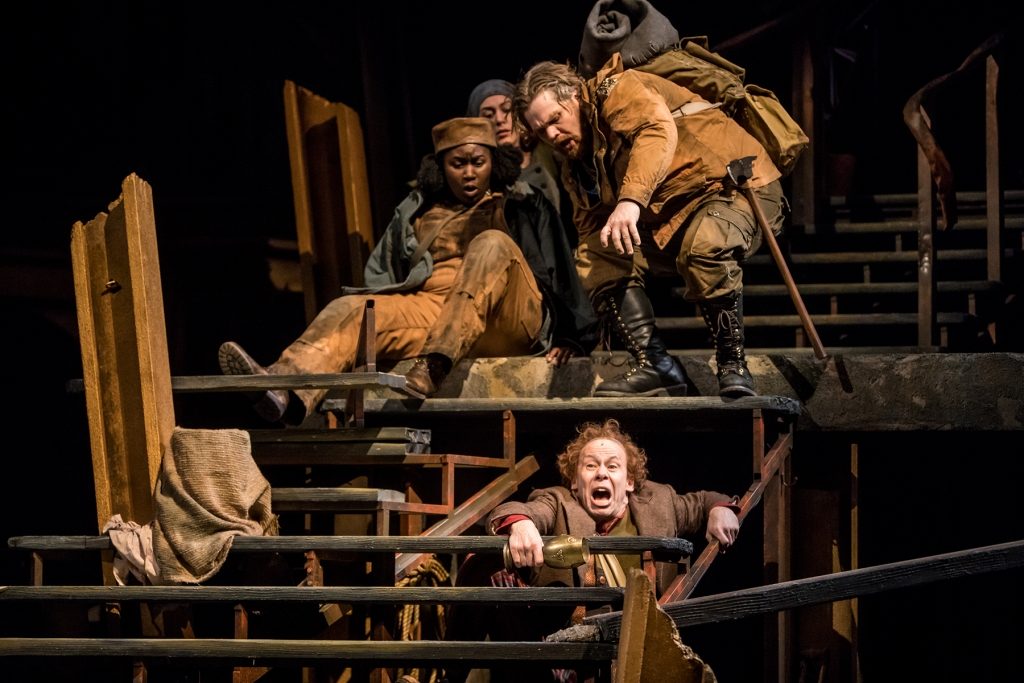 You can see The Hobbit at the Children’s Theatre Company in Minneapolis, MN through April 14, 2019. Bring all your people, young and old. We all need to have a chance to feel “something Tookish” wake up inside of us. (*Note: CTC recommends that children be eight years old and older. There are some intense scenes.) 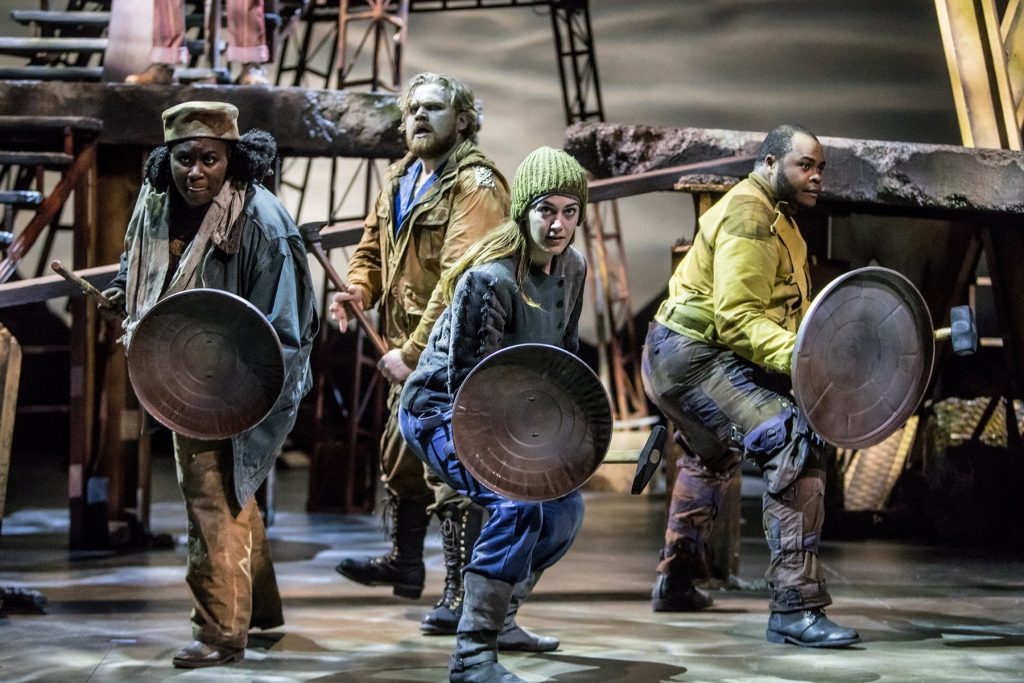 Journaling Prompt: What’s the bravest thing you’ve ever done? What are you still daring yourself to do? 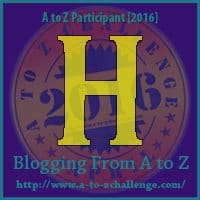 H is for Helicopter Ride over Kauai 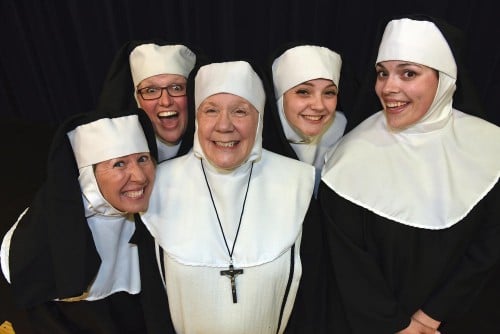 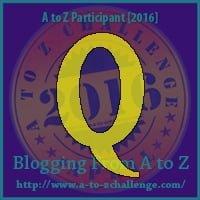