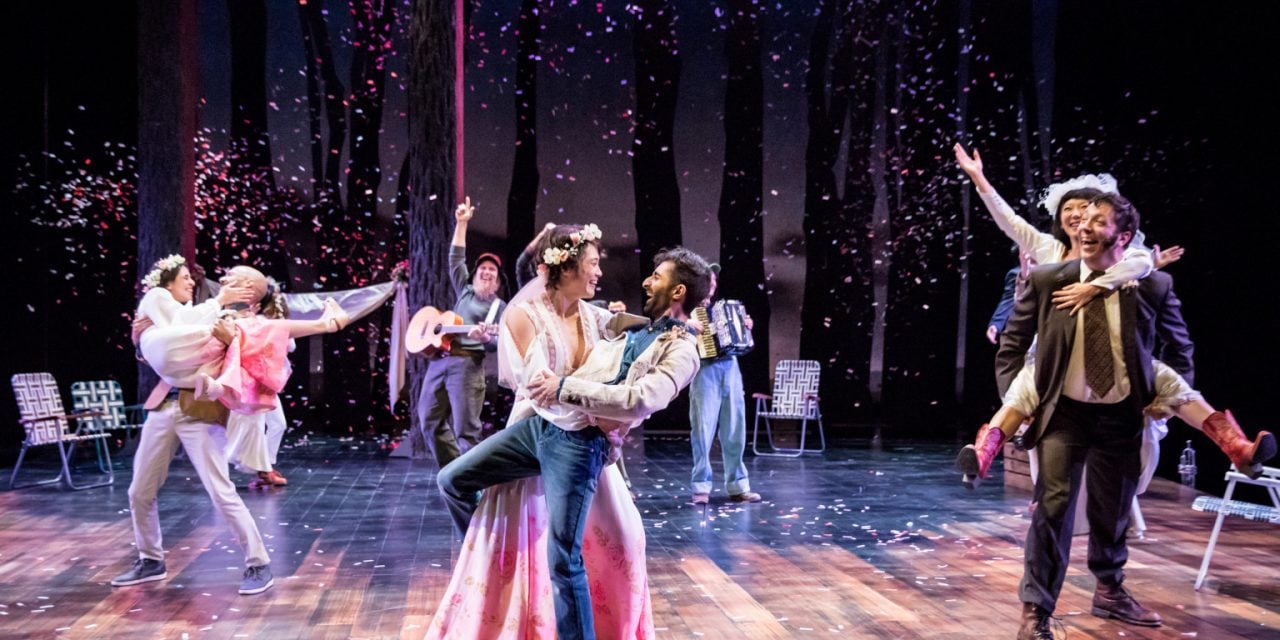 Quote of the Day: Probably the most famous lines from this play come from Jaques who is the melancholy character that reflects on the stages of life.

All the World’s a Stage
And all the men and women merely players;
They have their exits and their entrances,
And one man in his time plays many parts.
His acts being seven ages.

Angela Timberman plays the part of Jaques. From her first line, “I can suck melancholy out of a song as a weasel sucks eggs,” the show came alive for me. Hearing her recite the rest of that line, and the music from the trio of wandering minstrels, was worth the long drive home in the dark. 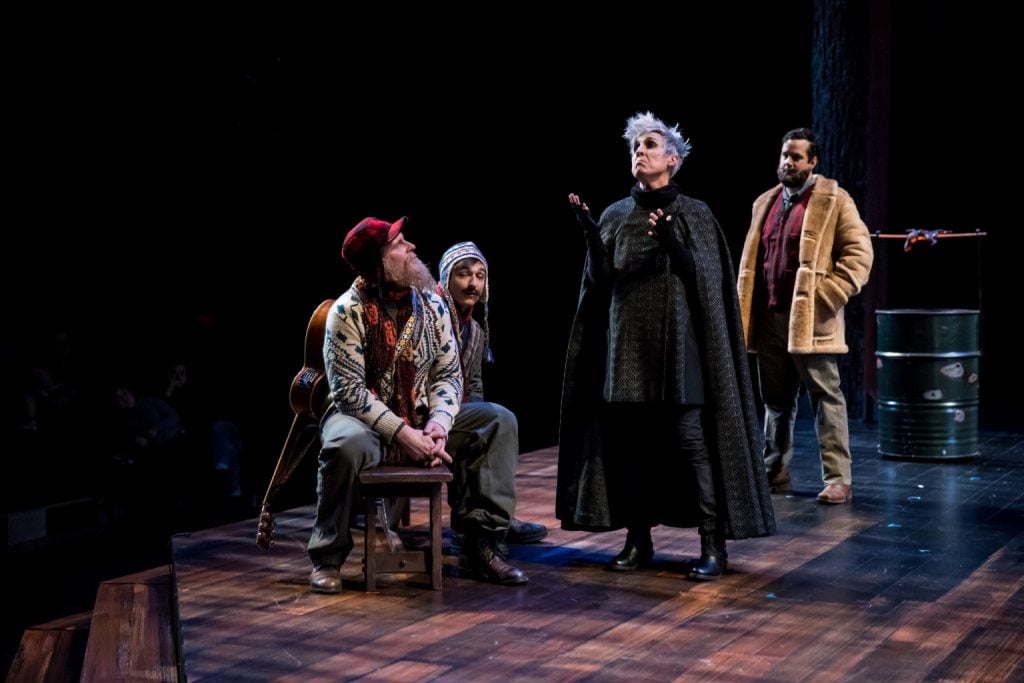 Angela Timberman as Jaques, and the wandering minstrels, Brandon Dahlquist, Ryan Colbert, and Austen T. Fisher, in As You Like It at the Guthrie Theater. Photo by Dan Norman

However, Shakespeare’s comedy As You Like It is far from melancholy. It is light and lively filled with romance and gender swapping. Its playful forest scenes make you smile. It’s like high school when you attended sports events then cruised the main drag on a Friday night. Male rivalry exits in brother brawls. Fathers try to control their daughters and tell them who they can and can’t fall in love with. Besties giggle in their bedrooms, talking about their latest crush and making plans to see them again.

Shakespeare wrote some great lines for this play. Real zingers that put people in their place and make the audience chuckle. A few thoughtful moments like the “All’s the World,” speech. Silly and playful scenes, and no less than four weddings to end the fun. 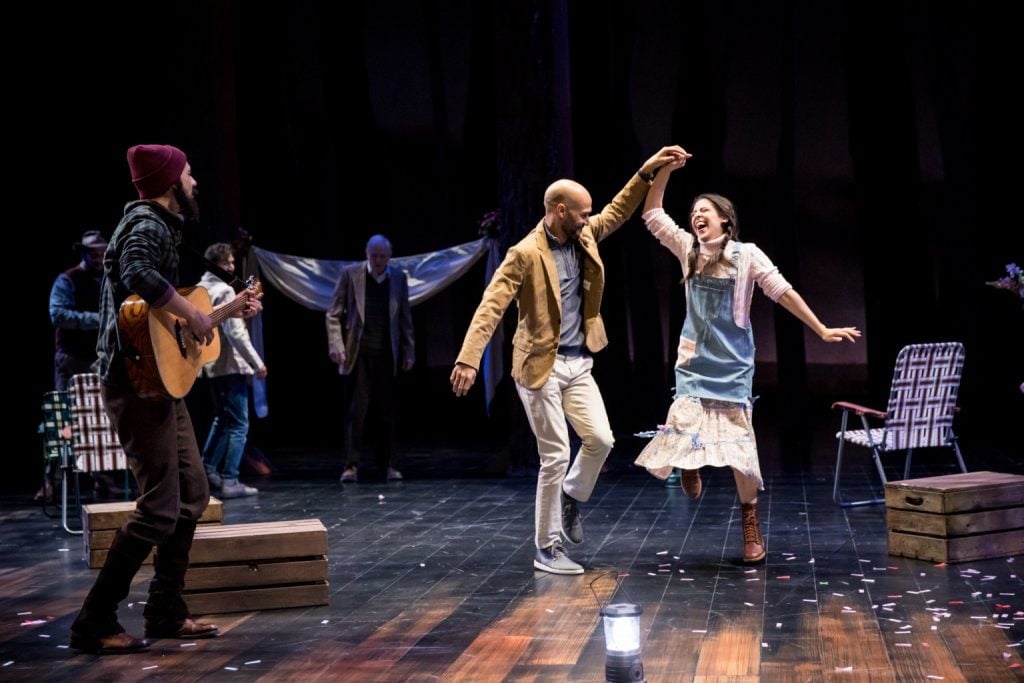 Andrea San Miguel as Celia and Luis Vega as Oliver in As You Like It at Guthrie Theater. Photo by Dan Norman

I really enjoyed the addition of music in this play, original music and sound design by Broken Chord (who also did original music and sound design for the Guthrie’s Enemy of the People). The strings and folk style beautifully fit the mood of the show. The burly guys in beards wearing bomber hats and an “Up North” look, who played guitars and sang, were great, and made me giggle. They reminded me a little of the guys who do “Turdy Point Buck.” (I had to play it for my friend Joanna on our drive home.) Joanna and I both smiled when Christiana Clark came out at the end of the play as Hymen, dressed in a gorgeous costume that looked like a butterfly, and sang the love song and married all the couples. She reminded us of Beyonce’! 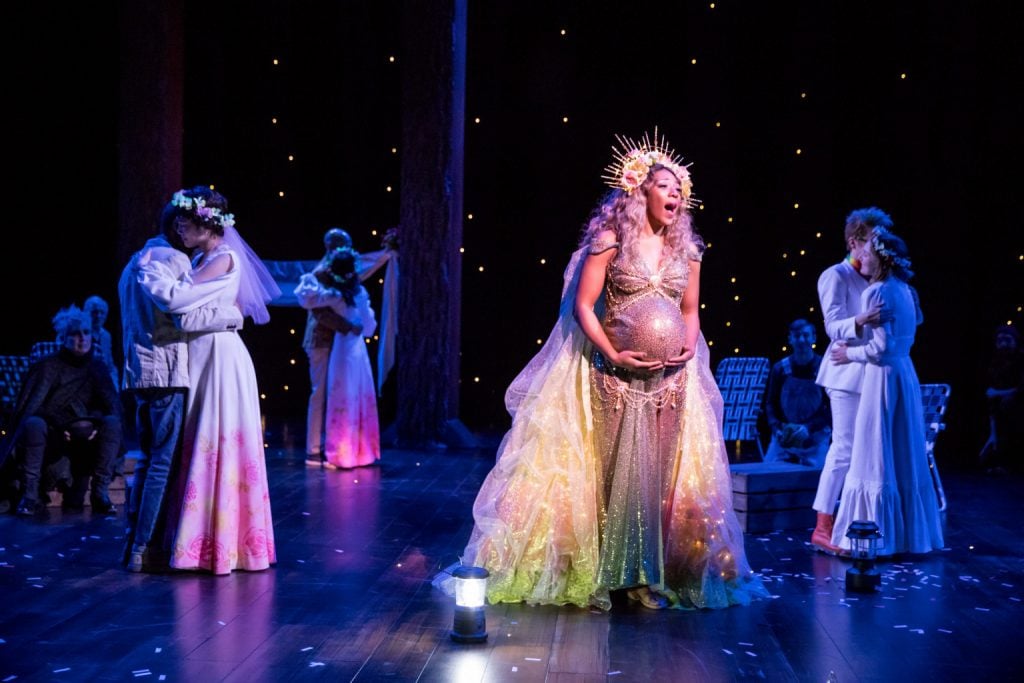 Christiana Clark as Hymen is As You Like It at the Guthrie Theater. Photo by Dan Norman

Speaking of the costuming, my nomination for next year’s TCTBlogger awards goes to Ilona Somogyi. So many beautiful colors, grand and bold for the upper class going to the high end clubs to the “Up North” country look for the forest scenes. The setting (designed by Junghyum Georgia Lee) reminded us of a fairy tale or “Into the Woods.” The entire show is so well cast. Meghan Kreidler is wonderful as Rosalind, and Jesse Bhamrah is an outstanding Orlando. Lavina Jadhwani has directed a wonderful portrayal of Shakespeare’s frolic in the woods with an exceptional, talented, and diverse cast.  Tanya Birl adds choreography that enhances the experience. The numerous students who will see this production, in addition to their regular audience members, will connect and be entertained. I think Shakespeare was in a good mood when he wrote this play. I know I left the show in a better one myself.

You can see As You Like It in all is woodsy glory at the Guthrie Theater in Minneapolis, MN through March 17, 2019.

Journaling Prompt: What are some songs that make you giggle? Did you go cruising on Friday nights? 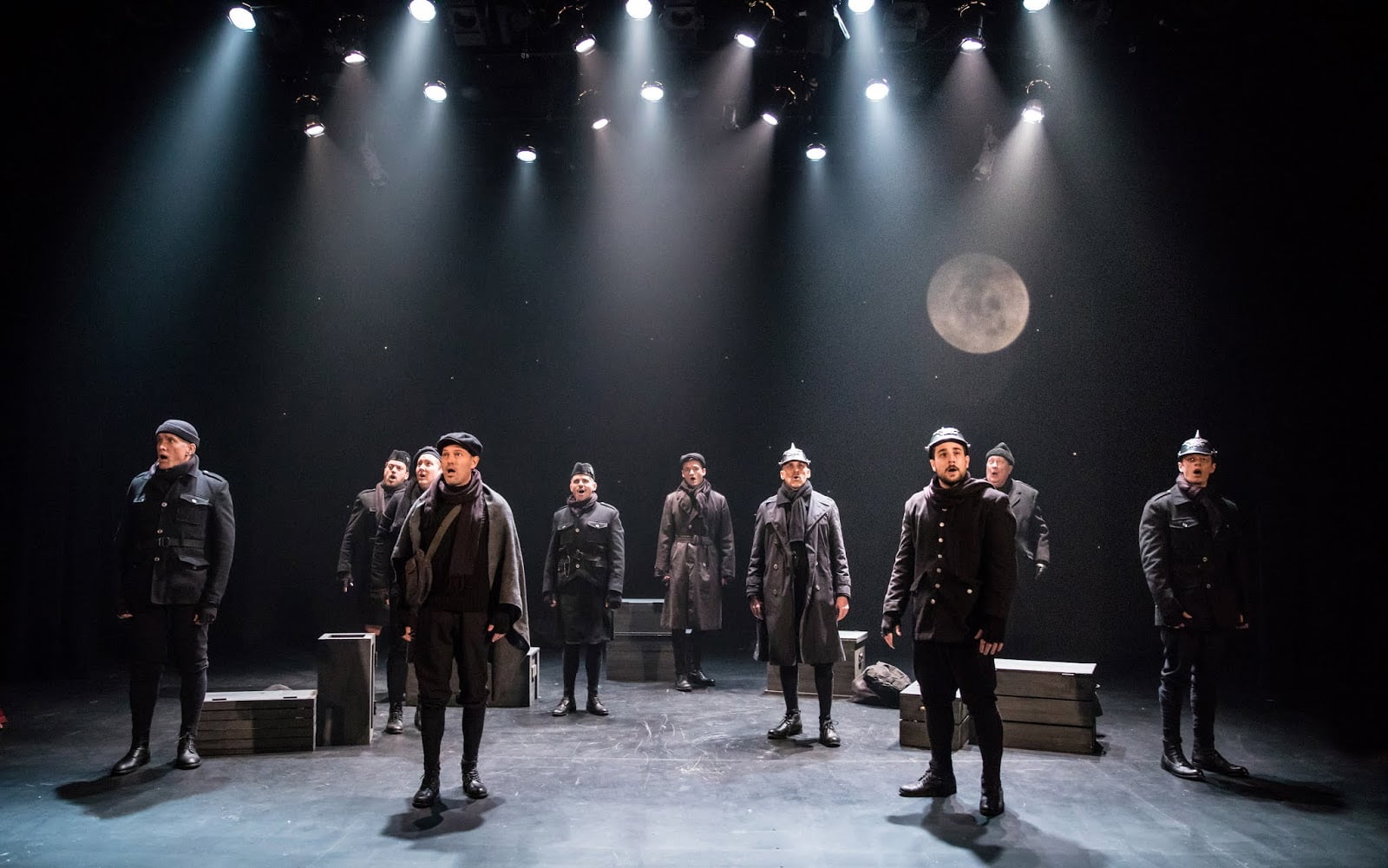