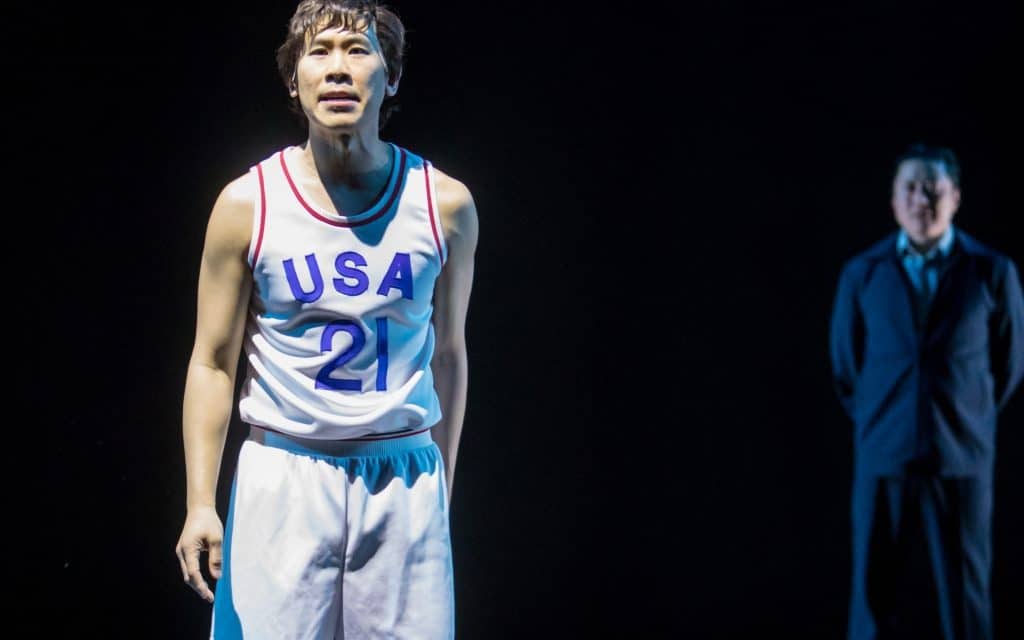 Quote of the Day: Every game is a second chance… at life, to get it right, you fill in the blank. From Lauren Yee’s The Great Leap, directed by Desdemona Chiang, on stage through February 10, 2019, at the Guthrie Theater in Minneapolis. 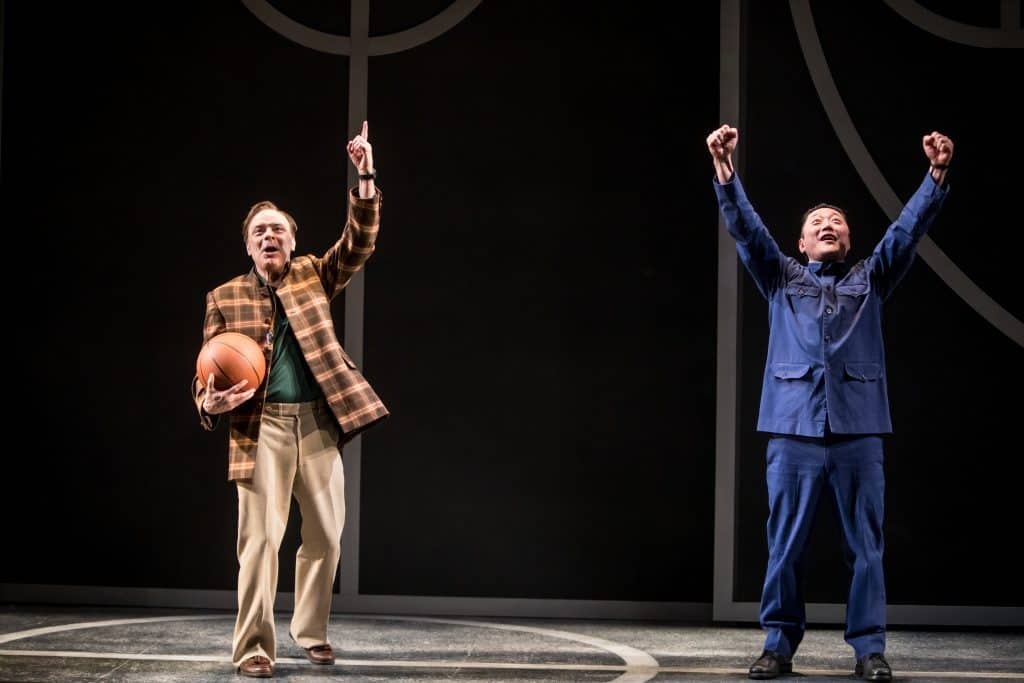 Lee Sellars as Saul and Kurt Kwan as Wen Chang in The Great Leap at the Guthrie Theater. Photo by Dan Norman

Playwright Lauren Yee believes that the game of basketball is a metaphor for life. You can see it played out on stage, and you can quickly see how it plays out in your own life. You fight for the ball, enough personal space to get to the goal and take your shot. You even fight for your right to be on the court in the first place. The four characters in this dynamic play show us the struggles and triumphs as they battle their way to personal success. 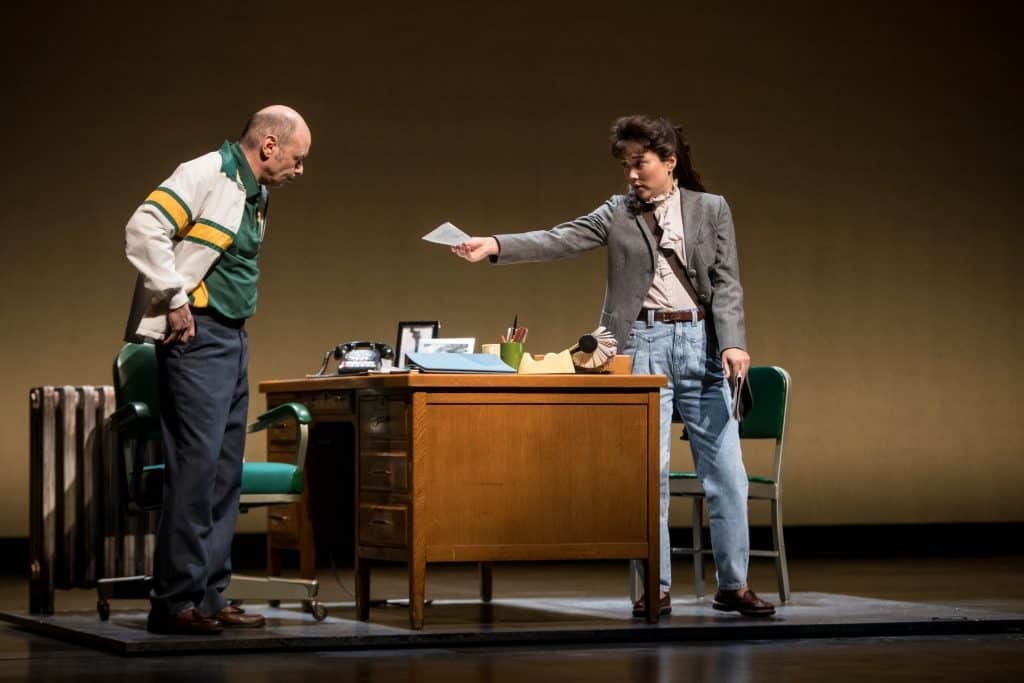 Lee Sellars as Saul and Leah Anderson as Connie in The Great Leap at the Guthrie Theater. Photo by Dan Norman

Manford, or Manny, (played by Lawrence Kao) is dying to get on the San Francisco team. He’s little, but fast, a point guard who has more at stake than shooting 100 free-throws in a row. He is always looking for that “back door” to get inside and prove himself. His mother has passed away and he’s living with pseudo-cousin Connie (Leah Anderson) who is acting as his guardian, or at least conscience. She is often the voice of reason, and also Manny’s strongest supporter.

Saul (played by Lee Sellars) is the coach of the San Francisco team. He has an important history with the game of basketball and a game played in Beijing, China in 1971. There he met Wen Chang (Kurt Kwan) and they exchanged ideas, coaching strategies, and a moment in time. Wen served as a translator which lends itself to some laughs, and confusion. Try explaining what “suicides” are in the sense of sports drills to non-American English speakers, or even non-sports people! 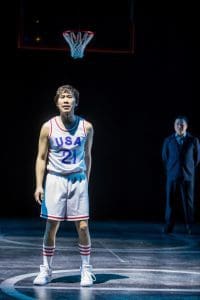 Lawrence Kao as Manford and Kurt Kwan as Wen Chang in The Great Leap at the Guthrie Theater. Photo by Dan Norman

Fast-forward to 1989, early June, Manny has convinced Saul to bring him onto the team that is going back for a rematch in Beijing. Wen Chang is coaching the Chinese team, in high stature in his country, and not at all happy. The battle on the court is small compared to the battles raging outside, between the U.S. and China, always, and in Tiananmen Square.

According to the program notes, (Once again, stellar job on the programs by the Guthrie staff. I study that thing.) Yee says that language is important in this play. Each word and phrase is carefully thought through. The coach, naturally, has a harsher vocabulary, plenty of “locker room” talk and profanity. Pit that against Wen’s formal speech and mannerisms, Connie’s intellect, and Manny’s youthful quick responses. It all works to create character and atmosphere. I felt like I was watching the behind-the-scenes moments in a big game.

It is fascinating to watch a play centered around a sport. The set (designed by Sara Ryung Clement) is a basketball court, the coach’s office, and sometimes side streets and apartments. It all seamlessly flows from one to the other. Director Desdemona Chiang did an amazing job of using the large stage to emphasize the largeness of the court and the countries, and the intimacy of private spaces and lives. Stunning. They wouldn’t be able to pull it off without the expert Lighting Design by Paul P. Whitaker, Sound Design by Sarah Picket, and Projection Design by Tom Mays. The actions and sound effects were carefully choreographed. Helen Huang designed the costumes that fit the eras and characters.

You can see The Great Leap at the Guthrie Theater in Minneapolis, MN through February 10, 2019.

Journaling Prompt: Do you see anything as a metaphor for life, yours or in general?

What is that thing? 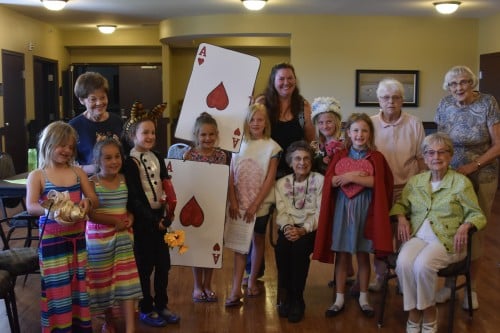 Building Community through the Arts