Review of The Children at the Jungle Theater 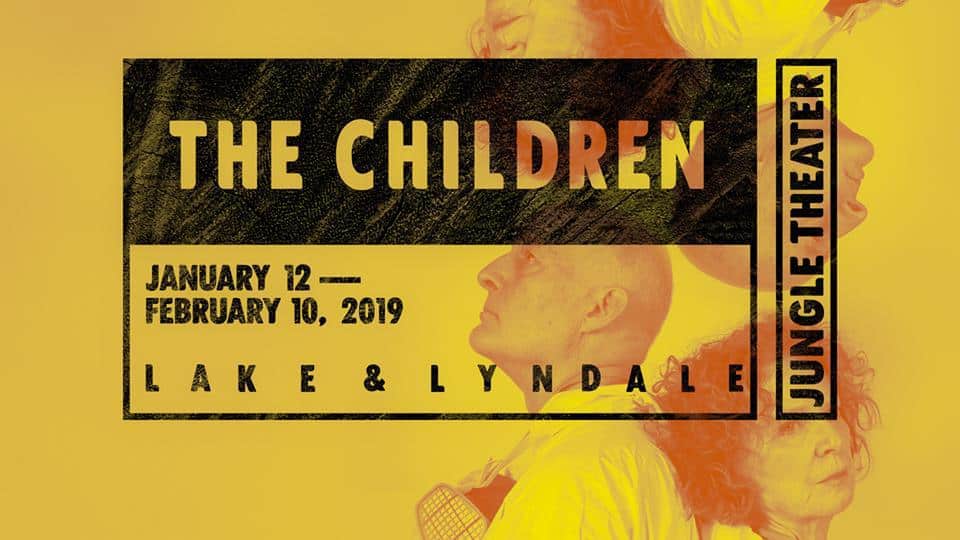 Quote of the Day: If you can’t grow, don’t live. the character Hazel in The Children by Lucy Kirkwood. I’ve heard a similar saying, “When you stop growing, you stop living.” Our book club talked about this at our latest meeting. The older we get, the more opportunity we have to see the world in a new way. Old beliefs and opinions are challenged, and we learn from our mistakes. 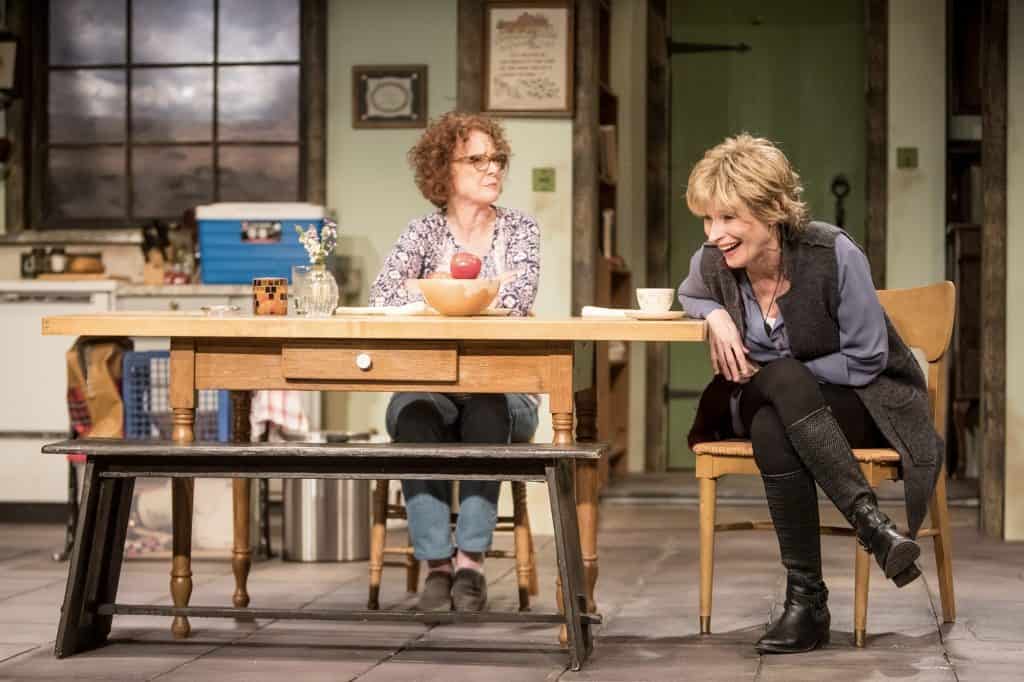 Linda Kelsey as Hazel, Laila Robins as Rose in The Children at The Jungle Theater. Photo by Dan Norman

In The Children, playwright Lucy Kirkwood sets up a scenario like the Fukushima nuclear power plant disaster that resulted from the Tsunami and earthquake in Japan in 2011. Three retired British scientists are taking refuge in a cottage in England, just outside the radiation zone from the nuclear disaster that happened there. We are brought into their complex relationships with each other, their past, and their responsibility as scientists towards the disaster.

At first, the premise of the play seems heavy. And, it is, when you spend time examining the reality of such a disaster. It is also filled with humor. These characters, all of them in their late sixties, have lived a full life. They’ve loved and lost. They have children of their own, and satisfying careers. The opening scene between Hazel and Rose had me laughing out loud and practically snorting. It helped that we had somehow set ourselves up for the jokes. I brought my son Charlie and his girlfriend Lily, both U of MN students, to the play. Before seeing the play, we walked around the Lyn-Lake area where Lily kept pointing out all the yoga studios, and we made reference to the “it doesn’t take a rocket scientist” line at dinner (at Moto-i across from The Jungle, delicious).

We spent the drive back to Lily’s house discussing the play. We all agreed that it would be a great play to watch and discuss in an Ethics class in college. The scientists had to wrestle with their responsibility in this disaster. They helped design the power plant and its technology. Now, the worst case scenario was reality. Do they stay in a safe zone, or face the problem head on? 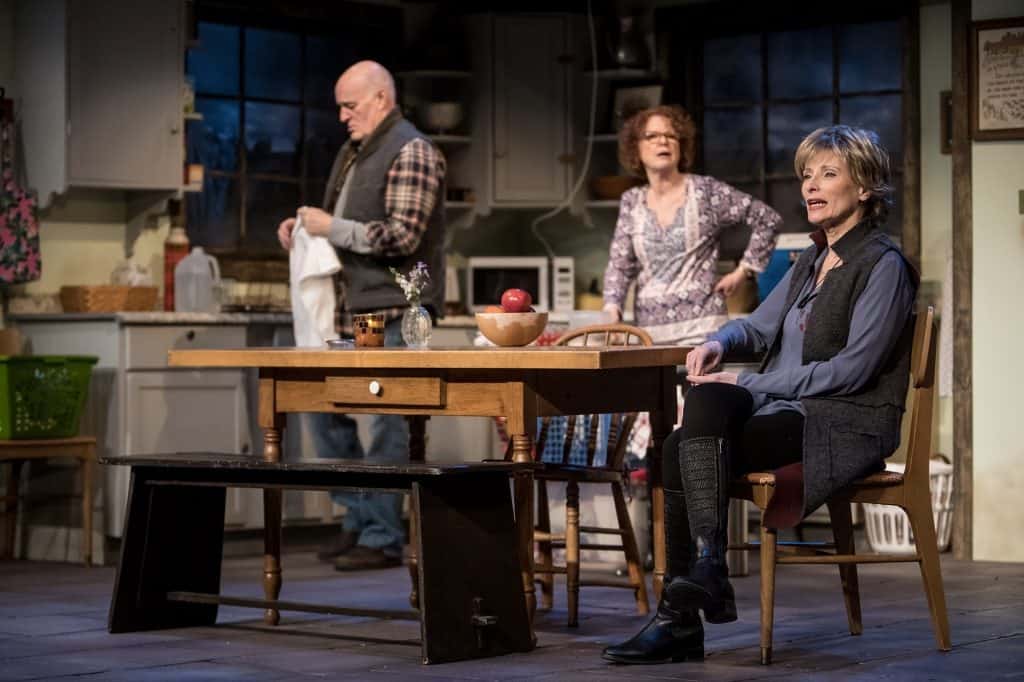 Stephen Yoakam as Robin, Linda Kelsey as Hazel, and Laila Robins as Rose in The Children at The Jungle Theater. Photo by Dan Norman

We were all blown away by the stellar performances of the cast. All of them have had extensive careers on stage, film, and television. Their interactions with each other gave us the feeling that they genuinely had life-long connections to each other. It felt like we were sitting in the room with them witnessing their interactions. Director Casey Stangl gives this place life. Everything about this play felt very real and immediate, down to the dorm-sized fridge in the set. (Excellent set design by Chelsea M. Warren.)

Linda Kelsey (Hazel) is a Minnesota native and graduate of the University of MN and has performed on many Twin Cities stages. She is best known for her role as Billie on the Lou Grant show. Hazel is that fussy person who eats mostly vegetables, walks and does yoga, and wears sun screen even when the sun goes down. She has planned for this disaster. The cottage is her refuge.

Laila Robins (Rose) is a St. Paul native and has had an extensive career in film and television, recently in The Handmaid’s Tale, The Code, and New Amsterdam. She is an excellent stage actor as well. Her character Rose has a more colorful past. She never married and doesn’t have children of her own. She is the one who wants to do something about the disaster and shows up at Hazel and Robin’s cottage to talk to them about it. Her relationship with them has a long history.

Stephen Yoakam (Robin) is a longtime member of the Twin Cities theater community and a founding member of Mixed Blood Theater. His performance last year in The Jungle’s The Nether was creepy and good. I still think about it. His character Robin is a typical guy, in some ways, and more complex in others. Let’s just say he’s easily distracted and doesn’t hesitate to follow his urges. And, yet, he is a person with deep connections and a sense of responsibility. 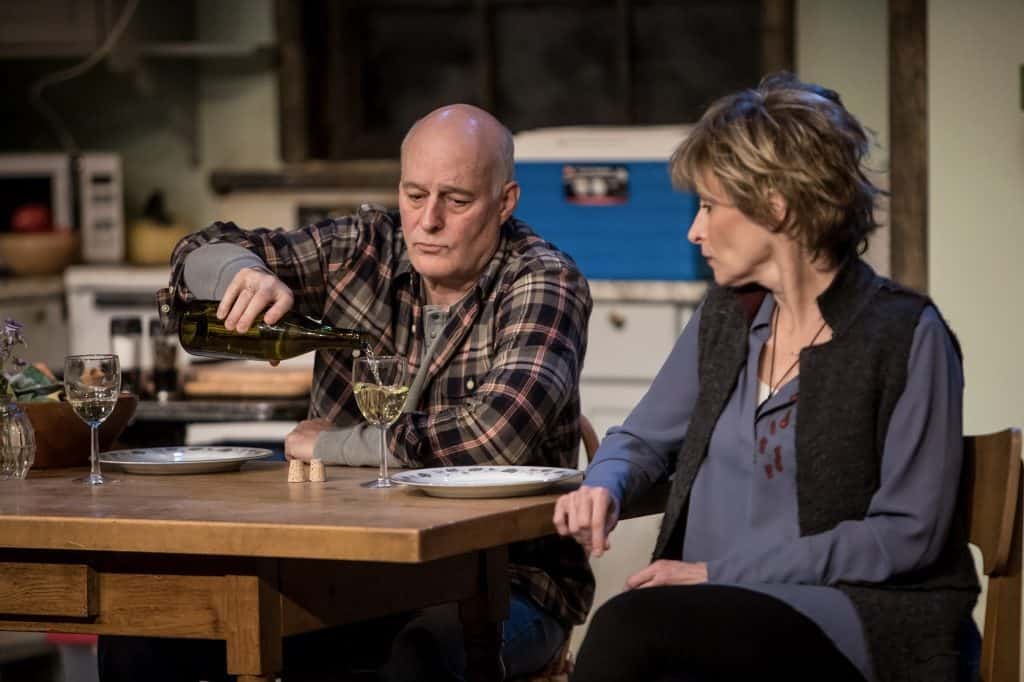 Stephen Yoakam as Robin, Laila Robins as Rose in The Children at The Jungle Theater. Photo by Dan Norman

The Jungle Theater is the first theater to produce The Children after its run on Broadway, where it received a Tony nomination, and the UK, where it won numerous awards. It runs one hour and 45 minutes, no intermission, and is an intense, humorous, heartfelt look at what we are doing to the Earth and how we’re leaving it for the children. “I can’t imagine a better cast and creative team to tell this story,” says Jungle Artistic Director Sarah Rasmussen, and neither can I. Go to this one! Bring young people if you can (high school or older) and plan to have dinner afterwards because you’ll have much to discuss.

The Children plays at The Jungle Theater in Minneapolis, MN through February 10, 2019.

Journaling Prompt: Have you ever left a mess for someone else to clean up? What responsibility do scientists have to their creations? 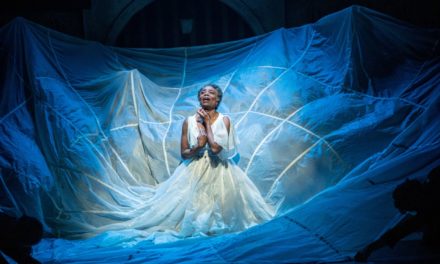