Quote of the Day: Why is it that men can do anything they want, and when there’s controversy, the woman gets blamed for it? A paraphrase of a poignant line/moment in The Wickhams, written by Lauren Gunderson and Margot Melcon, directed by Christina Baldwin, premiering at The Jungle Theater in Minneapolis this December. It’s wonderful.

Cast of The Wickhas: Christmas at Pemberley at the Jungle Theater in Minneapolis, through December 30, 2018. Photo by Rich Ryan

The Wickhams is a delightful spin-off from Jane Austen’s famous Pride and Prejudice. The writing duo of Gunderson and Melcon also wrote Miss Bennet: Christmas at Pemberley, which the Jungle produced in 2017. The Wickhams is what they dubbed a “side-quel.” They are the upstairs/downstairs stories of the Bennet sisters, their beaus, and the servants. The Wickhams takes place downstairs in the kitchen where the biscuits are, along with the dirty laundry, endless chores, and the truth. 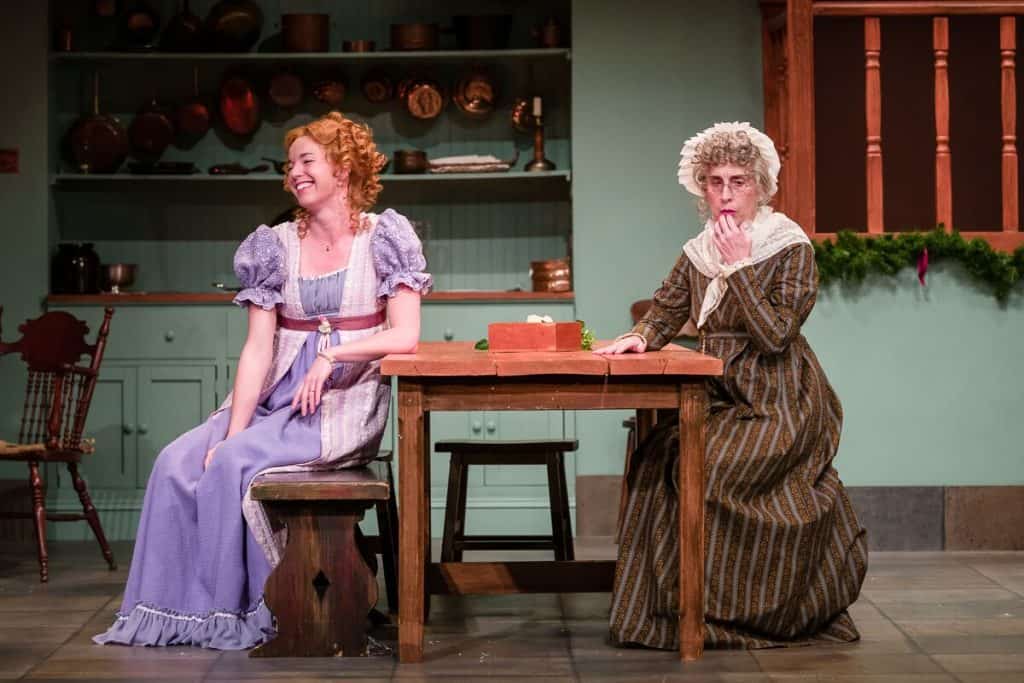 Kelsey Didion as Lydia Wickham and Angela Timberman as Mrs. Reynolds in The Wickhams: Christmas at Pemberley at the Jungle Theater, through December 30, 2018.
Photo by Rich Ryan

The writers confess that they take a few liberties with the characters and the rules of society of the times, but what they create is entertaining, thought-provoking, and just what we need as we examine the roles and rules of men and women in any society/relationship. We need to hear Cassie demanding to be treated with respect. We need to see the truth behind Lydia’s actions and the kind of man she married. We enjoy seeing that Mr. Darcy and Elizabeth are still as smitten with each other as they day they met, and we need to connect with characters who aren’t afraid to speak their mind. 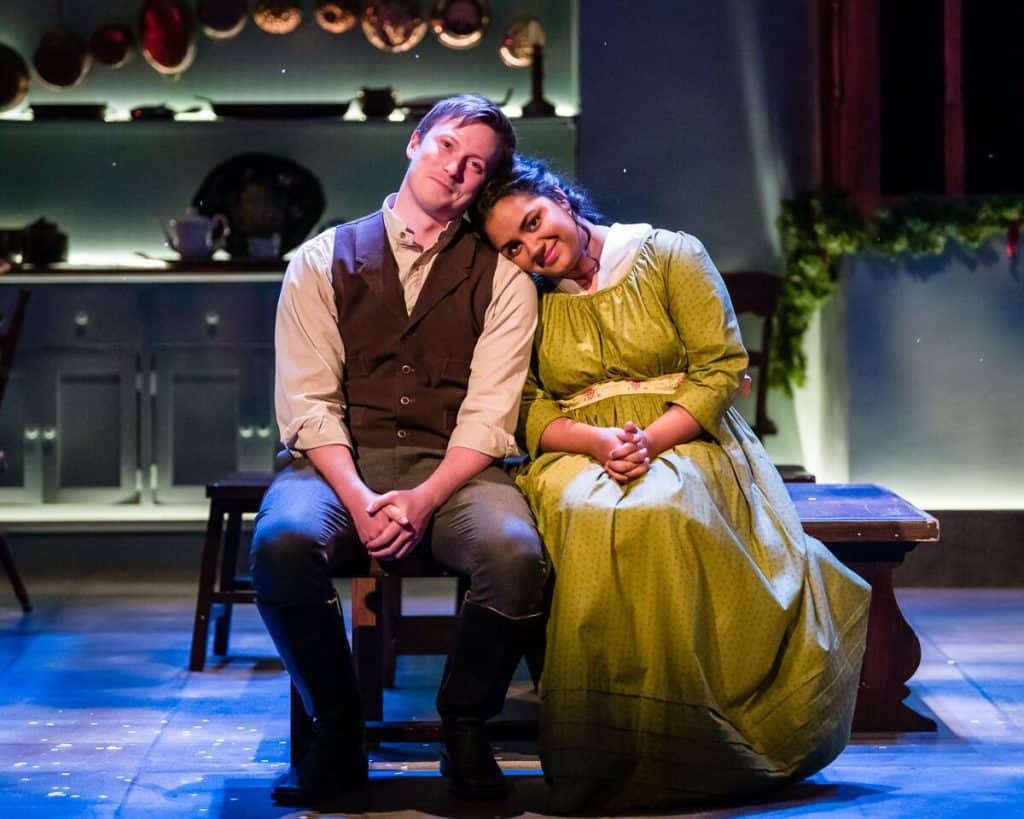 Jesse Lavercombe as Brian and Roshni Desai as Cassie in The Wickhams at the Junlge Theater, through Dec. 30, 2018.
Photo by Rich Ryan

All the actors bring energy and personality to their iconic characters. Angela Timberman (always a favorite) shines as Mrs. Reynolds, tying to keep the household running ship-shape while being challenged with her loyalties. She really knows how to deliver a funny or poignant line. James Rodriguez and Sun Mee Chomet revive their roles as Mr. Fitzwilliam and Elizabeth Darcy. They’re cute, and meddling, but also seek the truth. They play well off each other. Roshni Desai comes in as a new character Cassie, a new lady’s maid. She isn’t interested in anyone’s advances and is fed up with being taken advantage of. She’s building her own career her way. She has much work to do to be strong and independent in this world. Jesse Lavercombe plays Brian, the male servant who seems to have many duties. Brian can be charming, or a jerk, depending on the situation. And, then we have George Wickham, played with great charm, slime, and charisma by Nate Cheeseman. He is the player who sweeps young Lydia off her feet and whisks her away from her family.

Kelsey Didion as Lydia was the shining star of last year’s Christmas at Pemberley. The writers wanted to give her more story and a chance to grow up. She was young and foolish and easily manipulated by Wickham when she ran off and married him. When she returns to Pemberley for Christmas, she spends much time trying to convince everyone that she is happy and well. The truth is revealed as Wickham shows his true colors, and the women find their voices. 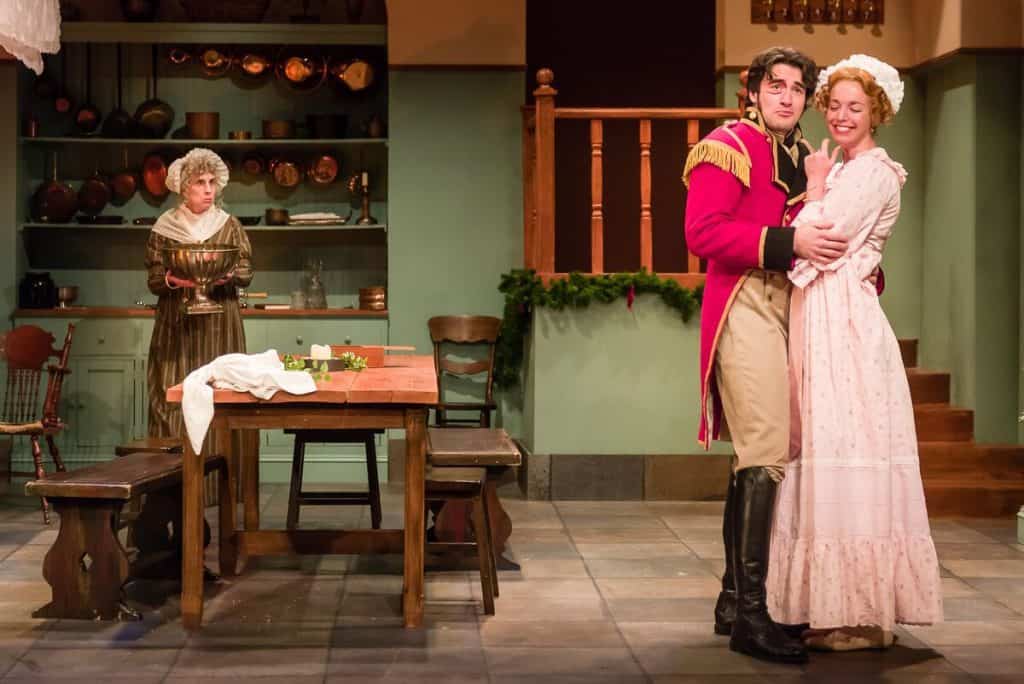 Angela Timberman as Mrs. Reynolds, Nate Cheeseman as George Wickham, and Kelsey Didion as Lydia Wickham in The Wickhams at the Jungle Theater.
Photo by Rich Ryan

This is a lovely modern play set in Victorian England. Fans of Austen will appreciate seeing more of the characters and expanding on their story. The set, staging, lighting, and of course the darling costumes are are wonderful. I especially liked the shadow circles at the beginning of the play. You can see The Wickhams: Christmas at Pemberley at the Jungle Theater in Minneapolis, MN through December 30, 2018.

Journaling Prompt: Do you like spin-offs from your favorite stories, in particular, the classics? 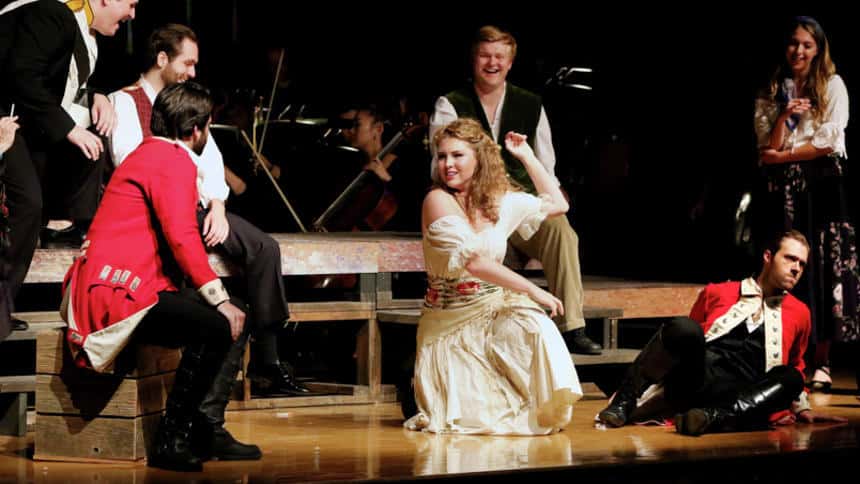 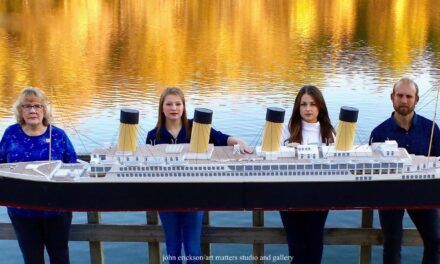 X is for X by Sue Grafton