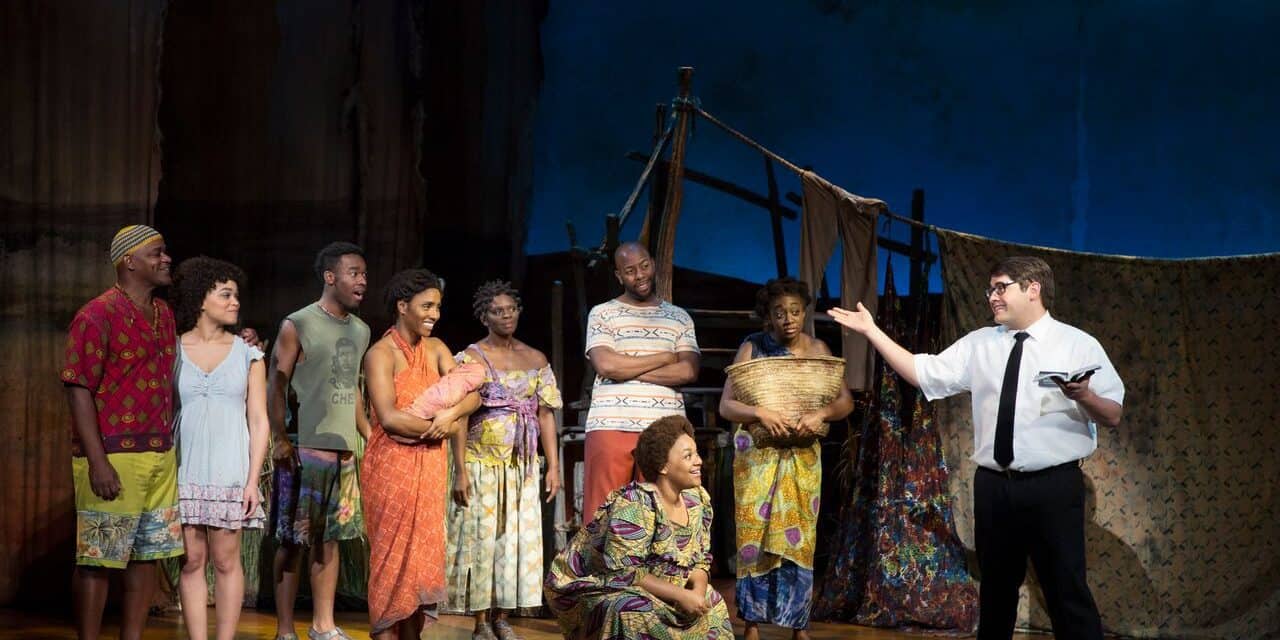 Quote of the Day: Watching “Book of Mormon” with you is about as uncomfortable as watching “The Hangover” with Dad. My young adult son Bobby who was my date for the Book of Mormon media night at Hennepin Theatre Trust, the Orpheum, in Minneapolis, MN. We both knew, pretty well, what we were getting ourselves into. He said, “I’ve watched South Park.” I am not a South Park fan, but I am a huge fan of live theater, especially when it has original writing and music. I also wanted to know what all the hoopla was about.

Trey Parker, Matt Stone, and Robert Lopez wrote the book, lyrics, and music for The Book of Mormon. It first appeared on Broadway in March of 2011, and is still playing there. You can also see it London, Melborne, and various Scandinavian countries, as well as on tour throughout North America. This is The Book of Mormon’s fourth stop in Minneapolis, “back by popular demand.” It’s vulgar, offensive, irreverent, shocking, and full of humor. While it is extremely uncomfortable to listen to some of those lyrics sitting next to your kid, or your mom, and watch the bawdy scenes, it is also entertaining. The house was alive with enthusiasm. Many laughs, hoots, and cheers for the performers, their solos, and antics. The Book of Mormon is ridiculously funny. 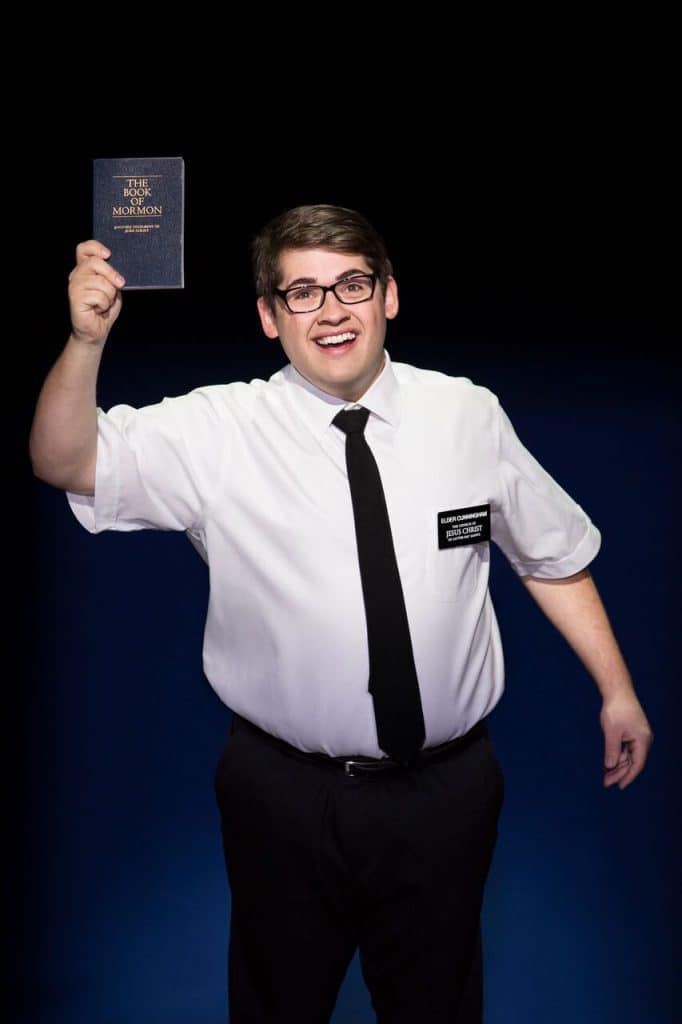 Conner Peirson as Elder Cunningham in The Book of Mormon, National Tour, Photo by Julieta Cervantes

The musical is a satire on organized religion, mission work, and specifically the Mission experience that young adult males are obligated to do as they mature in the Mormon faith. In this play, Elder Price (Kevin Clay) and Elder Cunningham (Conner Peirson) are thrust together and sent to Africa to spread the word. Their main goal seems to be to convert the people of Uganda to Mormonism and tally up the Baptisms. They get a douse of reality as they’re faced with robbery, poverty, famine, drought, Gorilla warfare, the spread of AIDS, and terrorism. Of course, it is ridiculous to imply that converting to Mormonism, or any religion, is going to save them from these awful things, and the villagers have a song to demonstrate just what they think of a god who could allow them to happen. Truthfully, most of us have had similar thoughts when life’s trials get overwhelming. 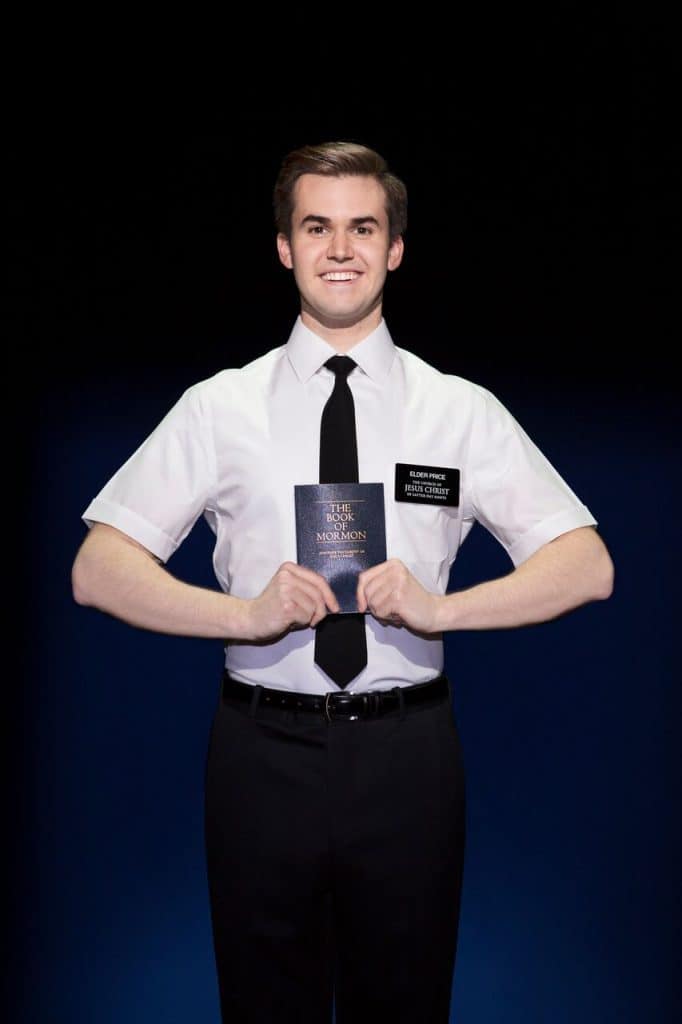 Kevin Clay as Elder Price in The Book of Mormon, National Tour, Photo by Julieta Cervantes

Elder Price, who has always tried to do the right thing, begins to realize that reading scriptures from the Book of Mormon may not be what these people need. Elder Cunningham, who has never had much self-confidence, or friends, comes up with a slightly different translation of the word. Both Clay and Peirson give outstanding performances, and Kayla Pecchioni is wonderful as Nabulungi. The show has high energy, great choreography, outrageous staging and costuming, much shock value, and gives us a few things to ponder.

The Book of Mormon is the winner of nine Tony Awards including Best Musical, Best Book, Best Original Score, and Best Direction. The original cast recording of The Book of Mormon won the 2011 Grammy Award for Best Musical Theater Album. It has numerous awards and is highly popular, but it’s not for everyone. It has extremely foul language, explicit sexual images, and basically tells God, missionaries, and organized religion to eff-off.

You can see The Book of Mormon at the Orpheum Theater in Minneapolis, MN through November 18, 2018, or check out the National Tour dates for a performance in a city near you. There will be a $25 pre-show lottery before each performance. Check website for details.

Journaling Prompt: When have you been uncomfortable and entertained at the same time?

R is for Redemption