Quote of the Day: I want to do something splendid…something heroic or wonderful that won’t be forgotten after I’m dead. I don’t know what, but I’m on the watch for it and mean to astonish you all someday. Louisa May Alcott (Little Women, Jo)

I am a huge fan of Louisa May Alcott. I’ve read Little Women at least three times. The first time in my junior high years, and went on to read more of her books. It wasn’t until sometime in my adult life that I discovered A Long Fatal Love Chase, a thriller novel much different than her sweet stories of the March sisters. The character Jo, so much like the author herself, longs to be her true self, to write the stories that move and excite her, and above all to have the freedoms, support, and successes that only men were allowed to have. “I’m not a woman like other women,” says Jo. She doesn’t want a domestic life, to be someone’s wife or mother. She wants to write, to create stories and have them published, to live independently and have her words live on. Jo is the hero for so many of us writers, and for many young women who long for their voices to be heard.

The Jungle Theater in Minneapolis wanted to do Little Women, but with a fresh voice. They commissioned Kate Hamill to write a new adaptation. She brought the spirit of the novel and the March sisters to life in a beautiful and modern way. She brings out Jo’s longing to be heard and accepted as a writer. She shows us Beth in her sweet, quiet ways that she is the strongest and bravest one of all. The relationship of the sisters is a tight bond, and the best days were when they were all together under one roof, acting out Jo’s plays, dreaming of their futures, and taking care of each other. Little girls grow up, become women, fall in love, marry, and make new homes. Jo doesn’t want any of that. But, you can’t stop time. 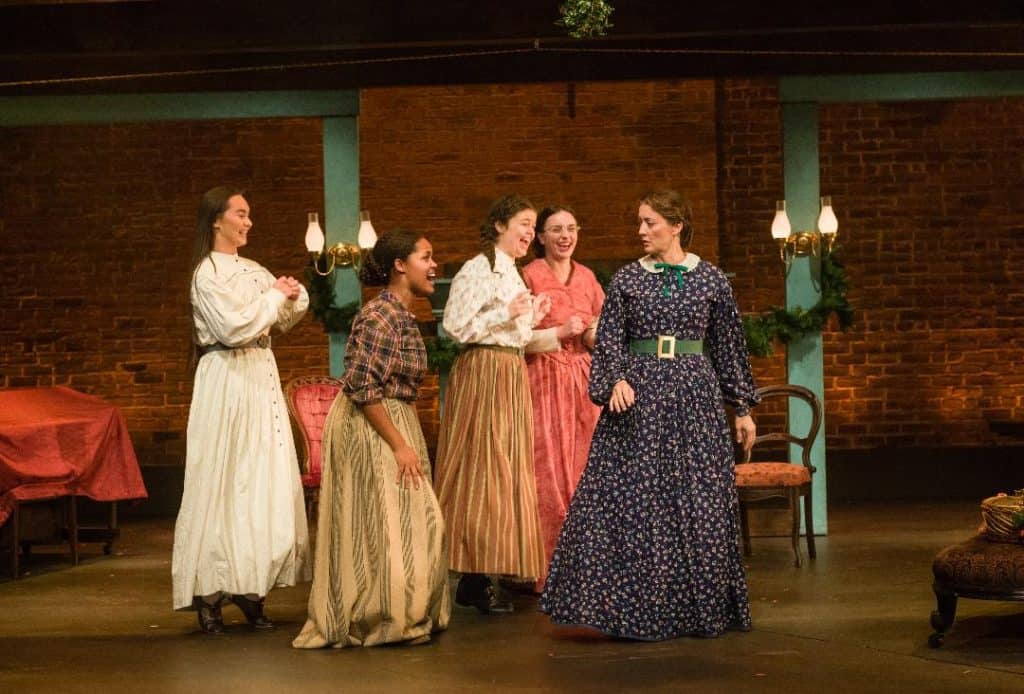 Sarah Rasmussen directs this endearing story and gives it new life. The set, designed by Chelsea M. Warren, is simple and fluid. I loved the quilted pattern “curtains” in the back, the ease at which the set could become the attic where they staged the plays, to the ballroom where Meg first meets John Brooks. The stage revolves and actors move set pieces around as necessary. Robert Elhai composed original music to compliment this story with Tyson Forbes on violin taking center stage at times to set the mood or help make the scene transitions go smoothly. The costumes, designed by Rebecca Bernstein, fit with the period and also give each character distinction.

C. Michael Menge is a fierce Jo March with powerful emotions and delivery of this iconic character. Christina Baldwin is darling as Marmie. Christine Weber plays the sensible oldest sister Meg. Megan Burns gives Amy, the baby of the family, all her romantic notions and spoiled little sister tantrums. Isabella Star Lablanc is a wonderful Beth, quiet, shy, yet determined and bold when she needs to be. Michael Hanna plays the lonely next door neighbor “Laurie” who longs to be part of the March family, and eventually marry into it. James Rodriguez is the scholarly and kind Mr. Brooks. Wendy Lehr expertly shifts between three roles including the cranky Aunt March. And, Jim Lichtscheidl is the stern Mr. Laurence and Mr. Dashwood. This is an excellent cast that really shines and carries the emotional connection and portrays the joys and sorrows of the March family and the people who love them.

You can see this new adaptation of Little Women at the Jungle Theater in Minneapolis, MN through October 21, 2018.

Journaling Prompt: When you think of your family, who is the leader, peace-maker, worker, organizer, or one that marches to her own beat? What roles do each seem to take, even once you’ve all grown up?

I Left my Bra in Omaha