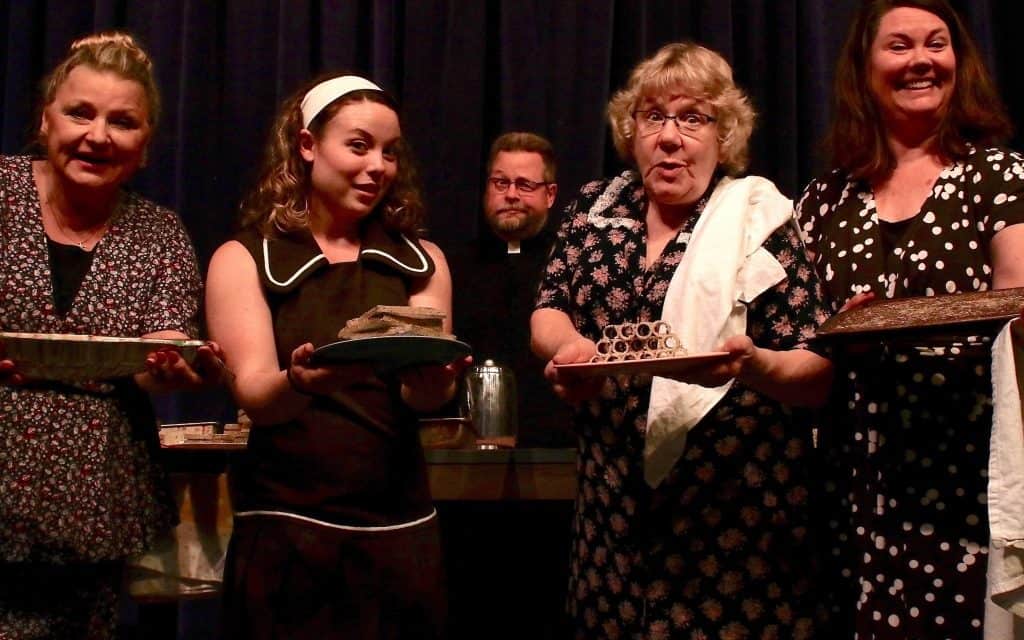 Quote of the Day: Everything happens in the church basement! Lyrics from the musical Church Basement Ladies. I am playing the part of Karin Engelson, the mother of the bride, and second in command of the East Cornucopia Lutheran Church. It’s a blast. I haven’t done anything on stage in the Brainerd lakes area, and haven’t been on stage in several years, so this was both a challenge and a boost of adrenaline to be part of this show. Local director and high school English teacher Karla Johnson offered to provide a review of the show. Thank you, Karla!

Walking into the Chalberg Theatre on Thursday, July 19, I had no prior knowledge of any content or the music in Church Basement Ladies. As the house lights dimmed, and the opening dialogue consisted of the amount of butter that was needed to make lutefisk in the basement of a Lutheran Church, I knew that this was going to be a gut-busting show.

If you have any connections to Minnesota, you must see the hilarious musical Church Basement Ladies at CLC this week! The opening night performance had a sold out crowd, something that tends to be rare during the busy summer months in the Brainerd Lakes Area, so reserve your tickets ahead of time.

Church Basement Ladies is based off the books of Janet Letnes Martin and Suzann Nelson. The script was written by Jim Stowell and Jessica Zuehlke. Music and lyrics by Drew Jansen.

The action takes place during the 1960s in a basement kitchen of the East Cornucopia Lutheran Church in Cornucopia, Minnesota, and the show consists of the inner workings of four women who have control over the kitchen, and the Pastor, played by Erik Paulson, who finds the kitchen his personal sanctuary to escape his everyday responsibilities and stresses as the Pastor of this Lutheran church. 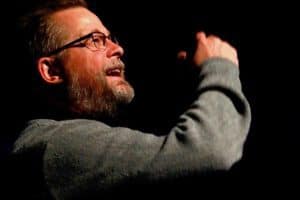 Act One begins in December 1964, and the show ends in July, 1968. It is clear from the beginning of the show that all of the characters have known each other for many years. The actors did a phenomenal job portraying the ups-and-downs of working closely with each other in a small basement.

Throughout the musical, there is a funeral, references to the Pastor’s new wife (who is from the scandalous Cities), an older woman who has hot flashes, a college-aged student who is trying to find her place in life, the strict senior supervisor of the kitchen who comes to realize it is time for her to pass on her baton, preparing for an Easter celebration, and a wedding, with a bride who has cold feet.

There is a huge distinction between the old and the young in this musical. Vivian, who is played by Sharon Hartley, has a difficult time dealing with change in the church, even changes as small as changing the colors of the covers on the hymn books. Miss Signe Engelson who is the youngest character in this show, played by Nicole Rothleutner, has many coming-of-age moments in this musical, showing the struggles and happy times of a young woman in the 60s.

The musical numbers are outstanding, and the vocal director, Kate Davis, did a wonderful job. One of my favorite numbers was “The Cities,” which the women sing about the devious temptations in Minneapolis and Saint Paul, Minnesota. Nicole Rothleutner has a gorgeous voice, and every time she sang, the audience was engrossed in her angelic voice. I would also like to note what a pleasure it was to see Mary Aalgaard shine onstage in her debut at BCT as Karin.

The director, Amy Borash, did a remarkable job portraying the nuances and intricate details of this musical. Borash has been directing for almost twenty years, while having another full-time job as well, which is astonishing! Not only did Borash direct the musical, but she also did the choreography for the musical numbers. Directing a musical takes an outrageous amount of time and energy, and Amy Borash put on a phenomenal production.

Tim Leagjeld’s set was extremely convincing as a Lutheran Church basement, even including a picture of the Last Supper and the famous painting of a man praying before dinner.

Often times, the tech crew members are overlooked in theatrical reviews, and I find that egregious. If the lighting or sound is off, it throws off the entire scene, so I want to be sure to include the inner workings of the genius technical director George Marsolek, the lighting designer, Ben Kent, the four incredible stagehands, the three operators of the light board, sound board, and spotlight operator, and Travis Chaput, who made his debut as stage manager for this production.

Naturally, there are an exorbitant amount of Midwestern references, and jokes between Catholics and Lutherans, but there are also many elements of physical comedy in this production. The character Mavis, played by Barb McColgan, stole the show in my opinion, as she was fanning herself in the cooler and unbuttoning the top part of her dress to find some relief from her unbearable hot flashes. This is just one of the many entertaining moments in the show.

There are three more performances of Church Basement Ladies at CLC, and if you have not seen it yet, you must see it July 25-27 at 7:30 p.m. Be sure to reserve your tickets ahead of time because I am sure there will be more sold out performances! Trust me, you do not want to miss this.

D is for Discrimination