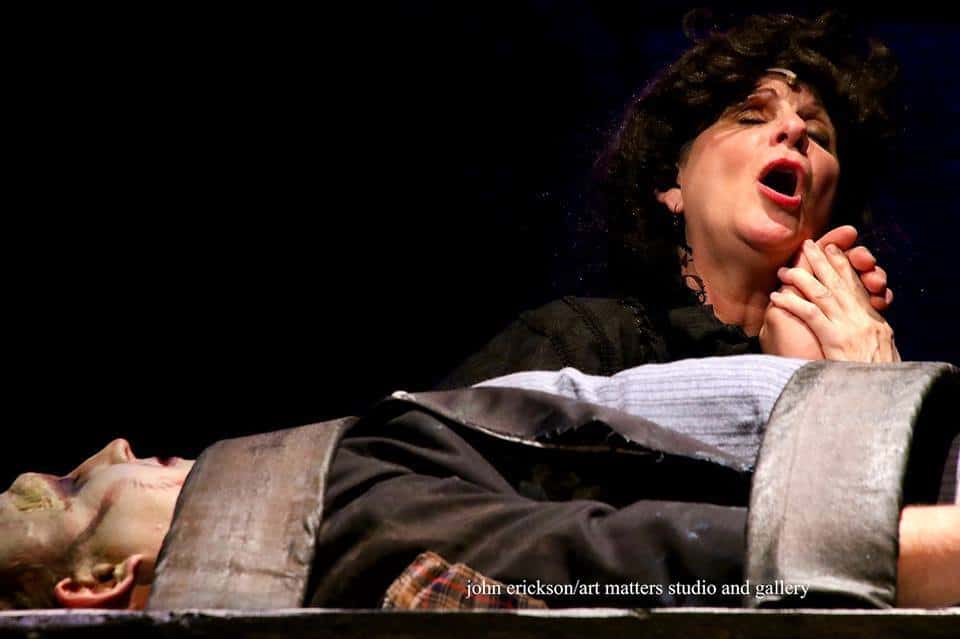 Quote of the Day: It’s pronounced “Fronkensteen.” Frederick Frankenstein, as he’s trying to deny his heritage in Mel Brooks’ bawdy comedy Young Frankenstein. You know the 1974 movie. You might have heard of the musical stage adaptation, also by Brooks, and now you can see it in the Brainerd Community Theater on the Chalberg Stage at Central Lakes College (CLC). 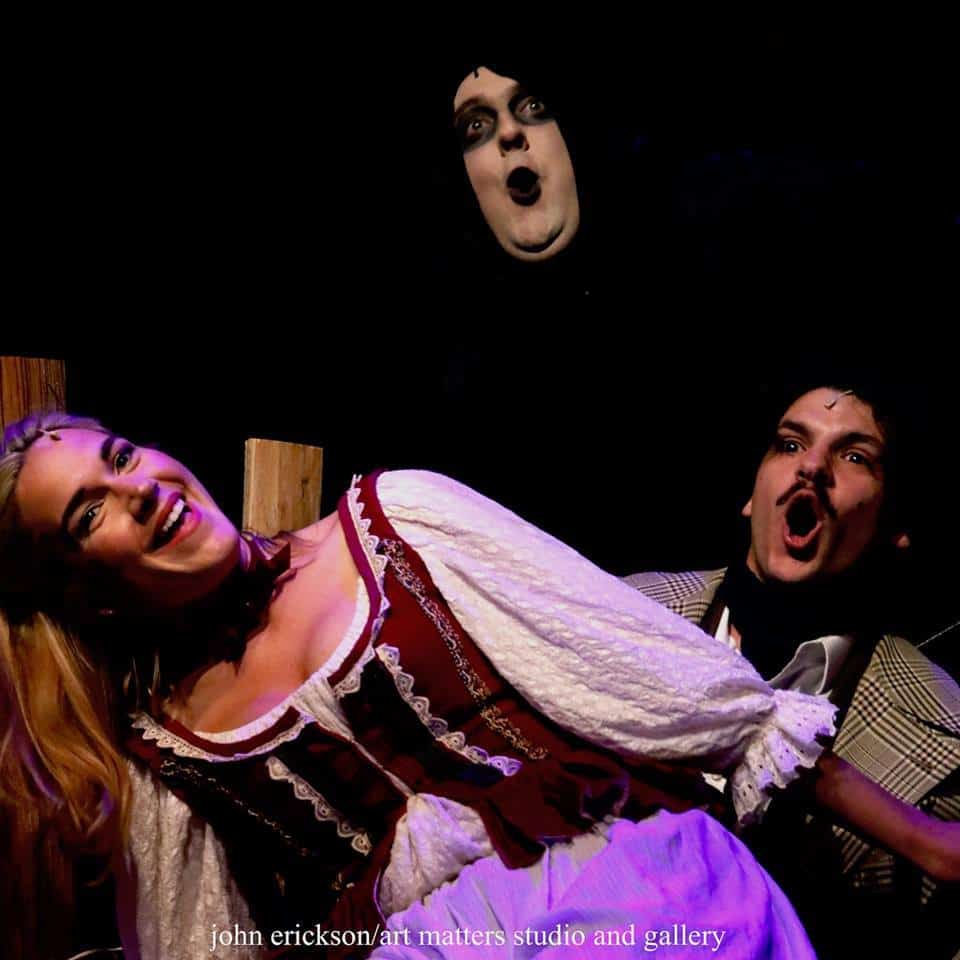 Brainerd Community Theater (BCT) at CLC has produced a delightful rendition of the famous cult classic Young Frankenstein, the musical. The plot follows the famous Mel Brooks’ movie, minus a few outdoor scenes that work best for movies, and plus music! It’s a hoot. You have all the giggles and blushes that came from Mel Brooks’ creative writing presented with fun enthusiasm from your friends and neighbors. I smiled through most of the show.

Nicholas Kory nails it as Frederick Frankenstein who wants to be known as a serious scientist, until he learns that he has inherited the creepy old castle in Transylvania and his grandfather’s books and laboratory. (That’s pronounced lab-bore-a-tory, with a mix of British and Romanian accent.) 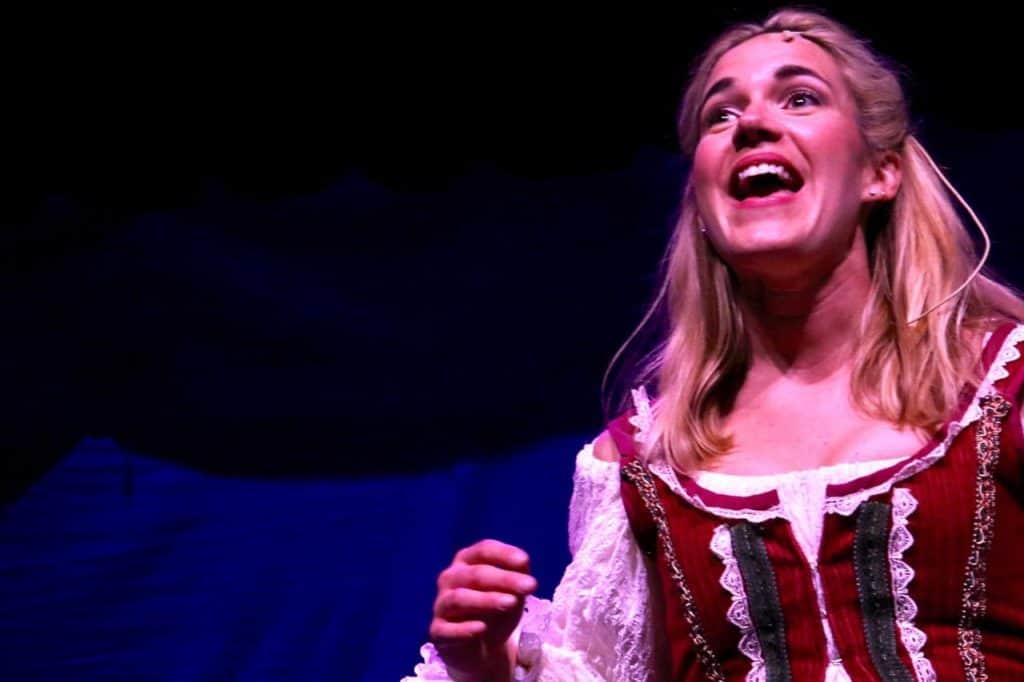 Sadie Wonder plays the ditzy and lusty Inga. Everything about her fits this part to a T. She has the look, and the gorgeous costume, and the voice that makes Inga a character you love to watch. She’s funny, musical, and a true delight on stage. 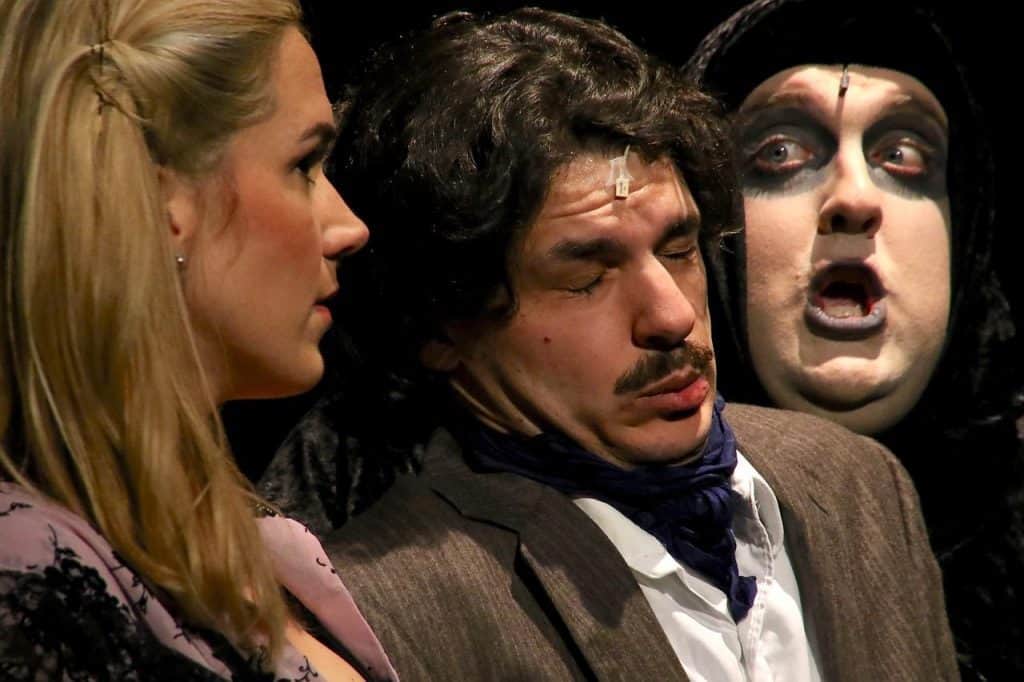 Travis Chaput as Igor was one of my favorites. Travis is great in every role he plays, and his portrayal of Igor kept me giggling and shaking my head. His make-up job was spooktacular, and his costume great for the roaming hump! Make-up creds go to Rachael Kline who also played Elizabeth. She’s funny and bright and full of sexual energy. 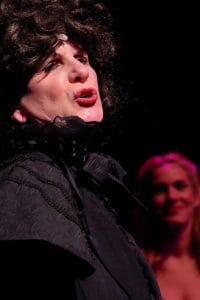 The most outstanding performance goes to Rebecca Timmins who plays Frau Blucher. She writes in her bio that she is a newcomer to the area. It was as if she were plucked off the silver screen and dropped onto the Chalberg stage at CLC. She is truly fantastic as the Frau. Thank you for lending us your amazing talents, Rebecca!

The standing ovation goes to all the folks behind the scenes. The set, by Curtis Phillips, Tim Leagjeld, and likely many more hands was impressive. I sat in the front and could see all the attention to detail, not to mention all the moving parts and need for scene changes. Bravo!

The costumes, by Dawn Marks, were outstanding. Again, so much detail, from bright colors, to creepy mutations, especially on the Monster, delightfully played by Jesse Brutscher.

A production of Young Frankenstein wouldn’t work without the complex lighting and sound, designed by Ben Kent. All the cues were spot on! And, the technical direction by George Marsolek.

Choreographers Stephanie White and Kate Davis did an amazing job. Some members of the audience even gave a standing ovation after the iconic song “Puttin’ on the Ritz.” The ensemble did a great job. They were all terrific and fun to watch.

The band was fantastic, directed by Steve Anderson, vocal direction by Sarah Aamot. You can’t see them. They’re in the back behind the screen, so at first I thought they might be a recording. It was delightful to hear the live music and know that long time music director at CLC, Steve Anderson, was going out with a bang. He’ll be retiring this year. He will be missed!

Bravo to Director Patrick Spradlin, cast and crew, you all put on a spectacular show. Young Frankenstein (that’s Fronkensteen) will be on stage at the Chalberg Theater at CLC through May 5, 2018. For tickets, please visit their website, call 218-855-8199, or come early and buy them at the box office, which opens an hour before each performance. The house was nearly full on opening night, and tickets for the remaining shows are going fast!

Journaling Prompt: Are you a Mel Brooks fan? What’s your favorite movie, or movie monster?

Review of Juno and the Paycock at The Guthrie Theater

M is for Money