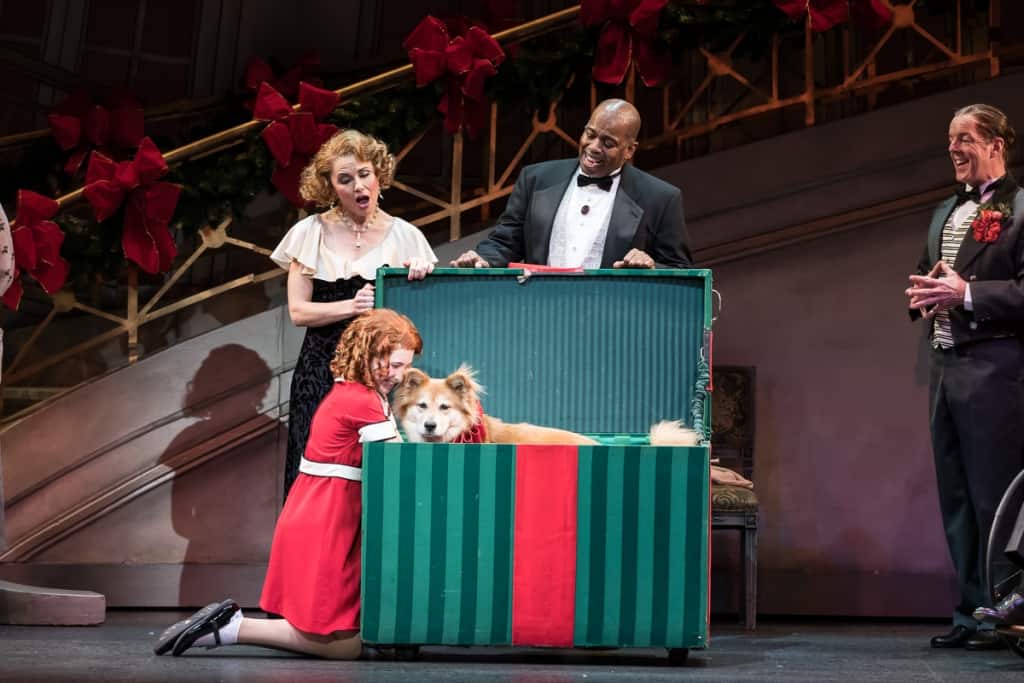 Quote of the Day: Why any kid would want to be an orphan is beyond me. Miss Hannigan in the musical Annie, book by Thomas Meehan, music by Charles Strouse, lyrics by Martin Charnin, based on the comic strip Little Orphan Annie by Harold Gray which debuted in the New York Daily News on August 5, 1924. The little redhead with unwavering hope has been charming readers and audience members for decades. The stage musical debuted in 1976, a movie starring Carol Burnett as Miss Hannigan came out in 1982, and a remake with a much more diverse cast happened in 2014. This performance produced by the Ordway Performing Arts in St. Paul, MN is both the classic story with a diverse cast, and full of heart. I’ve lived by these words for as long as I can remember, “When I’m stuck with a day that’s gray and ordinary, I just stick up my chin and grin and say…The sun will come out tomorrow!” 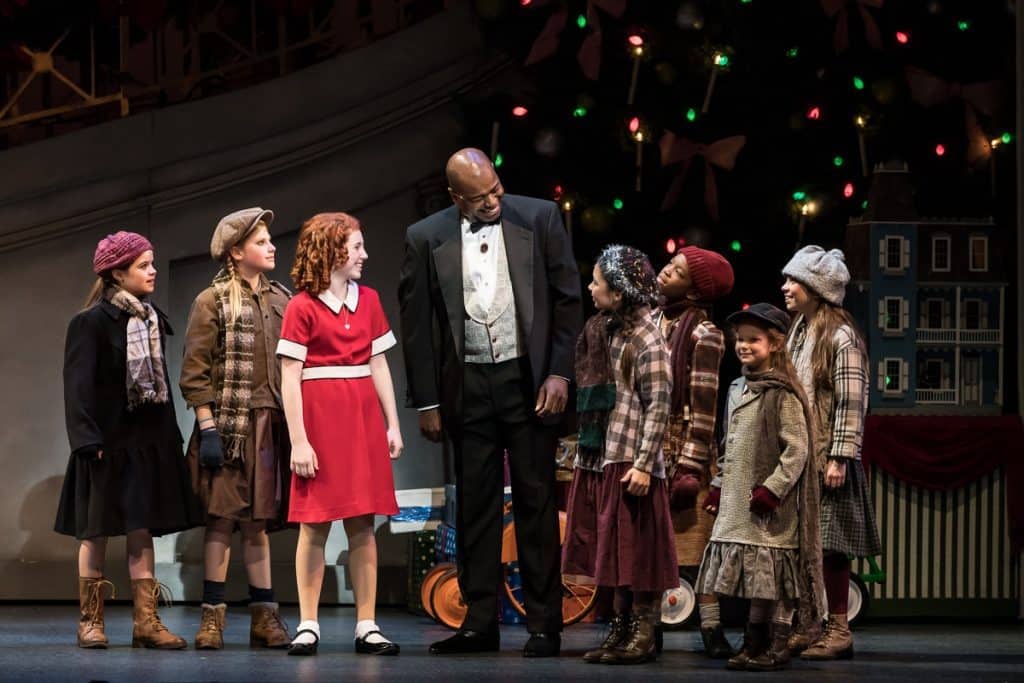 Lance Roberts as Daddy Warbucks, Carly Gendell as Annie, and the “Little Girls” in Annie at the Ordway in St. Paul, MN through Dec. 31, 2017. Photo by Rich Ryan

Annie is a musical filled with hope, promises of a brighter Tomorrow, talented and endearing orphan girls, and tunes that you keep singing long after you’ve turned out the lights on your lovely theater day. It was so fun to stand in the entrance of The Ordway on Friday night and watch all the little girls, and boys, walking into the theater with their parents, grandparents, and other grown-ups. We saw lots of frilly dresses and big grins, and everyone seemed filled with excitement. The Ordway was decorated beautifully with plenty of photo opp spots, live music on the 2nd floor lobby, and even a sprinkling of snow outside glimmering in the festive lights.

The cast of Annie is oh-so wonderful. Carly Gendell comes to us, already a well-seasoned musical theater actor, playing the title character. The way she interacted with Sandy the dog (played by Marti, a rescue dog herself), brought smiles and cheers to the audience. Check out this video about trainer William Berloni who rescues and trains animals for stage and film. That story alone will knock the Scrooge out of you! Carly is skilled and smooth, has great interplay with the other actors, and a dramatic and full voice to belt out those favorite songs. The ensemble of “Little Girls” were darling, and we were especially charmed by the littlest one. 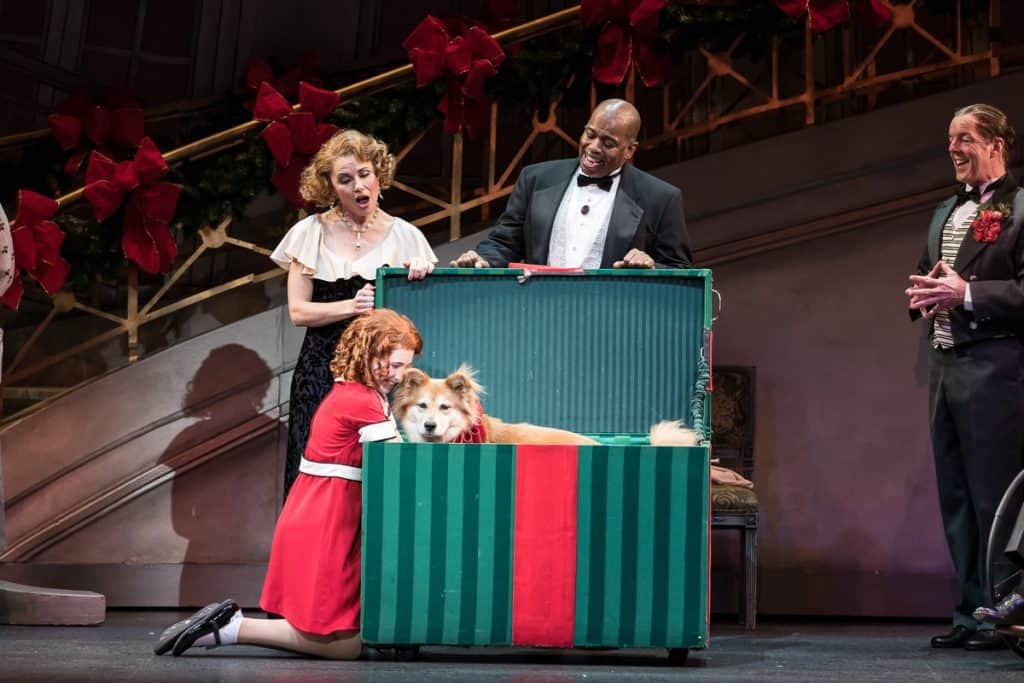 Carly Gendell as Annie, Ann Michels as Grace, Lance Roberts as Daddy Warbucks, and Marti as Sandy in the Ordway’s production of Annie. Photo by Rich Ryan.

Ann Michels is a delightful Grace, and has the loveliest costumes. Lance Roberts is a gruff, but kindly, Daddy Warbucks who is quickly charmed by Annie and her spirit of optimism. Michele Ragusa plays the hateful Miss Hannigan so well that you love to hate her while tapping your toes to her awesome songs. When she and Cat Brindisi (Lily) and Britton Smith (Rooster) do their jazzy trio of Easy Street, I wanted to hit replay and watch it over and over again! In fact, that was the song that ran through my mind on the drive home, and as I closed my eyes and drifted off to sleep that night. 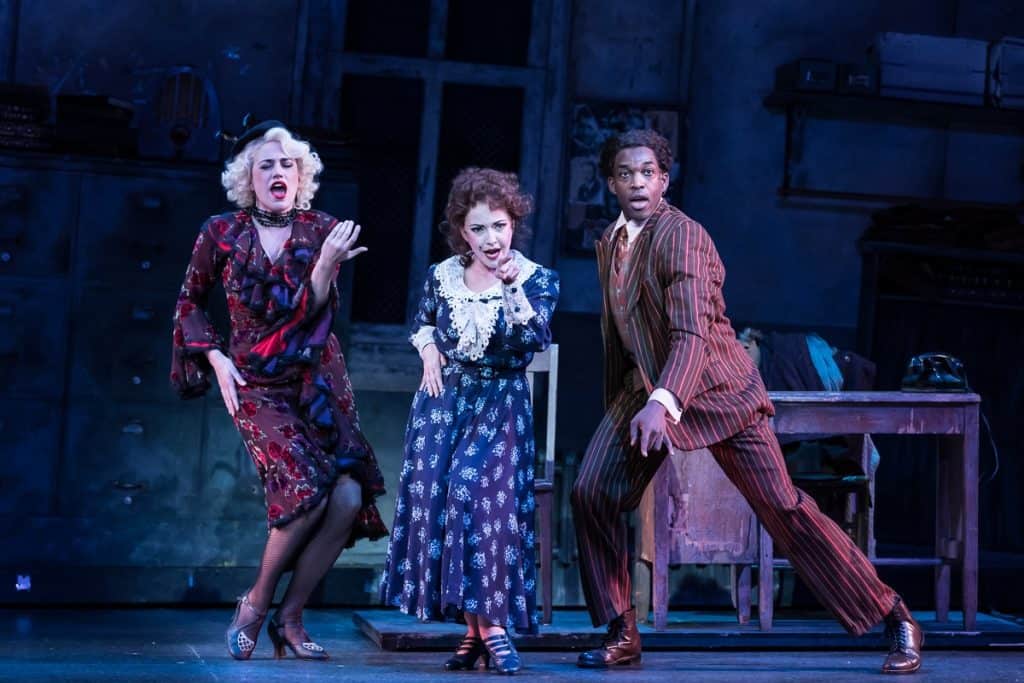 Cat Brindisi as Lily, Michele Ragusa as Miss Hannigan, and Britton Smith as Rooster in the Ordway’s production of Annie, playing through Dec. 31, 2017. Photo by Rich Ryan.

Austene Van expertly directs this large cast of some of the Twin Cities Theaters’ finest actors, and a few from out of town, who all shine in this classic musical. The set was absolutely gorgeous. The costumes were lovely. The Orchestra, directed by Jeff Rizzo, was excellent. While this is a show about a little girl, there was plenty for grown-ups as well. You tend to forget about numbers like “Hooverville” and “Cabinet Tomorrow” but they’re great songs, too, and add a little history in with your theater entertainment. 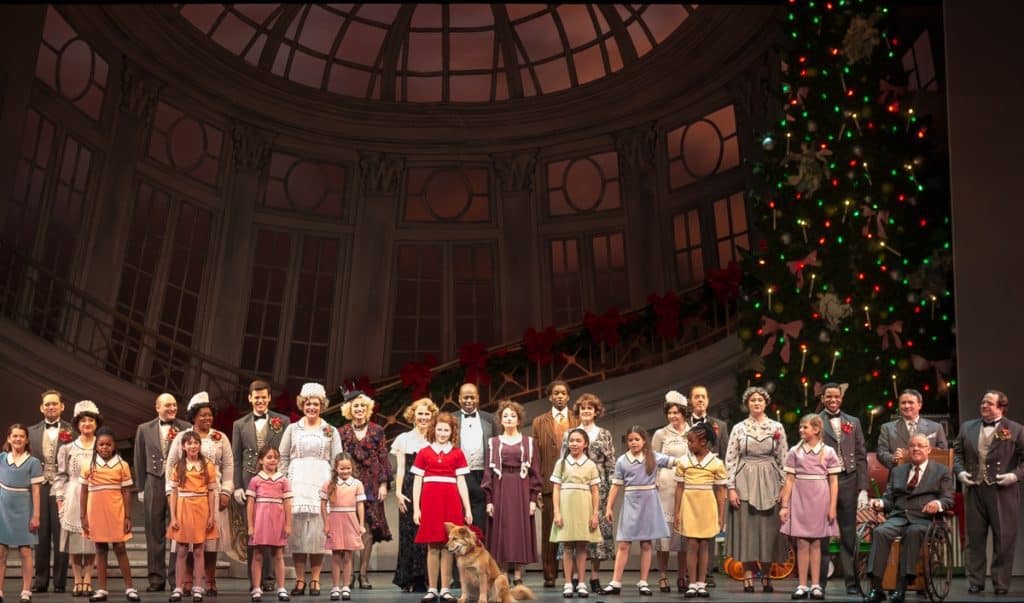 We are reminded, as well, that not everyone has a Daddy Warbucks waiting in the wings for children whose parents aren’t there for them. While we don’t have orphanages anymore, we do still have the need for caring people to welcome children into their homes and lives. The Ordway has partnered with Ampersand Families to bring those people together. My take-away from this story has always been that families can be created by many different types of people, formed in new ways, with love at the center. Here’s hoping “the sun will come out tomorrow” for all children in need.

You can see Annie at the Ordway Performing Arts Center in St. Paul, MN through December 31, 2017.

Journaling Prompt: Do you know anyone who is adopted, has adopted or fostered a child, or been that kindly adult for a young person? 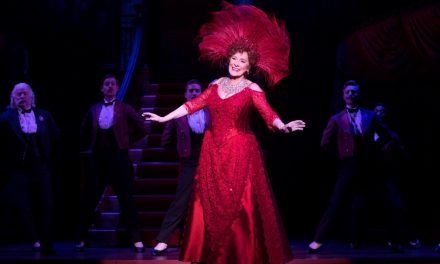 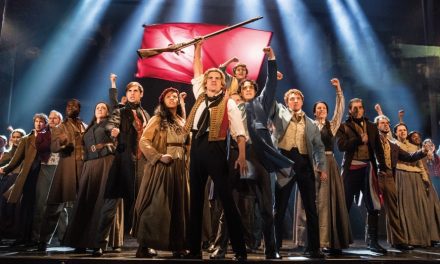 Review of Illusion Theater’s My Antonia