Review of The Grinch at Children’s Theatre Company, 2017 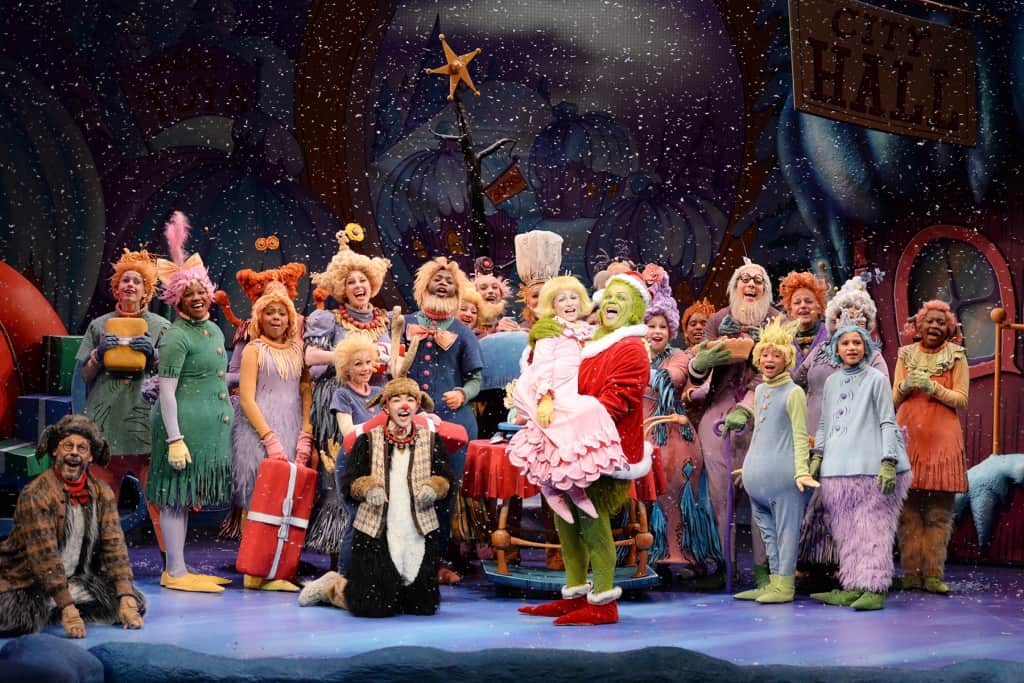 Quote of the Day: The Grinch hated Christmas! The whole Christmas season! 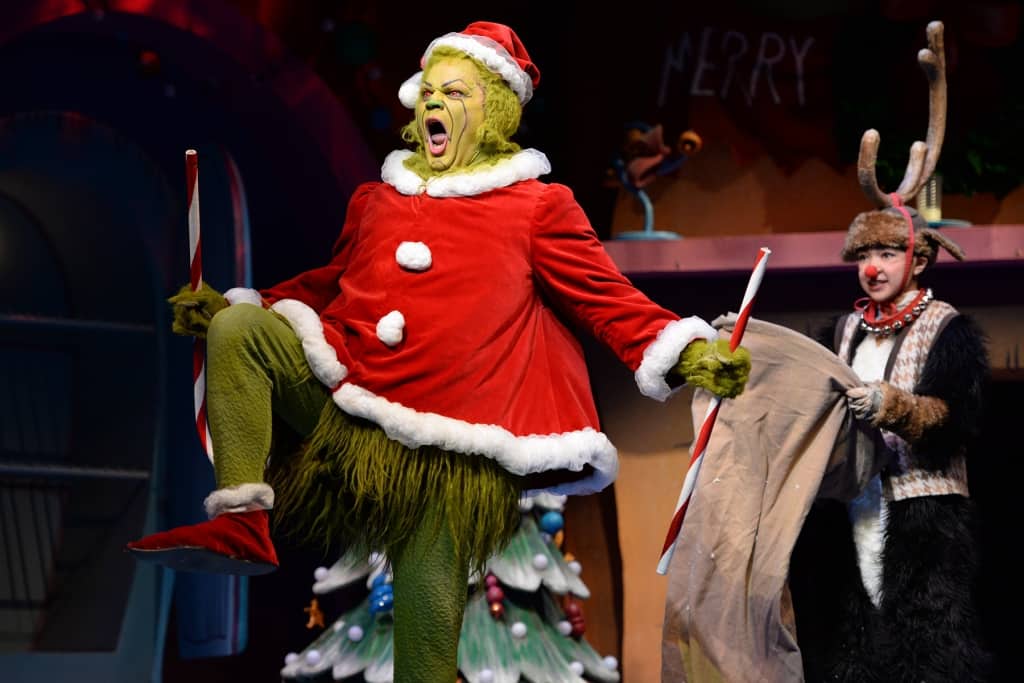 Natalie Tran as Young Max and Reed Sigmund as The Grinch in Dr. Seuss’s How the Grinch Stole Christmas photo by Kaitlin Randolph

Back by popular demand at The Children’s Theatre Company in Minneapolis, MN, is The Grinch! (even though he hates all that singing and the noise, noise, noise, noise!) Old Max the dog (Dean Holt) returns each night with his suitcase packed full of memories as he retells the story of how the Grinch tried to steal Christmas. How he went down to Whoville, disguised as the gift giver in red, with Max himself wearing antlers and pulling a sled. The Whos do seem to be infatuated with the whole Christmas thing, the shopping, the buying, the crowds, and the stuff, oh the STUFF! 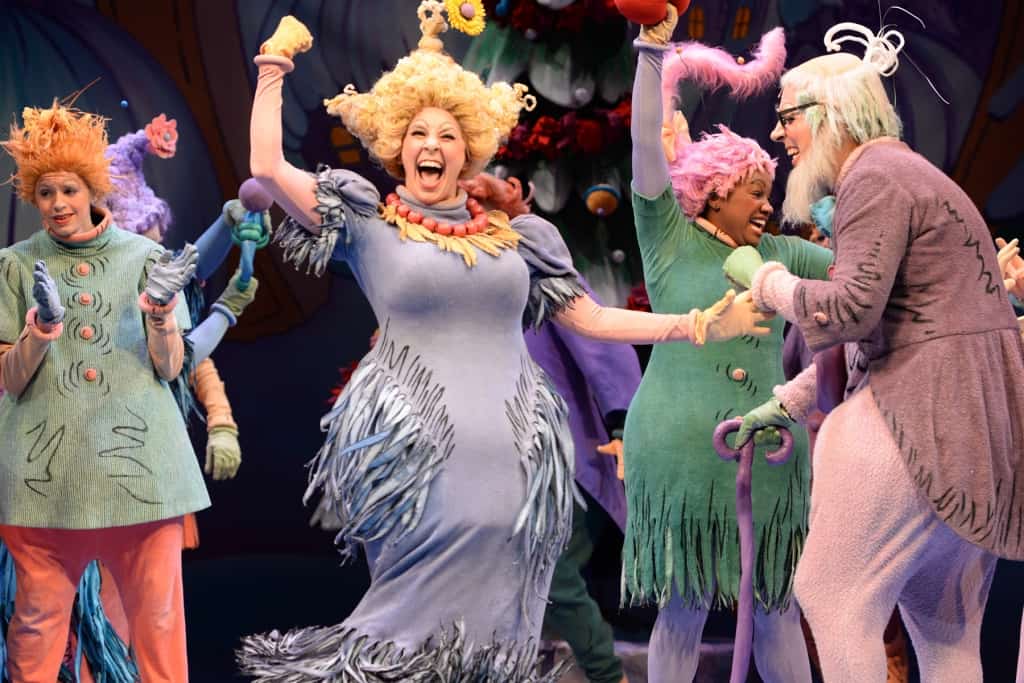 I brought my friend Joanna and her two kids to The Grinch with me at CTC. At first Henry (age 8) started to shrink in his seat, hanging onto his mom because he thought the Grinch might be too scary. Soon, he was giggling at the Whos, and cheering on Young Max, and watching all the magic on stage.

Reed Sigmund was born to play the Grinch. He has just enough cranky flair to show us how annoyed he is with the Whos and that whole Christmas thing, and just enough humor to make us giggle. Some of us can relate. Christmas and the whole crazy mess can get annoying. Henry said it best, “I can understand not liking all that noise.” 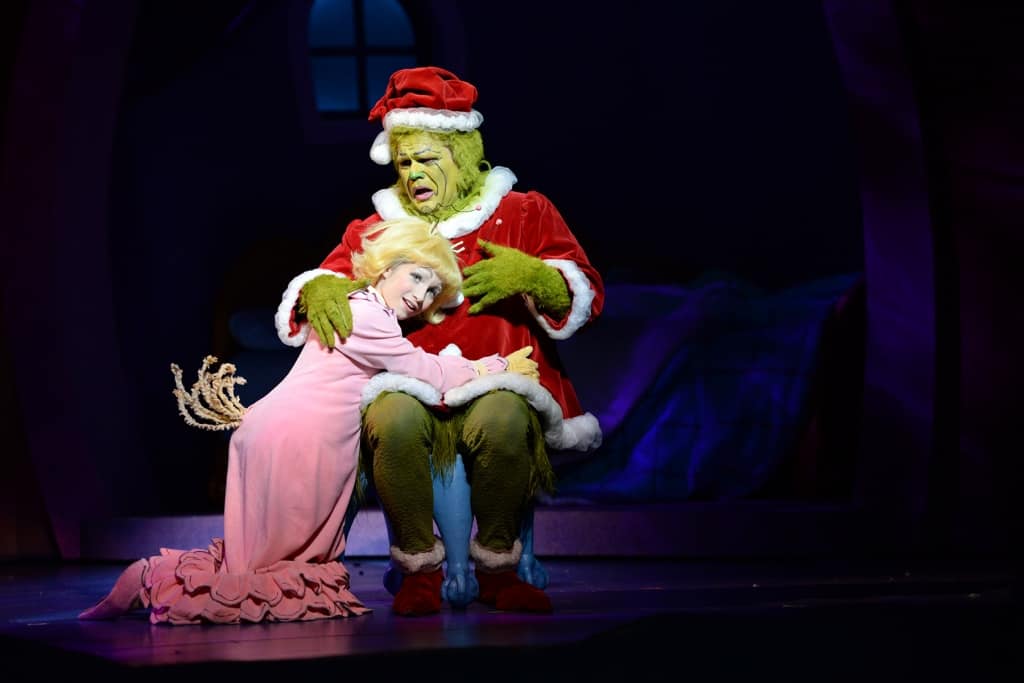 We see his transformation as his evil plot is foiled by a thirsty young girl with questions, and kindness. Never underestimate the power of a warm hug! When his heart grows three sizes, we see his softer side, and how he really just wants to be part of something. In the end, he didn’t like be one of a kind if it meant being all alone.

The Children’s Theatre Company of Minneapolis, and particularly director Peter C. Brosius, knows how to create the Christmas spirit. How the Grinch Stole Christmas at CTC sparkles with magic and love. The show has original music by Mel Marvin, books and lyrics by Timothy Mason. Victor Zupanc is the talented conductor. The music is wonderful, but it’s not the same as you hear in the animated version. They play “You’re a mean one, Mr. Grinch” as background music, which is fun, and Old Max sings a verse of it. The Whos have a new special song which is catchy and sweet. Choreography by Linda Talcott Lee is full of energy. The costumes are so amazing, you can’t take your eyes off of them. The Whos with their rounded shapes and boing-y hair crack me up.

You can see Dr. Seuss’s How The Grinch Stole Christmas! at the Children’s Theatre Company in Minneapolis, MN through January 7, 2018.

I saw the 2014 production of The Grinch with Natalie Tran as little Cindy-Lou Who. Now, she plays Young Max with all the energy of a young pup and all the heart of a Dr. Seuss character. I borrowed a bit of the summary from my 2014 post. This is a show worth seeing again and again.

The Odd Couple at Stage North in Brainerd, MN

I is for Interesting