Review of The Abominables at the Children’s Theatre in Minneapolis, MN 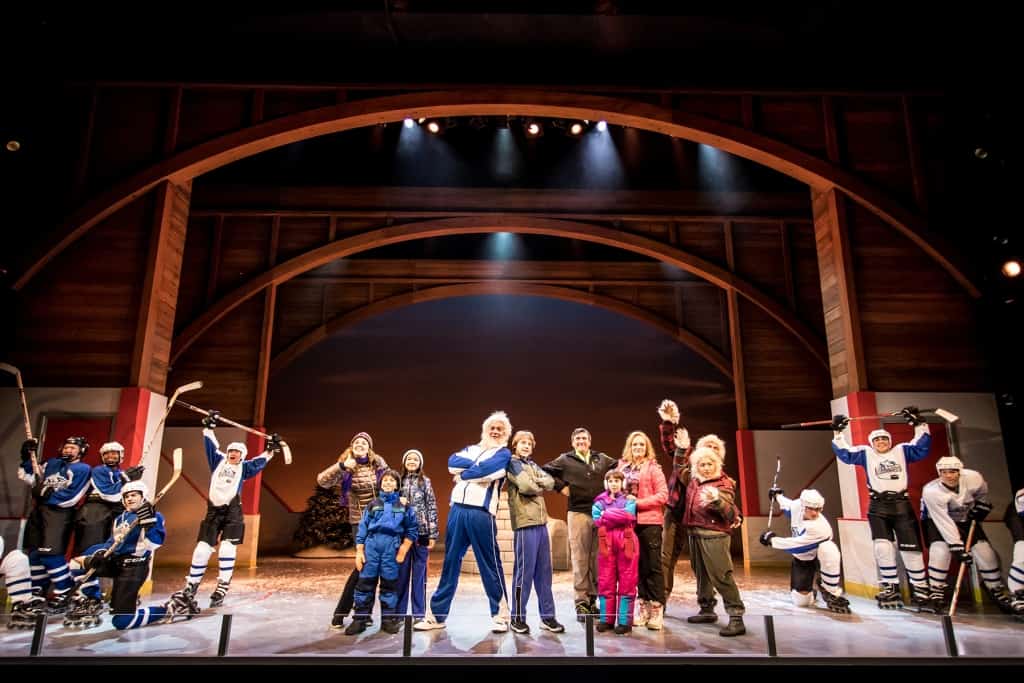 Quote of the Day: I want speed and excitement, and I want our players to go out there and have the times of their lives. We’re not going to be hanging around waiting for something to happen. We’re going to make things happen ourselves. Herb Brooks, MN Gophers hockey coach, 1972-1979, and Head Coach of US Hockey team in the 1980 Olympics, and more. 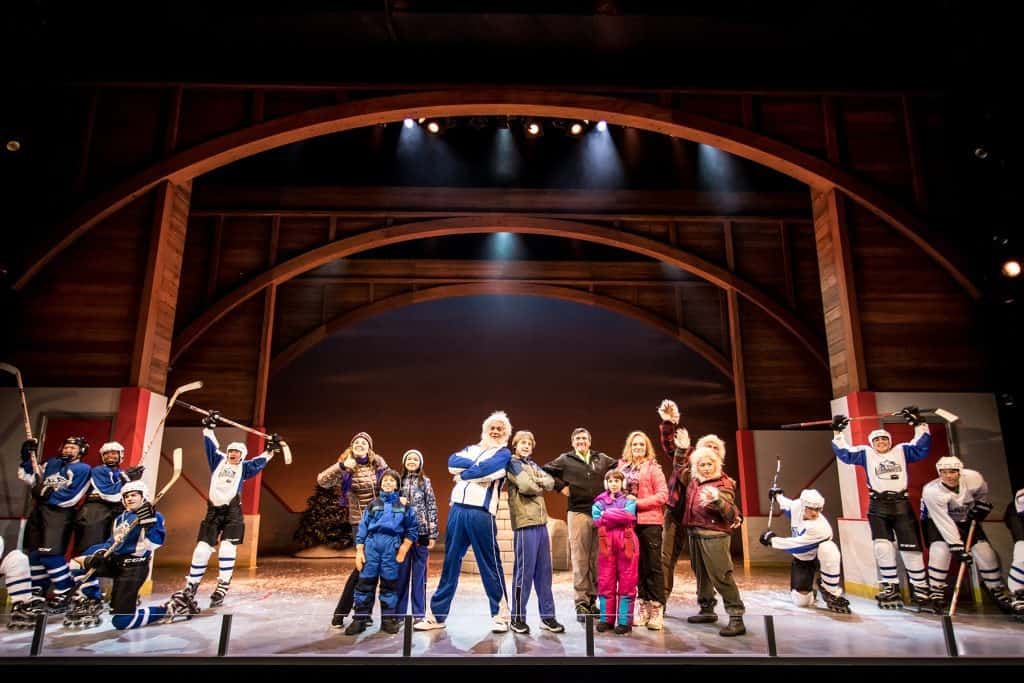 Ensemble The Abominables at CTC photo by Dan Norman

The Children’s Theatre Company in Minneapolis commissioned work with The Civilians to create a Minnesota Hockey Musical, a very appropriate subject for Minnesota families. Not all of us are hockey families, or even all members of the family are into hockey, but it is part of all our lives. The creators of the Abmoninables, Steve Cosson and Michael Friedman, did a great job of showing that. In fact, the opening number is Lily Munson (Valerie Wick), the little sister, singing about not liking hockey, instead she is a dancing princess.

The Munson’s are a family of five: the mom Ellen (Autumn Ness), the dad Charlie (Reed Sigmund), the oldest son Mitch (Henry Constable), the middle daughter Tracy (Natalie Tran), and the little sister Lily. The parents tend to focus more on Mitch who is vying for a spot on the A-Team. The team is their social network. Ellen goes out for mocha martinis with the other moms in between games, especially when they’re traveling. They all stay at the same hotels for tournaments, and go so far as to decorate the team member’s hotel room doors. Go Blizzards! 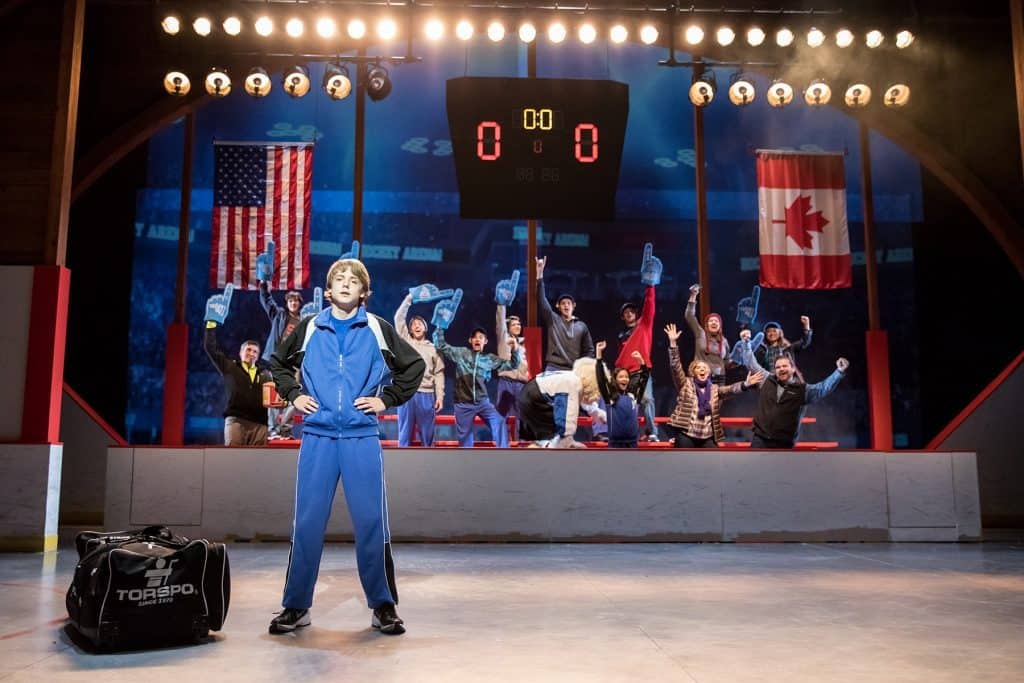 Henry Constable (Mitch Munson) and ensemble in The Abominables at CTC, photo by Dan Norman

This show reeks of my current home in the Brainerd lakes area. The team colors are even blue, white, and black like the Brainerd teams, and they have a B (for Blizzards) on their jerseys. I couldn’t help but chuckle at the behavior of the hockey moms, especially when Ellen follows her son Mitch into the boys’ locker room to make sure he has everything he needs for try-outs. I think most families can relate to the micromanaging mother, the intense father, the jealous siblings, and the over-emphasis on one thing. It could be soccer, academics, performing arts, or even church. It becomes the family’s identity. But, what happens when someone shows up to upset that plan?

Enter, the Yeti! I thought this was fun and it gives the show a certain fantasy element to a very realistic subject and touchy family dynamics. The new player, Harry (Ryan Colbert) is tall, strong, and athletic, a natural on the ice…because he’s a Yeti! He tries out for hockey because he wants to be part of something, to be a team member, and to have friends. In the meantime, he bumps Mitch out of his coveted role. Now what? As you can imagine, Mitch is crushed, angry, and tries everything to get his position back. 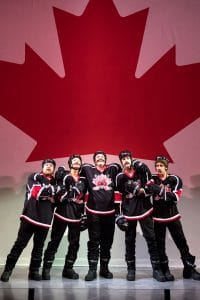 Of course, they needed to include a tournament against the Canadian team. Their song was one of the most humorous parts of the show. While the adults are preoccupied with the game and their boy players, the girls win their game (thanks for noticing, mom), and the little ones wander off.

Although it is a fantasy element, and I thought of the Yeti as more of a foundling, he is introduced as the adopted son of the new family. The script doesn’t handle the adoption element very well and there has been some controversy about it. Also, it would have been nice to see the parents rally around their daughters a little more in the end.

The Abominables is a show about family, sports, sportsmanship, friendship, learning how to graciously lose, and to embrace who you are and where your talents lie. It is directed by co-creator Steve Cosson and Choreographed by Joe Chvala. Fight and hockey choreography by Ryan Bourque. Set design by Andrew Boyce (it looked like our local hockey area). Costumes by Jessica Pabst, lighting by Jake DeGroot, Sound design by Sten Severson, Music Directed by Andrew Fleser. The late Michael Friedman wrote the music and lyrics, which is part rock and roll, part contemporary musical theater, and fully entertaining.

You can see The Abominables now through October 15, 2017 at the Children’s Theatre Company in Minneapolis, MN. It was fun to see teams, boys and girls, attend the show together. The little boy next to me was filled with wonder at the magic of theater and the storytelling.

Journaling Prompt: What’s your best activity/skill? Do you have a sibling who seemed to shine more than others? Was it you? How did your family maintain balance, or not?

The Plays the Thing