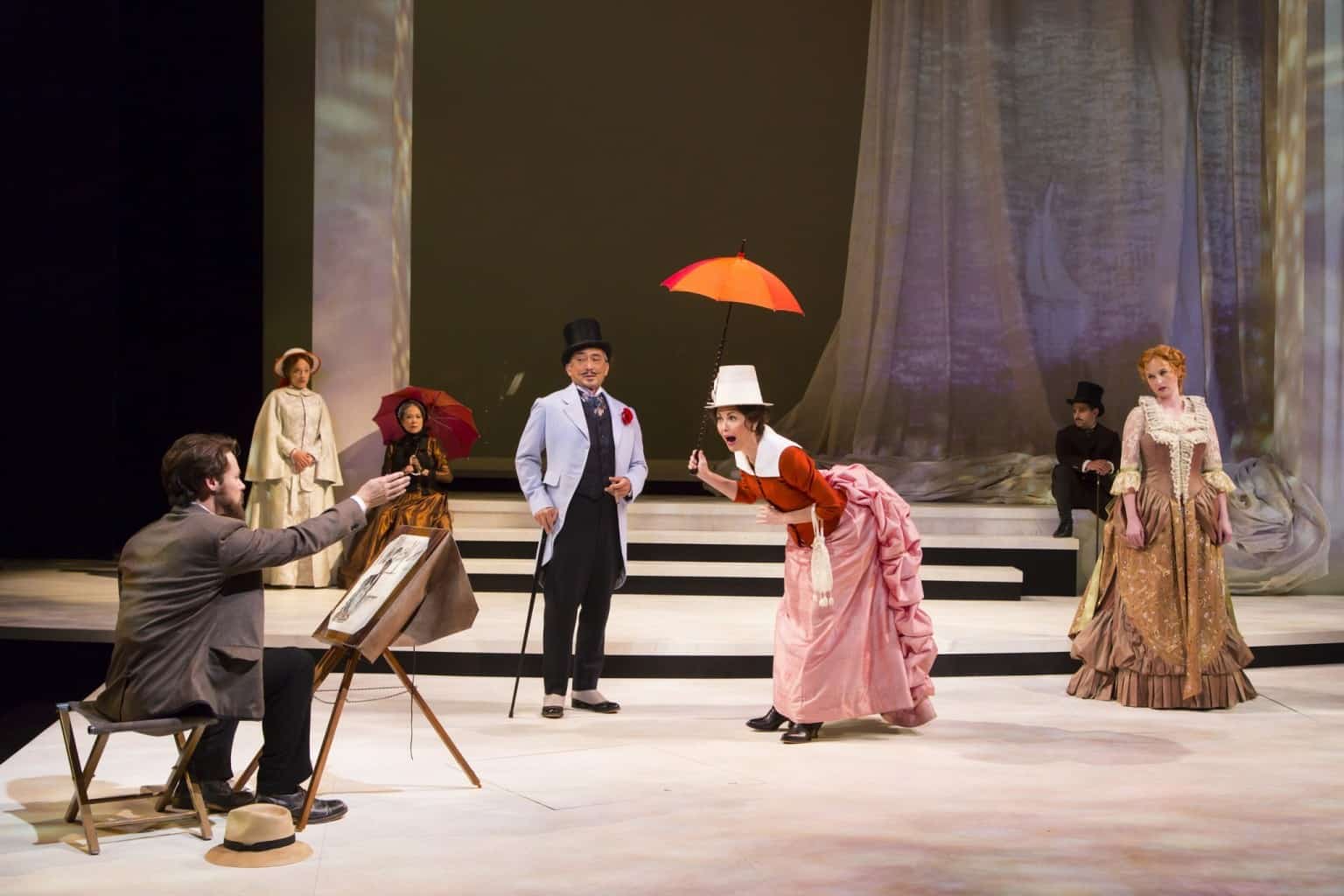 Quote of the Day: Why would I try to paint like everyone else? George, in Sunday in the Park with George. 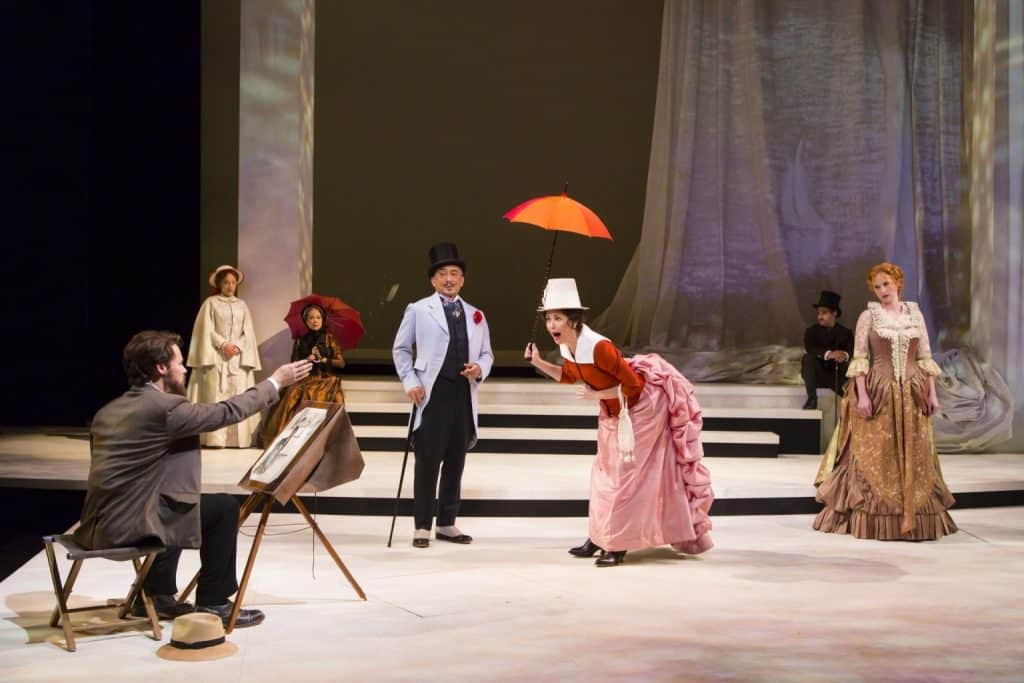 The cast of the Guthrie Theater’s production of Sunday in the Park with George, with music and lyrics by Stephen Sondheim, book by James Lapine, directed by Joseph Haj. Scenic design by Jan Chambers, costume design by Toni-Leslie James, lighting design by Jane Cox, projection design by Caite Hevner. June 17 – August 20, 2017 on the Wurtele Thrust Stage at the Guthrie Theater, Minneapolis. Photo by T Charles Erickson.

Director Joseph Haj and his cast, crew, and phenomenal orchestra have created an exquisite production of Stephen Sondheim’s Sunday in the Park with George at the Guthrie Theater. Everything about this show is complicated, and beautiful. We are watching an artist at work. In the opening number, George’s lover and model, Dot, sings “Sunday in the Park with George,” which is funny and clever. She’s standing there, posed and poised, yet filled with expression, as she sweats and sings, and inspires the artist. The first act is all about the people Georges Seurat put in his famous painting “A Sunday Afternoon on the Island of La Grande Jatte.” Sondheim and lyricist James Lapine gave the images a story, answering the question, at least in part, “Who are these people and what are they doing in the park?” 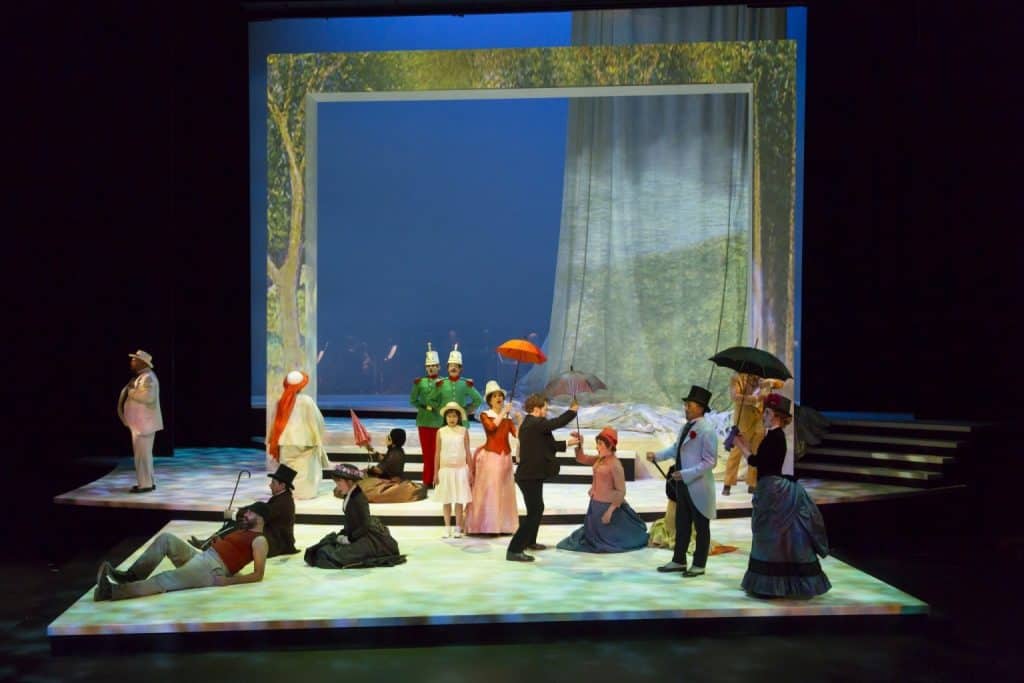 The cast of the Guthrie Theater’s production of Sunday in the Park with George, with music and lyrics by Stephen Sondheim, book by James Lapine, directed by Joseph Haj. Scenic design by Jan Chambers, costume design by Toni-Leslie James, lighting design by Jane Cox, projection design by Caite Hevner. June 17 – August 20, 2017 on the Wurtele Thrust Stage at the Guthrie Theater, Minneapolis. Photo by T Charles Erickson.

As Twin Cities Theater Blogger Jill (Cherry and Spoon) said, “Sondheim is the Shakespeare of musical theater.” You don’t catch everything the first time. This was my first time seeing Sunday in the Park. My sister once said that when actors bring in music for auditions, they are told not to use Sondheim. The music is too difficult to sight-read. It changes rhythms and keys, and while listening to this performance, I wondered how the singers could hear their cues. But, they did. Splendidly. Erin Mackey, who plays Dot, made it look, and sound, easy. She flits around on those high notes at top speed, especially in that fun opening number. She includes facial expression and body language to enhance the lyrics and character. Randy Harrison is George, who seems distant, hits all the sweet notes, and tells his story through his art and song. All the supporting cast give life to the frozen images in the painting. They all have personality, funny quips, gorgeous songs, and stunning costumes. It truly is a delight to experience Sunday in the Park with George at the Guthrie Theater.

The standing ovation goes to the excellent orchestra, conducted by Mark Hartman who also played the piano. People lingered in their exiting to hear the final note, then applauded them again. The orchestra rose to the challenge of Sondheim’s score. Bravo!

Sunday in the Park with George is about Georges Seurat, of course, and about the people in his painting. His life is as complex as his painting. He was a gifted artist, but he didn’t want to paint like everyone else. He had his own style and vision. He created “Pointillism (which Seurat called Chromo-luminarism), putting pure pigments next to each other in small strokes, resulting in a more luminous and shimmering color mixed by the eye.” (from the Guthrie program guide, by dramaturg Carla Steen) He studied light and color. He noticed small details. He followed his heart as an artist, and was shunned because of it. His paintings were hung in dark hallways and over bars, never featured, often rejected, and not purchased. He searched for connection through his art, but failed to achieve it emotionally with Dot, who was the mother of his child. She is just another dot in his painting. He’s closest to her when he can pose and shape her. He didn’t even try to connect with his baby. He died young, and Dot moved on to a relationship with another man. George says to Dot, “You say that I’m obsessed with my painting. I say that I’m immersed in it.”

I felt an underlying loneliness in this story and its music. So many people long to connect, but don’t know how. Some hide behind their art, or their work, and escape and distance themselves in many ways, from alcohol to isolation. Art connects us, and it can also consume us. We have the need to be our authentic selves and make art, or life, our own way, and yet, we risk rejection. Seurat created something unique and beautiful, but different, which inspired Sondheim to create something complex and stirring, which goes on to inspire those of us sitting in awe in the audience.

You can experience Sondheim’s masterpiece musical Sundays in the Park with George at the Guthrie Theater in Minneapolis, MN through August 20, 2017.

Journaling Prompt: What do you feel both brave, and frightened, about doing?

Cinderella Ticket Giveaway for The Children’s Theatre in Minneapolis

The Cemetery Club Shines at Cream of the Crop Theater