Review of King Lear at the Guthrie Theater 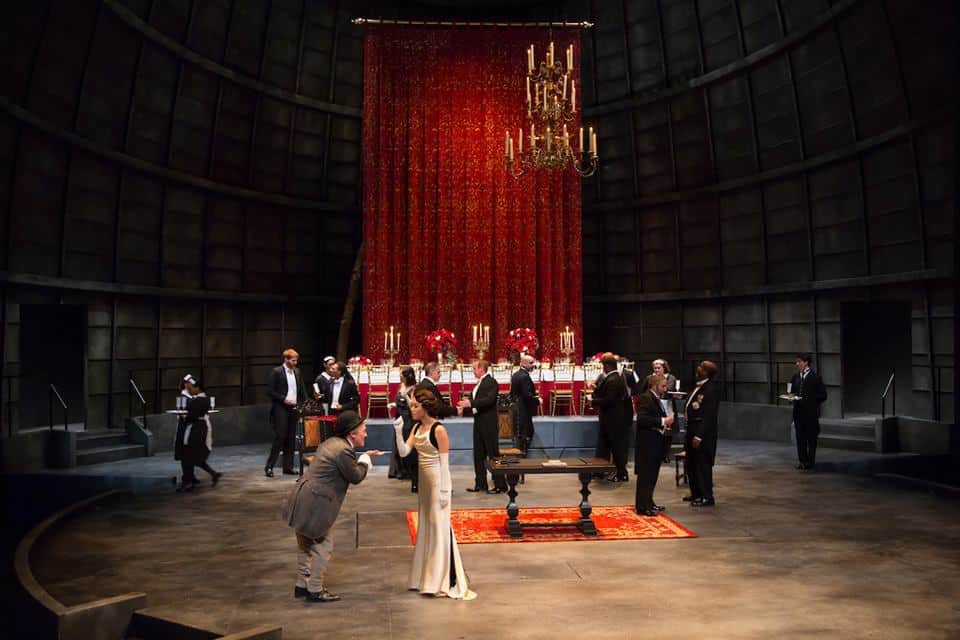 Quote of the Day: from William Shakespeare’s King Lear

Lear: Does anyone here know me? Why, this is not Lear.
Doth Lear walk thus? Speak thus? Where are his eyes?
Either his notion weakens, or his discernings
Are lethargied. Ha, sleeping or waking?
Sure ’tis not so.
Who is it that can tell me who I am?

Regan: O, sir, to wilful men,
The injuries that they themselves procure
Must be their schoolmasters. (Act II, scene 4)

King Lear said to be Shakespeare’s greatest work, a tragedy, grim and horrific, is playing on the Wurtele Thrust Stage at The Guthrie Theater in Minneapolis, MN through April 2, 2017.

Throughout the performance my eye was drawn to a bare tree on the set, leafless, lifeless, just the skeleton of its former life-giving self. My ears kept hearing the word “nature.” Oh, how nature blesses and curses. It gives us breath and nourishment only to be sucked away as age and dementia strip us bare. Who was Lear before the winds of change stripped him of his wits, his kingdom, and his children? That bare tree didn’t even have leaves lying on the ground. Where have its seeds blown? 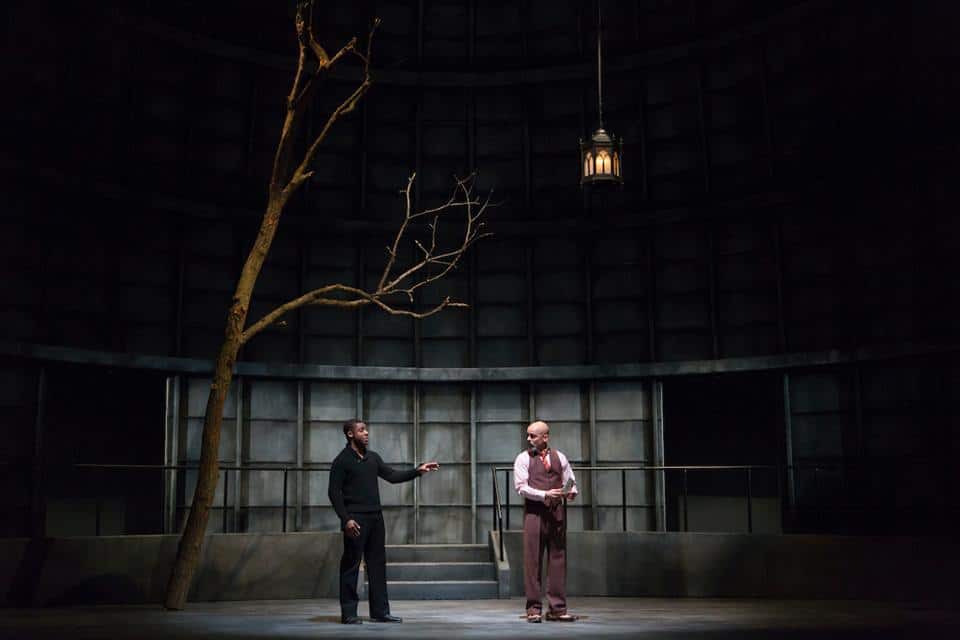 In the opening scene of King Lear, we are in the Great Hall of his castle. The feast is over, and Lear is basking in his greatness. He turns to his three daughters and asks them to publicly profess their love for him. The first two give flowery speeches, using all the words they know their father, the king, wants to hear. Then, his youngest daughter, Cordelia, stands up and says that she loves him as a daughter should, out of obligation and birth, nothing more, nothing less. He is so disappointed in her answer that he strikes her down and banishes her from his kingdom. The Prince of Burgundy no longer wants her because she’s been disinherited. The Prince of France whisks her away, and we kind of forget about her for the rest of the first half of the play, as everything else disintegrates.

The cast of King Lear. Kim Wong as Cordelia and Armin Shimerman as the Fool. Photo by T Charles Erickson

Meanwhile, her self-serving sisters are scheming. They are ambitious. They plot against Gloucester, his sons, their own husbands, and their King and father until the whole kingdom is at war, nature is unleashing its harsh storms, and Lear himself is reduced to rags and madness. 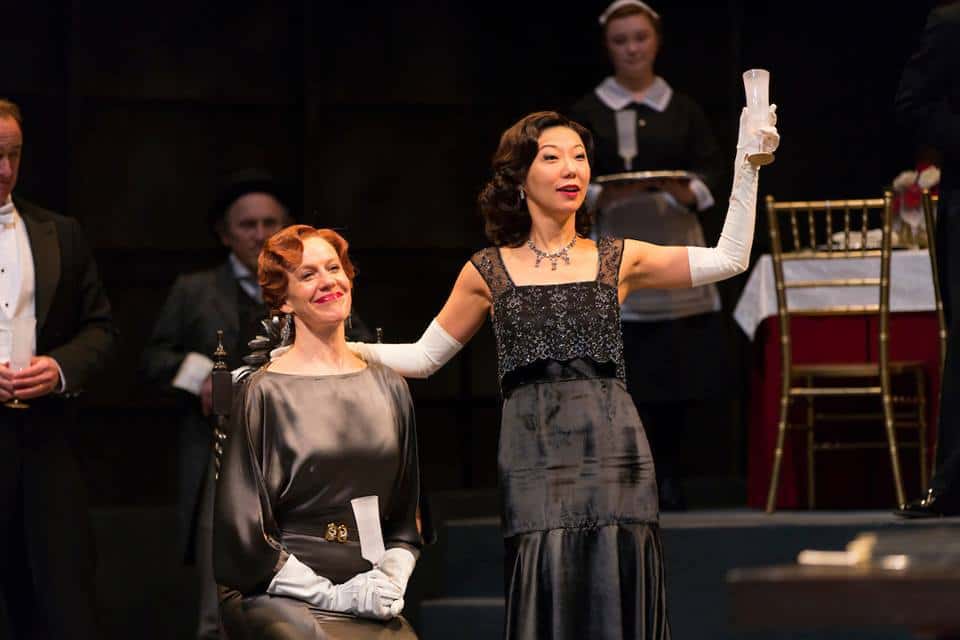 Kate Nowlin as Goneril and Sun Mee Chomet as Regan in the Guthrie Theater’s production of “King Lear.” Photo by T Charles Erickson

King Lear is a powerful, emotional play with challenging roles for the actors. I kept asking, “Why did Shakespeare 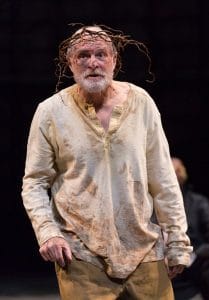 write this play?” It is so dark. King Lear is losing his mind, and the kingdom is falling apart. The predators are sensing his weakness and moving in. You see death, destruction, and careless cruelty. You don’t really get any good feelings, or hope, at the end.

It’s a Shakespeare tragedy, and the body count is typically high by the time the final scene ends. Shakespeare reflected on the times and circumstances of his life. He saw corruption, false portrayals, greed, the fall of nations. He knew about cruelty and violence. It’s all there on stage at the Guthrie. I have never experienced a performance that was so powerful and gruesome. This is not a show for young children or the highly sensitive. 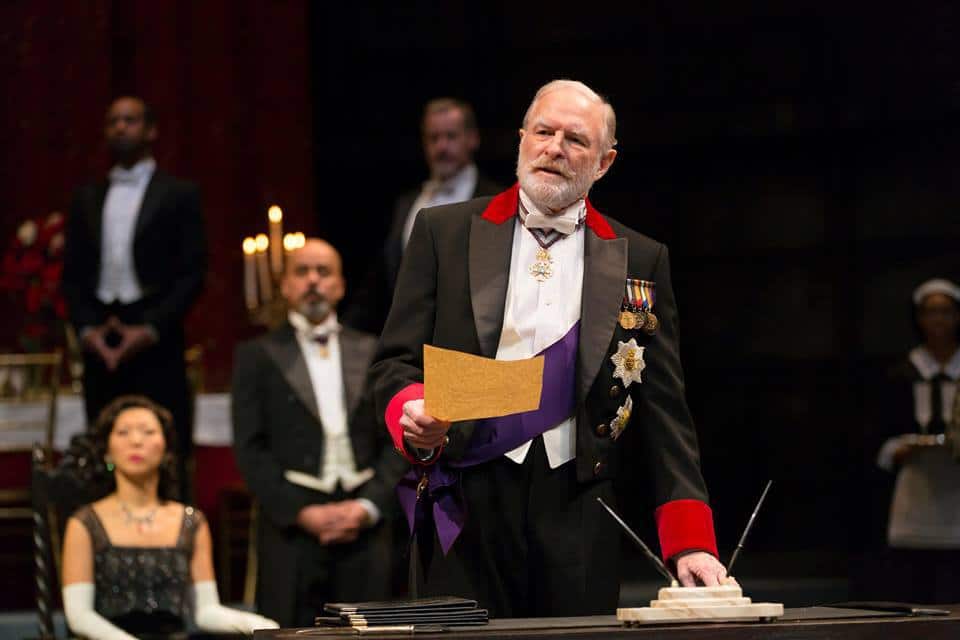 I was in the audience on Saturday night, Feb. 18, 2017, which was Opening Night for Nathaniel Fuller who is playing King Lear. He is alternating performances with Stephen Yoakam in this iconic role, which must be both exhilarating and exhausting. For performances where they do not play Lear, they play the Old Man. The Old Man and Lear are not on stage together, so they don’t watch each other as Lear, unless they chose to watch the monitor. They play Lear in their own way, under the expert direction of Joseph Haj. 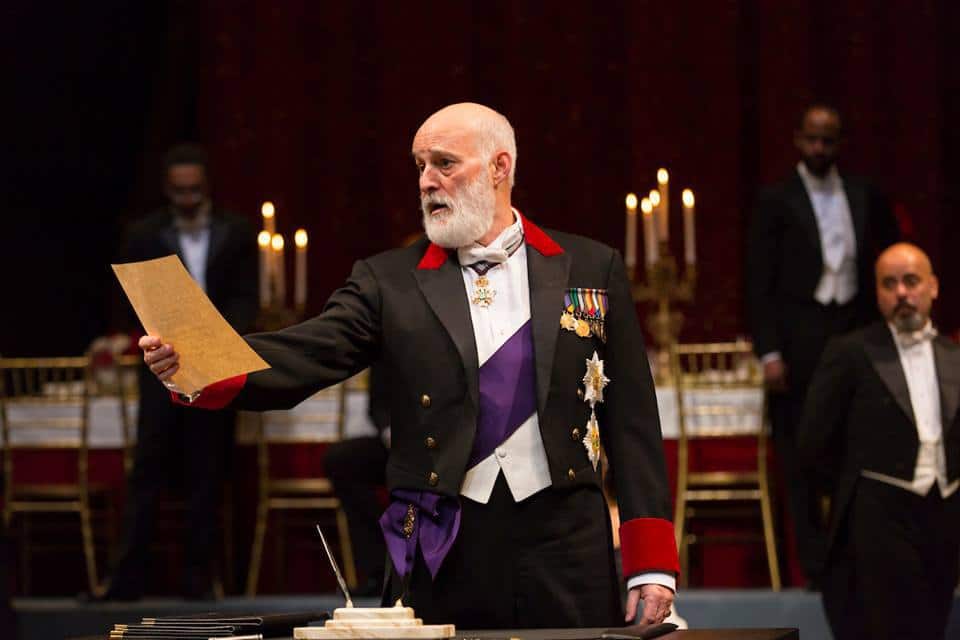 The Guthrie Theater’s production of King Lear is populated by a star-studded cast, with credits of numerous plays in the twin cities, Broadway, film, and television. You will recognize Armin Shimerman who plays the Fool/Messenger/Herald from his role as Quark on “Star Trek: Deep Space Nine” and numerous other roles in film and television. His portrayal of the Fool was my favorite character/part. The show is stunning. Victor Zupanc is the composer, and his music creates eerie atmosphere. The costumes, especially for the sisters, are gorgeous. In the royalty/castle scenes, they are dressed like wealthy aristocrats. In the forest, characters like Edgar (played brilliantly by Jason Rojas) are dressed in rags and reminded me of Golem in the Lord of the Rings. The soldiers look like they’re wearing fatigues from WWI or WWII. It gave me the sense that this story is timeless. It reflects Shakespeare’s own times, the Elizabethan era, has references to the world wars of the last century, and the insanity of leaders in modern governments. 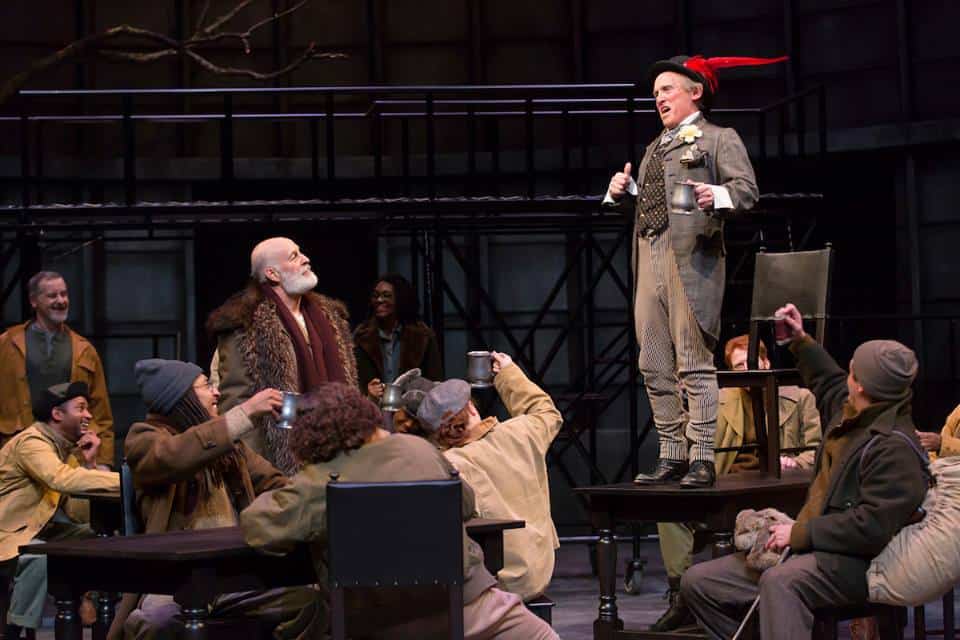 Armin Shimerman as the Fool and Stephen Yoakam as King Lear in the Guthrie Theater’s production of King Lear. Photo by T Charles Erickson

You can see King Lear on stage at the Guthrie Theater in Minneapolis, MN through April 2, 2017.

Journaling Prompt: Are you a Shakespeare fan? Which of his plays are your favorites? 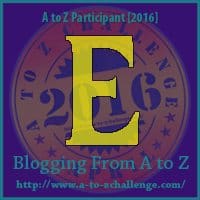 E is for Expectations, IWSG April 2016 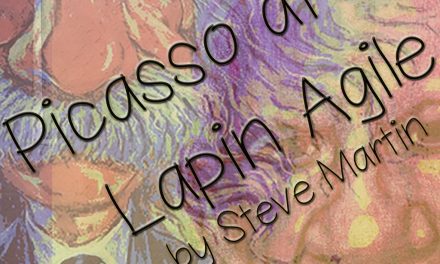