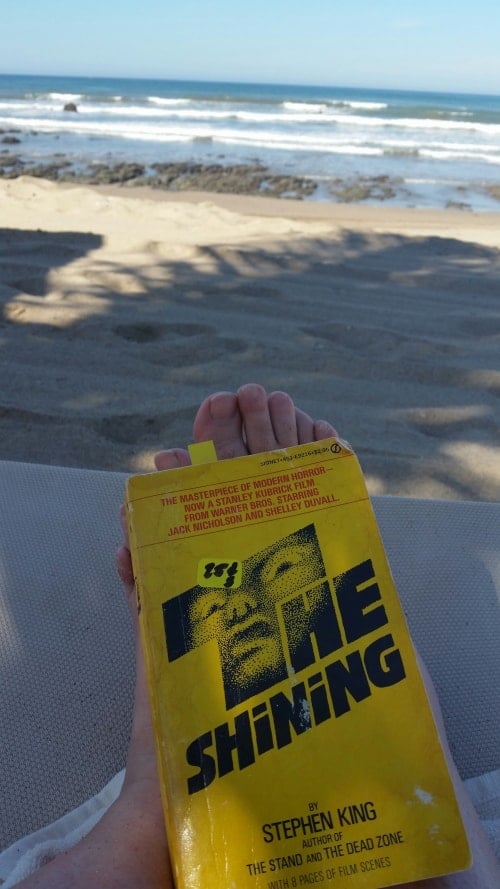 Quote of the Day: “Few men ever return from the fabled Wagon, but those who do come with a fearful tale to tell. When you jump on, it seems like the brightest, cleanest Wagon you ever saw, with ten-foot wheels to keep the bed of it high out of the gutter where all the drunks are laying around with their brown bags and their Thunderbird and their Granddad Flash’s Popskull Bourbon. You’re away from all the people who throw you nasty looks and tell you to clean up your act or go put it on in another town. From the gutter, that’s the finest-lookin Wagon you ever saw, Lloyd my boy. All hung with bunting and a brass band in front and three majorettes to each side, twirling their batons and flashing their panties at you. Man, you got to get on that Wagon and away from the juicers that are straining canned heat and smelling their own puke to get high again and poking along the gutter for butts with half an inch left below the filter.” from Stephen King’s The Shining. 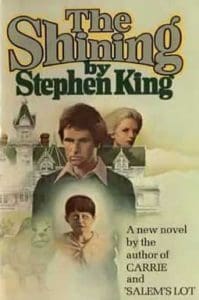 Original book cover for The Shining? Before Jack’s face and the movie!

Stephen King truly is the King of Suspense, a Master Storyteller. I started out the new year reading outside of my normal genre. I am not a horror fan. I scare too easily, and I have a vivid imagination, so reading descriptions the likes of which King creates, gives me nightmares. So, why did I read The Shining, especially while on vacation to sunny Mazatlan? Well, because it was sunny, for one thing. Scaredy-cats like me can’t read a book like that while being trapped in the snowstorms and bitter cold of Minnesota! I thought I’d be okay if the sun was shining….Shining.

I also heeded the warnings at the beginning of the book, snippets from reviews circa 1977, when the book first came out. “Be prepared to be scared out of your mind…Don’t read this book when you are home alone. If you dare- once you get past a certain point, there’s no stopping.” Abilene Reporter News. And, it’s true. King has a way of writing characters, setting the stage, and creating such suspense that he grabs you by the throat, not giving you a chance for a clear breath until you read the conclusion. If the story was just about Jack, his alcoholism turned sadistic, and his terrified wife, it wouldn’t be nearly as captivating. It’s Danny, their five-year-old son, who has the Shining and an invisible friend Tony who gives him warnings, dreams, and messages. Sometimes, they’re good, like “You’re going to the amusement park today with your dad.” Sometimes, they are horrible images of death and violence. Some of them come true, others don’t. As you’re reading, you see moments where they could turn back. You’re screaming at the characters (in your head. People might think you’ve lost your mind if you’re yelling at an old, yellow book on the beaches of Mazatlan, and they’ll come to take you away, ha ha.) willing them to listen to Danny. To stop their nonsense.

While I was reading it, a few bees swarmed around my poolside lunch (fish tacos and shrimp cocktail, every day!), the couple we met were both nurses (Jack’s abusive father was a nurse), and the hotel started to seem larger and creepier. In one scene Danny sees the fire hose come alive and snake towards him. The next morning, I went down for breakfast and saw this! 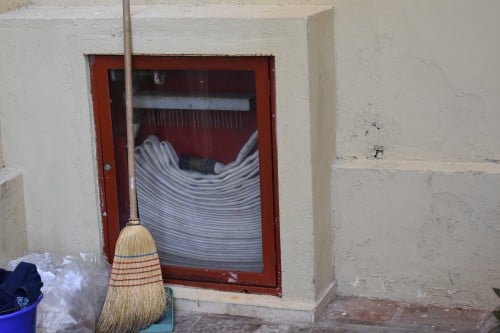 The real reason I read The Shining was because the MN Opera produced this story into an opera last year! I thought, What, a horror novel as an opera?! I wasn’t able to make it to the performances. My kids had a jazz band concert on press night, but I asked another Twin Cities Theater Blogger what she thought of it. She said that she’s not an opera fan, had never been to one, and was skeptical that she’d even like that art form. She said she was riveted to the story. The music was amazing, the actors/singers superior, and the kid was stunning. She said that on press night they 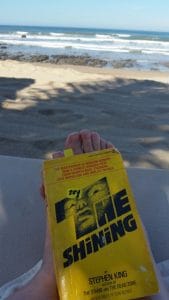 A paperback copy I found at the church garage sale (of all places). That yellow, and Jack’s face!

could use their phones to tweet and promote the show, but very early into the performance, the phones disappeared and everyone just watched, listened, and got swept away. I had to read the story that could produce such strong reactions.

Also, Stephen King is an author to study and learn from. His memoir/craft book On Writing is one of the best. He talks in there about creating magic. When he imagines something, writes it, and then someone, maybe 40 years later, reads it, we are seeing the same image! To write a book that people still get lost in 40 years later is masterful. It kept my attention through the sunny days and the long journey home, two plane rides, long-long lines through the airport and customs, a passenger with a hacking cough one seat away from me on the plane, crying kids in front of me, screaming children behind me, an anxious travel partner, all those germs (!), the threat of terrorism, a shooting at the airport in Fort Lauderdale still fresh in our minds, and worry about when you’ll get to use the bathroom next. Truly, the real world is far scarier than anything even King could write. Reading his horror novels is an escape.

If you want to read something by Stephen King, but don’t want the horror, try 11/22/63 (that’s the title) historical fiction that includes time travel. The main character goes back in time to try stop the assassination of President John F. Kennedy. It’s a long sucker, but well worth your time. The reader for the audio is excellent. Years ago, I read his collection of short stories Different Seasons that included Rita Hayworth and Shawshank Redemption, The Body and Apt Pupil, again, creepy and mind-blowing, but not as graphically violent. All three were made into movies. Actually, we listened to Shawshank on audio, also exceptionally read.

On my way down to Mazatlan, I read Ascension by Hannah Rials, also outside my usual reading selections. Here’s my review on Goodreads. It’s more of a YA novel: 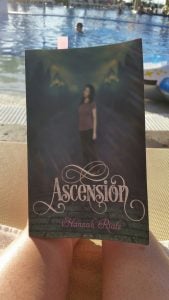 Ascension by Hannah Rials is a terrific read. You have within the 248 pages, a heroine to root for, enough mystery to keep you turning pages, a little romance, a whole lot of soul-searching and identity crisis, mixed with racial tension, albeit in this story the races are Witches and Vampires. Now, I’m not one to pick up a vampire book. I started reading Dracula back in my early 20’s and quickly abandoned it. Way too dark for me. I didn’t even watch Buffy the Vampire Slayer, nor did I read the Twilight series (gasp). A friend handed me this book, said it was YA with a little mysticism, teenage angst, and mystery. “Okay,” I said, “I’ll give it a try.” I read this book on a plane trip to Mexico, and it kept me engaged through the whole journey, plus another day of poolside reading. I am anxious for the sequel!

PS: I have never watched the movie The Shining. If my honey will sit close and hold my hand, I might watch it some day. A sunny day. Not winter. And, not before I go to bed!!!

Journaling Prompt: What are you currently reading? Ever read something outside your normal book shelf?

F is for French-Inspired Cuisine