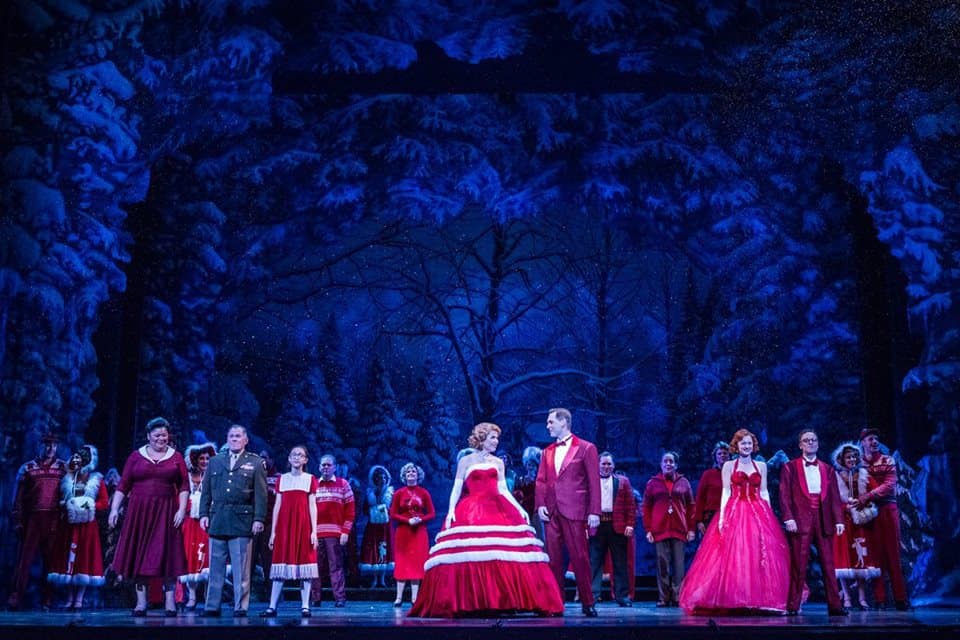 Quote of the Day: Irving Berlin’s White Christmas is a magical musical. from the Artistic Director/Choreographer himself, James Rocco. And, he truly knows how to create that magic. Watching White Christmas on stage at the Ordway Performing Arts Center in St. Paul, MN was like watching your snow globe characters come to life. To add to the snow globe magic, fresh snow was falling on the twin cities, causing a few traffic problems along with its romantic effect. (Don’t worry, Mom, we got home safely, although slowly.) The cast and crew of the Ordway exceeded expectations on costuming, set design, choreography and casting. Dear Santa, could you please bring me one of those darling pink polka dot dresses?

Confession: I like the movie White Christmas, but it is not my must-see holiday movie, and I don’t have it memorized. So, I won’t be the reviewer to turn to for comparisons. Please see postings by other Twin Cities Theater Bloggers, and especially Jill at Cherry and Spoon for those details. I do know the movie enough, however, to have noted a few changes in the music, but not enough to scare anyone away. In fact, I liked them. Any show that has I Love a Piano has my heart. Staged in a nod to Charles Schultz and his character of Schroeder at the short-legged grand piano, actors Brian Sostek and Jenny Piersol cast a spell of their own as they danced and sang their way through this song, accompanied by the exciting ensemble dance troupe. 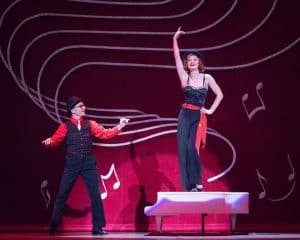 White Christmas is brilliantly cast by mostly local talent, and James Rocco shines as a choreographer. All the dance numbers are exquisitely done, a visual feast of the eyes, exciting, sultry, and delightful. The costumes are absolutely dreamy. I love the addition of the character Martha, played by the stunning Thomasina Petrus, as strong, charismatic, and a powerful singer. (Martha doesn’t sing in the movie.) The little girl, Susan, is adorable, a scene-stealer for sure, but in a good way. She has energy and heart, and gives the grown-ups pause. When Bob Wallace (played divinely by Dieter Bierbrauer) sings to her Count Your Blessings instead of Sheep, I think we all got a little misty. 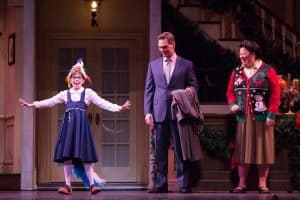 The superb Ann Michels plays Betty Haynes with such style and charisma that we could barely take our eyes off her. She has the voice, the moves, the stage presence that brings a show to excellence. From the audience response after each number, and the standing ovation at the curtain call, clearly she is a Twin Cities’ favorite. 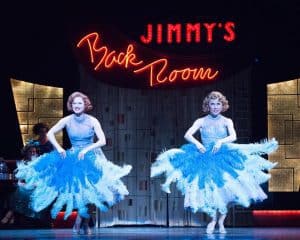 If you’re anywhere near The Ordway in St. Paul this holiday season, you no longer need to be dreaming of a White Christmas. Mother Nature’s got you, and most of Minnesota, covered. James Rocco and the cast and crew of this holiday classic will handle the rest!

Review of The Color Purple at Park Square Theatre in St. Paul, MN

Y is for Yogurt