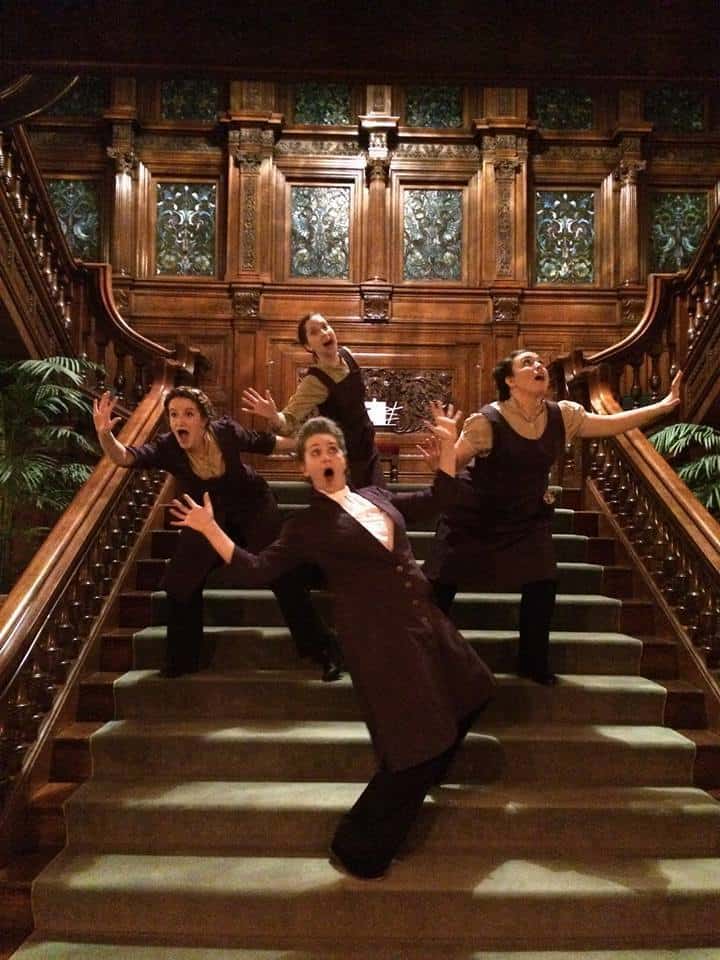 Quote of the Day: A few choice lines from Moliere’s play Tartuffe, translation/adaption by Prudence Steiner, produced by the Wayward Theatre Company at the James J. Hill House in St. Paul, MN, a perfect setting for this play about rich fools and the charlatan’s who woo them.

You respect a mask as if it were a real face.

You’ve been dazzled by his pretentious behavior

Infuriating people is my greatest joy.

There’s a wolf in gentleman’s clothing, and he’s living right here in the big house, eating our food, sleeping in our beds, seducing our women, and beguiling our men. Even though some of the members of the household, namely the maid Dorine (Samantha V. Papke), fearlessly point out the charlatan’s flaws, Orgon (head of the household, played by Leif Jorgensen) won’t hear a word of it. In fact, he’s so enchanted by Tartuffe (Tim McVean) that he’s planning to give his daughter Mariane (Amy Vickroy) in marriage to him, against her wishes. Mariane is in love with Valere (Avi Aharoni), a kind and respectful man, but not nearly as charismatic and clever as Tartuffe. Dorine works over her employer Orgon, speaking candidly, and bravely, about Tartuffe’s false front, to no avail. Orgon is completely hoodwinked. He’s not convinced when his wife Elmire (Sarah Nargang) describes the jackal’s advances, telling her she’s over-reacting. Even his brother-in-law Cleante (Lucas Gerstner) can’t convince him, although he is given beautiful language to work with. He speaks of love. He explains that a true and genuine leader doesn’t brag about his accomplishments and flaunt his power. Instead, he is servant to all, calm, respectful and kind, leading by example,not threats.

The Wayward Theatre Company, founded by three Augsburg College graduates, Sarah Nargang, Tim McVean, and Michael Kelley, creates plays in non-traditional spaces. “We believe strongly that a play is directly affected by the space and we strive to challenge the traditional approach to staging.” They’ve produced their plays in hotels, night clubs, Minnesota’s Fringe Festival, and now at the historic James J. Hill House in St. Paul, MN. The railroad baron’s mansion is the perfect setting for this play. As an audience member, I felt like I was a mouse in the corner, watching this family feud and fumble, fall apart, and finally see the truth. 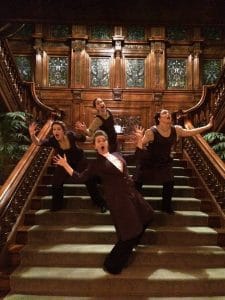 Maids on the staircase. Tartuffe at the James J. Hill House, photo by Gillian Randall

Director Michael Kelley staged the show in three main floor areas of the museum mansion. We begin in the foyer/great hall, watching the actors descend and ascend the staircase, come out from behind corners, through doorways, and air their family’s dirty laundry as we quietly observe. Then, we’re hurried into the receiving room, which they turned into a dining room. Chairs are set up in each location, and the audience was quick to catch on to getting up and moving, changing places, and following the directions of the actors. The second act begins in the music/art room where we are surrounded by an interesting display of paraphernalia and posters from a 1968 Eugene McCarthy campaign. The play concludes back in the Great Hall where Mme. Pernelle (Julie Hutchinson Driver Bolton), matriarch and mother of Orgon, still is not convinced that Tartuffe is a bad man until they family is in danger of being forced out of their own home.

What does it take to convince some people that they are being duped by a crooked hypocrite? No amount of convincing and explaining bad behavior seems to make a bit of difference to the spellbound. People see what they want to see, hear what they want to heard, and believe what they want to believe. It’s not until they witness with their own eyes and ears the wicked ways that they finally admit they were wrong, and often that’s too late.

Tartuffe by the Wayward Theatre Company is a unique and engaging theatrical experience. You are immersed in the play as you sit in the same rooms as the actors, so close you could almost touch them. You can hear every sigh and see the slightest eye movement, and they can see and hear ours. I find it fascinating to experience theatre in unique ways. It inspires me to Play off the Page.

You can see Tartuffe at the James J. Hill House through November 19, 2016. It’s a way to see this historic mansion in a whole new light, and experience this play in a whole new way. Thanks, Wayward, for the press invites to view and review your fine performance/theatre experience!

Journaling Prompt: Have you ever tried to convince someone that a person they think that they know and trust is not what he seems to be? 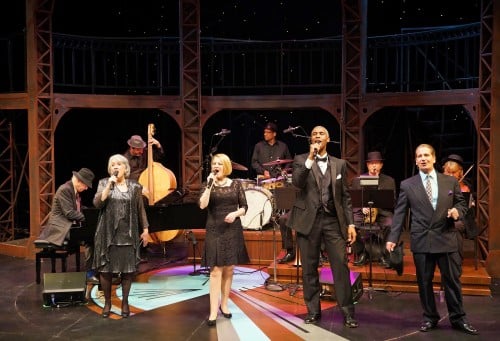 Review of The Soul of Gershwin at Park Square Theatre

H is for Huskies