Quote of the Day: Maybe This Time… wistful song sung by Sally Bowles in Cabaret

In here, life is beautiful. The girls are beautiful. Even the orchestra is beautiful! Emcee in Cabaret. Come in, he says, Leave your troubles outside the door.

November 20, 1966, Cabaret was the bold, new show opening on Broadway. Based on the 1939 novella Goodbye to Berlin by Christopher Isherwood, which was adapted to stage and film under the title I am a Camera by John Van Druten, then re-imagined as a musical by the celebrated musical force of Kander and Ebb and book by Joe Masteroff, Cabaret was a huge hit, despite worries from creators and producers alike that it would be too controversial. Just look at the picture (above), the lady dancers spend most of the show in their underwear performing very suggestive dance moves. The Emcee himself is a character of questionable morals (especially for the times), the leading man is bi-sexual, and the charming, yet tragic, Sally Bowles (Andrea Goss) does what she needs to do to survive in a very dark world. The setting is 1929-30 in Berlin, Germany. The political climate is turning dark and suffocating. Bricks are being thrown through the shop windows of Jewish merchants. Sally is longing for something better, Maybe this time. The Emcee (Randy Harrison) beckons us into the Kit Kat club with the suggestion that maybe tonight we’ll see more than we came for. And, Cliff Bradshaw (Benjamin Eakeley) is the American writer, looking for an escape of his own, searching for his own identity, what kind of love he truly needs, and inspiration for a story. 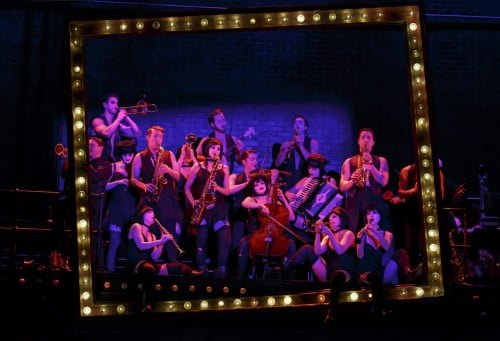 Some of you might already know the story. I did not. This was the first time I saw it performed live. I had only watched the movie, years ago, starring Liza Minnelli as Sally Bowles, and I kept thinking, this seems like a different show. And, it was. The movie varies from the original script. Sally is an American. The love triangle is between the club owner, her, and the Emcee (I think). This production is a slightly different story line and has an ending that surprised me. My friend Rachel and I wondered how the show was received in 1966. Mentioning homosexuality in any way on stage was taboo, and Sally’s character would raise many eyebrows and judgement. I love this quote in our press kit from Richard Watts Jr. in the New York Post, 1966, “It is the glory of Cabaret that it can upset you while it gives theatrical satisfaction.” Or, in a modern day word savvy tweet that I sent out. “Fun show, yet sobering.”

What are the take-aways from the Roundabout Theatre Company’s production of Cabaret? It still has some shock value and eyebrow raising scenes. The story grabs at your throat, at times, and stops you from breathing. The characters are flawed and complicated, endearing and tragic. The actors’ voices are powerful and filled with emotion. The dancers are amazing performers, shifting from bawdy dance numbers with cigars hanging out of their mouths to play French Horn, Violin, or any other instrument in the band, which is also on stage in an upper level. The above image of them playing in the lighted frame was one of my favorite moments of the performance. It happened as Act II was beginning, right after I was the woman pulled from the audience and asked to dance with the Emcee. He was smooth, slick, and a little naughty. Rachel said she would have snapped a picture, but photography was forbidden in the theatre! Thanks, Randy, for picking me. You are spectacular!

Thank you Hennepin Theatre Trust for the press invites. This was my first time viewing and reviewing a performance at the Orpheum in downtown Minneapolis. The theatre is gorgeous, very ornate, and gives you an old-theatre feel. My first words when I sat down after the dance with the Emcee, were, “I should have dressed nicer.” We ate at Rock Bottom Brewery across the street before the show, on suggestion by another Twin Cities Theater Blogger. Rachel and I had a fantastic night on the town (and on a school night, at that)!

You can see Cabaret at the Orpheum in Minneapolis through Sunday October 23, 2016, or on tour. Check tickets and showtimes, more photos and video at Hennepin Theatre Trust or Roundabout Theatre Company, Cabaret Musical.

Go. Create. Inspire! Maybe this time we can create a better world.

Journaling Prompt: Who do you see as the outcasts of our society today? How do you think they’re able to survive? As Fraulein Schneider sings in her song, as she’s rejecting her Jewish fiance’, “What would you do?”