Review of The Snowy Day, and other stories by Ezra Jack Keats, at CTC

Quote of the Day: One winter morning Peter woke up and looked out the window. Snow had fallen during the night. It covered everything as far as he could see. from The Snowy Day by Ezra Jack Keats, one of my favorite children’s books. You can now see this story, and more, brought to life as only the Children’s Theatre Company of Minneapolis can do. 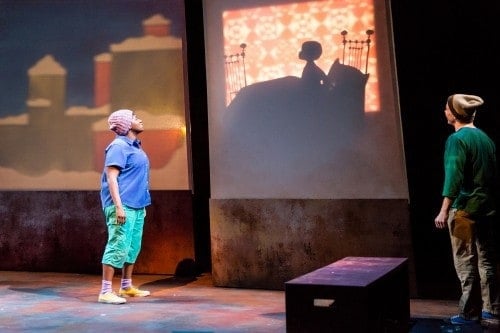 Artistic Director Peter Brosius partnered with renowned shadow puppetry artist Fabrizio Montecchi to create these stories with a mix of three adult actors playing the various parts, and an incredible use of light, projection, and shadow puppets. It was fascinating to watch. During the story A Letter to Amy, a very important invitation is swept up by the wind and carried off, as the boy tries desperately to retrieve it. Sometimes, the actors are in front of the screens and backdrop, acting out scenes. Then, they disappear behind the screens and the puppet images appear. Sometimes, they’re in front of the screens, and the lighting shifts and is now projecting back onto the screens, in a very clever placement of the set pieces. When the letter gets away from the human actor, it is carried on a stick held by another actor. The light moves around, and suddenly both the boy and letter are twisting and turning and growing larger and soon the images are on the walls to our right, back, and left. I can only imagine the careful choreography that had to happen to make all of this work. Music (sound and design by Victor Zupanc) and dialogue are interwoven into the acting and images to create a feeling of living inside the book. What a dreamy experience. 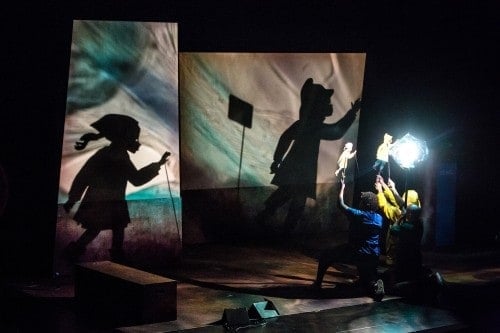 “A Letter for Amy” the windy day, and animated puppet imagery. CTC. Photo by Dan Norman

Last week, I was invited into a creative writing class for high school students to talk about blogging, and writing for children, specifically puppet shows. I talked to them about different types of puppets. My characters Millie and Willie Cottonpoly are sock puppets. And, we also talked about what types of stories work for children. (They will be writing puppet plays for the preschool class.) “What do they care about?” I asked. The kids said, “Food, family, friends.” Yes, all those things. They worry about change, starting a new school or class. Birthdays are very important! Stories that work well for kids need well defined characters with strong personality traits. They need action, usually right away, and to quickly establish the problem, and good dialogue. We need characters we can relate to, that we like, and want to root for them throughout the story. The great children’s book author and illustrator Ezra Jack Keats perfected these techniques, which is why we’re still reading and buying his books today, and I suspect, why the team at The Children’ Theatre Company in Minneapolis chose to bring his stories to life on their stage. He was also the first to use a non-white child in his stories, stating, “All children deserved to see characters in books that looked like them.” The kids in the audience laughed, squealed, answered questions (not necessarily posed to them), sat on the edge of their seats, and whistled as Willie (in the story) was trying to learn how! It was a delightful experience. Afterwards, the actors sat on the edge of the stage and talked to the kids and showed them how the shadow puppets work. They could also play with some in the lobby and take pictures with various sets and characters. 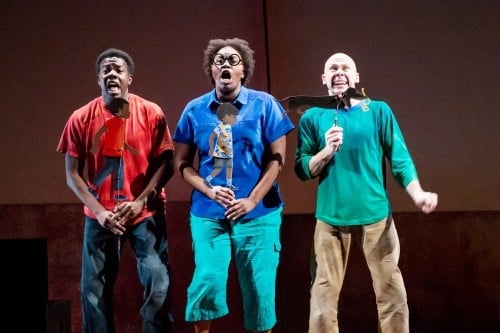 The Snowy Day and other stories by Ezra Jack Keats is playing at The Children’s Theatre in Minneapolis, Feb. 9 – March 20, 2016. Recommended for kids in Kindergarten and up. I thought most of the preschoolers in the audience were engaged in the show. It runs about an hour with no intermission.

Journaling Prompt: What’s your favorite winter time activity? Did you practice making tracks with your toes pointed out, then pointed in? How about snow angels and sliding down hills? If you’ve never been in snow before, what would you like to do?

J is for Jokes